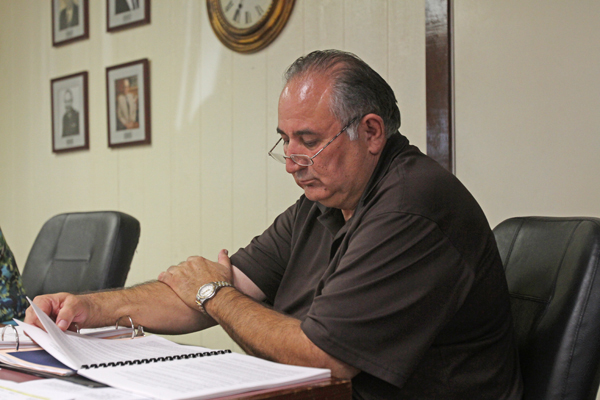 A routine council meeting last Thursday saw council members and the mayor address a mix of topics, ranging from guns at City Hall to city infrastructure woes. Little action was taken, but many council members made requests for upcoming topics.

Council convened into executive session at last Thursday’s meeting to discuss personnel issues related to the city manager job opening. Days later, Mayor Manuel “Manny” Baeza told The Big Bend Sentinel that the city has now reached out to more of its original applicants to set up interviews; the council is currently scheduled to meet with a new candidate Monday and carry out second-round interviews for two candidates, John Washburn and Jesus “Chuy” Garcia on Wednesday.

The city manager job listing is still open to new applicants, and the city will continue to accept applications until they have a finalist, according to Baeza.

Councilmember Buck Johnston questioned the mayor over “no gun” signs that had disappeared from the walls of City Hall.

“We removed them two weeks ago after the El Paso shooting,” Mayor Baeza said. As Johnston protested and requested an agenda item about returning the signs to their former positions, city accountant Dan Dunlap explained that the signs had previously been hung without council action. The council will have to decide going forward whether guns will be permitted within City Hall. Guns are still not permitted in the municipal court, which resides within City Hall premises.

Councilmember Raul Lara was granted his request for a workshop to specifically address the city’s ailing water system. Lara told council members that if they could see how badly the infrastructure was leaking, they would spring to action. Rather than a workshop at City Hall, council members will go on a guided tour to address the “serious problems” that have been identified.

Concilmember Natalie Melendez pushed forward a conversation to lower traffic speeds near Cordero Park, located along US 67, south of the four-way stop. Marfa resident and County Justice of the Peace David Beebe, urged council even further, saying speeds should be lowered at every side of town where people enter.

Because development has expanded north on Highway 17, east and west on Highway 90, and south on 67, the current speed limit decreases into town don’t drop before reaching any of the town’s three trailer parks and residential areas.

Council will pursue a conversation with Texas Department of Transportation’s local engineer Chris Weber to see what is possible.

Councilmember Yoseff Ben-Yehuda has requested proposals for a comprehensive street plan for Marfa.

Submitted proposals will look at current conditions, securing funding, what kind of scopes they want to develop and, importantly, explain a plan to maintain streets long term “so we don’t end up back where we are,” Ben-Yehuda emphasized.

The city is planning to once again raise the property tax rate, and the first public hearing for the new rate took place before the Thursday regular city council meeting. The 7.89% tax increase for Maintenance & Operation costs is just below the maximum, 8%, which would trigger an automatic election where citizens could vote down the tax increase.

The proposed tax rate also exceeds the “effective tax rate” which is the tax rate that would keep the city’s tax revenue at the same rate as last year. Because the newly proposed rate is higher, the city will collect an additional $28,474.56 from Marfa property owners this year, adding a little extra money to the city’s coffers.

“That’s a step we’ve taken at the city for the past 10 years,” city accountant Dan Dunlap said of the increase being higher than the effective rate. “It gets the taxes high enough that it takes the pressure off of us to increase our utility rates.”

Chip in for EMS

In rural Presidio County, services often extend far distances and resources are sometimes scarce. The City of Marfa pays the county $50,000 to maintain the local airport and more to handle dispatch services for the city’s local police force and emergency medical services each year. Now, Marfa is asking the county for a chunk of change for a service they provide.

The Marfa EMS department provides rapid response for the city’s residents, but also responds to calls beyond city limits. Calls to 911 in the north part of Presidio County get routed to Marfa’s emergency services. Now, the city hopes the county will contribute $45,000, and council will send a representative to request those funds during the county’s budget meeting this afternoon.

City Accountant Dan Dunlap said the ongoing $50,000 yearly contribution to the airport “is going to greatly increase y’all’s chances when you go to the court,” and City Attorney Teresa Todd agreed that it would be a handy bargaining chip.