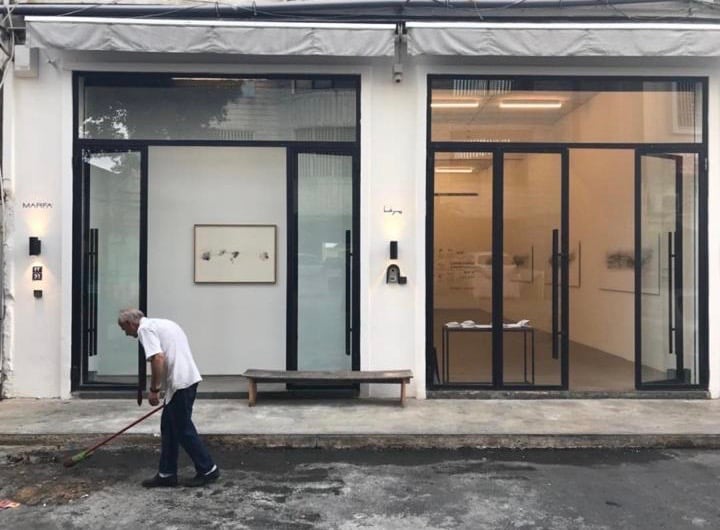 After the August 4 Beirut explosion, Marfa’ Projects, a gallery in the Lebanese city, experienced significant damage. But financial assistance from Marfa, Texas provided a lifeline and a “beautiful sense and comfort that we are not alone,” the Beirut gallery owner said.
Subscribe

BEIRUT — On August 4, an explosion in the port of Beirut rocked an entire city. Homes, shops and international commerce were destroyed in a single flash, as the unstable storage of chemicals appears to have caused a disaster that left at least 181 people dead and countless livelihoods in disarray.

The following day in Marfa, Camp Bosworth and Buck Johnston got a ping. News about Beirut’s accident began appearing in Google Alerts emails for the keyword “Marfa,” and the local pair wondered why.

In Arabic, the word “marfa” means port. And planted in the Lebanese port where a tragic disaster took place, was a local art gallery named Marfa’ Projects.

Bosworth and Johnston, gallery owners in Marfa, Texas, were taken by the story of a little gallery across the globe that had been wrecked by the blast. “We sort of put ourselves in that position being a gallery and how we represent so many artists and what kind of impact that must have had for them,” Johnston said.

Marfa’ Projects is a gallery that supports local Lebanese artists situated less than half a mile from the epicenter of the explosion in Beirut. “The gallery was severely hit,” said Joumana Asseily, the owner and founder of Marfa’ Projects.

“Luckily we were not there,” she said. They had closed their doors earlier that week as the country was going back to lockdown for coronavirus. “I can’t imagine what would have happened otherwise,” she said, calling Marfa’ Projects a “second home.”

In Marfa, and during an already tumultuous year across the globe, Johnston and Bosworth were staring down an obstacle of their own: an unexpected cost of a roof replacement on Bosworth’s workshop, needed before monsoon season. Despite the financial burden ahead, they still hoped to find a way to help Marfa’ Projects. They started looking for ways to get in touch, finding a few art-world connections that led them to Asseily.

This month, Bosworth and Johnston launched a fundraiser, selling an array of hand-carved cloud-shape woodworks that would go toward funding the roof replacement. There would be 400 pieces, produced by Bosworth, and, according to their social media post, 10% of all sales would go to Marfa’ Projects in Beirut.

“All estimates for a new roof have been over $40,000,” the couple wrote in the Instagram post. Without the repairs, “We are looking at structural damage to the building and will damage the power tools Camp needs in his studio. We can’t put this off any longer.”

Wrong Store explained the decision to share their fundraising money with an art space across the globe to supporters, saying, “Marfa’ Projects, like so many in Beirut, suffered unimaginable loss.” Their mission to support local artists struck a chord with the Marfa gallerists, and it was a story Johnston said she connected with.

Last week, after the cloud art by Bosworth sold out, Johnston was able to wire $4,000 to Asseily.

Asseily said, “One thing I am sure of is that money will be used to help artists, whether it is to help rebuild their studios as some of them were located in Beirut and were damaged, or help them in another way. That sum came from a fundraising for Camp whose studio is being fixed up due to monsoons,” Asseily said. “I want our grant to be used in as close a manner as that of its parent, so to speak.”

It was “extremely meaningful and touching” to receive support from across the world, Asseily said, and “from Marfa, Texas to Marfa Beirut it gave everyone around us a badly needed boost to get through this 2020 that hasn’t even ended yet.”

The Beirut gallerist said, “It gives you this beautiful sense and comfort that we are not alone, especially in these challenging times that we are all facing.”

Johnston said the sharing of fundraising money was a gesture, “From Marfa to Marfa with Love.”