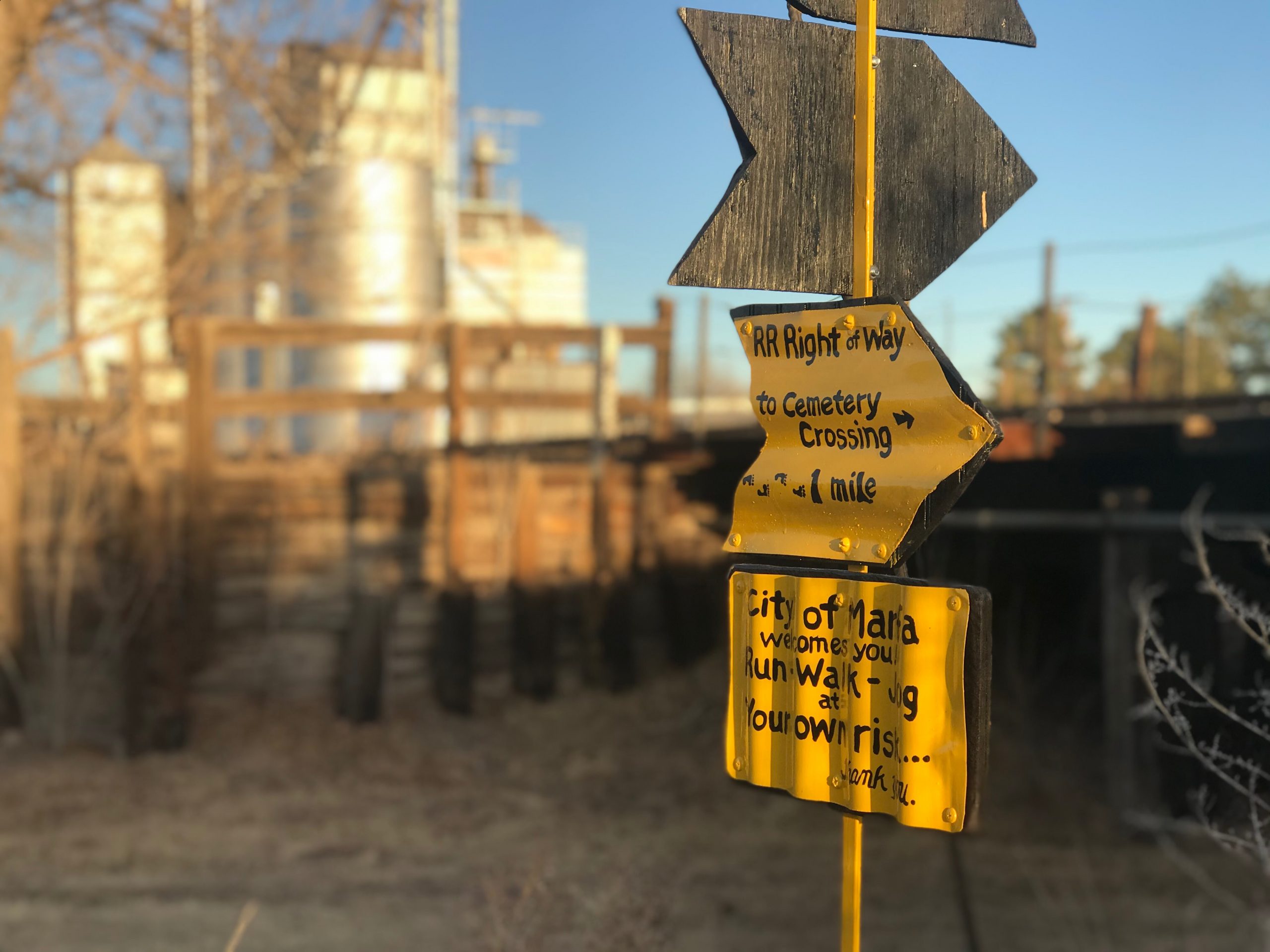 New signage appeared at the railroad bridge northeast of the Godbold building, installed through an initiative led by Marfa resident Jon Johnson and backed by the city’s parks and recreation board. These signs point pedestrians toward a north-south Mimm’s Draw trail or an east-west railroad easement path, hoping to boost foot traffic along both of the existing walkways.
Subscribe

MARFA — One determined Marfa resident has blazed a newly-labeled trail through town. Off the beaten paths of Marfa’s streets, signage has appeared directing pedestrians on foot toward two walking paths that run north-south and east-west.

One path follows the railroad easement across town, intersecting at a railroad bridge near the Godbold building, where people on foot can take the other path south to the fenceline of Chinati Foundation or north to the Mimm’s ranch fence.

Jon Johnson, 77, said he created the project to encourage more people to get out and walk, both for fun and as an underutilized mode of transportation. First, Johnson asked the city council to assist with the project, wanting to improve alleyways as pedestrian paths. They directed him to the city’s parks and recreation board, where he was able to secure some helping hands and a little bit of financial support.

Parks and recreation board member Virginia Platt started walking through Marfa with Johnson, “and what we discovered was that Marfa already has two perfectly good walking areas, without using very much of the alleys,” Johnson recounted.

The pair noticed that the Mimm’s Draw, a dry creek that runs through town, was an unobstructed path. “We went back to the parks and recreation board and told them we found a perfectly good walking trail that could be developed and promoted in Marfa.” Rather than having to forge a trail or fix up an alleyway, Johnson proposed signage that helped locals and tourists find the walking paths already available in town.

Along with the Mimm’s DDraw, Johnson also proposed to the board that they utilize a railroad easement, which is unobstructed by car traffic except for the couple streets that have railroad crossings.

The parks and recreation board voted to grant Johnson $500 to put up signs and print out flyers to get the word out and the city agreed to carry out some mowing on parts of the path that needed maintenance.

“Recreational opportunities are one of our main missions so we were happy to support it,” said board president Trey Gerfers.“It broke down to a really clear mission, a very straightforward project and his willingness to really do all of it.”

This month, a crew of volunteers gathered on the trail to place the signs. Among them were County Judge Cinderela Guevara, Pamela Franzheim, Dan Platt and Parks Board President Gerfers.

“We laughed, we had such a great time. People coming together working on a common cause, a common goal, it really raises your spirits,” Gerfers said. “It gives you something to look forward to, it gives you hope, it gives you pride. It’s something we need right now. This is how we’re going to revitalize our country, our democracy, our community, doing things like this and seeing the beauty we live in.”

The newly-installed signs direct people toward the path from Highland Avenue, keep them headed in the right direction as the Mimm’s Draw crosses under the railroad track, and reminds path users that “the City of Marfa welcomes you to walk, run or jog on this trail at your own risk.”

Path users are invited to walk, jog and run, though Johnson said he’s also seen people horseback ride and use it to walk leashed dogs.

“You will not encounter cars or mean dogs, and you can look out at the mountains and the hills,” Gerfers said, touting the benefits of the paths. Gerfers also hopes students can use it to walk to school safely.

Johnson also had ideas for students. Since the Mimm’s Draw trail runs alongside the high school athletic field, he asked the school’s athletic director, Linda Ojeda, to open a gate in the fence “to allow at least the cross country team to access the draw more easily.”

The next step is to install benches along the trail to allow people to sit and rest, Johnson said, “and we might need to put trash cans, depending upon what we find.” He is currently putting together a volunteer trash pickup event along Mimm’s Draw Trail “to try and get people to come out and walk the trail with us,” he said.

Johnson was excited to see his project finally come to fruition. The way he sees it, the path expands residents’ access to the city. “It’s an expansion of the commons. A little part of the city for people to walk on.”