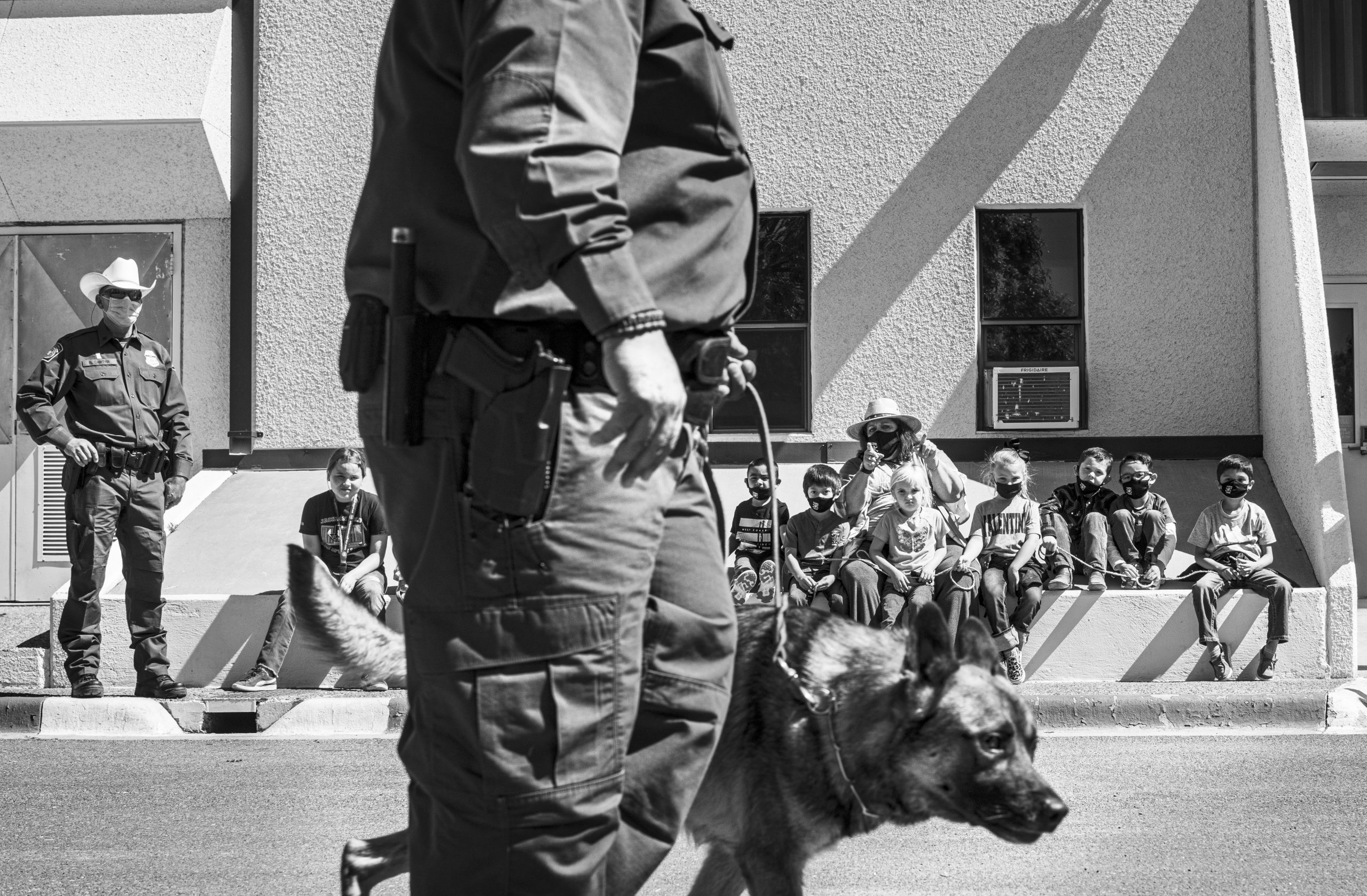 Photo by Maisie Crow / Valentine ISD pre-kindergarten and kindergarten students in Mrs. Kerley’s class watch as a Border Patrol canine and his handler prepare to search for hidden individuals in a vehicle. The Border Patrol Big Bend sector hosted its annual open house this week and invited schools from around the region to attend.
Subscribe

MARFA – Border Patrol invited students from the tri-county region to its Big Bend Sector headquarters on Wednesday to show off some of the equipment and technology agents use during their day-to-day operations, which range from monitoring goods entering ports of entry to preventing undocumented immigrants from illegally crossing into the United States. Students from Valentine ISD, Alpine Christian School and Van Horn ISD were in attendance.

A number of agents also brought their families to the open house. Greg Davis, a spokesman for CBP, said it’s one of the few times agents who are parents are able to show their children what they do for a job.

Border Patrol agents had set up a number of booths throughout the station’s headquarters to demonstrate how they use their gadgets, equipment and vehicles. On display were ATVs, hidden surveillance cameras, a helicopter, night-vision goggles, guns and even the agency’s horses.

At one of the booths, pre-K and kindergarten students for Valentine ISD took turns operating a 15-foot surveillance camera mounted on the back of an F-150. The students would get in the driver’s seat of the truck and direct the camera with an Xbox 360 controller that was plugged into the camera’s computer system. Known as a mobile surveillance system, the camera has a 10- to 15-mile range and is typically used to patrol the remote sectors of the border.

Their teacher, Susan Kerley, allowed each student 25 seconds to direct the camera. Kerley said that the field trip is a lot of fun for her students, but that the excursion is not just about getting the kids out of the classroom. “It’s good to introduce them at a very young age to what’s available to them careerwise,” she said.

Another booth at the open house was dedicated to recruiting students and young adults to the agency. The agent there was handing out Border Patrol themed lanyards, water bottles and carabiners. Those who passed by could also pick up a pamphlet that outlined the perks of the job and included links on how to join.

Bobby Duncan, the executive director of Alpine Christian School, said he’s been bringing his students to the open house for a number of years now. “It’s educational,” Duncan said. “It gives kids an idea of what Border Patrol does.” There were around 20 students from Duncan’s school walking from booth to booth.

At the K-9 exhibit, Kerley’s class got to see how dogs are used on the border. There, Benny – a four-year-old German shepherd – circled a Black SUV sniffing for something inside. When Benny found a human hiding inside the car, his handler gave him his chew toy as a reward.

“To Benny, this is a game,” said Kerley to her class. “You all like playing games, don’t you?”

Border Patrol Agent Scott Wilkes showed students a variety of game cameras the agency has placed throughout the Big Bend Sector, which covers over 500 miles of the border. When the students approached the booth, they triggered the cameras which snapped photos of them and displayed them on nearby computer monitors.

“I want to reinforce that [Border Patrol agents] are here to help you,” Kerley said. She explained that many of her students see these agents around town or in their local grocery store and that it’s important for them to feel comfortable around them.

The agency has been hosting this open house for the past 10 years, according to spokesman Greg Davis. “We want to get young folks out here to understand our mission,” Davis said. This year there was a sizable turnout despite the event being canceled last year due to the coronavirus pandemic, Davis said. Both Marfa ISD and Presidio ISD did not come this year.