The current pastor, Josh Stueve, has been assigned to the Methodist Church in Dalhart in the Northwest Texas Conference. 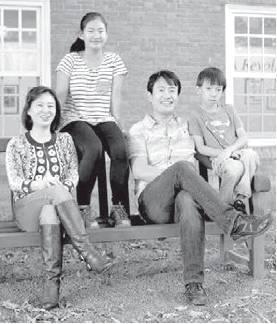 The Methodist Churches in Alpine and Marfa will welcome a new pastor and his family in late June. From left, Ahn, Sophia, Young, and Eugene Kang.
Subscribe

MARFA, ALPINE – The First United Methodist Churches in Alpine and Marfa, in the New Mexico Conference, have been appointed a new pastor, Young Hoon Kang (44), who on May 20, graduated from Yale Divinity School with a master’s of divinity degree.

The current pastor, Josh Stueve, has been assigned to the Methodist Church in Dalhart in the Northwest Texas Conference. The congregations in Alpine and Marfa regret the loss of the Stueves but look forward to welcoming Young and his wife Ahn, 42, and children Sophia, 14, and Eugene, 12.

Originally from South Korea, the Kangs moved to El Paso in 2010. After moving, Young and Ahn served the Korean United Methodist Church as a worship leader and a pianist. They also worked with the El Paso Education Center.

The couple studied part time at New Mexico State University in Las Cruces where Young earned another B.A. in philosophy and Ahn earned her second master’s degree in agricultural extension education. Her first was in forest resources at Seoul National University in Korea.

Besides his pastoral role, Young loves playing video games, watching movies, and sports games as well as running, hiking and swimming. Ahn, a caring wife and mom, is a talented educator, musician, and nature lover. Sophia is very outgoing, energetic and athletic. She has maintained her high honor status in school while mountain biking and trek running for her school. Eugene enjoys watching Netflix and playing Minecraft on PC with his online friends as well as making YouTube movies, drawing pictures, and writing creative stories.

The Kangs will be moving into the Methodist parsonage in Alpine the week of June 23.