Sul Ross rodeo team gets back in the saddle

ALPINE – Sul Ross rodeo alumni and current rodeo team members banded together last weekend in a volunteer effort to rebuild the school’s stock pens. The revamp is an effort to expand the practice facilities for Sul Ross’ rapidly growing rodeo team and prepare for the upcoming Big Bend Ranch Rodeo. Together, volunteers welded more than 2,000 feet of pipe and fencing between Thursday and Sunday. 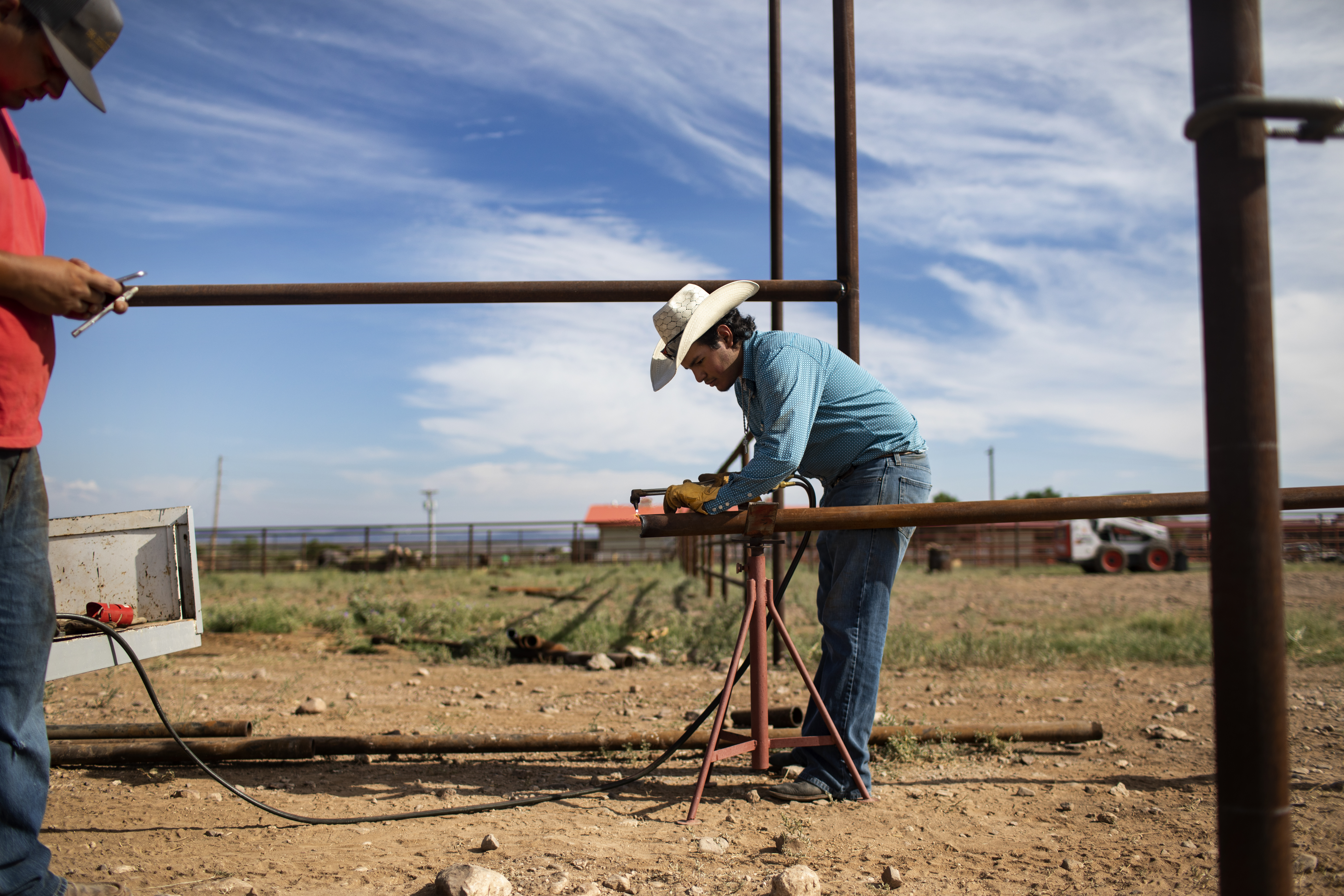 CJ Aragon is only one year into coaching rodeo at Sul Ross State University, but he’s already bringing in star recruits to a team that has struggled for decades to live up to its former glory. Sul Ross lays claim to the birthplace of college rodeo, where the National Intercollegiate Rodeo Association was founded in 1948. Aragon is thrilled about the team’s prospects, saying, “This might be the most talented team I’ve ever had, and I’ve had four or five teams finish in the top ten in the nation.”

The rodeo team is tripling in size from eleven participants last year to more than 30 this coming school year, and Aragon’s biggest struggle right now is the need to improve infrastructure to make the team more competitive. “That’s kind of what this whole weekend is about–building all the fencing, building new pens so we can have more practice stock, getting the new arena and building new stalls. We’re probably going to have the largest team they’ve had here in decades.”

Aragon competed professionally in rodeo for 25 years and was on the United States National team before transitioning into coaching, where he gathered accolades like Men’s Rodeo Coach of the Year and helped usher Odessa College to national rankings.

Aragon made the move to Alpine last year. He wanted to coach at a four year college where he could retain talent longer. Speaking about his team, Aragon said, “We signed the number one high school recruit in the nation, Jesse Keysaer. He’s the reigning high school national champion steer wrestler.”

Additionally, the coach recruited eight junior college students who competed at the College National Finals Rodeo last year, some young competitors out of high school and a promising recruit from Australia. Aragon also touted current team members like Brandon Lansford, who was out in the field, welding pens when Aragon mentioned him. Lansford won the Junior World Title in Saddle Bronc riding and placed just outside of the finals last year.

“I’m really looking forward to this year. I have a feeling the whole atmosphere is going to change as far as the competitive mindset. Successful change is coming for sure,” Lansford said, taking a break from the welding gun. If that’s his impression, then Aragon’s done a good job conveying his goals for the team. When the coach arrived at SRSU last year, he said, “My first priority is to change the culture of the team.”

Aside from excited team members, Aragon has stoked the long dormant excitement within rodeo alumni. “The rodeo coach cares about Sul Ross and now a lot of exes that have not kicked in support are coming back to support and give some input into the programs,” said Truman “Doc” Spoon, a 1960s Sul Ross alumnus who lives in Fort Davis and runs a sports medicine rodeo program.

Don Lambert is the President of the Sul Ross State University Agriculture and Natural Resource Sciences (ANRS) Alumni Association, which is gathering in Alpine this weekend to reunite and fundraise scholarships for ANRSstudents and rodeo athletes. Since the establishment of the ANRS exes more than 40 years ago, the association has given a quarter million dollars to the rodeo program.

Lambert feels that the prior administration did not prioritize the rodeo team and the ANRS program. He said that the program had “one foot in the grave, and one foot on a banana peel.” The rodeo team had become lean, the horseshoeing program disappeared and rodeo scholarships from the school fell by the wayside.

Now, Lambert is hopeful for the program’s future. Alumni throughout the day praised SRSU President Dr. Bill Kibler and Dr. Bonnie Warnock for their support of the program, and Lambert summarized the addition of Aragon, saying, “His recruiting is incredible, we just need to provide him with more money so he can get them here.”

This weekend’s reunion and fundraiser is open to the public, and will include a clay shoot, horseless goat roping, barrel racing, roping, a poker tournament, a dance and a golf tournament. Interested attendees can visit https://www.sulrossexes.com/for the weekend schedule.

The college rodeo season begins in September and optimism for Sul Ross is in the air. “Sul Ross, if you go back and study the history, was put on the map by rodeo and athletics back in the 40s, 50s and 60s,” Spoon said. “Rodeo in Texas is on the up and up; it’ll never die.”