Genevieve Bassham was the first Mexican-American and second female to serve as the City of Marfa Mayor. Her roots are in Chihuahuita, a predominately Mexican-American neighborhood in Fort Davis, that was recently recognized on a roadside marker. (photos by Maisie Crow)
Get the Sentinel

FORT DAVIS – Driving through Fort Davis, travelers often take note of the Fort Davis National Historic Site and Jeff Davis County Courthouse, as well as other markers of important history in the region. One neighborhood with a storied past is sometimes overlooked, given that it’s tucked off the side of State Highway 118, and often out of view from passersby. Chihuahuita is Fort Davis’ almost entirely Hispanic neighborhood, and its history is now memorialized in a roadside plaque.

Notable Marfa resident Genevieve Bassham spoke at a recent ceremony to unveil the historical marker for the Chihuahuita neighborhood. The Jeff Davis County Historical Commission installed a wayside exhibit honoring the neighborhood at the entrance of Pioneer Cemetery on SH 118, southeast of town. A few of the former residents are buried in the cemetery. A photo of Alejandro Olivas’ gravestone is on the marker. Olivas immigrated to Fort Davis in 1892 from Mexico. He owned property in Chihuahuita and eventually had 14 children with his wife Concepción. His great-grandson, Ramon Olivas, a Jeff Davis Historical Commission member, helped lead the effort to establish a roadside marker. 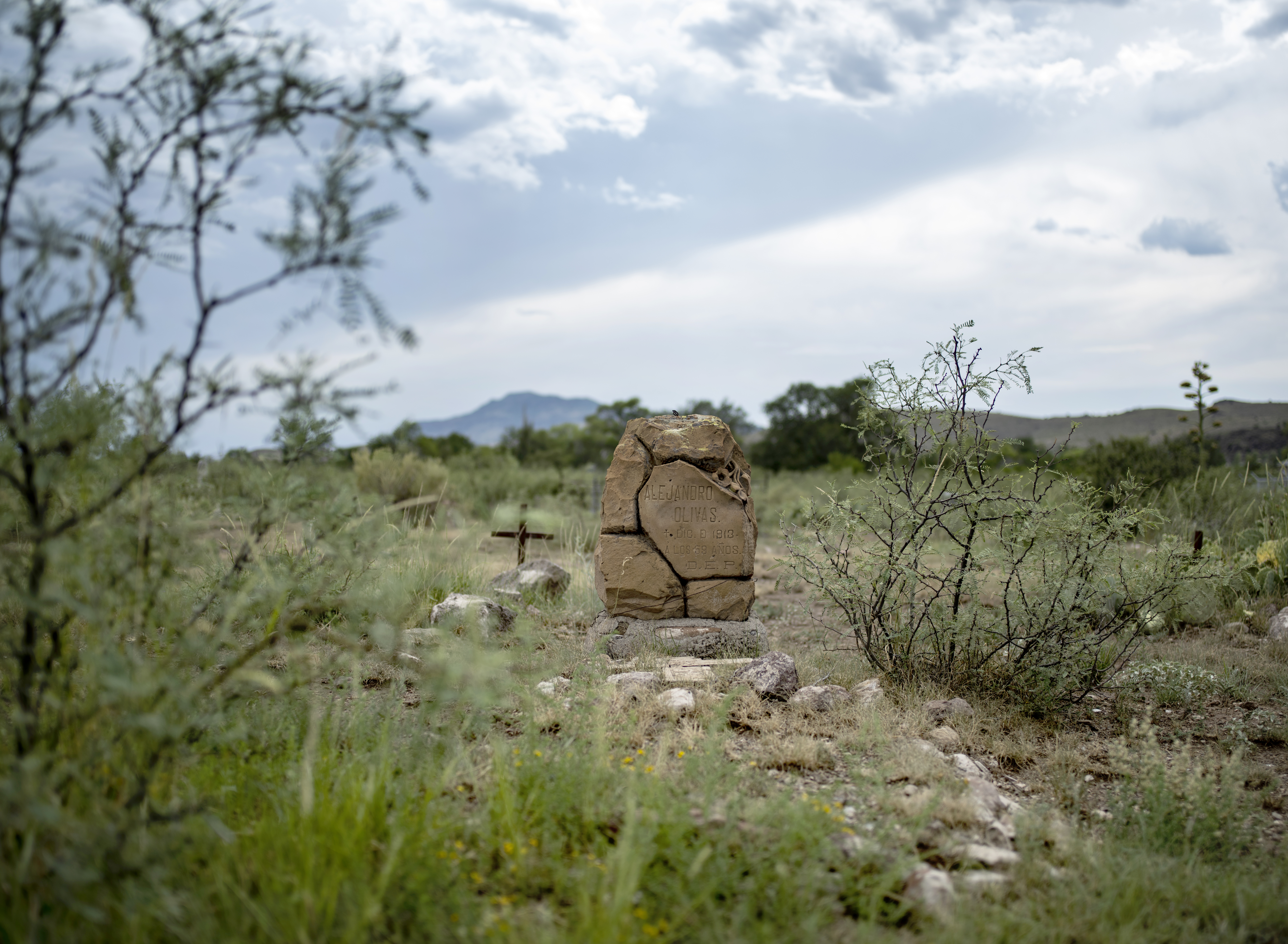 Original residents of Chihuahuita immigrated to the neighborhood in 1890 from the state of Chihuahua, Mexico, hence a name that translates to “Little Chihuahua.” Retired Buffalo Soldier George Bentley and Irish-born shoemaker John B. Shields each received 160 acres of land through a grant from the State of Texas, and sold small lots of their land to Mexican immigrants at low prices. The Chihuahuita population had 395 residents by 1900. There are currently 180 homes in the neighborhood.

Bassham was born and raised in a small adobe house in Chihuahuita with her parents, Jose and Elodia Mendoza, and her two older brothers. It was a humble abode with a kitchen, a bedroom and a living room, until two more bedrooms were added to accommodate her three younger brothers. She still owns the house and occasionally stays overnight for weekends and events.

Fort Davis elementary schools were segregated in 1904, and the Mexican-American students attended a one-room adobe school. The school was later replaced with a two-room building in 1924, where Dirks-Anderson Elementary School currently stands. The schools were still segregated when Bassham was a young girl, but the idea that she was enrolled in that school, or that she primarily grew up with other Mexican-American families because of the color of her skin, never crossed her mind.

“I didn’t notice things like that. Because we didn’t know any better, let’s put it that way,” said Bassham.

She remembers her teachers hitting her with a ruler when she spoke Spanish at school, punished for the language she spoke at home.

Bassham took notice of the racial divide when she entered high school, the same year her school integrated. Bassham said she did not often interact with Anglo-American students outside of sports. She played volleyball, basketball and softball, and the teams would travel to the surrounding towns in West Texas.

Chihuahuita was where Bassham learned how to run a business. Her parents opened the first grocery store in the neighborhood called the Mendoza Store in 1950. Bassham would work in the small building that carried the essentials: bread, canned goods, pressed ham, bologna and drinks.

“The big store was almost downtown, and at that time, not everybody had a car,” said Bassham. “So they had to walk, and they would go to the grocery store one time to buy everything. During the week, they would buy things in the little store.”

The Mendoza Store closed several years later, but the one-room building is still in the neighborhood.

After high school, Bassham attended Tri-State Cosmetology Institute in El Paso to pursue a career as a beautician. It was a career decision she made in the sixth grade.

“I always told them I wanted to be a beautician, because my mother could never comb my hair right,” Bassham said with a laugh. “She couldn’t do anything with my hair.”

Bassham would spend her Saturday mornings at a beauty salon. Her mom would pay a beautician one dollar to prepare Bassham’s curly hair for the week, but Bassham wanted to spend her Saturdays doing something else.

After Bassham received her license in El Paso, she stayed there for two and a half years working as a beautician. She briefly married a hairstylist, Miguel Gonzales II, and gave birth to her son, Miguel “Mickey” Gonzales III. She eventually moved back to Fort Davis with her son, and met and married Manuel Prieto of Marfa. They moved to Marfa in 1967 after Prieto graduated from Sul Ross State University, and were married until Prieto’s death in 1979.

Bassham opened a beauty shop in Marfa that has had various locations, but the current one is on the corner of Austin Street and El Paso Street, across the street from The Crowley Theater. She still practices, but she has another beautician work twice a week.

Bassham was the first Hispanic and second female to serve as City of Marfa Mayor. She didn’t have much experience with politics, so she learned as much as she could to run the city. Although, her friends told her that the only requirement for being the mayor is to attend the meetings.

“You know, they put it real nicely,” Bassham joked. “It’s not like that. You need to be in your office, knowing what’s really going on.”

She was mayor for six years, or three two-year terms, from 1987-1993, but by the end of her third term, she had decided not to run again, and instead enrolled at Sul Ross State University. Her education was paid by her beauty work, allowing one customer to pay for her services at the end of the semester, so she could use it to pay her tuition.

She first pursued an art degree because Sul Ross was offering art classes at Marfa High School, and one of her clients, then-English Professor Evelyn Millard, encouraged Bassham to start her college education there.

“It was hard because I had been out of school for so long,” said Bassham.

She was in her late-20s, and her children were young. She also had her business and a husband. She would wake up at 4 or 5 a.m. to study while making sure her family had everything they needed. She made it work, and eventually earned her bachelor’s degree in art and a master’s degree in education and counseling.

Bassham returned to Marfa City Council by appointment, 20 years after she served as mayor, to fill a vacant seat after the death of Councilmember Corina Brijalba in 2013. Bassham went on to serve for five years on council, and lost in a race against Ann Marie Nafziger for mayor in 2017. After her defeat, she still had one more year to serve on the city council, and decided not to run once that year was complete.

Bassham keeps busy though. She is Chair for the Big Bend Community Action, and co-founded Saluvida, also known as the Marfa Food Pantry, with her husband, Elbert Bassham. She’s a member of St. Mary’s Catholic Daughters of the Americas. All these organizations share a similar mission––helping those in need.

The historical marker is the fourth sign honoring a place in Jeff Davis County by the historical commission, but the first one to memorialize a neighborhood. They’ve previously honored the town of Valentine, and Memorial Square and Front Street in Fort Davis. Williams said Chihuahuita was chosen because it’s one of the earliest established neighborhoods in Fort Davis, but she added that the idea kind of evolved as they were working on the markers for Front Street and Memorial Square.

Also on the marker are images of the aforementioned George Bentley, his wife Concepción, and the large adobe home named Bentley Hall that still stands in Fort Davis. Bentley Hall was surrounded by houses built by the Bentley children and grandchildren, and referred to as Bentleyville. Other notable residents on the neighborhood exhibit include Juan Razo and World War II Technical Sergeant Manual S. Gonzales, who Olivas refers to as the most famous Chihuahuita resident. Gonzales was awarded the Distinguished Service Cross, the Silver Star, the Purple Heart with clusters, and the Combat Infantryman’s Badge. He returned to Fort Davis after the war and lived there until his death in 1957. There’s a street named after him in Chihuahuita, and a monument honoring him stands on the Jeff Davis County Courthouse’s lawn in Fort Davis.

Gonzales didn’t finish high school before he left to serve the country, but Fort Davis ISD awarded him a posthumous high school diploma in 2014. His grand-niece Francisca Grado Escovedo accepted it on his family’s behalf. She keeps her great-uncle’s diploma displayed on a shelf in her home. She even brought it to Austin when she lived there for a year while undergoing chemotherapy for breast cancer.

“It’s gone with me everywhere. I don’t leave it by itself because he’s part of me,” said Escovedo.

Escovedo couldn’t attend the dedication ceremony because of health issues, but she has seen the highway plaque and thinks it’s nice. Escovedo never met Gonzales before his death, but she knew about him. Chihuahuita resident Linda Granado Rubio said that everyone knew each other back in the day because there weren’t too many residents. Rubio’s grandpa, Concepción “Chon” Granado, was one of the neighborhood’s earliest inhabitants, born in 1895. The marker includes a photo of Granado standing with his two mules attached to buckboard wagon.

Granado died in a car accident on October 24, 1997, the day before his 102th birthday. The centenarian was riding his motorized wheelchair when he was accidentally hit by a Ford pickup truck on Highway 17. Rubio stayed with her grandpa at the hospital until he succumbed to his injuries. She said that her family honored Granado with a wagon for his funeral.

“The wagon took him all the way up to the cemetery,” said Rubio. 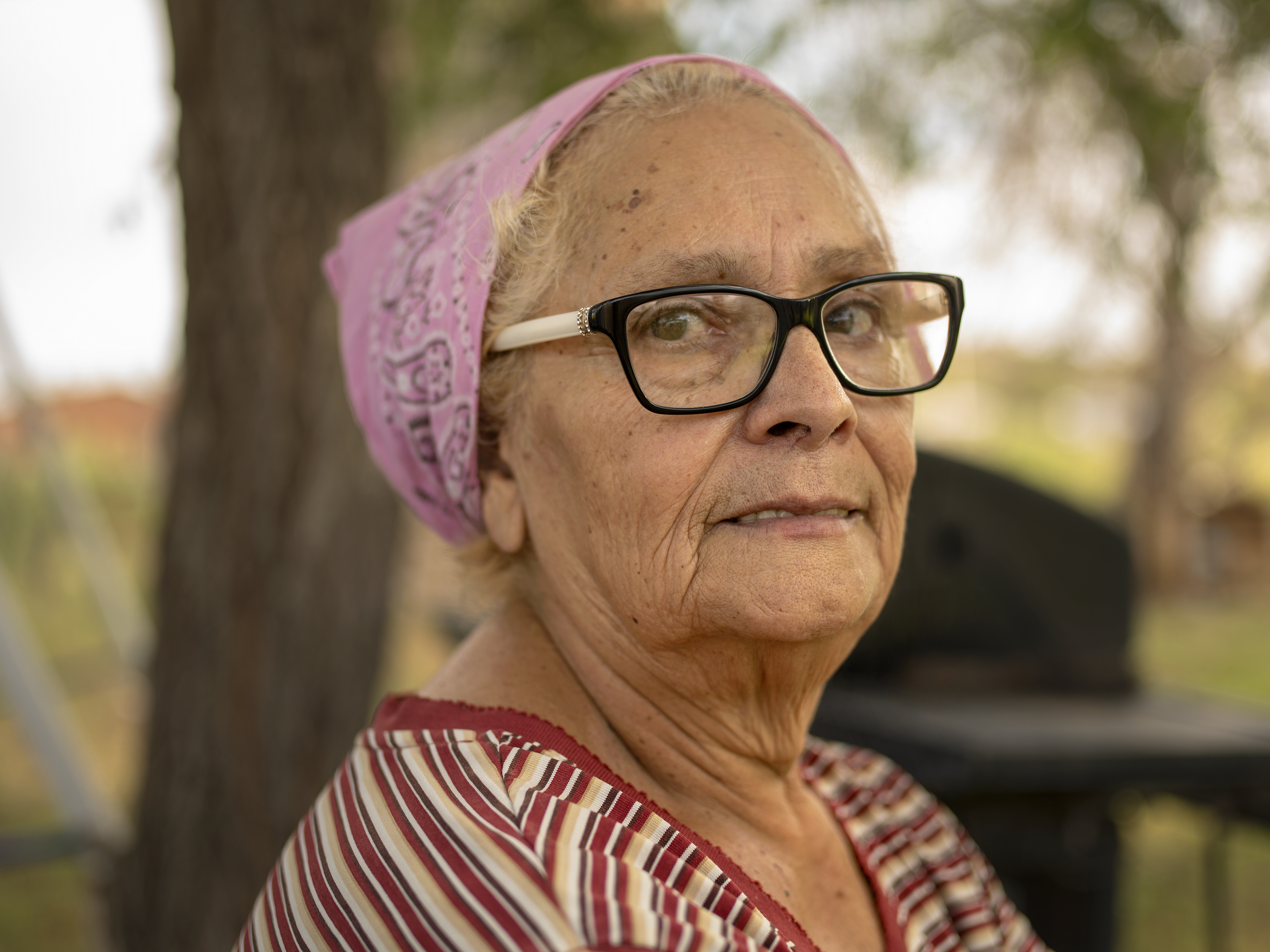 Former U.S. Representative Pete Gallego filed a state resolution three years after Granado’s death to honor him in the state capitol, stating October 25, 1995 was “Chon Granado Day” in Jeff Davis County. The resolution writes that “Concepción Granado was a man of rare wisdom and generosity; although his unique presence is gone from us now, his remarkable spirit lives on in the hearts of the many people whose lives he touched during his time on this earth.”

Rubio shared her memories of growing up with her grandpa. He embraced a DIY first aid aesthetic, using duct tape to dress his injured knees or broken ribs. He would offer a swig of the liquor that he would always carry with him, and say, “Ándale, I got liquor. Ándale.”

When he was about 80 years old, he dressed up as Santa Claus for his family. He started his walk in Santa’s red suit a few blocks from his house, but never made it.

“The bag was too heavy for him,” said Rubio.

The adults eventually sent the kids to look for him, revealing the true story behind Santa Claus. “We had a real lovely life with my grandpa, Chon,” said Rubio.

Ramon Olivas, who grew up in Chihuahuita, helped take the lead with sign preparations as a way to give back to the community that shaped his values. He credits his parents and his upbringing for helping him succeed in his almost 30 years with the National Parks Service. Olivas says it was a team effort by the historical commission to bring this idea to fruition with the late-historian Lonn Taylor and Commission Chairperson Mary Williams. Taylor passed away a week before the official unveiling of the marker, but his contribution was remembered at the ceremony. 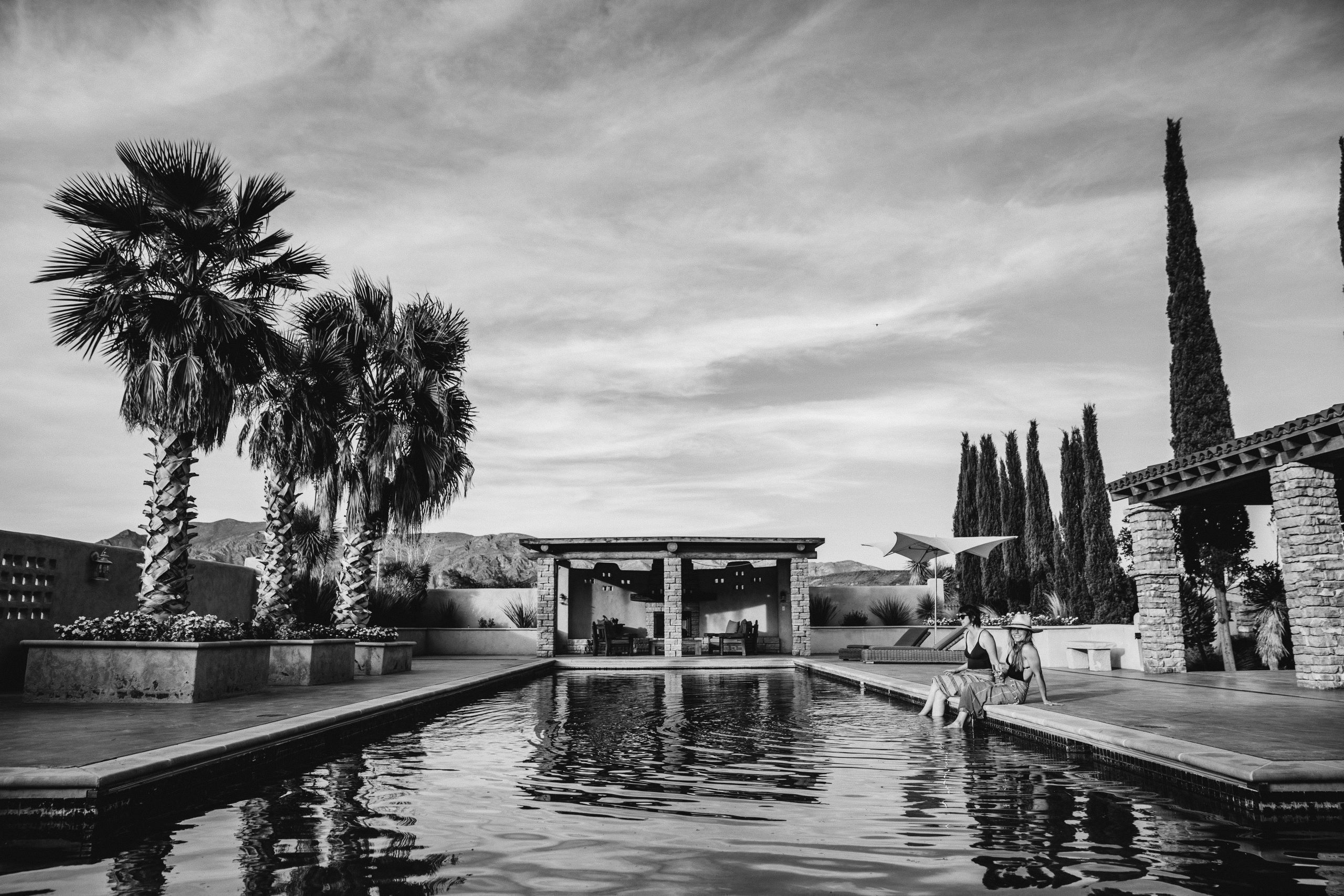