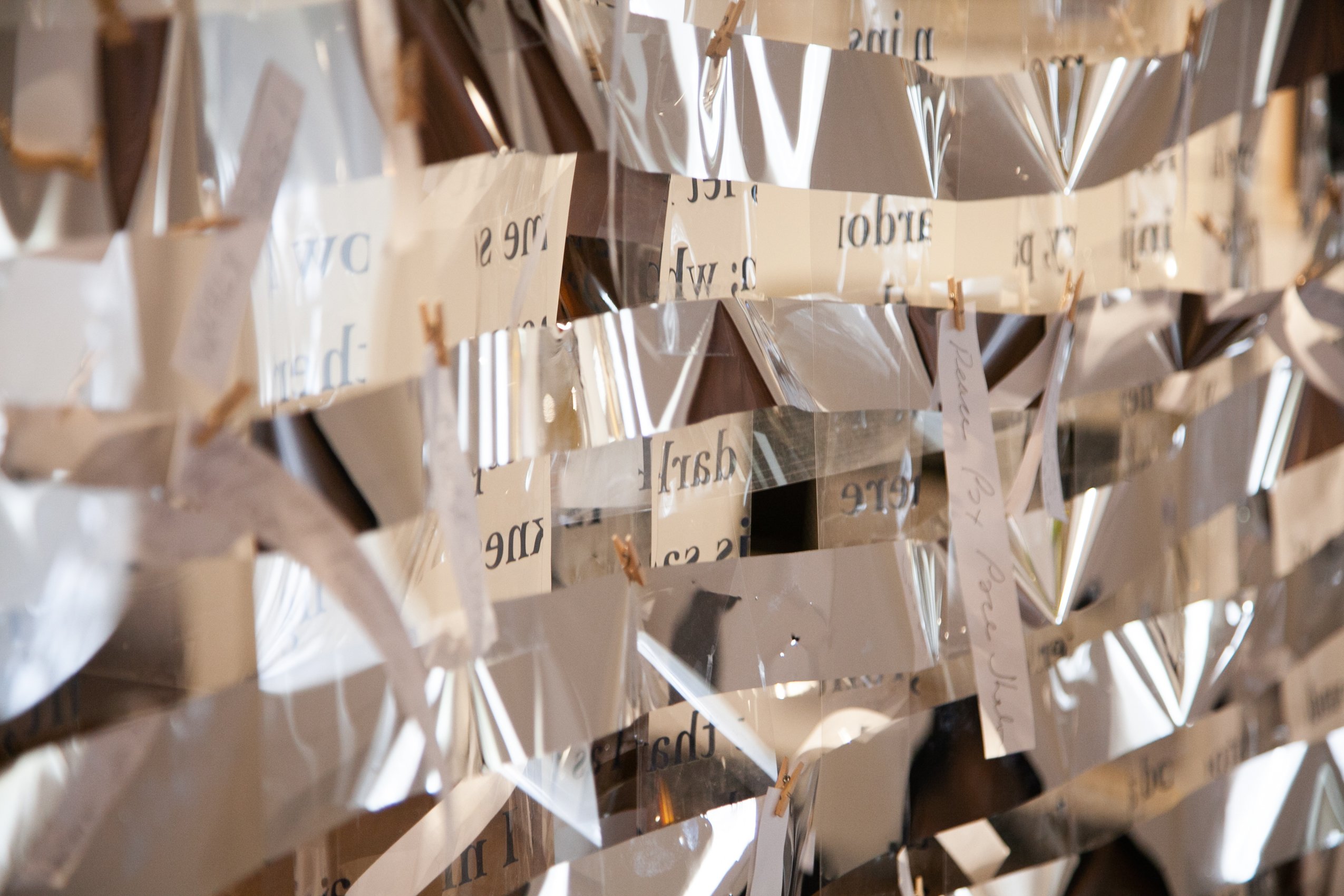 MARFA – It began as an investigation into art theft, but as the Marfa Police Department dug deeper, new truths came to light. Police interviews revealed that two missing works by Francie Wong that were on display at the International Woman’s Foundation at Building 98 had been unceremoniously thrown away.

The official police report has not yet been released, but Police Chief Steve Marquez, who is familiar with the case, stated that a company based in Alpine was hired to clean at the art institution. Officer Frank Hernandez, who is leading the investigation, told Chief Marquez that the orders to clean out the gallery came from the IWF Executive Director, Mona Garcia, so, “That’s what they did, and that’s when the art got thrown away,” Marquez recounted. “They said, ‘We were told throw everything away in that room.’”

Wong’s exhibition at Building 98 last year was a meditation on prayer, and at the end of her show, two pieces were left installed as part of a longer project. One of the two pieces that remained installed was an interactive creation, where viewers were invited to write down their own prayers and add them to the work. Those prayers were then going to be incorporated into a new piece of work that Wong was in the process of making.

In a statement from the executive director of the IWF, Mona Blocker Garcia, the mission of the IWF is “to enhance the intellectual, spiritual and physical lives of mature women and men in the arts,” and its purpose is “to promote arts and healthy aging.”

Garcia said that when she returned from a winter vacation, she noticed the work was gone and assumed Wong’s local family members had picked up the art. She said all that remained were scraps of paper – visitor’s prayers – on the floor of the gallery.

Wong, currently based in Los Angeles, arrived in Marfa in early July to pick up her pieces from Building 98. She had received no indication that her work was not going to be there. “This could’ve been taken care of back when it happened, and instead it wasn’t. It was just shoved to the side, shoved to the side,” Wong lamented. “Instead I went to the measure of coming to pick up the works, and then finding out once I was there that it was gone.”

“To have my work just thrown out feels really horrible. It’s almost like, are you judging the value of the work? Is this a statement on what you think of the work? Or was it an accident?” Wong said this week. Now the work will need a value assigned. Wong is planning to seek compensation from the IWF for the loss of her two artworks.

“My next step is to write a letter to the board of the International Woman’s Foundation, explaining my understanding of what happened and the timeline as I understand it to be, and asking to be compensated for the work.”

In a written statement delivered to the Sentinel last week, Garcia said, “We are conducting an investigation into who possibly had access to Building 98 during our absence. We are working with the artist and others whom we know were present to determine what happened to the art. We have also contacted the Presidio County and Brewster County Sheriffs’ Offices and provided images of the missing art. There will be a reward for information leading to the perpetrators and the return of the stolen items.” Garcia could not be reached for comment in light of revelations from the police report.

Chief Marquez suggested the case has the potential to become a civil suit “for whatever loss was caused by throwing away the victim’s artwork. It looks like a lot of miscommunication, and they’re going to have to basically provide something for the loss.”

“Why didn’t somebody approach me and say, ‘Oh my God, there was a huge mistake, this is awful, we feel horrible and let’s figure out how to resolve this calmly’?” Wong questioned. As the artist seeks compensation for lost work, she is already busy creating something new. “I’m going to be making work specifically in regards to this.”

A Brewster County sheriff deputy was suspended without pay after being arrested for solicitation of prostitution.