Marfa comes together in wake of the El Paso shooting

Marfa residents Travis Walker and Arthur Ruiz light candles for the altar they created for those affected by the El Paso shooting. (Photo by Sarah M. Vasquez)
Subscribe

MARFA – Marfa residents are showing their support through concerts, art sales and prayer circles for those affected by the mass shooting at a Wal-Mart in El Paso. With the border town three hours away from Marfa, the predominantly Hispanic town is where Marfa residents go for a taste of the big city life or to visit loved ones.

“This one hits harder to home because El Paso is just our next town over the hill. We all have friends and family over there. We all grew up out here. If we want to fly anywhere, we all go there. If we want to go out of town and go shopping or go bowling, that’s where we go,” said Travis Walker, a Marfa resident.

El Paso has been named one of the safest large cities in the last three years, but on Saturday morning, 21-year-old Patrick Crusius opened fire with a semi-automatic rifle at the Wal-Mart at Cielo Vista Mall, killing 22 people. Crusius drove 11 hours from Allen, a suburb north of Dallas, to El Paso. Texas Tribune reports an online manifesto that claims the shooting was motivated by a hatred against Hispanics is currently under investigation by the El Paso police and the FBI.

After Walker heard the news about the shooting, he went with fellow Marfa resident Arthur Ruiz for a drive on Pinto Canyon Road to talk about it. They were sad and upset, and they wanted to do something to honor the victims. They set up an altar made of adobe bricks and religious candles underneath the Virgin de Guadalupe mural by FED DE RICO on the west wall of Marfa Studio of Arts. They invited people to contribute to it, and by the next morning, there were more candles and a Mexican flag added to the altar.

Local businesses, organizations and individuals quickly organized various events and fundraisers for El Paso this week. The Sentinel raised close to $250 from the Palomas made with Gem and Bolt mezcal sold on Saturday night to the Paso del Norte Health Foundation. Bar Nadar at the Hotel Saint George matched the proceeds they raised from the $5 frozen drinks on Monday to El Paso Community Foundation’s victim relief fund.

There will be a vigil at 9 a.m. on Saturday, August 10, at the Presidio County Courthouse steps in Marfa. Rev. Michael Wallens from Saint Paul’s Episcopal Church helped organized the event after he heard people’s request to come together and pray.

Cinda and Teryn Muench invite the public to join them at 6:30 p.m. tonight on the Presidio County Courthouse to pray for the victims, families and loved ones who were wounded or killed this weekend in the shootings in El Paso, as well as in the shootings that occurred Sunday morning in Dayton, Ohio and Sunday evening in Chicago, Illinois.

Later tonight, a group of local musicians called The Grand Tourists are performing around 9 p.m. at the Lost Horse. There will be a tip jar to collect donations for the El Paso Community Foundation’s victim fund. The Grand Tourists are a spin-off band of the Marfa Municipal Alliance for Dead Country and Folk Singers that frequently perform shows honoring famous country and folk singers on the anniversary of their death. Each show raises money for a regional charity.

Pat Keesey, guitarist and singer for the band, told the Big Bend Sentinel that there are over 75 members in The Marfa Municipal Alliance, but The Grand Tourists consist of six of those members who perform an expanded playlist of music for weddings and other gigs. During a practice session for an upcoming wedding this weekend, the band decided to perform at the Lost Horse to accept donations for the El Paso Community Foundation.

Keesey has gone through El Paso on his way to Marfa since the ‘90s and thinks the town has a lot of character.

“I love the gentleness of it,” said Keesey. “El Paso always seem so gentle and kind.”

El Paso is also former Big Bend Sentinel reporter JD Garcia’s favorite city. He lived there for six months in 2015 and has friends there.

“Every time I go to El Paso, everyone is lovely and really nice. It has a great feel to it. I never felt unwelcome there,” said Garcia.

He saw one of his friend’s post the news about the shooting on Facebook during his Saturday shift at the Lost Horse and immediately contacted his brother David, who was heading there that day. His brother was okay, but the news was terrible to Garcia.

“It’s so horrifying no matter where it occurs, but when it hits closer to home, it’s magnified,” said Garcia.

Garcia wanted to figure out a way to help in whatever capacity he could and started selling a few photos he took in El Paso to raise for money for the victim relief fund. He has since expanded the idea to start the Instagram account, @mafra4elpaso, that will offer additional photos for sale during the next two months.

Nick Bustillos was one of the first to share the news to Marfa through a Facebook group. He has family in El Paso, and his dad kept him up-to-date on the situation. His uncle was in the mall when the shooting happened, but he wasn’t in harm’s way. The degree of separation between Bustillos and friends who suffered a loss is pretty slim.

“I can’t even think of the words. People would not expect that here,” said Bustillos.

“The thing is everybody says and knows that El Paso is a very safe city,” said Cobos. “I feel jittery about it that someone would have driven [eleven] hours to just come and shoot somebody.”

Cobos travels to El Paso about once or twice a month for medical visits. His two brothers and his sister live there. Cobos was at the mall for an eye exam Saturday morning, and was in the middle of getting his prescription when a clerk ran in and told everyone about the shooting. He waited with a small group near the Macy’s department store exit for about 15 minutes until the police showed up and told them to leave and stay at least 200 yards from the building.

Cobos said that he was told to vacate in case the shooter went into the mall. The police apprehended the shooter at an intersection north of Wal-Mart after the shooting took place. Macy’s is located at the east end of Cielo Vista Mall, the opposite side of the scene of the crime. Cobos kept his composure sharing his story. He said he felt safe from where he took refuge at Macy’s, and that there were several first responders on site.

He learned more of the details of the shooting on the news when he returned to his sister’s house. He shared on Facebook that he was in the mall during the shooting and wanted people to know he was okay –– something many did as the news unfolded. People shared messages of relief and were glad he was safe. Cobos stayed in El Paso until Sunday night and went to dinner Saturday night at Los Compadres Mexican Restaurant, a popular restaurant that is usually busy.

“When we got there, there were maybe five tables and it stayed like that most of the night when we were there,” said Cobos. “It’s a popular place. It’s usually packed. You’re standing in line and it’s one in, one out.”

He also noticed the highways weren’t as busy that night. The situation is kind of scary to him, because he wasn’t expecting anything like that to happen in El Paso.

“Maybe I haven’t really thought about it up to this point,” said Cobos. “It was a tragedy. I feel sad for the people that it happened to.” 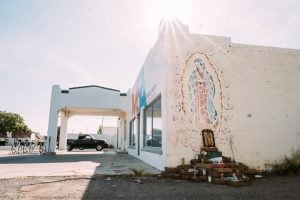