MARFA – “This is harder than it looks,” said Marfa resident Shelley Bernstein. “I thought lap swimming was hard.”

Bernstein usually spends her mornings swimming laps across the pool at the Marfa Activity Center (MAC), but on Monday, she briefly joined one of the last water aerobics classes with instructor Annette Mendoza. Usually, the class will have as many as a dozen in attendance, but things came up this week and only two swimmers were there to work out. Most of the class consists of women who are over 50 years old and refer to themselves as the Marfa Mermaids or Baywatch Babes, Senior Edition.

The women use foam noodles and barbells to stretch their muscles with the water pressure in the pool. Belinda Dominguez, a retired Marfa ISD employee, uses these exercises for her knee.

“Movement really helps me, but I guess I benefit two months out of the year because then they close it, and I’m back to square one,” said Dominguez. “Winters are very hard for me because I don’t really have movement or access to a pool.”

Currently the pool is only open during the summer season. Even though it’s protected from the elements under the roof of the MAC building, the city typically struggles with staffing. The state requires that two lifeguards are on duty while the pool is open, and the City of Marfa usually hires students, so their time is limited.

With budget season around the corner, Mendoza spoke at the August 13 meeting on behalf of the Mermaids to request that the City Council budget for the pool to stay open until Labor Day or later. Former City Manager Terry Brechtel made the recommendation that City Council forego the entrance fee earlier this year, and the pool was free to use all summer. Mendoza told City Council it was fabulous to have the free access this year.

“It was rewarding, fun and necessary,” Mendoza said at the meeting. “As a community, we work on fitness, and that encompasses mental health as well as physical fitness. We would chat, and in doing so, we bonded, which promotes our likelihood of continuing to attend and participate in this group activity.”

Bernstein agreed with that sentiment. She told the Big Bend Sentinel that public pools are vital to connecting the community and can’t be underestimated as a resource. She moved to Marfa this year and already feels connected to other residents.

“At the pool, you’ve got people across all age groups, across all demographics, across all economic strata coming together with no barriers,” said Bernstein. “All you care about is swimming.”

Dominguez said there’s a camaraderie between the regulars at the pool. 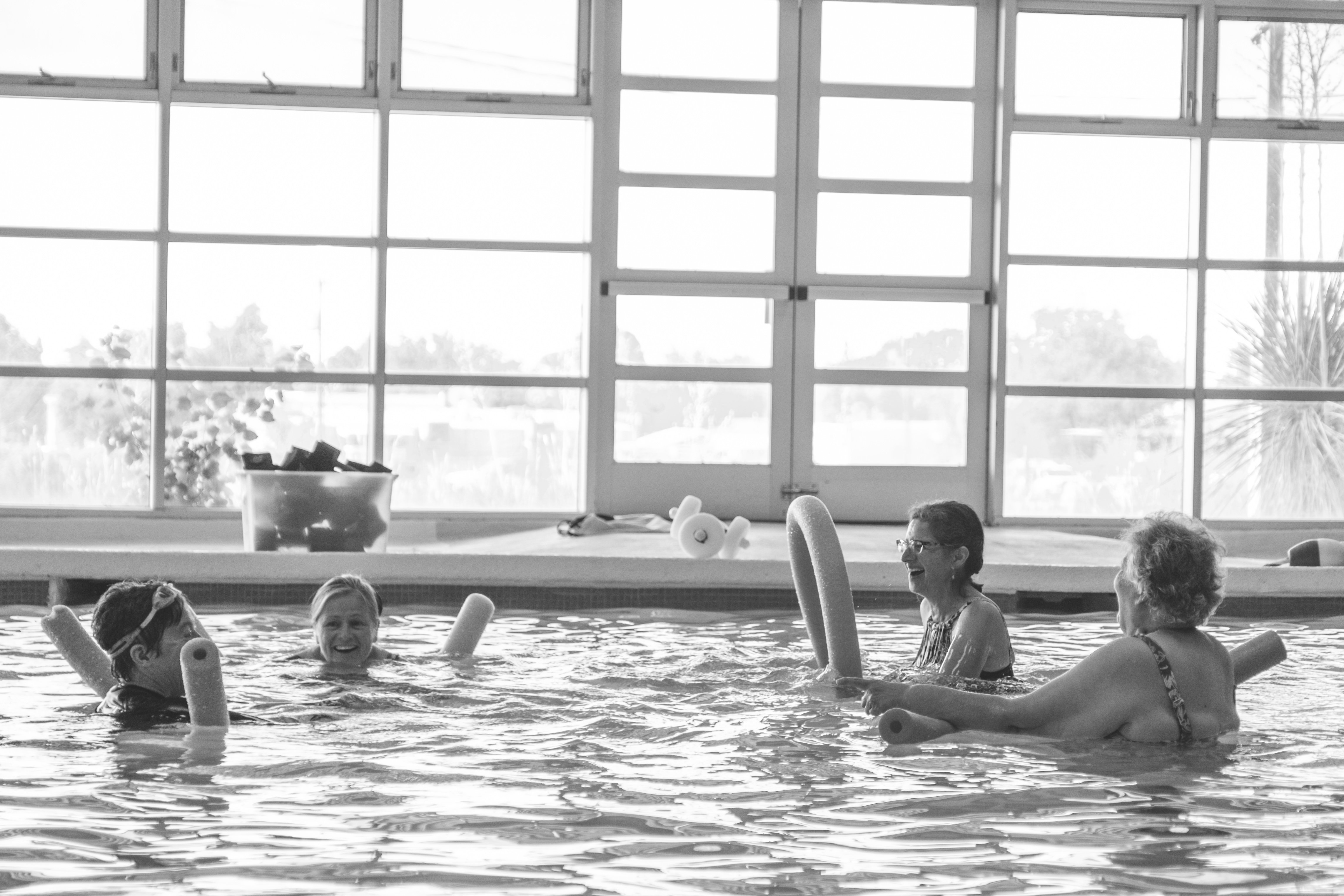 “Some days, our tongues get more exercise than our bodies,” said Dominguez.

Bernstein learned from Dominguez that the pool closes at the end of the summer and started researching how they could extend that timeframe. She discovered that there are different pool classifications regulated by the state, which gave the Mermaids a bit of hope. Marfa is currently a Class B pool, which requires two lifeguards on site any time the pool is open. The pool could be classified as a Class C, a designation intended for hotels, apartments, and multi-family owned pools that doesn’t require lifeguards unless the pool has a diving board or a slide that is not chained or locked to prevent use.

In response to Mendoza at the meeting, Councilmember Buck Johnston said she learned from the Texas Department of State Health Services that there is another city that reclassified their pool and will do more research on this.

“I’m hopeful we can work this out,” said Johnston. “I’m not making any promises. We’re going to have to bring this to the council, but I’m going to work on this to see if we can get this open longer throughout the year, because we have an indoor pool. There is no reason why it shouldn’t be open more months than what it currently is.”

In the meantime, the pool closed on August 21 and will be vacant for the majority of the year. Dominguez hopes something can be done so she and the Marfa Mermaids can continue to use the city facilities for a longer timeframe.

“Not many towns can do what we’re trying to do,” said Dominguez. “Plus, it will keep us older ladies out of trouble.”