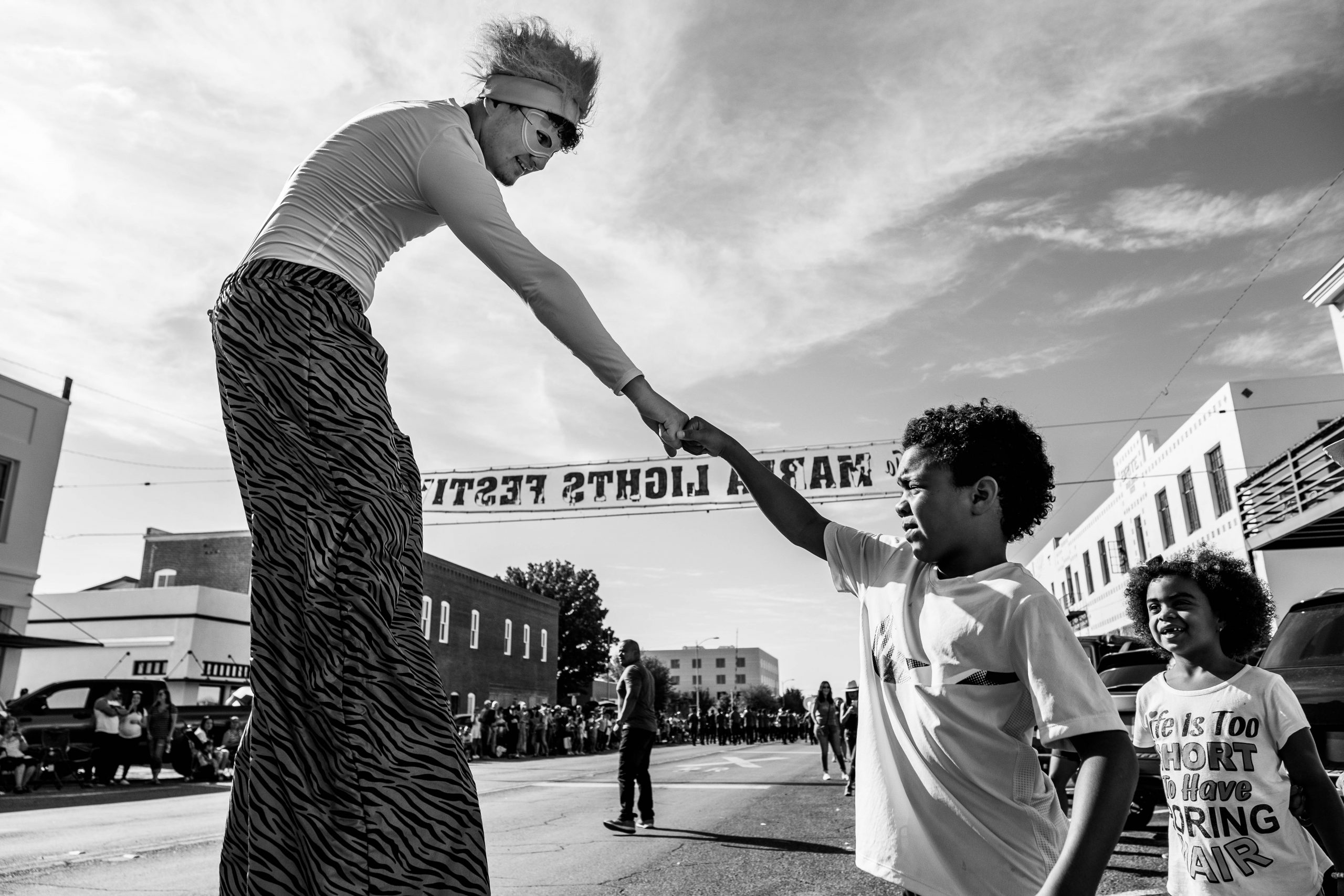 Music, vendors and the annual parade lined up for the Marfa Lights Festival this Labor Day weekend, and crowds from near and far came out to celebrate. New leaders at the helm of the Chamber of Commerce brought fresh ideas to the festival, now in its 33rd year.

This year, Vicky Garlick became president of the chamber, and Virgie Pallarez stepped into the role of vice president. The group brought in more of a country flavor to the music lineup this year, though they hope to cycle between that and Tejano as the years go on. 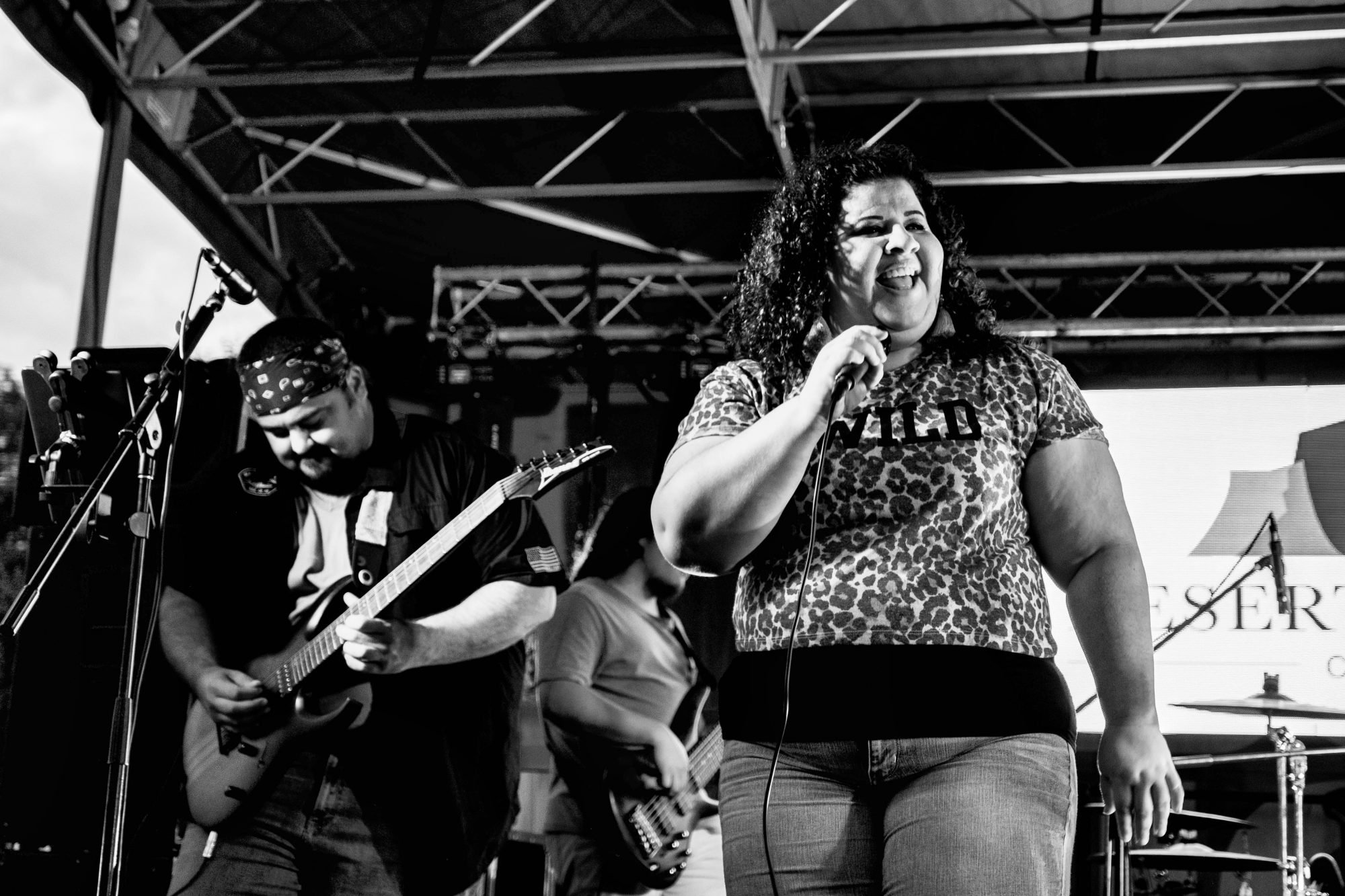 Sauna from Presidio performs during the first night of the Marfa Lights Festival. 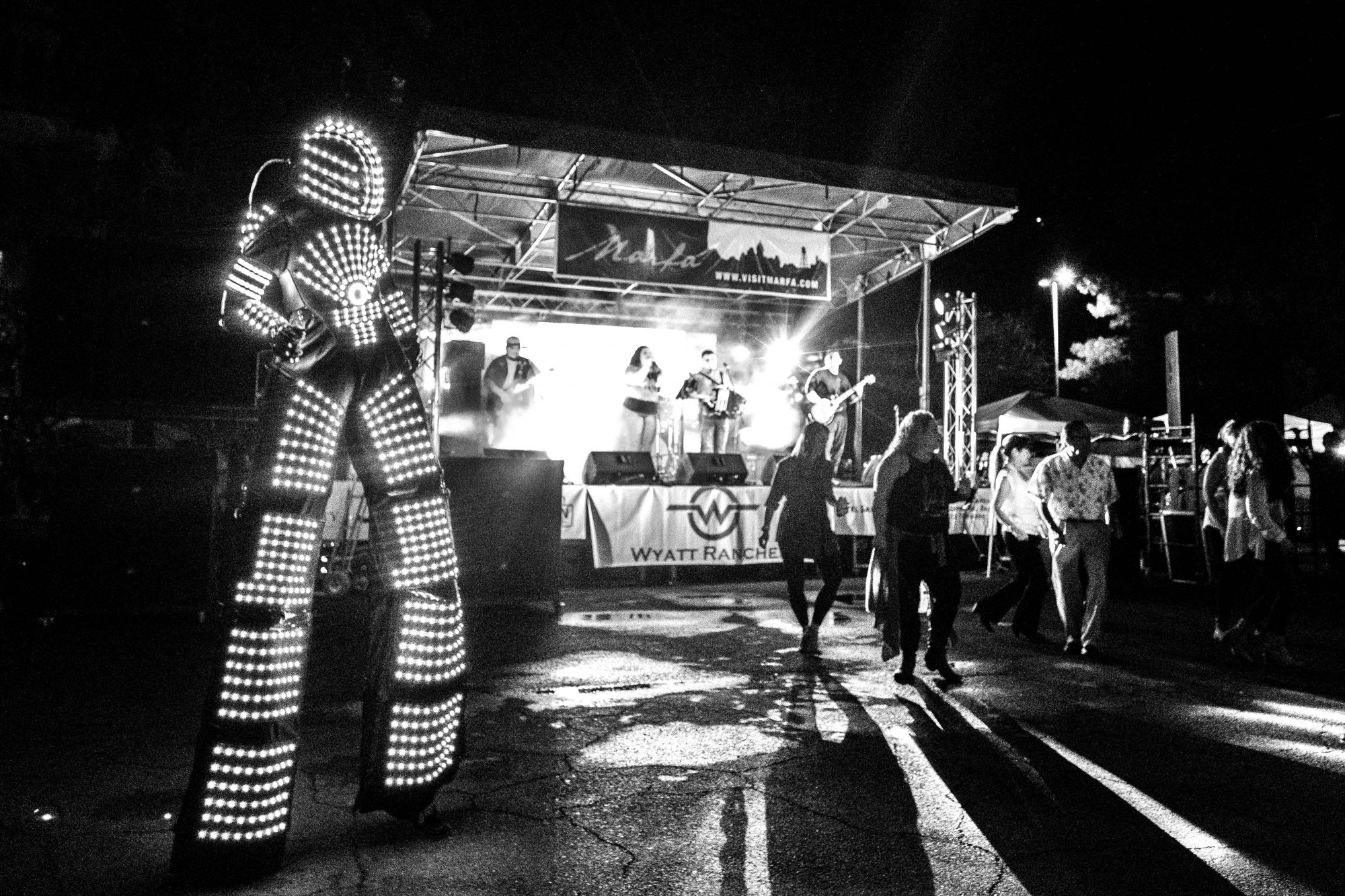 An LED Bot from El Paso dances with the crowd to “Boot Scootin’ Boogie.”

“We want something that the whole community would be interested in – kids, adults teenagers,” Consuelo Chavez, the chamber’s treasurer, said.

“What’s special about the Marfa Lights, why we want to keep it going, is that people get together, come back to Marfa and listen to good music.”

Financial struggles hit the festival earlier this year, but the City of Marfa provided a $15,000 cash infusion from its Hotel Occupancy Tax Historic Preservation funds. Mayor Manuel “Manny” Baeza was happy to support such a time-honored event and lauded this year’s event as great.

“The bands are getting expensive, everything’s getting expensive, but we just are trying to make the most out of it so it won’t die.” Chavez said. The chamber has the distinct responsibility of keeping alive the city’s longest running festival, and they take it seriously.

As the festival has continued, family reunions and class reunions now gather around the event each year. Marfa High School’s class of 1989 and 1999 celebrated their 30 and 20 year reunions, respectively, atop floats in the Saturday morning parade.

Joining the reunion floats were local businesses and organizations. Food Shark threw cash and coins into the crowds and the Los Yonke Gallos baseball team intermittently unloaded from Planet Marfa’s bus to act out a gripping scene of a player caught between third base and home. 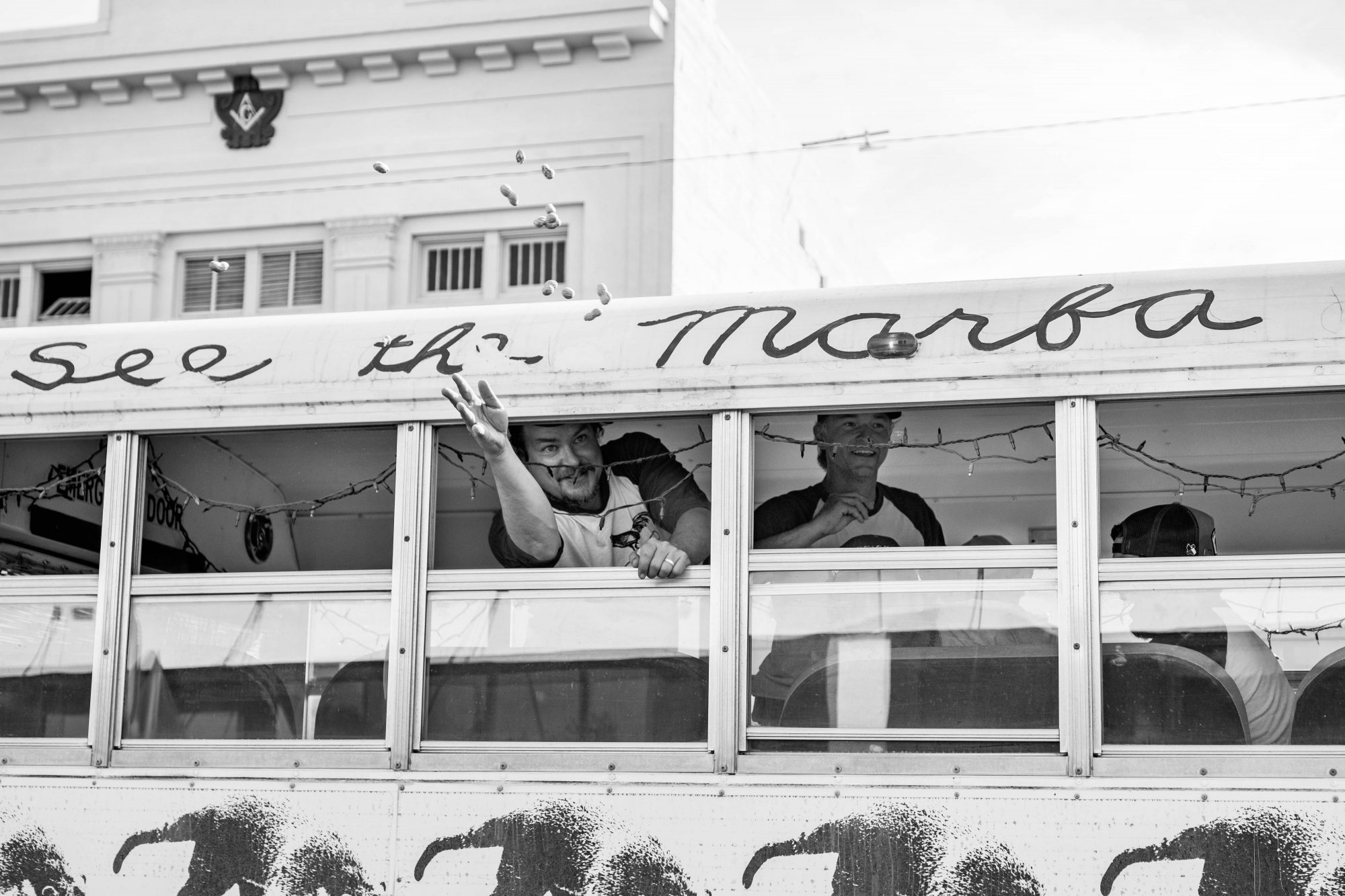 Ross Cashiola and his Los Yonke Gallos teammates throw peanuts during the parade. 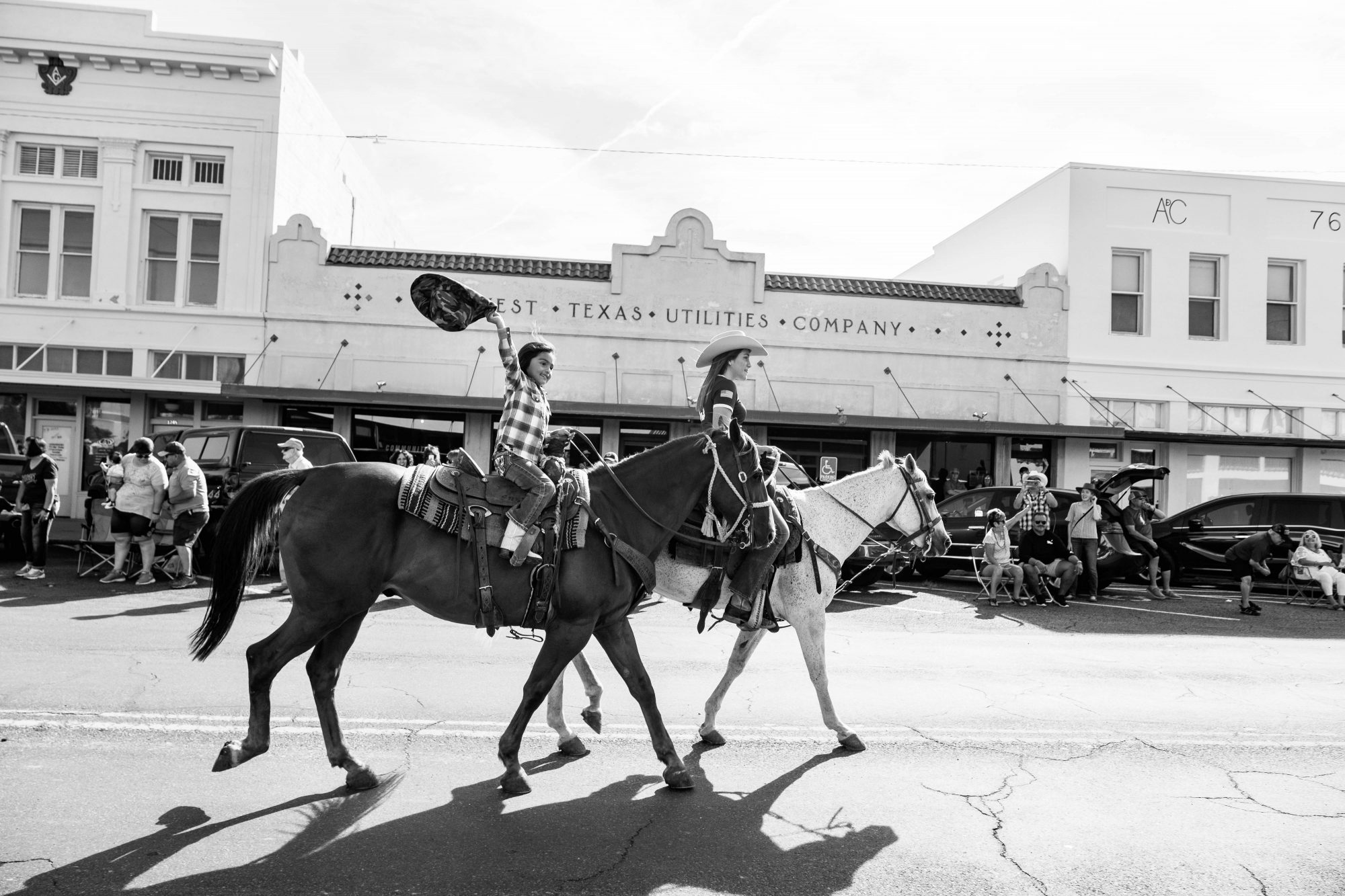 A girl waves her hat to the crowd during the Marfa Lights Festival parade.

The chamber wants to expand the Marfa Lights Festival next year, putting up new signage and growing its fundraising efforts to support the live music program. Chamber members have dropped hints that next year’s musical lineup might lean more toward the festival’s Tejano music roots.

Chavez enjoys each year,“seeing friends, knowing that we’re still alive and having a good time.” The treasurer herself celebrated by dancing the night away with her husband during the Sunday night concert at the Marfa Activity Center. 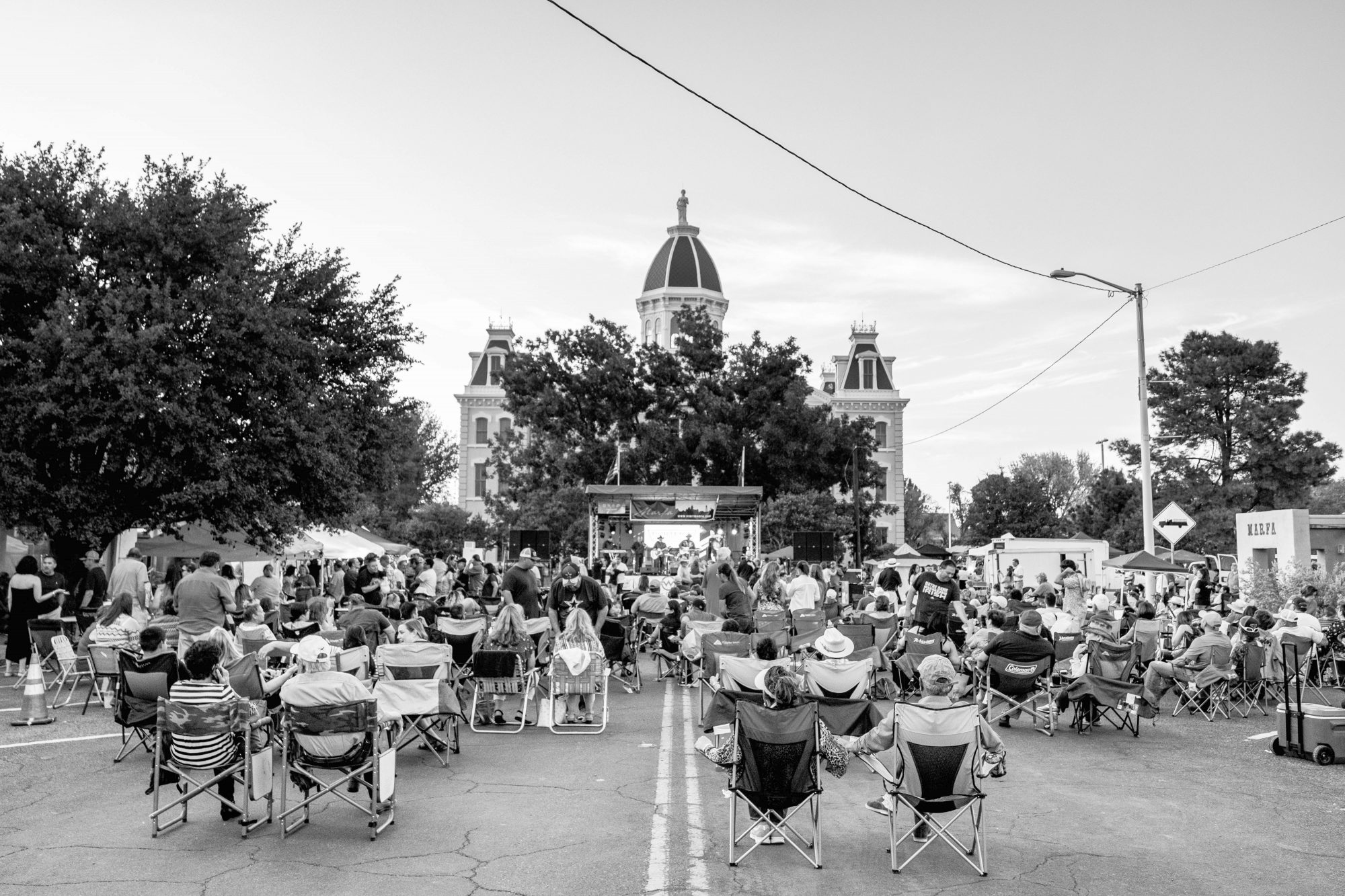 Marfa residents and families reunite in front of the Presidio County Courthouse and watch the Texas musicians that perform during the weekend.