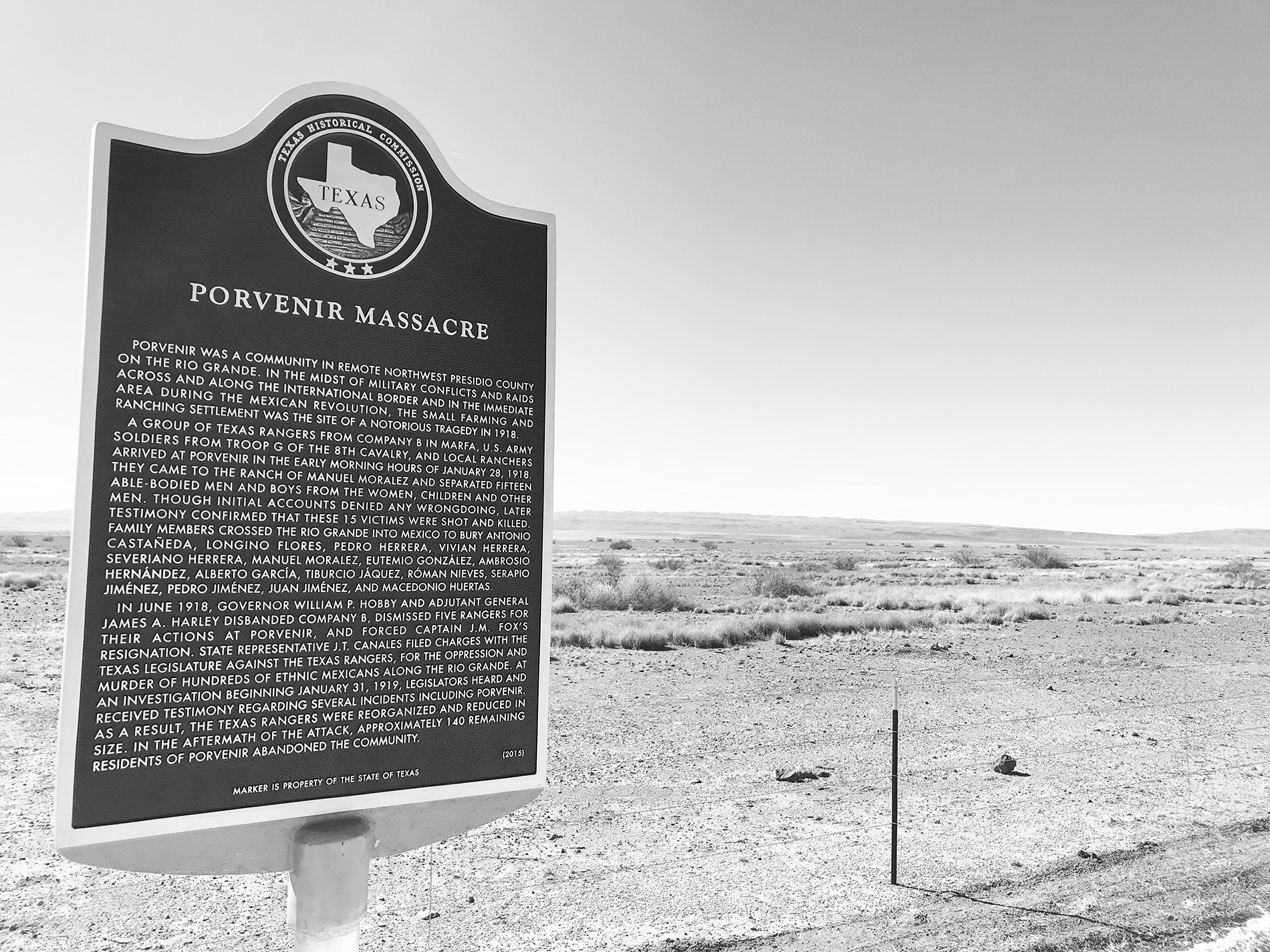 PRESIDIO COUNTY — On January 28, 1918, a group of men rode on horseback into the small farming village of Porvenir, north of Candelaria on the Rio Grande. It was the middle of the night. The men were from the Texas Rangers and the U.S. Cavalry, along with some local ranchers.

They took 15 men and boys from their homes in Porvenir, led them into the brush and shot them. These murders marked the beginning of the end for the mostly Hispanic farming community in Porvenir.

It’s been a little over a hundred years since the Porvenir massacre, which came as tensions boiled along the U.S.-Mexico border as a result of the Mexican Revolution and insurgencies throughout the area. But the effects of the killings are still felt today.

With many of the working men in the town dead and survivors terrified of more violent attacks, the villagers left their homes and spread out across the United States. Only recently have their descendants started to feel a sense of closure and justice.

Authorities in Texas and Washington, D.C. spent decades covering up their crimes in Porvenir. But the full story is now emerging, thanks to the work of archaeologists and historians — as well as the bravery of survivors, who gave testimony and left written accounts.

A new PBS documentary, entitled “Porvenir, Texas,” and directed by the late Andrew Shapter, pays tribute to this ugly chapter of Presidio County history and the people who kept the tragedy from being forgotten.

The Porvenir massacre unfolded as the Mexican Revolution roiled Mexico, leaving a security vacuum along the borderlands.

A mix of insurgents and opportunistic criminals raided Texas border counties, killing locals and robbing homes and stores. The Texas Rangers started recruiting, and their ranks swelled with poorly trained vigilantes, according to the documentary.

About a month before the Porvenir massacre, Mexican raiders attacked the Brite Ranch between Marfa and Porvenir. They robbed the general store and hung postman Mickey Welch from the ceiling.

Rumors began to swirl that Porvenir residents had been spotted wearing shoes from the general store. Lost in the paranoia was the fact that the Brite general store was the only place nearby where anyone could buy shoes, according to the documentary. There’s no evidence that Porvenir locals were involved in the deadly raid.

The coverup of the massacre in Porvenir started almost immediately. James Monroe Fox, captain of Texas Rangers Company B, first claimed that Porvenir villagers had fired at his men before changing his story to match the Brite Ranch rumors.

José Canales, then the only Hispanic representative in the Texas Legislature, opened an investigation and held hearings about the Porvenir massacre. But while his discoveries now serve as important historical documents, Canales faced fierce opposition at the time, later remarking that the inquiry had “nearly cost my life.”

In recent years, Texas has finally begun to grapple with the crimes of its past. In 2018, the Texas Senate issued a proclamation on the massacre, and the Texas Historical Commission approved a memorial.

This year, Presidio County Judge Cinderela Guevara approved a death certificate for one victim, Longino Flores, over 100 years after his death. She has another one pending and is expecting more soon, she said.

“It’s closure for them,” Guevara said of Porvenir death certificates in an interview Tuesday. She invited The Big Bend Sentinel to her judicial chambers to see the pending certificate. It describes the cause of death as “murder” and says the victim was “assassinated/shot and killed.” (Guevara asked us not to identify the victim pending approval of the certificate.) Among the supporting documents are the testimony of a survivor, from 1918, and a Porvenir land deed for the victim, from 1913.

Shapter’s documentary pays tribute to Porvenir locals who spoke out about the killings. First, there was Juan Flores, the only eyewitness to the massacre and the son of one of the victims.

Flores, who was just a child at the time of the massacre, carried his trauma with him for decades before finally sharing his experiences with his family and with historians.

“Had it not been for his help, I don’t think we would know the whole story of the massacre,” Glenn Justice, an author and Texas historian, says in the film.

Then, there was schoolteacher Henry Warren, the only non-Hispanic resident of Porvenir. He visited the site of the massacre and wrote detailed notes on the victims.

Warren faced backlash for his efforts to document and raise awareness of the massacre, losing his job as a school teacher and ending up destitute in Arizona.

For decades after their deaths, authorities tried to forget the massacre and the names of these victims. Shapter’s new documentary is part of a hundred-plus-year campaign to make sure Texans don’t forget about Porvenir, Texas.