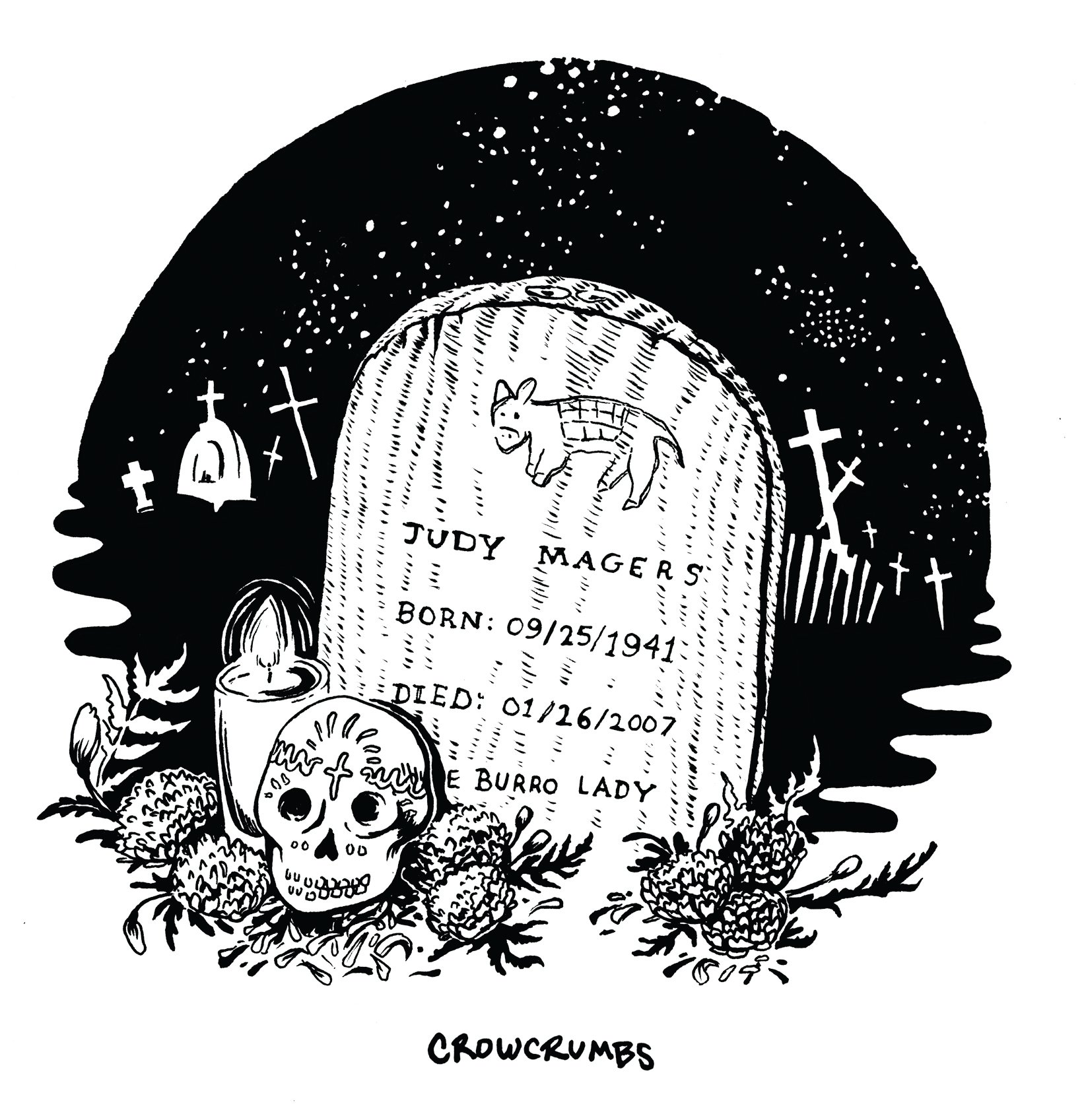 The Big Bend lends itself to myths and legends. The Comanches attacked and wiped out the Apaches. The Bandidos were a constant menace across the Rio Grande. The Comanches attacked the early white and Mexican settlers. The Big Bend was so violent, it was often called by other Texans, “The Bloody Bend.” Small cemeteries are found throughout the region, but one of the most interesting is the Terlingua graveyard, located in our suburb 80 miles south.

When I first moved to the Big Bend in 1997, folks found it strange that although I was “legally blind” and used a white cane to get around, I was constantly taking photographs. “You gotta go to the Terlingua graveyard,” I was told. “It’s the fourth most photographed thing in West Texas.”

I knew that no Texan would admit to having anything second or third best, so the “fourth most” would never be challenged, and I also discovered it was a fascinating place to photograph. I was used to the well-ordered and manicured historic graveyards in the east. The Terlingua graveyard was the most disorganized burial site I had ever seen. Well over 100 years old, it looked as though people were buried where they dropped, and it had become overgrown with desert plants. At that time I did not realize there was an annual clean up event.

Located next to Bill Ivey’s Ghost Town and Terlingua Trading Company, it is part of a community tradition that began more than twenty-five years ago with a spooky story. Bill and Lisa Ivey began a ritual that has developed into a community celebration on Dia de los Muertos (“Day of the Dead”). Several hundred people are expected at this year’s event on November 2. “We decided to take some old discarded jars and remnants of candles to the cemetery and distribute the lit candles among the graves,” Ivey explains. “The day grew dark and cold as a blue northern came through. We were down to only a few matches, so I decided after the last match we would retreat. After putting the last match to the last candle we turned to leave and I bent over to pick something up. Out of one of the supposedly empty jars, a fresh book of matches fell to the ground. On the cover of the match book were the words ‘Your Host Thanks You.’ We took the matches and lit the rest of the candles; we’ve gone back every year since,” Bill says.

“Anyone wishing to take part in the clean-up can bring themselves and their garden tools to the graveyard anytime during the day.” In the late afternoon or early evening, Bill will supply tamales, jars, and candles. Folks can bring the beverages of their choice.

I generally avoid weddings and funerals, but I did attend the funeral of the Burro Lady in the Winter of 2007. It was a beautiful sunny day, and more than 50 people stood around a recently dug grave telling stories of the woman they had known for more than 25 years. The gathering resembled a scene from an old western movie set in the 1880s. Women wore ankle length straight dresses or faded jeans and cowboy boots. Bill Ivey wore an open black vest over a white shirt and black jeans. He could’ve passed for a preacher conducting a funeral. Everyone there had a story to tell about their encounters, and many of them did not even know her as Judy Magers, but only as the Burro Lady.

In 1982, Bill Ivey ran the Lajitas Trading Post. That’s when Judy arrived. She was all alone, and she didn’t speak. “It took her 45 minutes to work up the courage to ask me for the groceries she wanted,” Ivey recalls. “When she first came, she wouldn’t talk to anybody. About 5-foot, 3-inches, Judy was skinny as a fence post, and she nearly always wore big, dark glasses and a hat.” A few years after arriving in Terlingua, she purchased a burro and began roaming the roads and backroads of the Big Bend.

While she occasionally visited with friends about animals or saddles, she rejected most conversation, ignored strangers and questions about who she was or where she came from. She traveled a singular path for reasons known only to her, and what secrets she had remained secret.

Like any myth, questions will always abound. Was she, as rumored, an heiress who had been cheated out of her fortune? Or a rejected lover? Or was there a child involved? No one has the answers, and no one probably ever will.

The Terlingua graveyard has never had a ghost to speak of. My candidate for the position is the Burro Lady, because like the Big Bend, she was an enigma that will never be solved.