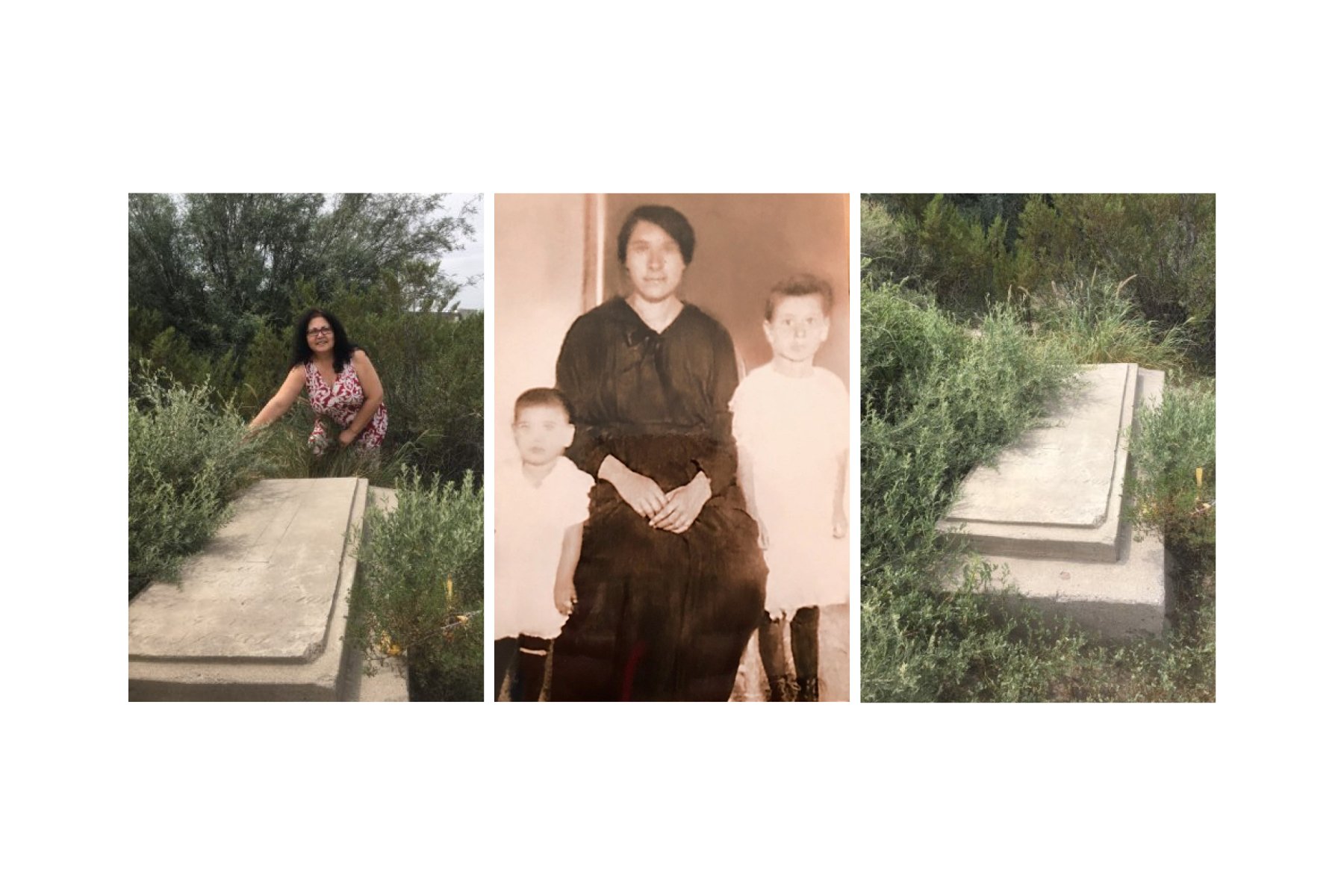 PRESIDIO — When brush was cleared this year to make way for a new Dollar General on East O’Reilly, two marked graves — both around a century old — became visible again.

Now, recent revelations have led local governments and Dollar General contractors to believe the land could contain more graves. Construction on the project has ground to a halt.

Teresa Acosta’s great-grandfather is buried under the only readable marker on the property. Her family is from Presidio, but she moved during her childhood, attending first, fourth and fifth grades in the border city.

As a little girl, Acosta said, her great-grandfather’s grave was just a part of life. She would stop by on her way to school to visit the grave of Manuel Sanchez, whom the family lovingly called Papa Grande.

“We would go there with my grandmother on the Day of the Dead. She would clean around the grave and take flowers and candles,” Acosta said. “I remember there being a little adobe chapel and also many other graves.”

Acosta’s memory of more graves is a problem for those ready to build a store. When an unknown cemetery is discovered, the owners of the land “may not construct improvements on the property in a manner that would disturb the cemetery until the human remains interred in the cemetery are removed,” according to the Texas Health and Safety Code. That could involve court orders or involvement from the descendants of those buried there.

Acosta noticed changes at Papa Grande’s grave on October 5, when she was passing through Presidio with a group of motorcyclists. “It was like divine guidance that we passed by,” she said. “If we hadn’t gone on that trip, they would’ve just built over the cemetery, even if they didn’t touch the two graves.”

She was afraid the burial site would soon be completely erased from Presidio history, so she called her lawyer, and daughter, Michelle Acosta de Moore.

Acosta de Moore soon mailed notices about the cemetery’s existence to the county and to the landowners. She also spoke with the Texas Historical Commission about having the property surveyed – a task that the landowners or family would have to pay for. She also talked to City Administrator Joe Portillo but was disappointed with the response.

“He said that there was really nothing they could do because that construction was going to continue, it wasn’t going to stop,” she said of that conversation. The graves are located on private property, so the city’s involvement mostly revolves around providing the building permit.

Acosta de Moore next spoke with city attorney Rod Ponton, who she felt was reluctant to help. “When I initially called him, he told me that they were not going to stop construction because there might be a cemetery there, based on what someone says,” she said.

In an interview with The Big Bend Sentinel, Ponton said he felt there was a misunderstanding with Acosta de Moore. He wanted more information about the site, and said his goal was to respect the deceased and their families.

Finally, Acosta de Moore spoke with the Overland Group, which develops properties for Dollar General and is overseeing the Presidio site. She was impressed by their willingness to listen, cooperate and believe her mother’s account of a larger gravesite.

In a written statement Wednesday, Crystal Ghassemi, a representative from Dollar General, said the company had voluntarily halted construction on the Presidio store “pending the completion of a ground penetration survey.”

“We expect to have updated plans on the store’s future at the conclusion of that assessment,” the statement added.

Portillo said the city granted the building permit initially because the store’s plans and survey accounted for the two graves and left ample space surrounding them. After receiving notification of potentially more graves, Portillo spoke with County Clerk Virginia Pallarez.

He was unable to find any information about the graveyard. “People had known about the [two graves] for quite some time, but it was never a recognized cemetery in any county or city records that I know of,” he said. “Nothing that we can find.”

However, Acosta and her sister, Maria del Rosario Parsley-Varela, had tried to notify the local governments about the graves in 2012, sending notarized letters to then-Mayor Lorenzo Hernandez at the suggestion of former Special Projects Coordinator Carlos Nieto. The letter was also delivered to Presidio’s former city administrator and city attorney and former County Judge Paul Hunt.

Today, both the county and city say they have no records of the notarized documents.

“Time passed and I would hear nothing,” Acosta said of her first attempt to raise her concerns. “Mayor Hernandez would never return my calls. I would follow up once a month. I’d ask for Mr. Hernandez and they’d say he wasn’t there. Then he was no longer the mayor.”

Later she asked to speak to the current mayor. “They said he had no idea what I was talking about,” she said.

Acosta also said she included a notarized, sworn affidavit by now-deceased Edmundo M. Nieto in her 2012 packet. Nieto was a World War II veteran, founding charter member of Presidio and a lifelong resident.

He was 93 years old when he swore that the tract of land was “the location of a very old grave site,” which he said held “a small adobe chapel surrounded by many gravesites.”

“Over the years this was overlooked and traces of other graves erased,” he wrote. Today, Acosta only has an unsigned and unnotarized version of Nieto’s letter.

Portillo and Acosta both agreed that a dry creek bed that runs along the property could be what swept away the graves over the past century. “A lot of the graves were marked with stones in a pile and wooden crosses,” Acosta said. Multiple floods have apparently shifted the two gravemarkers that still remain, the stones drifting further away from each other.

Now that Acosta de Moore has notified the county, the county clerk must send a copy of the notice to the Texas Historical Commission, according to the Texas Health and Safety Code. The clerk must also file the notice in the deed records of the county, with “an index entry referencing the land on which the cemetery was discovered,” those regulations state.

Overland Group will use ground-penetrating radar to explore the plot and determine whether human remains still lie below the surface. After years of inaction, Acosta is glad the matter is finally being taken seriously.

“I don’t know what’s going to happen with this, but I’m sure it’s going to be a positive outcome,” she said. Reviving the tradition of her grandmother, Acosta and her family have planned a visit to Papa Grande’s grave next month for Day of the Dead.