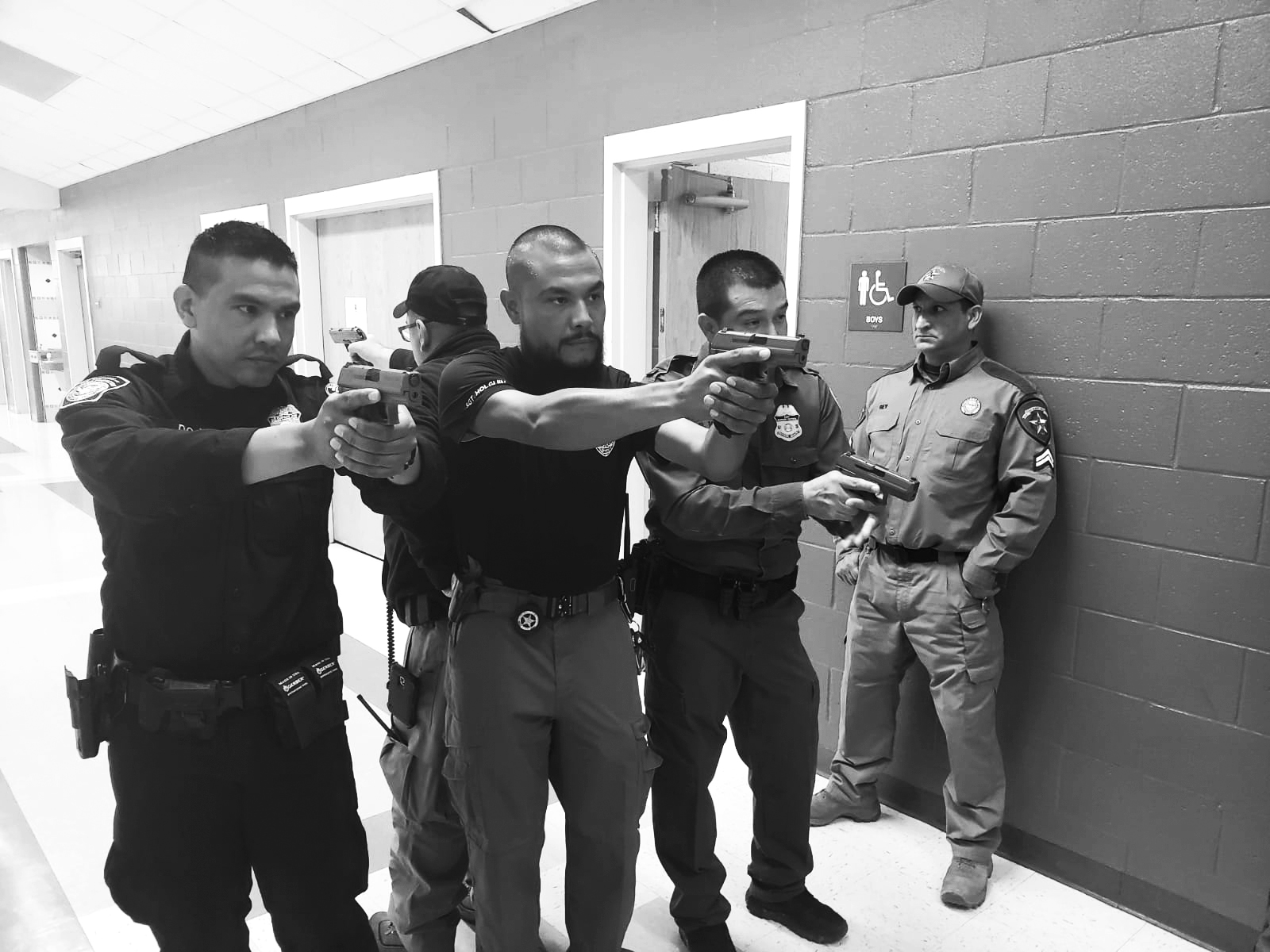 PRESIDIO — In September, the middle and high schools in Presidio City participated in a multi-agency active shooter drill.

The morning drill was meant to be realistic, with authorities firing “simulation rounds,” also known as blanks, said Joel Nuñez, chief of the Presidio Independent School District police. And while local law enforcement were aware of the training, “CBP [Customs and Border Protection] showed up thinking it was a real situation,” he said.

With the nearest hospital over one hour away, Nuñez said it was important to “go beyond the cookie-cutter drill” and train students to think quickly in the event of an emergency.

“We don’t want our students and staff to wait for that [lockdown] alarm to go off. We want them to respond to visuals,” he said. He hoped they would act “if they hear something or see something, without waiting for someone to tell them what to do.”

“We live in a time where we need to be prepared,” he added. “By having these drills, students rise to the occasion.”

These drills are routine, and these particular drills had been planned for months and happen at least once a semester, Nuñez said.

Nonetheless, they came at a time when many Presidio County residents were (and still are) worried about gun violence.

Since August, two nearby population centers — El Paso and Midland/Odessa — have been rocked by mass shootings. For those reasons, among other factors, parents at Marfa Elementary were outraged last month when lockdown and shelter-in-place orders left some students fearing the worst, as The Big Bend Sentinel previously reported.

In Presidio, though, school officials defended the drill as a necessary step to keep students safe. “With the time we live in, with all the recent shootings, we’d rather be safe than sorry,” said Superintendent Ray Vasquez. “We’ve got to be prepared for whatever.”

He acknowledged that “a lot of districts” prefer less realistic active-shooter drills but thought Presidio schools could best “learn from the opportunity and practice.”

John Ferguson, mayor of Presidio and counselor at the high school, said he’d heard that “some people were alarmed by the whole thing.” But he defended the drills as a learning process that “helps us work out the kinks” with emergency preparedness.

“We do have to have these kinds of drills,” he said. “If something were to happen, we need to know how to respond.”

“It breaks my heart that we have to be this way,” he added.

David Beebe, a justice of the peace for Presidio County, was initially outraged when he heard about the drill. “I was just shocked and dismayed and angry, personally,” he said. But after spending much of Monday talking to Presidio officials about the drill, he concluded that “at least a faction” of Presidio was supportive of the drill — even though he still didn’t think “it’s the right way to do things.”

“I can’t endorse what they’re doing by any means,” he said. “But at the same time, the people in Presidio are the ones to decide.”

In particular, he was skeptical about the use of simulation rounds, which he thought could traumatize students.

“It doesn’t matter if it’s not a real gun if it is perceived to be a real gun,” he said. “I promise you, if you walked into a bank with a cap gun, you’d still go to jail. Even if you still had the orange cap on it.”

Nuñez, also the chief deputy for Presidio County Sheriff’s Office, acknowledged the drill had resulted in some “concerned individuals.” But he said the drills were supported by school leadership, including the school board.

Nuñez will hold a bilingual meeting to address possible concerns tonight at 6:30 p.m. at Lucy Rede Franco Middle School. There, with the school PTO, he’ll present a video by the Texas School Safety Center, which shows what a realistic active-shooter drill looks like.

“We do things differently at Presidio ISD,” he said. “We really go above and beyond.”