After their removal from school, one family questions Presidio schools’ residency investigations 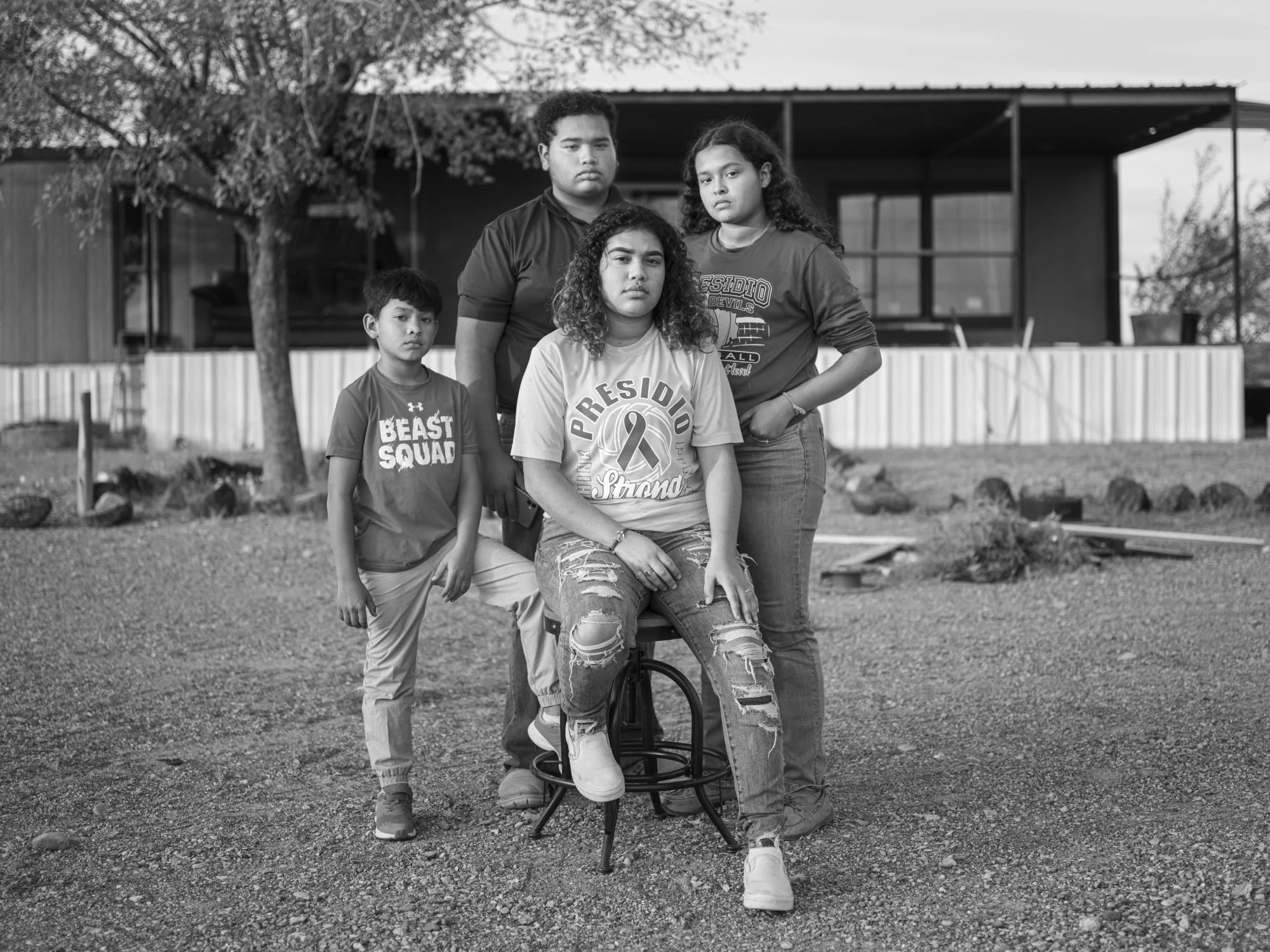 The Ortiz siblings stand in front of their family home in Presidio. The students were removed from Presidio schools by administration after being caught in the school district’s checkpoint and subsequent residential checks. Now the Ortiz’ are questioning long-standing practices at PISD. Front (L-R): Jose Ortiz, Brianna Ortiz, back (L-R): Guadalupe Ortiz, Ximenna Ortiz. (photo by Maisie Crow)
Subscribe

PRESIDIO – Crossing the Presidio-Ojinaga International Bridge from Mexico to the United States is in most ways a typical border commute. On any given day, commuters expect lines of cars, customs agents and entry fees.

But before reaching the palm-tree-lined streets of Presidio, morning travelers from Mexico are occasionally stopped one more time, at an additional checkpoint set up by the Presidio Independent School District (PISD) police department. On those unpredictable mornings when the school district police checkpoint is operating at the “Y” (where the bridge road splits into O’Reilly Street and US 67,) all travelers must yield for questioning.

Officers first ask drivers for their license, insurance and registration. Then, they ask if there are children in the vehicle. Presidio school district students caught in the checkpoint are catalogued: their name, grade and school identification number all written down. The resulting list is later turned over to the district.

On a clear morning in October, PISD’s dedicated police force documented the Ortiz siblings and their mother, Roxanne Vasquez, driving from Mexico to Presidio for the fourth time this school year. That stop led to an officer visiting the Ortiz family’s Presidio home to investigate whether they were living there.

PISD Superintendent Ray Vasquez interprets residency as occupying a home on a daily basis. “They eat, they sleep, they have a room. It has food, utilities, water, things of that sort,” he says. “It has to be a residence.”

The Ortiz family home–a trailer situated high on a rocky hill in east Presidio–didn’t pass the district’s test, and the school decided the students were not spending the majority of their nights sleeping in Presidio. The Ortizes said the officer observed that the fridge didn’t have food but were otherwise unclear what led to the determination that the trailer was not their residence.

Superintendent Vasquez suggested the Ortizes had inaccurately listed their Presidio address on their school enrollment forms. “Any kids removed have falsified their information,” he told The Presidio International. “We want to keep our schools safe, make sure our students do live in the United States and make sure they’re not falsifying anything, which is against the law.”

As a result of the checkpoint and the home investigation by a school police officer, on Tuesday, October 22, PISD executed an “administrative withdrawal,” removing Presidio High School senior Brianna Ortiz and her brother, sophomore Guadalupe Ortiz from school.

Their sister, seventh grader Ximenna Ortiz, was taken out of class Wednesday afternoon. She was in tears as the administrators had her turn over her schoolbooks, locker, volleyball jersey, shorts, knee pads and gym bag.

Fourth grader Jose Ortiz, the youngest sibling, began fearing he would be withdrawn and have nowhere to go while his mom Roxanne was driving his grandmother to El Paso that Wednesday, but administrators didn’t call Roxanne to pick up her youngest child from Presidio Elementary until Thursday. By then, the mother of four had walked into Superintendent Vasquez’ office to protest the withdrawals.

The mother explained that for a while, the family’s air conditioning unit at their Presidio trailer was under repair. Roxanne was also traveling for medical care in Chihuahua City, and said that family in Ojinaga was able to provide childcare while she was away, which led to the children sleeping in Mexico at times.

“[Superintendent Vasquez’] priority was to get my kids back in school,” she said of her meeting with him. To do so would involve another home visit by a PISD officer, where the family would once again try to prove their residency. They complied, making sure the fridge was stocked and the family was at their Presidio home for the check.

“It’s not like they’re kicked out, and we forget about them,” Vasquez said. “We want them back, we want to provide an education. As a school district we’re trying to accomodate all of our Presidio students.”

Texas Education Code contains residency requirements but does not explain how residency is defined. When Roxanne asked Superintendent Vasquez, Presidio High School Principal Hevila Ramos and Presidio High School Assistant Principal Glenn Omar to show her where in the district handbook, state or federal law the family was breaking rules, the officials did not provide that information, instead telling her to look on the district’s website.

Those officials did not point to specific federal or state laws, or provisions in the district handbook that justified their decision to withdraw the students when The Presidio International requested it.

According to Presidio ISD board policy, at the time of initial registration, the parent must present proof of residency as defined by law. The manual reads, “A current utility bill indicating the address and the parent or student name is sufficient to verify residency.”

During initial enrollment, “The Superintendent or designee may visit the residence, upon invitation from the parent, guardian, or other adult with whom the student resides.” After a student’s initial enrollment, the board policy states, “The District shall verify residency through the annual registration forms and may investigate stated residency as necessary.”

Roxanne enrolled her children into PISD at the beginning of the school year, meeting requirements by verifying her family’s residency with one of the various bills under her name at that home address.

The Presidio International verified that the students’ enrollment address at their Presidio home matched bills for property taxes, water and electricity under the names of Roxanne and her mother, the children’s parent and legal guardian, respectively.

Superintendent Vasquez told The Presidio International that the school district’s dedicated police force had investigated residency by conducting random checkpoints at the U.S. side of the international bridge for decades to check for students entering the district. “This is nothing new. They’ve been doing this in Presidio for many years. This is common practice.”

“I’m sure there are folks that are challenging this and are not happy, but it has been a process for 20 to 30 years,” said Vasquez. The Ortizes were not the first students to be withdrawn from Presidio ISD for being found at the checkpoint and failing a home check, but they were the latest.

At the high school, outraged students coordinated across Instagram, Snapchat, WhatsApp and Facebook with posts urging fellow classmates “to protest against students withdrawn from school for crossing the border to get to school.”

Seniors wore white, juniors red, sophomores green and freshmen black, to represent the colors of the Mexican flag, and various posts urged students to not wear their school identification card lanyards. One student shared photos of handmade signs that read “Bring back the Ortiz” and “Ortiz strong.”

Brianna asked classmates not to participate in a planned walk out, because she feared administration would take away their prom or senior week. “What if while protesting for us, they get punished like that?” she asked.

On Monday, October 28, PISD police conducted their second home check with the Ortizes. They passed, and that afternoon, the children were re-enrolled into Presidio schools using the same residence they had previously provided. But Roxanne was not ready to move on.

During the course of the withdrawals, her children had missed classes, major course exams and sports practices. Roxanne rushed to re-enroll Ximenna first on Monday, October 28, so she would not miss her last volleyball game of the season that evening.

“It’s not that I want to make a big scene. It’s not just drama,” Roxanne said. “I want to speak up for the people that are not going to speak up. I do comply with everything they want–my house, my utilities, my property tax bills in my name. If I do cross one or two times, why am I going to get punished for that?”

She informed the district she would be seeking legal advice, and spoke with Gaven Norris, an attorney whose practice area includes school law, according to the Texas State Bar. Norris said he would intervene personally if the students weren’t back in school within a week of their withdrawal. Then Roxanne contacted the League of United Latin American Citizens (LULAC.)

LULAC General Counsel Luis Vera asserted that the PISD police were not authorized to operate a fixed checkpoint, and that their current operations violate the Fourth Amendment, which protects against unreasonable search and seizure.

Congress authorizes fixed checkpoints very narrowly for immigration enforcement by immigration officers and certain highway safety checkpoints, like those that check for drunk drivers, under the assumption that the checkpoint’s contribution to the public interest outweighs its interference with personal liberties.

“Outside of that you have to have probable cause to stop somebody. You can’t stop them just to stop them,” said Vera, who thinks the students’ information was unlawfully collected. “If you’re trying to find out if they’re undocumented or live there [in Mexico], but you make an illegal stop to determine that, then whatever you find out is illegal. You can’t use it.”

LULAC’s General Counsel also said that the students’ residency was established through their mother having a home and paying property taxes within the district.

The Ortiz siblings returned to class on October 28. They faced makeup assignments and missed test, and say they are struggling to catch up.

Across town, PISD police returned to the “Y” once again on the morning of Friday, November 15, to conduct another residency checkpoint.