Charlene McBride, a senior partnership specialist with 2020 Census, lead the meeting. She informed attendees of the importance of the CCC, how it works and what the community’s role will be. Marfa’s committee is a governmental CCC with Judge Guevara as the head of this committee.

McBride and three other teammates are responsible for 13 different counties in Texas including Presidio County. McBride is specifically involved with the local government, Catholic Churches and nonprofit communities. Her other three teammates will work with the healthcare communities, businesses, group quarters, non-Catholic faith-based organizations and other parts of the community.

“This time around for census, we were assigned areas,” she said.  “We all have our own areas, so when we come into a community we try to spread out and make sure all the areas are covered,” McBride said. This is the third census she has worked. “We’ve seen a lot of changes from 2010 to now, and there are still a lot of changes to come.”

McBride said that the CCC is the eyes and ears into the community and is made up of individuals who know the community and local area well. The Complete Count Committee is responsible for educating residents on who is counted in the household and who is counted individually at a worksite or otherwise. According to McBride, there are some areas that are harder to locate for the people working for census and a lot of that is because of “the lack of trust and lack of safety.”

One important facet of the CCC is their ability to recognize hard to count areas within the community such as colonias or other remote locations in Redford, Shafter, and Pueblo Nuevo – places that someone from outside the community may not be aware of. “If there are new communities or work camps [that have appeared] since 2010, we need to make sure that those areas have been included. People from New York City won’t know,” McBride said.

Federal funds, grants and support to states, counties and communities are based on population totals and breakdowns by sex, age, race and other factors –– all information gathered in a CCC.

The census is powered by representation, and Texas received four congressional seats in 2010. It’s estimated that the state will receive another four seats in 2020.

One tool used for census planning is ROAM, the Responsive Outreach Area Mapper. ROAM is a national map of census tracts shaded by predicted mail non-response rate, otherwise known as a Low Response Score. Each area is given estimated data figures that are updated periodically throughout the ten-year span between conducting a census. Through the data available on ROAM, Marfa had an LRS of 27.7%, while Presidio’s LRS was 27%.

McBride said it is estimated in the State of Texas that the average federal funding per capita is between $1,200 and $1,500.

If you take Marfa’s 27.7% LRS and divide that by the estimated population for 2017, which was 2,350 people, that equals about 651 people that were likely not counted in the last census. When you multiply the number of persons potentially not counted times the average per capita for federal funds, the total varies between $781,200 and $976,500 of missed funds per year. When you multiply that times ten, you get the estimated amount of dollars the city missed out on over the last ten years. That number is between $7.81 and 9.76 million.

There is some confusion on whether or not residents in Presidio County who do not receive mail at their door will be able to access the census questionnaire online or through the phone. “It is my understanding that you still can [go online or call in], but I don’t know exactly how that will work,” McBride said in the meeting.

“What will likely happen here is you will be part of the Update Leave,” McBride said. The Update Leave is when a census worker will go to your door and leave a questionnaire at your home. “It is my understanding that [you] will still be able to go online and answer the questions, but we are unsure if the questionnaires will have the code to be able to access the online count,” she said.

A couple weeks before the April 1, 2020 census date, a non-response list will be generated, and a census worker will go back to homes who have not responded to the questionnaire.

“There are two different forms,” McBride said. “The man camp questionnaires will be done by the management team or by census and is only seven questions [sic].” The household questionnaire is different and is where you should count children and all other people living within the household.

For people who work away from home in what the census calls Group Quarters, they will be counted where they spend 51% of their time through an individual count.

Group Quarters are defined as places where people live or stay in a group living arrangement. These places are owned or managed by a third party that provides residents with housing and/or services. Group Quarters include workers’ group living quarters, local jails and other municipal confinement facilities, state and federal prisons, nursing homes, college dorms, hospitals with patients who have no usual home elsewhere and other groups of people residing in other places.

All children, including babies, should be included on the household census questionnaire. Multiple families living in one household should count everyone living inside the house, not just the person or people who own the house. Parents who share custody of a child or children should communicate to understand who is responsible for counting the children in the 2020 Census.

The question of whether or not someone is a U.S. citizen will not appear in the 2020 Census. Additionally, census information is kept confidential and census employees are sworn to secrecy for life, not just for the time they are working for the Census bureau. According to McBride, if a U.S. Census Bureau employee discloses anything, they can face 5 years in prison or a fine up to $250,000.

The Marfa CCC is still looking to recruit volunteers. Anyone interested in joining this volunteer committee is encouraged to contact Judge Guevara. Additionally, the Census Bureau is taking applications for jobs that start training in January. The job pays $15.50 an hour, training is included and paid, and workers earn $.58 a mile for travel.

“If we want our community counted by members of our community, we need to fulfill the jobs,” McBride said. “Otherwise people from New York, Denver, or from Dallas will be coming in to do the counts for us.”

The hours for this job are flexible and job qualifications include being 18 years of age or older, having a mode of transportation and a valid driver’s license. People who turn 18 before the job begins can still apply. Responses to applications will be returned within six weeks to two months due to a required background check. People interested in applying must do so online at 2020census.gov/jobs.

The next meeting for the Marfa CCC is Thursday, December 12, 1:30 PM at the Presidio County Courthouse. 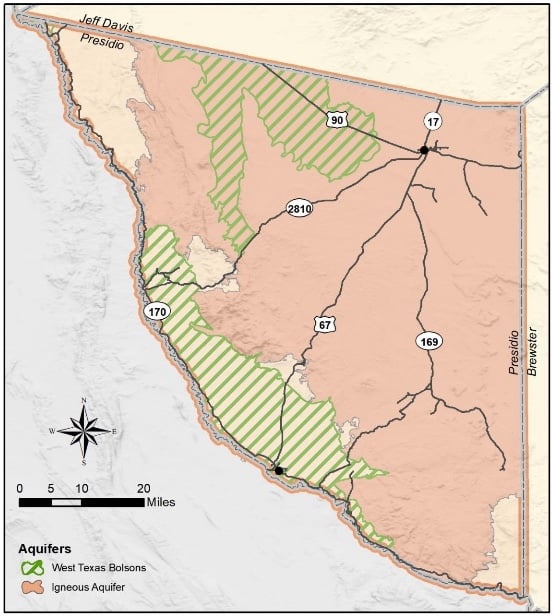