State Rep. Poncho Nevárez turns himself in to authorities after dropping envelope with cocaine 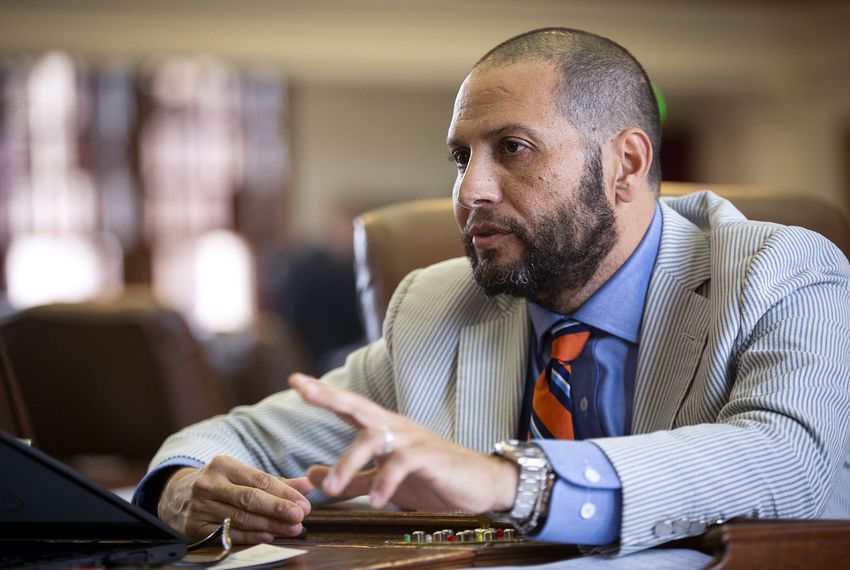 State Rep. Poncho Nevárez, D-Eagle Pass, announced earlier this month that he would not seek reelection to the lower chamber in 2020, saying in a statement he “must heal up for the rest of what may come in my life.” Photo credit: Juan Figueroa/The Texas Tribune
Subscribe

By Patrick Svitek - The Texas Tribune

AUSTIN – State Rep. Poncho Nevárez, an Eagle Pass Democrat and House committee chairman, turned himself in to authorities to be booked on felony drug possession charges Thursday evening and was released after posting his bond of $10,000, according to both the lawmaker and the Texas Department of Public Safety.

“I did,” Nevárez said in a text message Friday to The Texas Tribune. “Last night in Maverick County.”

A statement from DPS said the investigation involving Nevárez “remains active and no further information is available at this time.”

Nevárez arrived for booking hours after authorities issued a warrant for his arrest. That arrest warrant cited surveillance footage of the lawmaker in September dropping an envelope with cocaine as he was leaving the Austin airport.

Before the warrant was issued, Nevárez, chairman of the Homeland Security and Public Safety Committee, confirmed to the Tribune in a statement that the “news is true” — and that the events detailed prompted his recent announcement that he is not seeking reelection.

“I do not have anyone to blame but myself,” Nevárez said. He also mentioned he plans to seek treatment.

The lawmaker faces a charge of third-degree felony possession of a controlled substance. That carries a maximum punishment of 10 years in prison.

That affidavit, filed Oct. 29 in Travis County by DPS, stated that, on Sept. 6, surveillance footage showed Nevárez exiting an area of Austin-Bergstrom International Airport used by traveling state officials. Nevárez then entered a black SUV owned by his chief of staff and dropped “a white paper object,” the affidavit said. The envelope, according to the document, had Nevárez’s official House seal on it and contained “four small baggies.” The total weight of the contents, according to the affidavit, was roughly 2 grams.

Last week, Nevárez had two unexpected announcements that took even his colleagues by surprise. On Nov. 6, he announced his office would deactivate its Facebook page — but provided no reason for the move. Two days later, Nevárez announced he would not seek reelection in 2020.

Nevárez, an attorney in Eagle Pass, also serves as vice chair of a select committee that state leaders formed two months ago in response to the deadly shootings in El Paso and Odessa.

Nevárez’s mounting legal problems set off an exchange later Friday between House Speaker Dennis Bonnen, R-Angleton, and some of his committee chairmen about potentially stripping Nevárez of his own leadership posts.

After news broke that Nevárez turned himself in Friday, three chairmen, all Republicans, wrote to Bonnen asking for Nevárez to be removed as chairman and member of the Homeland Security and Public Safety Committee, as well as vice chair and member of the Select Committee on Mass Violence Prevention and Community Safety.

“It appears that Representative Nevarez is prepared to accept responsibility for his actions and we are hopeful that he is fully committed to getting any physical, mental, and spiritual help that he needs,” the chairmen wrote. “Nonetheless, as House Members and Committee Chairmen, it is our responsibility to ensure that the important work of this legislative body and the trust bestowed on our Chamber by the people of Texas is never compromised.”

The chairmen also asked that cocaine incident be referred to the General Investigating Committee so that it can “determine if any additional Texas laws or rules of the Texas House have been violated.”

Bonnen responded with his own letter, saying the speaker of the House doesn’t have the power to remove committee members. Regarding an inquiry by the General Investigating Committee, Bonnen encouraged the lawmakers to “direct your request” to the panel’s chair.

“State Rep. Poncho Nevárez turns himself in to authorities after dropping envelope with cocaine” was first published at by The Texas Tribune, a nonprofit, nonpartisan media organization that informs Texans — and engages with them — about public policy, politics, government and statewide issues.