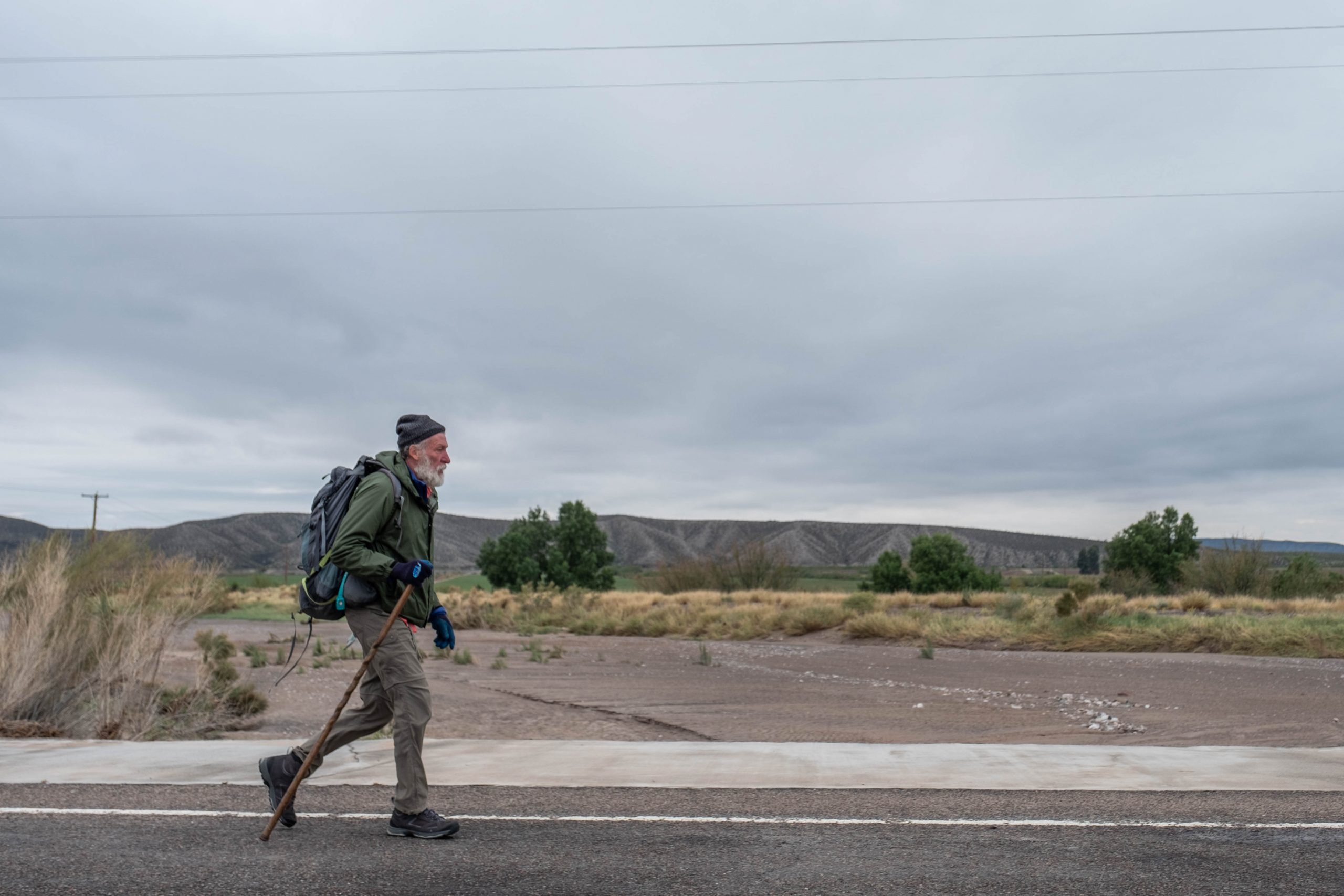 Mike Hull walks along the U.S.-Mexico border near the Big Bend. Photo by Sarah Vasquez
Subscribe

PRESIDIO COUNTY – Mike Hull felt overwhelmed but grateful as he stood on the Bridge of the Americas that divides El Paso and Ciudad Juarez on November 24 –– it was a moment that signified the end of a 992-mile walk along the U.S.-Mexico border.

“So many people helped put me on that bridge,” said Hull.

The Austin-based attorney spent the last two months walking for a project he called This Land, in reference to the folk song by Woody Guthrie. Carrying only a backpack with necessities and a walking stick, Hull started his walk on October 3 at Boca Chica Beach outside Brownsville, where the Rio Grande falls into the Gulf of Mexico. He set a goal to walk an average of 20 miles per day before sunset to provide safe traveling among cars and loose dogs. He scheduled his trip to end before Thanksgiving so he could spend the holiday with his daughter who was home from college.

The purpose of the project was to simply listen.

“That’s about it. I wanted to listen,” said Hull. “In the beginning, people not from the border were telling lots of stories about the border and those stories didn’t match my experience.”

Hull said the news he would read or watch about the southern part of the state were mostly negative, but that narrative didn’t mirror what he’d seen or heard. Traveling on foot, rather than on a bike or in a car, provided more opportunities to listen to the land, the water and the people.

Every day, he posted a video on the project’s Facebook page, This Land 2019, often before and after every walk. Sometimes he shared an update on his journey, and other times he shared inspirational messages, not only for himself but for those monitoring his walk. People could also follow his trek through a tracker Hull wore that updated an online map every two and a half minutes.

He reached the Big Bend region in early November. When he arrived in Marathon from Del Rio, he posted a video standing at the intersection of U.S. 90 and U.S. Route 385 and asked himself if he should continue down U.S. 90, which would take him through Alpine and Marfa, or travel down Route 385 to Big Bend National Park where he could continue to walk along the Rio Grande. He chose the latter, hitching a ride from a stranger in Marathon and continuing his trek on FM 170, also known as River Road because the Rio Grande runs parallel to it.

It was chilly and sometimes raining during his time in Far West Texas, but Hull maintained his daily goals as he walked through Terlingua, Lajitas and Presidio until he reached Candelaria. He occasionally paused to listen to the sugar cane rustling in the wind or to the Rio Grande flowing between the two countries.

One morning, he came across a mountain lion in the distance and, instead of grabbing his phone as one does in this social media world, he took in the moment and watched it cross the road from afar.

“I thought if I do that, I won’t get to see,” said Hull. “So I just watched this and he or she stopped and watched me. And I don’t know, it was magic.”

Drivers, including local law enforcement and U.S. Border Patrol, would sometimes stop and ask him if he was okay or needed any help. Hull said all of these interactions were friendly. Some would give him water or food. Others would chat with him about his project. What he heard from the border communities he visited echoed what he believed.

“People here have been uniformly nice, kind, respectful,” Hull told The Big Bend Sentinel during a walk on River Road. “They say we’re so much more than whatever turmoil is at the border, not taking sides on that. It’s just we’re so much more than that. Between education, culture, food, art, dance and music, people just living their lives being nice to each other.”

Hull caught a ride from Candelaria to Valentine to continue his walk down U.S. 90 until he reached Highway I-10 in Van Horn. From there, he walked to El Paso. Hull said that in the beginning on Boca Chica beach, El Paso seemed impossibly far away, but completing the walk made him feel hopeful. He was and remains surprised by what he saw in the border regions he passed through, and how they were at times misrepresented in the national news.

“I learned how fantastic people are, how hopeful, how kind and generous,” said Hull. “I saw how people continue despite the seeming odds against success. I saw hope.”