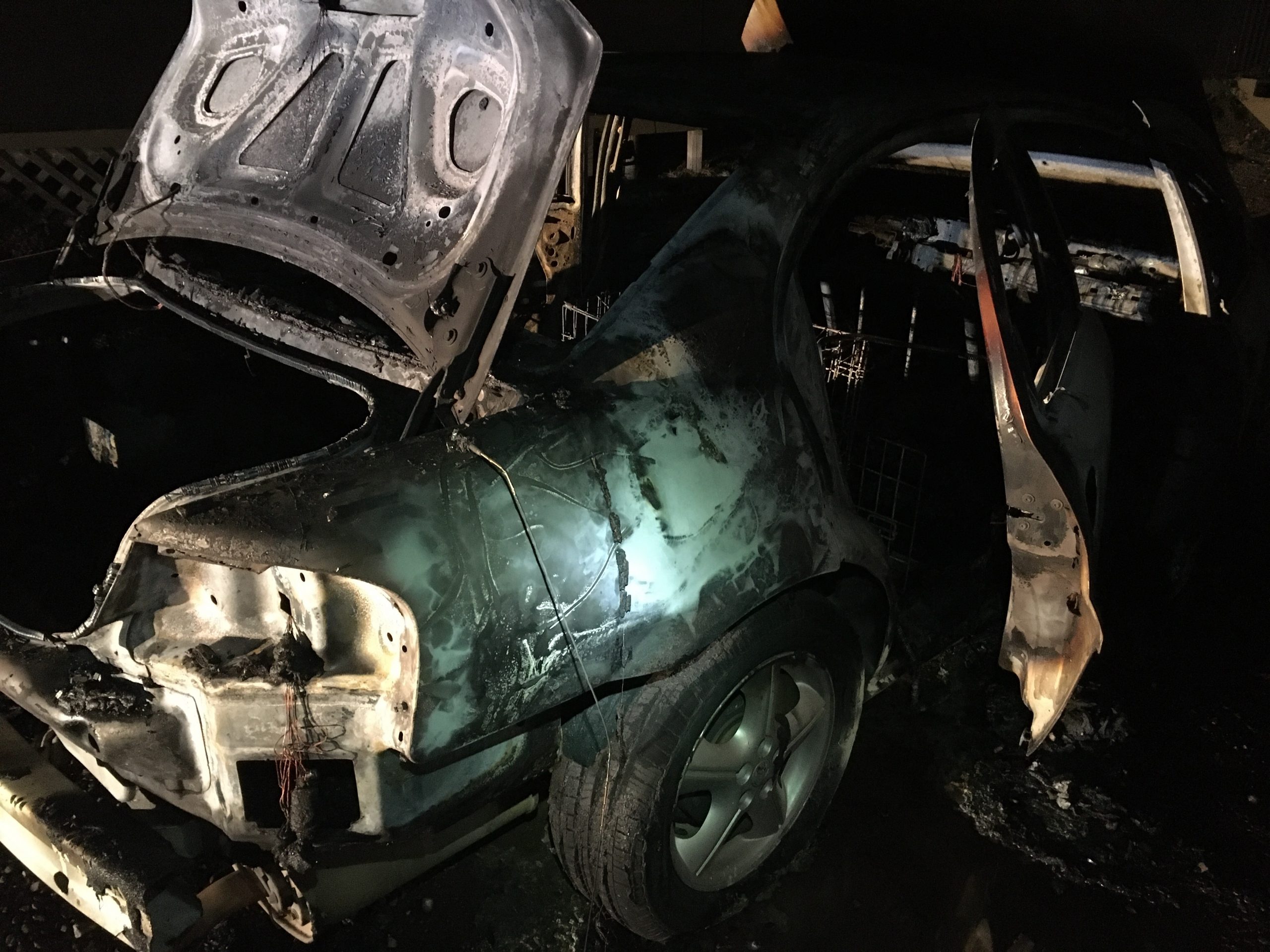 MARFA — At around 9 p.m. last Friday, barbecue restaurant Convenience West was closing up for the night, and co-owner Kaki Aufdengarten was outside with a small group when a young woman walked up.

The young woman joined the conversation suddenly and talked about being run out of town, according to Aufdengarten. “She definitely believed she was being mistreated by the local authorities,” she said.

The woman then allegedly told the group she had set her car on fire. They looked down the street at Mando’s restaurant, where smoke was billowing up and people at an adjacent apartment complex were moving cars away from the flames and dousing the building with water. Aufdengarten went inside to call the police, who said they had already heard about the fire. When she came out, the woman was gone.

The woman — Kayla Nicole Johnston, 20, from the Dallas/Fort Worth area — was arrested a short time later across town, near the Marfa Dollar General, and taken to a psychiatric hospital in San Angelo. She is expected to face felony arson charges, police said.

Johnston, who had been in Marfa for less than a month, was perhaps best known as the owner of a pet pig. She also went by another name, Emma.

According to police, Johnston used candles to start the fire in the interior of her car. No one was injured, but police said at least two other cars were damaged.

In an interview with The Big Bend Sentinel on Sunday, Aufdengarten was still shaken up by the experience. “You could tell she was not well,” she said of the young woman.

Gary Mitchke, chief of the Marfa Volunteer Fire Department, helped respond to the scene. The fire was allegedly “intentionally set” and “could have been a lot worse,” he said.

“The proximity to adjacent buildings was very close,” he added. “If the wind had been a little different, we could have had some bigger issues besides just a car fire.”

In the days before Friday’s fire, there were signs that Johnston’s time in Marfa was unravelling. Last Thursday and Friday, at least four people filed police reports against Johnston, accusing her of trespassing, threatening people and stealing.

On Thursday — Thanksgiving — a manager and another employee at Hotel Saint George both requested and received criminal trespass warnings after Johnston allegedly made threats to employees, according to a police report made by a hotel manager.

Then, on Friday, a Marfa resident filed a police report after a security camera showed an unfamiliar person pacing on the resident’s porch. An officer reviewed the footage and recognized Johnston, and another criminal trespass warning was issued, according to a third police report.

That same day, the Stripes convenience store on Marfa’s east side also called police after Johnston was allegedly “taking and consuming product without paying for it,” according to a fourth police report.

An officer escorted Johnston to her car to look for cash but Johnston reportedly couldn’t cover the merchandise. She was cited for theft of less than $100 and received another criminal trespass warning, the report states.

At press time, police had not yet released public documents on the car fire. Johnston, who has been confined under an emergency detention order, could not be reached for comment. Her family declined to comment.

Nicholas Schmidt, 27, said he first met Johnston at a Walmart in El Paso. An employee at Hotel Saint George, Schmidt is also relatively new to town, having just arrived here around a month ago, he said.

In an interview with The Big Bend Sentinel, Schmidt said Johnston approached him in El Paso and started talking to him about Marfa. She was living out of her car with a pig and “seemed like she was running from something,” he said. He offered her a place to stay in Marfa.

Schmidt told police that he had offered Johnston a place for a night but that she wouldn’t leave. Johnston then allegedly began threatening to kill him. “I was living in fear for a few days,” he told The Big Bend Sentinel. After he kicked her out, he said he started locking his doors.

On his first day of work — Thanksgiving — Schmidt said he arrived at the Hotel Saint George to find Johnston. She again allegedly threatened to kill him, which is when he says both he and the hotel asked for criminal trespass warrants.

Schmidt said he was frustrated with how police handled the situation. “This was a huge example that we do have holes in the system,” he said. “It had to escalate to arson for police to take it serious. I feel like a death threat is enough.”

In interviews with The Big Bend Sentinel, Steve Marquez, chief of Marfa police, said he understood why some residents thought Johnston should have been detained earlier. But he said he had to balance concerns for public safety against Johnston’s right not to be detained without cause.

“Just because [someone is] mentally ill doesn’t mean they don’t have rights,” he said.

Police were “trying to come up with any kind of way” to detain and get Johnston psychiatric help, he said. But trespassers couldn’t be arrested on their first warning, especially when there was no signage, he said.

When pressed on the death threats, Marquez said Schmidt had declined to press charges and only requested a trespass warrant.

“No one wanted to press charges,” Marquez said. “Everywhere we went, we were running into dead ends.”

Schmidt disputed this characterization — telling The Big Bend Sentinel that he did not know he had the option to press charges.

Marquez — like many Marfans — isn’t exactly sure what happened to Johnston’s pet pig but welcomed information from the public. “We’re more concerned with [Johnston] and what she was doing around town,” he said.

Still, he confirmed that one rumor is false. The pig wasn’t killed in the car fire, he said.

On Friday, Marfa police had to call a mental health crisis worker in Alpine, and an officer took Johnston to San Angelo — around four hours away. Mental health care in Marfa was “limited,” Chief Marquez said.

Luckily, he said, Johnston had insurance.

“Most of these hospitals won’t even look at us unless the individual has some form of insurance,” he said.

For some Marfans, the fire was a reminder of the struggles people with mental-health issues sometimes deal with in the Big Bend region, where health care resources of all kinds are often stretched thin.

John Paul Schwartz, a family medicine doctor at the Marfa Country Clinic, often finds himself helping patients with mental health issues. But there’s a limit to the services he can offer because he isn’t a licensed counselor, he said.

In an interview, he described mental health care in the region as a patchwork of law enforcement, school workers, religious groups and informal support networks like Alcoholics Anonymous. Making the problem worse, he said, was an ongoing stigma around mental health in the Big Bend.

“The county needs to really apply for some grants,” he said. “They need to set up a dedicated office for mental health.” By working together, he believed local leaders could improve access to mental health services in the region.

He cited one example, from the early 2000s, when a group met to discuss access to mammograms in the region. A hospital in El Paso eventually agreed to send a mobile unit on regular rounds through far-out places like Presidio and Terlingua.

Aufdengarten, the co-owner of Convenience West, thought Marfa could be a rough place to have a psychiatric crisis. On one hand, Marfans are neighborly and will “help you whether you want it or not.”

But “everything here is under a microscope,” she said. Rumors spread quickly. “Whatever happens at the Lost Horse, they know at Buns and Roses by the end of the day,” she said, referring to businesses on either edge of town. It’s the worst fear of anyone with paranoid delusions: that everyone really is watching them.

“It happens very frequently that people get out here without all the things they need,” she said. That could mean jackets and sunscreen. Or it could be medication, a support network, a home.

For those in the Big Bend struggling with mental health issues, the Family Crisis Center of the Big Bend, a local nonprofit, offers help for people suffering from abuse and sexual assault and can be reached 24/7 at 1-800-834-0654. PermiaCare, a local community center, offers emergency mental health services and can be reached at 1-800-542-4005. The National Suicide Hotline is available at 1-800-273-8255.