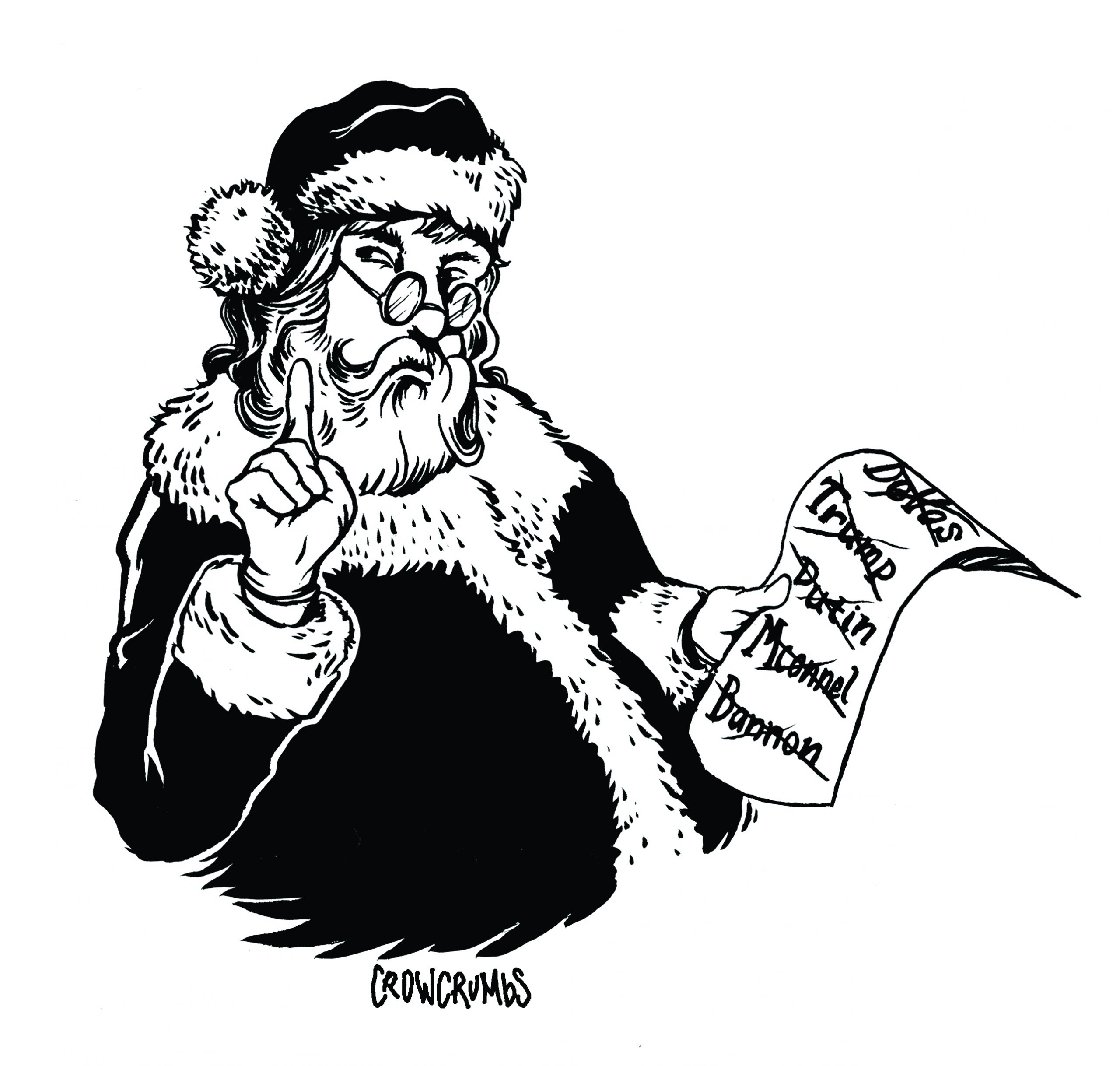 I am not writing to request any particular present for myself, but I would like to see you convince the Russians to give the Crimea back to the Ukrainians. If this request cannot be fulfilled, you might give the Ukrainians enough Javelin anti-tank missiles like the ones President Tweet promised but delayed in delivering in a poorly-hidden extortion attempt.

Saint Nicholas, don’t be confused by Apple Corp. or Google’s maps that show the Crimea is part of Russia. We should not encourage schoolyard bullies armed with tanks, missiles and cluster bombs.

Saint Nicholas, I’m certain you’ve noticed that Russia’s president, President Tweet and the entire Republican Party have spread more lies than the rest of humanity has in the last ten thousand years. In other words, they have all been very, very naughty – if not downright nasty.

Saint Nicholas, I’d like to make a request for the Kurds. They’ve been betrayed by world powers so many times that they now say, “The Kurds have no friends but the mountains.” The French and British betrayed their promises at the end of World War I, and most recently, President Tweet betrayed them by removing American troops in Syria and allowing the Turks to attack the Kurdish people again. I would like to point out that the Kurds have been the only reliable local allies we have had in the two Gulf Wars.

Saint Nicholas, I’d also like to point out that the Turks destroyed Constantinople in 1453 and your Christian Byzantine Empire.

Saint Nicholas, if the wise men were so wise, why did they tell King Herod they were searching for the child who would become King of the Jews when they had to know King Herod was a megalomaniacal, semi-insane tyrant who would not tolerate any competition for his kinghood? He then ordered all male children under the age of two in the Bethlehem area be put to death. Knowing this was not fake news, Joseph, Mary and baby Jesus headed for Egypt on the family donkey. If they tried the trip today, they would face rocket attacks from Gaza, strafing by fighter jets and land mines.

Archeologists have recently discovered graffiti in the ruins of Jerusalem’s Great Wall that the people referred to him as Herod the Great Tweet. If so, he would probably would have sent the following Tweet to the pharaoh in Egypt, “@Pharaoh: I hear you are having trouble with the Nubians on your southern border. Have you ever considered building a wall? If it is too costly, I would consider sending you several thousand spears if you’ll do me a favor. The Greeks call these spears Javelins. It is a catchy name and you know how the Greeks are at inventing words. A family of illegal immigrants are headed towards your borders. If you can’t build a wall, grab them at the border, separate the child from the parents, put him in a cage, put the parents in tents somewhere in that big desert you got and shoot the donkey.”

Finally, Saint Nicholas, I hope everyone in the Big Bend and my readers elsewhere have a happy holiday season and a great year ahead, no matter their religion or political preferences.