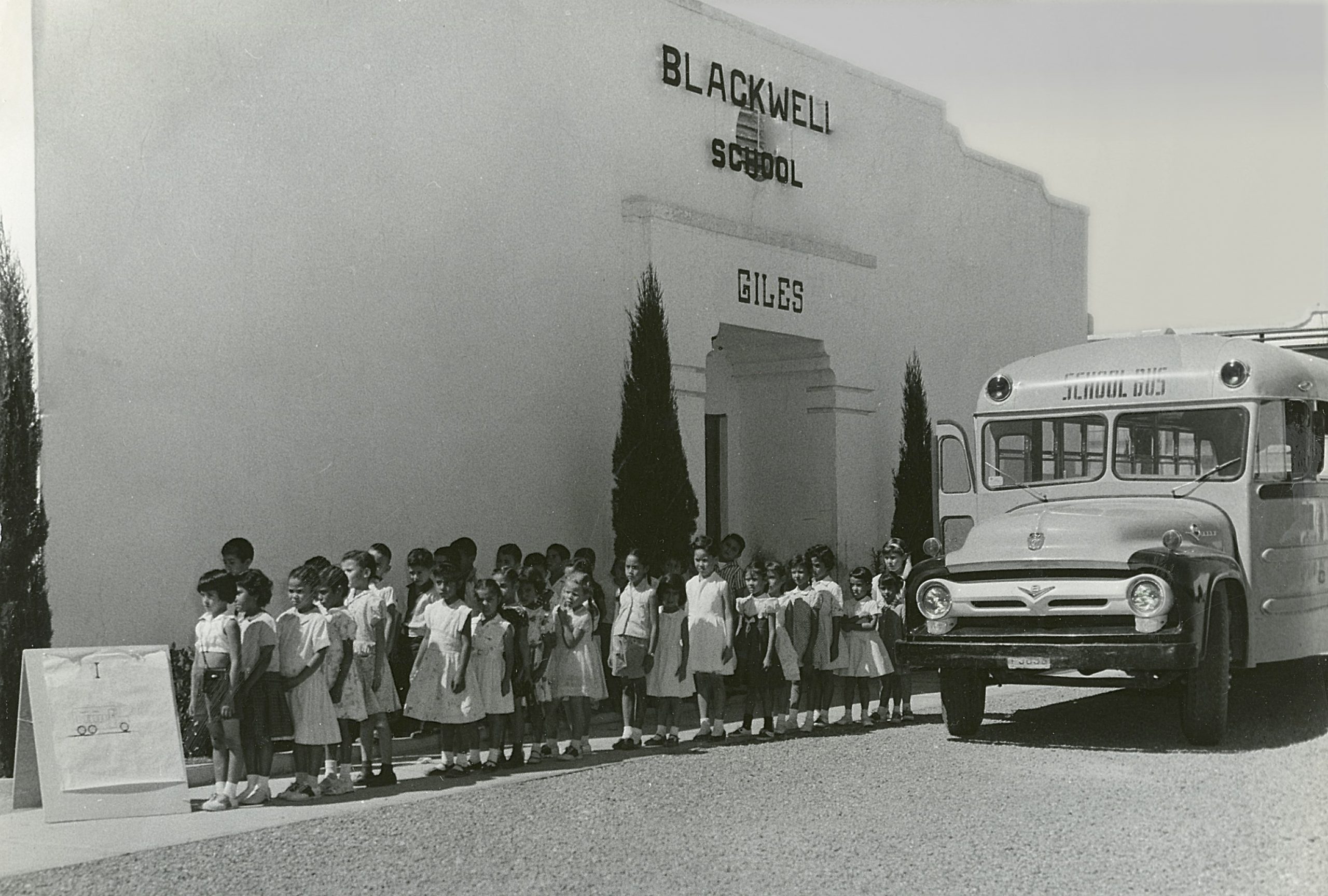 MARFA – Marfa’s historic Blackwell School, a reminder of school segregation, received an honorific designation to the National Register of Historic Places for its “significant contribution to the broad patterns of our history,” according to the application approved by the National Parks Service on December 4.

The Blackwell School, built at the turn of the 20th century by Presidio County and the local school district, provided primary school education to Marfa’s Hispanic children at 501 South Abbot Street in what is now south central Marfa.

Despite mandated segregation for African American students, there was never any national or state mandate to separate Hispanic students from their Anglo counterparts. Instead, the proliferation of segregation between those communities was de facto, mostly put into place by local school districts, and was not legally undone when the Supreme Court desegregated Anglo and African American students.

Blackwell educated Marfa’s Hispanic elementary and junior high students until 1965, when a new elementary school was constructed, and Marfa’s education system was integrated.

Bonnie Wilson, a historian at the Texas Historical Commission who worked on the Blackwell application, says, “We did look at this nomination as precedent setting, and we recognized that this property is unique because it tells the story of Texas Hispanic children’s education, which is not a topic that is often covered.”

Lionel Salgado attended Blackwell from 1941 to 1951, a time he recalls for its “good education, good teachers and good memories.” But today Salgado reflects on the school’s legacy in Marfa and is troubled. “A lot of it has been ignored and forgotten – and more ignored than forgotten,” Salgado says. “People for some reason don’t want to think about it, but it’s part of history.”

“One thing I talk about is how burying our past hasn’t worked,” says Gretel Enck, president of the Blackwell School Alliance. Enck brought her background of nearly 20 years experience working with the National Parks Service to her role at the alliance.

Enck previously worked at the Manzanar National Historic Site, the location of America’s Japanese internment camps during World War II. “I saw the power of that place being preserved and people being encouraged to tell their stories and really reclaim their voice around the violation of the Constitution that happened with internment,” Enck said. “The Blackwell School is a very different story, but at the same time, it’s coming from the same place: devaluing people who are different from the people in power.”

Enck says, “I just believe very, very strongly in the power of storytelling and people being able to claim their stories.” When she speaks about the past being buried, there’s one literal instance that many Blackwell students recall.

The application for the National Register includes a narrative about a 1954 incident at Blackwell, where students “buried Mr. Spanish.” A seventh grade class was instructed to write “I will not speak Spanish” on paper scraps, place them in a coffin and, during a schoolwide gathering around the flagpole, bury the box in a ceremony. The teacher later explained her intention was to help students learn English and lose their accent.

After the burial, students were paddled for their language transgressions. As Maggie Marquez recounted to The Big Bend Sentinel in 2007, the school’s principal paddled the young student after she told her classmates, “Nadie me va quitar mi español. No pueden hacernos esto. [No one’s going to take away my Spanish. They can’t do that to us.]”

“Even some of our grandkids don’t even know about it, some of the students’ grandkids,” Salgado says about Blackwell and its history. “I’ve mentioned it to my grandkids. I’m proud of it. It happened, and it’s part of history. By not mentioning it, it’s not going to go away. It happened.” Recently, Blackwell has initiated an effort to bring today’s Marfa students into the space to educate them on Marfa’s past.

Compiled over three years, the application to the National Register included narratives from former students and teachers, which it relied on heavily, since, according to Enck, the school district burned the Blackwell records in the 1950s.

Along with oral histories, the application detailed a historic structure report of the two remaining Blackwell School buildings (the other structures were destroyed to make way for low-income housing after the school’s closure.) It even answered one long-standing mystery: when the Blackwell School was actually built.

Late local historian Lonn Taylor had volunteered time doing deed research for the Blackwell School Alliance, uncovering documents that disputed a long-running oral history that Blackwell was built in the 1880s. The deed revealed the founder of Marfa, John M. Dean, sold the Blackwell land to the county in 1909, and construction began immediately after.

The physical building is crucial to its placement on the register. Wilson says it is “representative of that face of Marfa that we might not see. It’s the face of the Marfa community and is still, symbolically, an important place for that community.” Though segregated Hispanic schools were prolific across the Texas/Mexico border, few remain standing, much less in their near-original condition.

Blackwell’s addition to the National Register of Historic Places opens the school up for tax credits to complete renovations and improvements. It also broadens grant opportunities, which the Alliance could use to implement more exhibits in the space, and toward their goal of hiring an executive director this year. The Permian Basin Area Foundation and its Tillapaugh Public History Fund have already contributed $25,000 toward the position’s salary.

Wilson, the historian from the Texas Historical Commission, says Blackwell is likely the only segregated Hispanic school on the register in Texas. In Alpine, the segregated Centennial School is an office building. In Marathon, the Hispanic schoolhouse is eroding into the ground. Fort Davis’ building is gone.

Blackwell’s endurance is key to preserving the history of Texas segregated Hispanic border schools. In 2006, a group of alumni formed the Blackwell School Alliance, and fundraised to repair the building’s exterior. Today, visitors can explore the schoolhouse during open hours and learn more of its history.

“What we’re understanding now is that we preserve an incredibly authentic physical space that is the portal to connecting to a much bigger story,” Enck says. “The ongoing American conversation around identity and othering and all of those other things that we really have both the obligation and the opportunity to speak to. Part of it is that nobody else is doing it.”

“Blackwell presents the real history of Marfa, the Hispanic history of Marfa, which might not be as well known as the contemporary art history that’s going on in Marfa right now,” Wilson explains. “This nomination illuminates this history – about a popular, well known city – that a lot of people don’t know unless you grew up there and lived there.”

When Wilson mentions location as a unique factor in the Blackwell application, she’s speaking about the booming tourism and art scene that a tiny, remote town in West Texas somehow came to possess. Wilson says the outsider’s perspective of Marfa today differs from what Blackwell is presenting.

The designation itself “tells the rest of the nation, ‘this place is important,’” the historian says. “It has critical importance and meaning to people who grew up and live there, who made friends, whose family lived there. It’s more than just a school. It’s an integral part of [the Hispanic community’s] culture and their past. It’s not just a segregated story. It’s about that community, their family, and friends, and all the opportunities the school gave them.

Salgado credits the Blackwell Block Party as “one of the greatest things that happened at the school, because it brought all of the people of Marfa together, and it gave us a chance to show the people of Marfa that we are in this together,” Salgado says of the yearly event. “That’s the idea of being one community, together; Together we can do a lot of things.”

The Block Party is going to grow in 2020. Along with the April 25 celebration, a series of meetings on April 23 and 24 will gather community stakeholders to address conflicts and seek resolution through a series of gatherings.

These will be facilitated public meetings, where the alliance plans to listen, brainstorm and receive input. “Now we’re on the national register, what do we do with that and what do people want to see happen here?” Enck asks.

“How do we make sure all of the voices are heard, the divergent, challenging voices?” Enck asks. “Let’s hold space for that too, because if this is going to work, it’s going to require all the support of all of Marfa. And I think there’s hope for that.”

“Burying our past has not healed our community,” Enck says, “If there is a way that the Blackwell School can be a place to really hold space for all the emotions and conversations, that would be a dream come true, if that could somehow lead to some healing and dialogue.”

“I do think that having this designation of the National Register is one step toward claiming our authority on being that place,” she says. “We have our Texas landmark, but for every one of these designations we get, it is like someone saying, ‘that is really important to our understanding of American history,’ and hopefully people are more comfortable talking about it.”