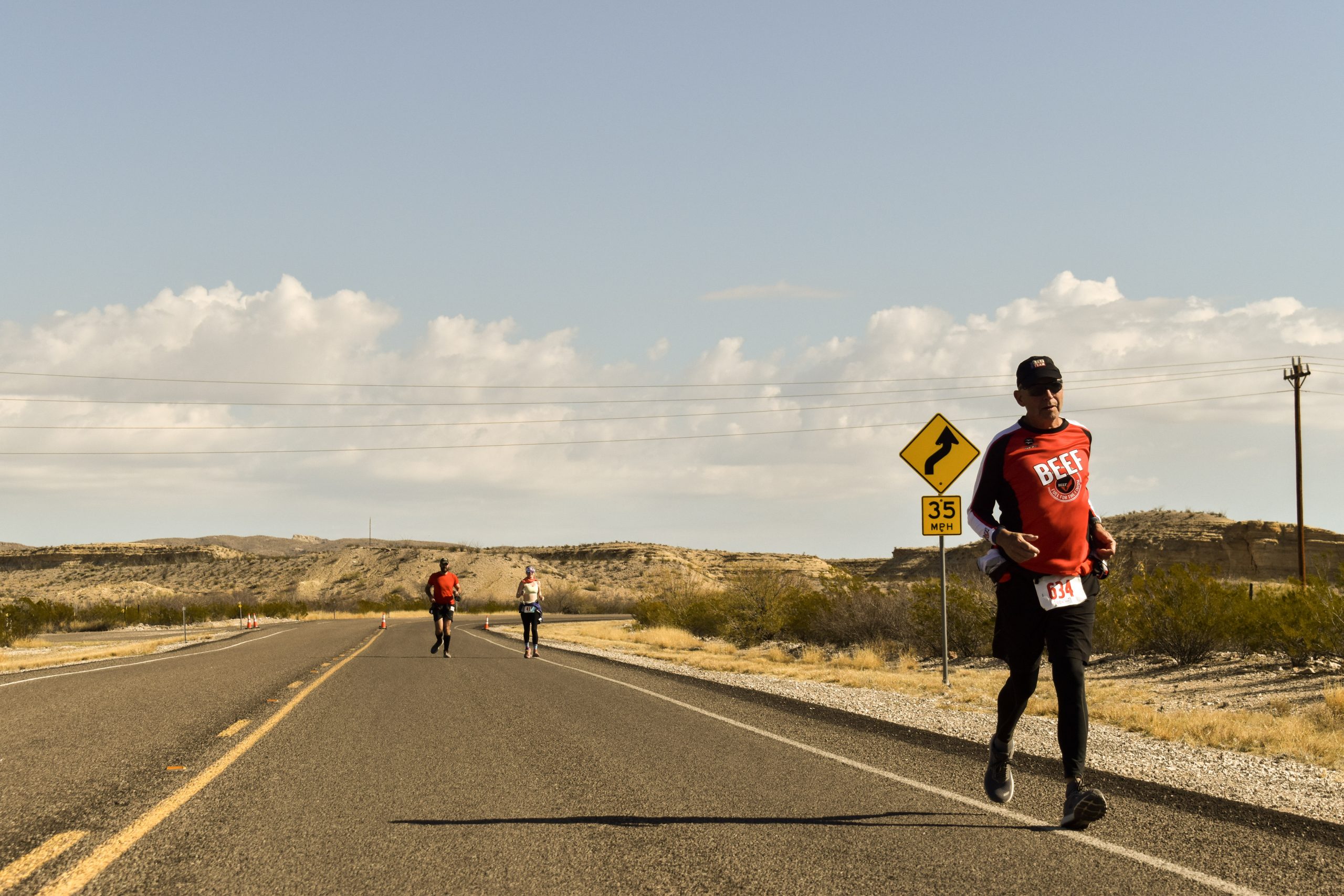 BIG BEND RANCH STATE PARK — Overland Race Management successfully completed their 16th annual Big Bend Ultra race this weekend at the Big Bend Ranch State Park, bringing hundreds of visitors from all over the United States to the state park. This is the sixth year the race was held in the state park, moving from Big Bend National Park in 2015. Throughout the last six years, Overland Race Management has worked with the state park’s friends group, Compadres del Rancho Grande, to donate more than $90,000 directly to the park.

“Because of [the Ultra’s] close support of the park and what it does for our park’s friends groups, it provides a stable funding source,” Park Superintendent Nathanael Gold said. “I view this race as a partnership with Overland Race Management, and we really enjoy the relationship we’ve created over the last six years.”

The Compadres were there all day helping out with the race. The friends group was responsible for providing and serving the post-race meal on Sunday to runners and volunteers. There were 398 registered participants for the Ultra, which is the most they’ve had yet, and 333 runners started the race throughout Sunday morning.

Runners took off from the Barton Warnock Visitors Center. The Big Bend Ultra offers several different course options, including 50 mile, 50k, 30k, 20k, and 10k runs. This year was the first year for the 20k.

“The 20k is a good in-between for people who aren’t quite ready to do the 30k but want to challenge themselves more than to run a 10k,” Patrick Hillery of Alpine said. Hillery was running with a dislocated shoulder, which he said made his balance kind of difficult, but that it was overall a good time.

Runners said the course is rugged and unforgiving. It is a mountainous terrain that can be challenging to hike, let alone run through. A lot of the 50 mile and the 50k course ran through Fresno Creek, with the high point being around the base of the Solitario mountain range.

Bert Whittaker from Springbranch, Texas ran the 30k course with a cream-colored zapeta around his waist and huarache sandals on his feet, and says he was inspired by the Tarahumara indigenous people living in Chihuahua, Mexico, who are known for their renowned long-distance running abilities.

“The race was beautiful, the temperature was great, the terrain had some tough areas –– some gullies you have to go in and out of,” Whittaker said, “but it is a beautiful course.”

The biggest loop is 50 kilometers, and the 50 mile runners take the 50k trail first, come back for a short break, and then hit the 30k trail. The elevation gain throughout the course ranges from almost 1,000 feet, up to a 1,881 foot gain, with the 50k course maxing at a 3,461 foot elevation.

Big Bend Ranch State Park is the biggest state park in Texas, with more than 300,000 acres of rugged outdoor offerings. Most of the trails are not accessible via motorized vehicle, which can make aid stations difficult to access. There were about 15 bike patrol volunteers, all with some degree of medical training, who rode the course to help runners when needed. The bike patrol volunteers included medical doctors, registered nurses and people certified in wilderness advanced first aid.

“It’s important for runners who are on the trails, because there is no cell service, but we carry two handheld two-way radios and that allows us to be in communication with the park and incident command for the race,” bike patrol co-captain Charlie Angell said. “By being mobile like this, we are able to identify distressed runners, or runners that need assistance. We can be the first responder on site to help and then get them back to the park for better care.”

The distance between aid stations on the course is approximately five miles. All the bike patrol members carry extra water and supplies in their packs.

Barrett Durst, former BBRSP superintendent from 2010 to  2015, ran on Sunday and, in one word, he said the experience was amazing. “I was out on the trail and I was thinking, ‘Oh my gosh, I am so excited to be here and to be visiting and seeing this actually take place,’” Durst said. “What a wonderful event, because it’s supported so well and helps this area so much.”

“All the benefits go back to the park, which is amazing because this place could not operate without something like this,” Durst said.

This time last year, the government was closed during the longest shutdown in history. Although Big Bend National Park stayed open, the visitor centers and areas otherwise occupied by national park employees were closed, which limited reservations among other things. This weekend, the Big Bend Ranch State Park experienced more than a 100% increase in traffic from the year prior.

According to Scott Whitener, superintendent of the river corridor of BBRSP, the state park welcomed 2,100 visitors in January 2018, and 4,200 visitors a year later in January 2019. “There were close to 60,000 people there for the entire year in 2019, versus 3 years ago there would’ve been maybe 18,000 visitors,” Whittaker said.

The state park is unique in its remoteness and size. “What we offer here is much more of a primitive experience,” Whitener said. “You can’t drive up to a campsite, you aren’t driving up to an overlook. To experience the resource, you have to absorb it by getting into it and there is no way around it.”

Whitener said they don’t plan on changing the ruggedness of the state park, and they don’t want to pave its roads. “We want to know that the 315,000 acres will remain 315,000 acres that you have to get out there to experience it. It’s not going to be easy, but we hope you take full advantage of it.”

“Sometimes it’s hard to see the park that you’ve been enjoying the loneliness and solitude of turn into this center point of where everyone is now figuring out it’s out here,” Whitener said. “Seeing numbers where you double or triple your revenue and visitation in a year, that can be kind of scary when you’re trying to play catch-up on budgets.”

Compadres group president Anne Adkins says the group’s main goal is to bring visitors to the park. “This race has been the primary fundraiser for the Compadres group.”

“It’s a unique place in Texas, maybe a forgotten place,” Adkins said. As people are traveling more domestically versus abroad, Adkins said, people are trying to find more special places to visit, and this is right in their backyard.

The Compadres group recently put up a bird blind and got a $5,000 grant for the second bird blind that they are working on building.

One of the values of having an organization like the Compadres, Adkins said, is if money is going in through the group, 100 percent of it is going directly into the park, where as if it is donated to Texas Parks and Wildlife, funds getting allocated in different ways and amounts.