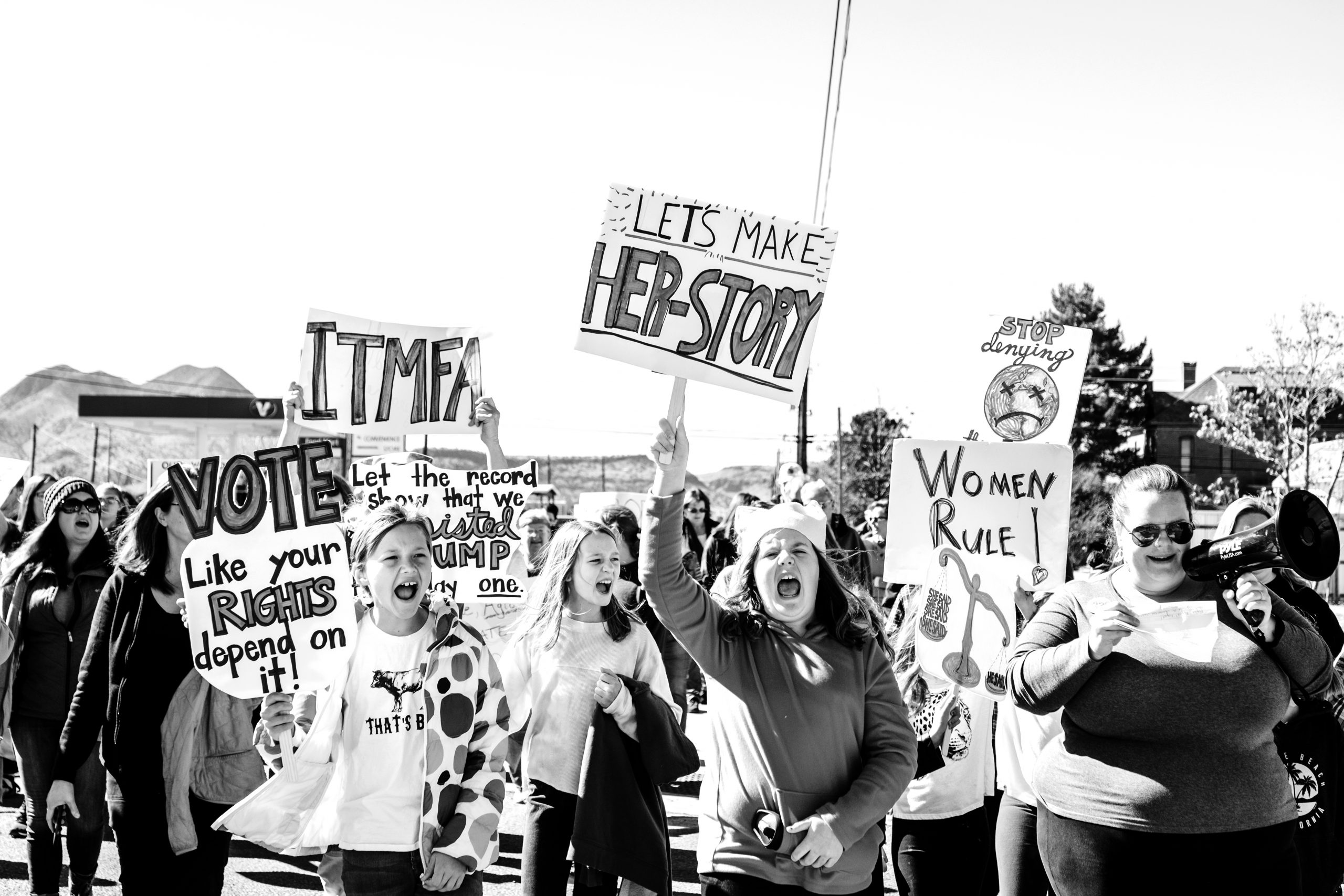 ALPINE – The girls of Lumber Club Marfa chose marching over their usual stool-making operations when offered the opportunity to join the fourth annual Women’s March in Alpine this past weekend.

The Marfa and Alpine girls gathered together to make signs ahead of the event, and Eden McHugh, an 11-year-old Lumber Club member who attends Alpine Montessori was invited to give a speech during the rally.

Attendees gathered outside the Alpine Civic Center on the brisk and bright Saturday afternoon that marked both the anniversary of Trump’s January inauguration and the anniversary of Women’s Marches across U.S. cities that brought out millions in 2017.

The Lumber Club girls gathered around to discuss why they decided to attend. “I’ve been a part of the Alpine Women’s March since it started,” McHugh said. “Just because my parents influence me doesn’t mean I don’t think for myself, and I know the difference between right and wrong.”

As the girls explained their signs – poster boards with messages like “Vote like your life depends on it” and “Let’s make her-story” – Mae Bamburg gave a little more information about the recent revisions to her message. The sign she held read “Be strong! Be smart! Be brave! Be nice!” with the last of the four phrases newly scratched out.

At lunch an hour earlier, the group had discussed women and some of the societal expectations faced. “In society, girls are kind of expected to be all nice, and taking care of men and everybody and be super caring. It was sort of like…really, do we have to?” Bamburg said.

The girls describe their group as an alternative to Girl Scouts, where instead of inside activities and nature badges earned by “pretending to be a bee,” they can be hands on and creative.

The girls together explained that the Lumber Club was a space for just girls because “boys have the opportunity to do this all the time, and girls don’t,” and the group wanted an all-girl club where they could just “make stuff and have fun,” Colette Fowlkes said.

As the march down Holland Avenue and over to the courthouse lawn began, the girls took the lead, stepping in front and chanting back to calls of “healthcare for all,” “lock him up” and “V-O-T-E, we will save democracy.”

For Cynthia McAlister, it feels as dire as saving democracy itself in America. Speaking about what made her turn out to march for the fourth year in a row, McAlister said, “It’s important to stand up for all the things the Women’s March is about, but in particular I think this year and right now, for me, it’s also about standing up for our democracy and for our country. And it feels like that’s really in peril right now in a way that we have never expected. I didn’t.”

She said the issue she’s most passionate about is keeping the government out of reproductive healthcare, while Genie Mitchell added that changing immigration policies so that they’re not “self-defeating” and protecting and improving water and air quality were important to her.

McAlister waved a flag reading “RESIST” as she marched, and bystanders stepped out of local businesses as the chanting crowd headed toward the county courthouse.

From an adjacent parking lot, someone shouted, “Trump 2020!”

Brady and Jake Crump said they decided to engage with the march when they saw the protesters had “honk for impeachment” signs.

“I thought it was funny, because I heard what they were saying about democracy. Personally I’m a Republican, I believe in the Republican party. I support our president, I like what he’s doing with our country, so I’m not really for their protest,” said Alpine resident and high school junior Brady. He believed the impeachment was a waste of time, and was glad President Trump was instead focusing on Iran, signing deals and making America great again.

Brady took issue with the characterization of immigration camps, saying those in cell blocks are brought food and water daily and that the child separation policy is the fault immigrant children’s parents choosing to break U.S. immigration law.

At the lawn, the Big Bend Voter Promoters were registering people to vote. Belle Peña was the first speaker of the afternoon, encouraging protesters to practice self-cultivation through education. “Women, don’t limit yourself. Stop reaching here,” she gestured close to herself, “and start reaching further,” she said as she outstretched her arms.

Up next was 11-year-old McHugh who took the bullhorn and exclaimed, “I’m here because my rights are still being taken away. It’s 2020 people!” The middle schooler lamented women’s wage inequality, the threat of a border wall and child separation and detention.

The preteen called for action from adults, saying, “I’m asking you to speak out and vote for women’s rights because my future depends on you.”

Dr. Savannah Williamson, a Sul Ross State University professor talked about women’s issues across various identities, saying the movement could not be just for white women, heterosexual women or cisgendered women, but for “black women, Asian, Hispanic, immigrant, refugees, and women in cages.”

When Alpine resident and Navy veteran Lena Spurgin took the stage, she spoke to her generation, Generation X, and then turned the attention to Generation Z, the youth. “Young girls are fighting climate change, fighting for their bodily autonomy and these boys are helping them,” she said to the young cohort in the crowd. “Let these kids speak, listen to them, give them the benefit of the doubt. I don’t think we give them enough credit,” Spurgin said.