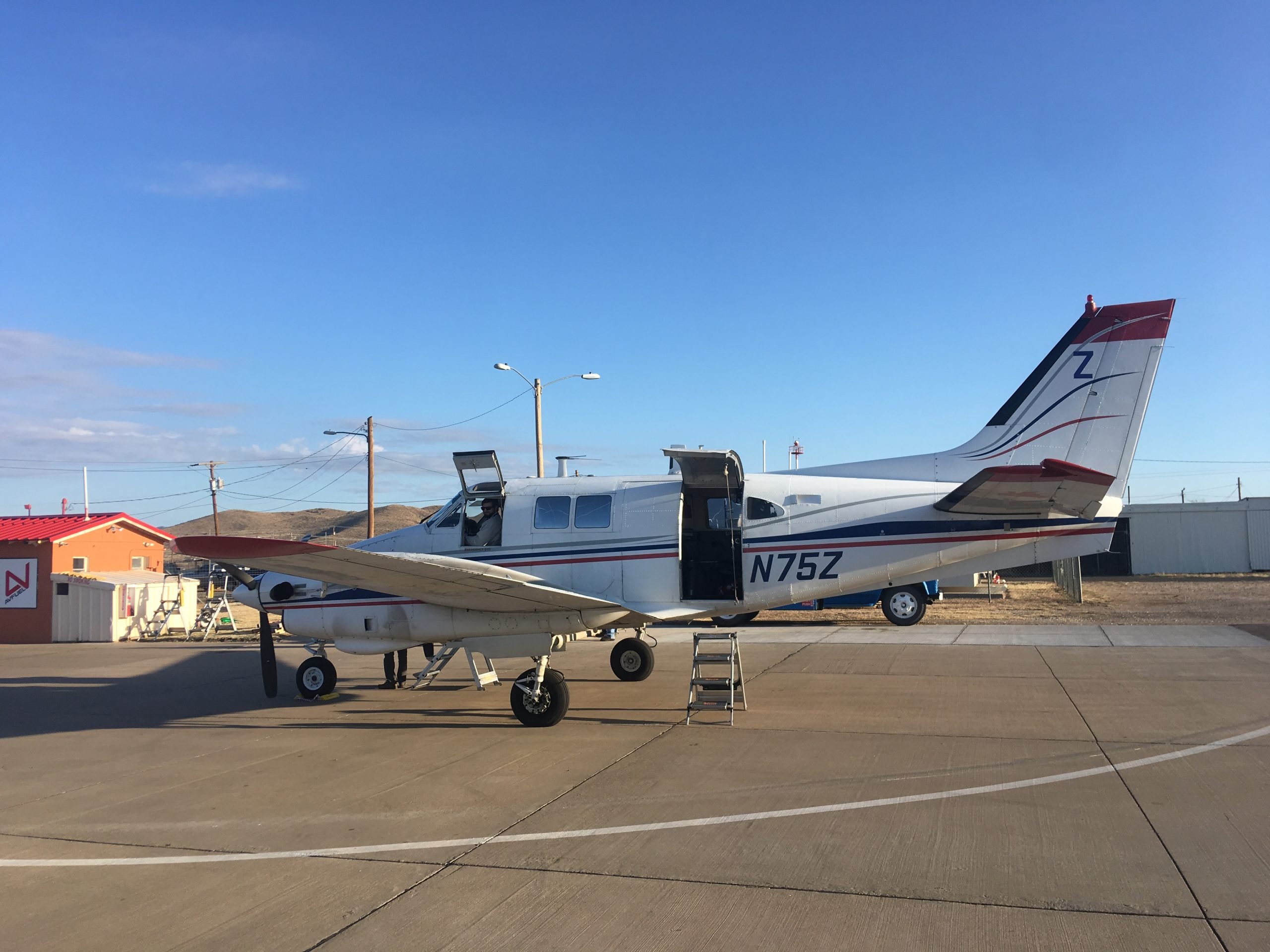 Josiah Grindrod grins out his cockpit window Sunday afternoon after completing his anti-rabies mission for the afternoon. “It’s all fun,” he says of his work dropping fish-flavored rabies vaccines over remote parts of the Texas-Mexico border. Photo by Stephen Paulsen.
Subscribe

FAR WEST TEXAS — At around sunset on Sunday, one plane — followed shortly by two others — touched down at the Alpine-Casparis Municipal Airport north of Alpine.

They’d been up in the air for about three hours, dropping baits filled with rabies vaccine and covered with a pungent substance that workers call “fish meal crumbles.” It’s part of a multi-agency operation, first started in the 1990s, that each year sees federal and state officials drop large quantities of rabies vaccines all along the Texas-Mexico border.

Josiah Grindrod, a pilot with the company Dynamic Aviation, was the first to touch down. With him was one worker from the Department of State Health Services and another from Texas Wildlife Services.

They’d flown south, over the Chinati Mountains, and unloaded an estimated 13,000 baits out of the plane, using a conveyor belt that drops them out a tube on the plane’s undercarriage. As the health workers disembarked, Grindrod grinned from the cockpit. His job at Dynamic was “very unique,” he said.

Grindrod does a variety of odd aviation jobs, including often working with the forest service in California to damp out forest fires. Once a year, though, his company gives the “all-hands-on-deck” call for workers to come help with anti-rabies efforts in the Lone Star state.

Grindrod was enjoying the work, which entailed flying over far-flung and hard-to-reach spots in Presidio and Brewster counties along the border. “To me, it’s all fun,” he said of Sunday’s mission as airport workers surrounded the plane.

Rabies was once a major problem in Texas. In South Texas in the 1980s, rabies started spreading from coyotes to domestic dogs and vice versa, particularly in Starr and Hidalgo counties. The strain soon also spread to cattles, horses, cats, bobcats, racoons and even people.

The situation got so bad that it wasn’t uncommon to see “rabid dogs in towns,” said Dr. Laura Robinson, an Austin-based official who has run the Texas Oral Rabies Vaccination Program since 2013. Two Texans died, and thousands more were treated post-bite. And since coyotes live all over the United States and have a wide range, the disease was spreading northward at a rate of about 50 miles per year.

Around the same time, fox-spread rabies also started showing up in farms and towns in and around the Permian Basin. In 1994, then-governor Ann Richards declared a rabies “state of emergency” in Texas, marking the start of anti-rabies initiatives like ORVP.

Those strains of rabies were basically gone from Texas by 2009. Robinson, the health official, now sees her role as preventing its resurgence.

“In public health, it’s always very hard to show what you’ve prevented,” she said. Sometimes, the best results are no results.

ORVP covers the entire border region except for a sliver near El Paso, where, Robinson says, rabies has never been a big problem. The operation uses vaccine airdrops everywhere with the exception of parts of South Texas, where big cities and high-population density makes it too difficult to drop vaccines out of planes.

“We wouldn’t have the control to make sure it didn’t land in somebody’s backyard or on their house or on their vehicle,” Robinson explains. “We have to turn off the machine when we’re flying over homes.” There, officials resort to other means, like dropping the vaccines out of low-flying helicopters or simply walking through the wilderness and placing them.

Robinson gave a tour around the operation at the Alpine airport. Thirty-seven people, including from the Texas Department of State Health Services and the Texas State Guard, were helping with the rabies vaccine drops this year.

Robinson stepped inside a refrigerated big rig trailer, which was stacked with boxes containing the foul-smelling baits. Taken together, Robinson said, officials were dropping well over 1.1 rabies vaccines this year at a cost of $2 million — a large number, but still a decline from previous years. “We’re down to maintenance level now,” Robinson said.

On Sunday, Robinson and her team had just come from Del Rio, where bad weather had delayed them by a couple days. The skies in Alpine were clear, though — flight conditions Robinson called “very very lucky.” In a follow-up interview, she estimated they’d be done by Tuesday.

At the Alpine airport, Robinson walked into the mobile command center, a trailer supplied and staffed by the U.S. Department of Agriculture. Inside, health workers reviewed flight logs and radioed with people in the aircraft. A ceiling-mounted television was playing a football game on silent.

One wall was covered with charts and graphs, including a large flight map that showed where workers would be dropping vaccines. The map showed three sectors along the border: one near Zapata County, one near Del Rio and another swath of land in the Big Bend south of Alpine. There were lines showing flight paths and icons indicating nearby private and municipal airports, including in Lajitas and the Cibolo Creek Ranch, in case any of the planes needed to make an emergency landing.

The rabies virus exists virtually everywhere in the world, though international health workers have declared a few countries, including New Zealand and Japan, to be “rabies-free.” Every place with rabies sees different animals act as “reservoirs” for the disease. On the East Coast, it’s raccoons. In East Texas, it’s skunks.

“Actually, skunks are the issue in probably two-thirds of the state,” Robinson said. Officials tried a pilot program to vaccinate skunks near Houston, but it didn’t work out. She suspects the baits are too large for skunk mouths.

In the borderlands of Texas, it’s typically canines like foxes and coyotes that transmit the disease. And the region is unique for another reason: the sparse population, along with a number of vast nature reserves on the Mexican side of the Rio Grande, give rabid animals plenty of hiding spots. “There’s a lot of area down south that doesn’t have much surveillance of rabies in wildlife,” Robinson said.

Here, officials focus much of their efforts on establishing a “border maintenance zone” — a barrier along the border that keeps the disease from spreading north to Texas and beyond.

So far, it seems to be working. The fox and domestic dog/coyote strains were deemed eliminated around 2009 and 2010. Then, in 2013, a cow in Central Texas got a variant, alarming health workers. But looking back seven years later, that case appears to be an outlier.

Robinson has been involved with bait drops since they started in the 1990s, back when she was a regional veterinarian for what was then the Texas Department of Health. Asked if she found the work rewarding, she said: “Oh yeah.”

“It’s really a historical program. I think we’ve been extremely successful in being able to eliminate these two variants from the state,” she said. “It’s one of those programs that people maybe don’t hear about, but it’s been important in protecting the lives of a lot of Texans.”