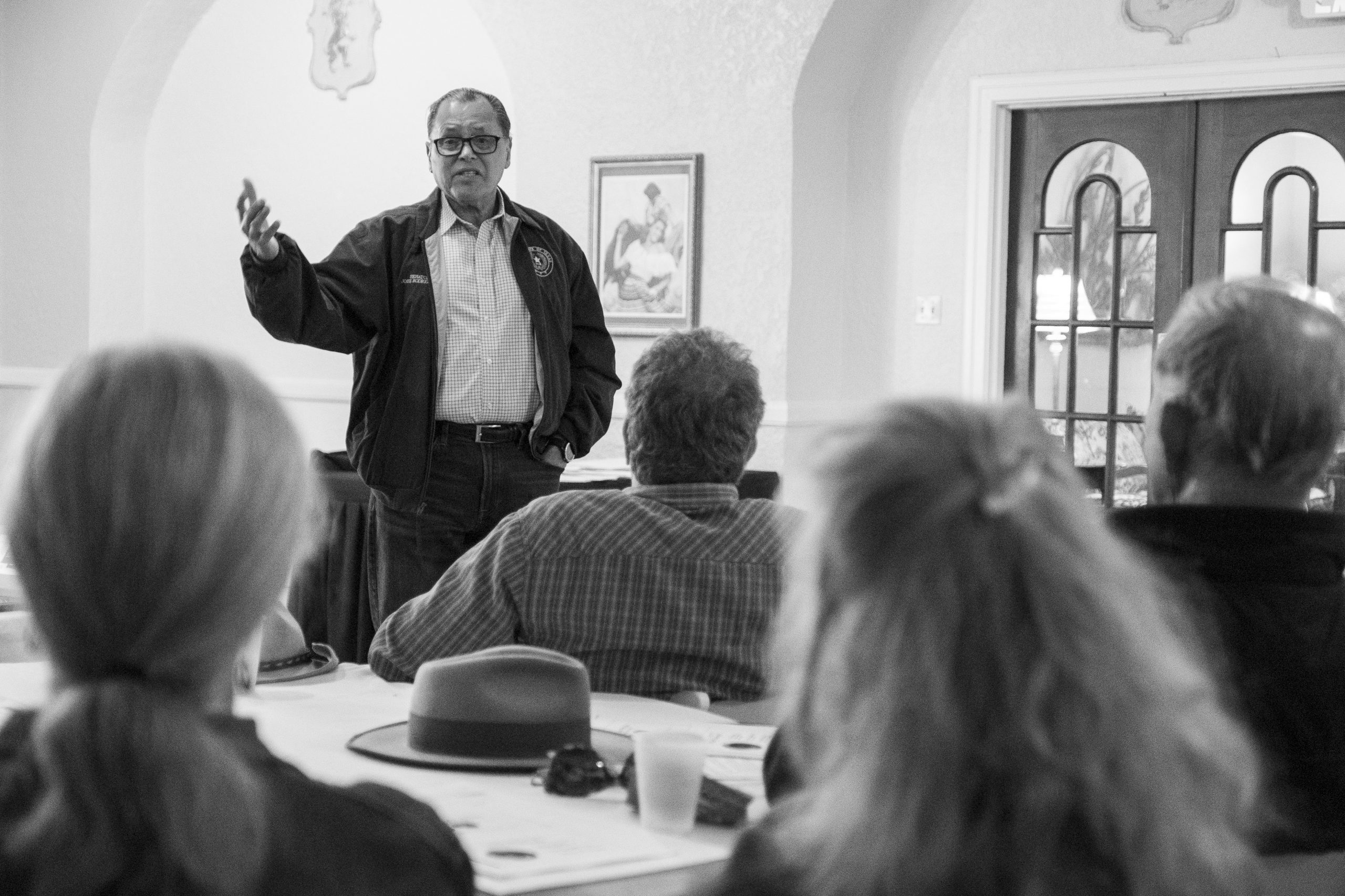 MARFA — State Senator José Rodríguez made stops in Marfa and Presidio last week in what will likely be some of his last town halls in the area.

That’s because Rodríguez, 71, announced in September that he would not be seeking re-election in 2020, as The Big Bend Sentinel previously reported. He’s served Senate District 29 since 2011 and has decades more of what he considers to be public service under his belt.

In his town halls last week, Rodríguez said he wants to spend more time traveling and being with his family. And he wants to take more hikes “before my knees go out completely,” he told a crowd of constituents in Marfa last week. “I want to be able to do a little travel I haven’t been able to do.”

“Thank you for the honor of privilege that you all gave me to represent you,” he said. “It’s been a tremendous honor for me.”

Rodríguez was scheduled to come to Marfa months ago, in August. But “unfortunately, because of the mass shooting that took place in El Paso, we had to cancel town halls,” he explained.

Governor Greg Abbott started organizing roundtables on gun violence that Rodríguez was a part of, and he said some of his constituents were busy grieving. “And that’s why we’re here,” he said of his delayed visit.

Much of Rodríguez’s town halls focused on his trademark issues, from better health care access to more resources for students – and especially ESL learners.

He spoke about the Texas Legislature’s efforts last year to overhaul school funding. Dipping into the state’s “rainy day fund” was not a long-term fix, he said.

“My argument with regards to [school] funding is, while we may have improved it, we still have a ways to go,” he said. “Particularly for our rural districts.”

“It’s unconscionable that Fort Davis had to give up its UIL programs because of the lack of funds,” he added. “But that’s the position public education has been in for quite some time now, under the state’s vision.”

On health care, Rodríguez spoke of his and other people’s efforts to help bring a “full-fledged medical center” to El Paso, which ultimately led to the city’s own Texas Tech University Health Sciences Center, established in 2013.

But Rodríguez stressed that Texas has more work to do when it comes to health care. He described the state’s decision not to expand Medicare as part of the Affordable Care Act as the “biggest disappointment” of his career. The state still has “the highest rates of uninsured people,” he said, “especially among our children.”

He also touched on mental health care — describing Texas as “near the bottom, or at the very bottom” when it comes to mental health outcomes.

Texas needs to do better, he said — and “not just because of the mass shootings that are taking place.” Mass shootings are “not all tied to mental health,” he said. “We don’t want to stigmatize mentally ill people as violent, because they’re not.”

Rodríguez then pivoted to gun violence. “We have an epidemic,” he said. He pinned the shootings in malls, churches and schools to the degradation of civic discourse in Texas and beyond. The senator was troubled that the El Paso shooter — who before killing 22 people published a manifesto complaining of an immigrant “invasion” — appeared to be acting “with racial animus.”

“I know there’s people in the room that feel strongly about the Second Amendment,” he said. “I do too, as a lawyer.”

But noting that gun killings happen every day, and not just in mass shootings, he stressed the United States needs to stop looking for convenient scapegoats for the carnage.

“Japan has a lot more people playing video games than we do,” he said. But their gun violence rates are far below the United States.

Rodríguez also gave a recap of the last legislative session, including “the good” (hemp production), “the bad” (more guns in schools) and “the ugly” (preventing Confederate monuments that are more than 40 years old from being removed).

“The legislative process isn’t just about passing bills,” Rodríguez said of the biannual Texas session. “A big part of it is also killing bills.”

“There are always people on the other side who want to kill my bills,” he added, laughing. “And believe me, some of my bills get killed.”

At the Hotel Paisano, Rodríguez took questions from the audience — though his detailed, hour-long presentation had answered most of them. And he reiterated that, even though he was retiring, he wouldn’t be leaving public life anytime soon.

“I used to enjoy rabbit hunting,” he concluded to laughter, “but that was a long time ago.”

Instead, he said, “I’m going to be raising hell in the community,” and being an “ankle-biter” for politicians, to make sure they are “doing the right thing.” Still, he did acknowledge he’d be taking some time off, whether it was to explore the Davis Mountains or attend a concert of David Beebe’s band.

“There will be plenty of things for me to do,” he said. “Don’t worry about it.”