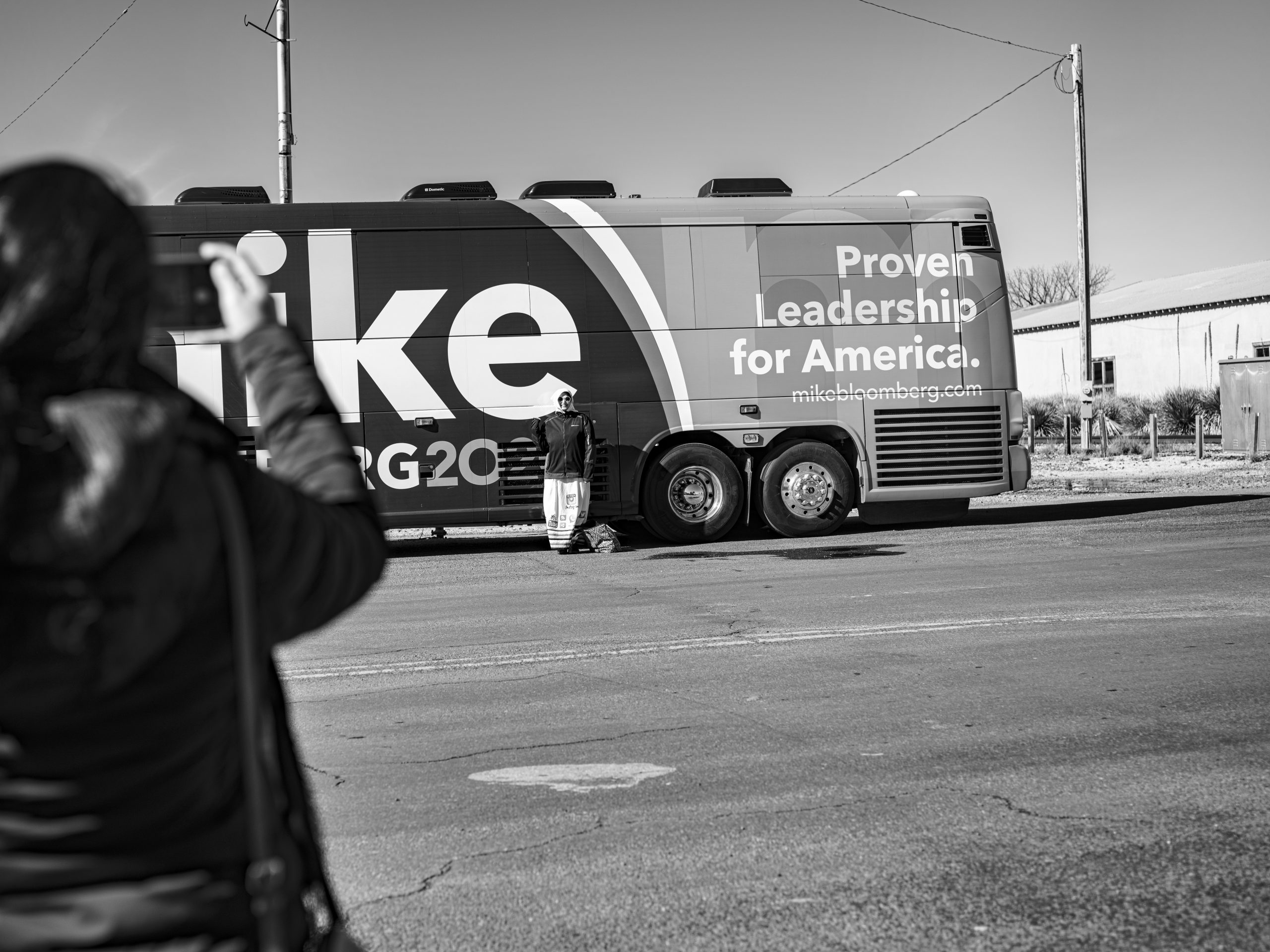 The “Get It Done Express” on Highland Street. Photo by Maisie Crow
Subscribe

UNITED STATES — While most of the Democratic presidential candidates were focused on the Iowa caucus last week, Mike Bloomberg’s campaign (but not Mike Bloomberg) was instead on a bus trip through the southwestern United States.

The “Get It Done Express” is promoting Bloomberg’s candidacy, along with his record as mayor of New York and what supporters say is an ability to defeat President Donald Trump in the 2020 elections. The tour also represents Bloomberg’s desire to focus on “Super Tuesday” states like California and Texas, which caucus later in the presidential elections but nonetheless have large populations, said spokeswoman Elizabeth Lewis, who was in West Texas for the tour.

The bus tour started last Monday in Compton, California. Then, on Thursday, it rolled into Marfa for an event at the Hotel Paisano with two Bloomberg supporters: César Blanco, a Democratic state representative who is currently running to be a state senator, and Peter Svarzbein, an El Paso city councilman.

There were also several other campaign surrogates, including Lewis, the spokeswoman.

A few locals came out to meet them and hear the campaign message and ask questions.

At the event, Blanco and Svarzbein touted what they said was Bloomberg’s get-it-done record. “I was pretty excited when he decided to come into the race,” Svarzbein told The Big Bend Sentinel. He said people had told him that Bloomberg was the “only Democrat” they had voted for. But Bloomberg also appeals to progressives, Svarzbein said.

Blanco agreed. Over a breakfast of burritos and coffee, he told voters he’d initially supported Beto O’Rourke’s candidacy but got behind Bloomberg after O’Rourke dropped out. He cited Bloomberg’s climate change plan, which calls for replacing coal plants with green energy and cutting carbon emissions by 50 percent by 2030. And like Svarzbein, he said Bloomberg wasn’t just about plans but could show his accomplishments as mayor of New York from 2002 to 2013.

“I don’t know about you, but I think having someone who can actually point to results is extremely important,” Blanco said.

Blanco also spoke about the El Paso shooting last August, in which a man posted an online diatribe complaining of an immigrant “invasion” before killing 22 people. “The shooting happened at the Walmart I shop at,” Blanco said. “It was very personal for me. I went to all the funerals.”

Citing Bloomberg’s work with Everytown for Gun Safety, a gun-reform group, Blanco stressed that Bloomberg was well positioned to carry out reform on a variety of issues. And he thought Bloomberg was best positioned to defeat Trump, who he said was creating inhumane conditions for migrants along the border.

Robert Halpern, former editor and publisher of The Big Bend Sentinel, asked what it would look like to have “two uber-wealthy multimillionaires” running against each other for president. “What does that say for our democracy?” he said. “What does that say about co-opting our government?”

Blanco emphasized a point made by other Bloomberg supporters: that Mike’s record of putting money into causes shows his progressive credentials and that his wealth means he’s “not beholden to anyone.” Blanco also thought it was “okay to celebrate success.”