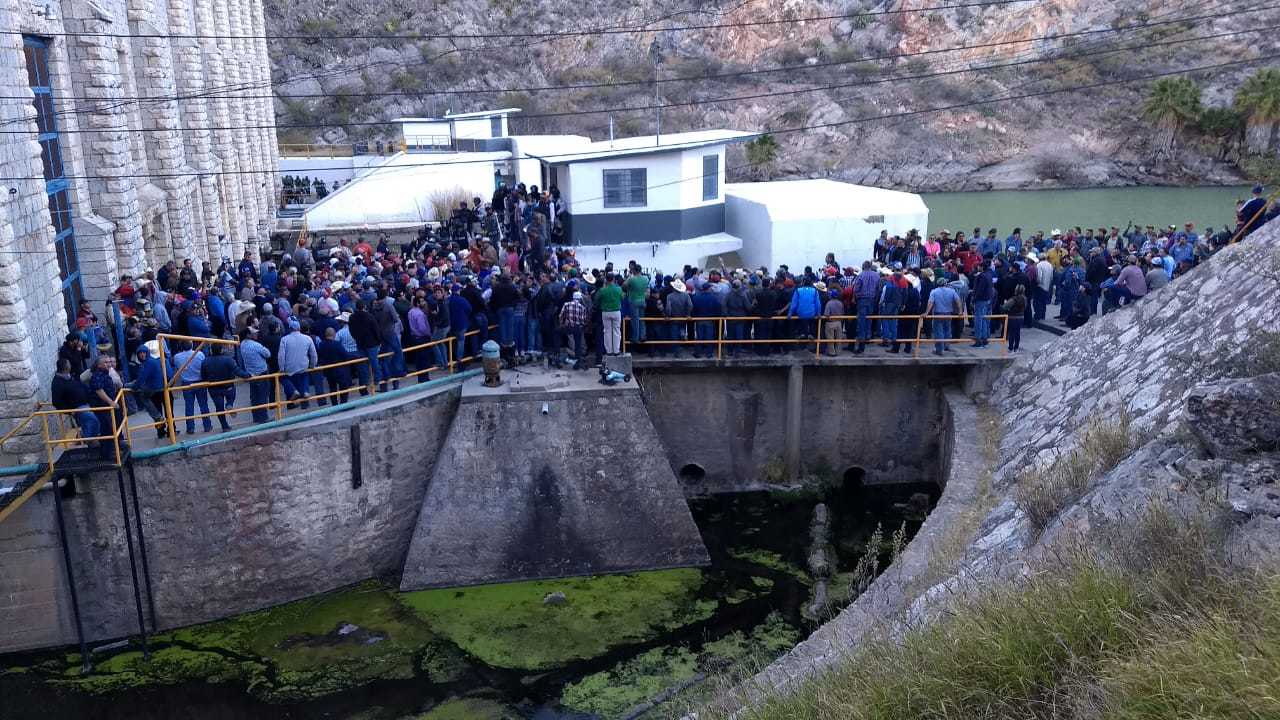 CHIHUAHUA — Hundreds of farmers in the bordering Mexican state of Chihuahua attempted to commandeer a federal dam on Tuesday, February 4, breaking through the Mexican National Guard’s line of defense and committing to occupy the dam until the Mexican government promised not to divert any water to the United States. The guard removed protesters from the federal property without major incident on Wednesday.

The temporarily occupied Boquilla dam, south of Chihuahua City near Camargo, holds water from the Rio Conchos, a major contributor to the Rio Grande’s flow in the Big Bend region and further east. The contentious diversions of water from Mexico to the United States are part of a long standing bilateral water treaty between the border countries. Since 1944, near California and Arizona, the United States has diverted water from the Colorado River to Mexico. Downstream, Mexico gives the Rio Grande a boost by sending water into the Big Bend area.

According to Big Bend Conservation Alliance Executive Director James “J.D.” Newsom, there is a lot of debate surrounding how those waters are released. “If there’s periods of dryness or drought, Mexico can rack up a sizable debt,” he said. That’s because the water payments from Mexico operate on a five year cycle, giving them time to allocate water at different levels during different seasons. During a hurricane season, for example, Mexico might release a lot of water all at once, fulfilling part of the treaty mandate very quickly, though not necessarily helping the U.S. much, since the flow is overabundant.

Mexico is obligated to deliver 1.75 million acre-feet of Rio Grande water to the U.S. every five years, while the U.S. delivers 1.5 million acre-feet of Colorado River water to Mexico each year. The International Boundary and Water Commission reported that 12 percent of five-year cycles have ended in debt since the treaty began in 1944, while the United States has always delivered the required water payments.

Locally, these flows in the Rio Grande help ecosystems, tourism and recreation in the Big Bend, funneling dollars into the local economy. They then fill Lake Amistad, where the angling and tourism industry thrive on the water. Further downstream, the Rio Grande Valley’s farming operations draw on the flows to maintain their crops. Newsom said, “When Mexico doesn’t release water, then our farmers are impacted in a major way, because they’re not able to access water they need to grow crops. That’s the worry, that’s where it starts affecting us.”

Sally E. Spener, U.S. secretary (foreign affairs officer) for the U.S. section of the IBWC said that with seasonally-adjusted average deliveries being considered, “Mexico has delivered 87% of what would be expected if deliveries were made on a consistent basis throughout the five years.”

There are exceptions in the treaty for contingencies like extraordinary drought, but according to Spener, the IBWC understands there is “sufficient water available in Mexico to fulfill deliveries to Mexican users and meet treaty obligations this year.”

This five-year cycle of water payment will come to an end on October 24, 2020. With Mexico delivering behind the average pace of payment and the La Boquilla dam currently sitting below its capacity, farmers stepped in to prevent water diversion to the United States. “The Mexican farmers feel they should have first rights to those waters,” Newsom explained. “And that’s where the tension comes from.”

Responding to the protests, Chihuahuan Governor Javier Corral Jurado said Mexican farmers’ needs should come first, suggesting that farmers use the water now and then hope precipitation later this year could be used to make water payments.

However, Mexican President Andrés Manuel López Obrador reprimanded farmers after the incident, using a Mexican idiom, “What flavor do you want your ice cream?” to suggest protesters were asking for too much. The Mexican government intends to fulfill its obligations this year, according to the IBWC.

From Newsom’s perspective, the Mexican president’s response is “great for us, because the politics around the Mexican water releases have been contentious over the years, and Mexican administrations have not always been so favorable to fulfilling those treaty obligations.”

“We do not want an international conflict,” López Obrador told Mexican press after the incident at the dam. “Treaties have to be lived up to. If we have signed a treaty, we have to comply with it.”

The stakes are higher for López Obrador to ensure the debt is fulfilled this time around. In 2015, Mexico ended their five-year cycle in debt, so under existing agreements the country is now required to meet the treaty mandates this October.

Multiple attempts were made to contact the national and local Chihuahuan offices of the National Water Commission (CONAGUA) for comment, but they were not reached before press time. “#Conagua reiterates its willingness to find consensual solutions for the fulfillment of our international commitments, which not only meet technical factors, but, above all, that guarantee the safety of the entire population,” they posted last Thursday on their official Facebook page.

The Mexican water commission set up a working meeting to seek alternative options to still comply with the treaty, while satisfying the demands of local farmers. The stakeholders will convene the night of Wednesday, February 12, after press time.