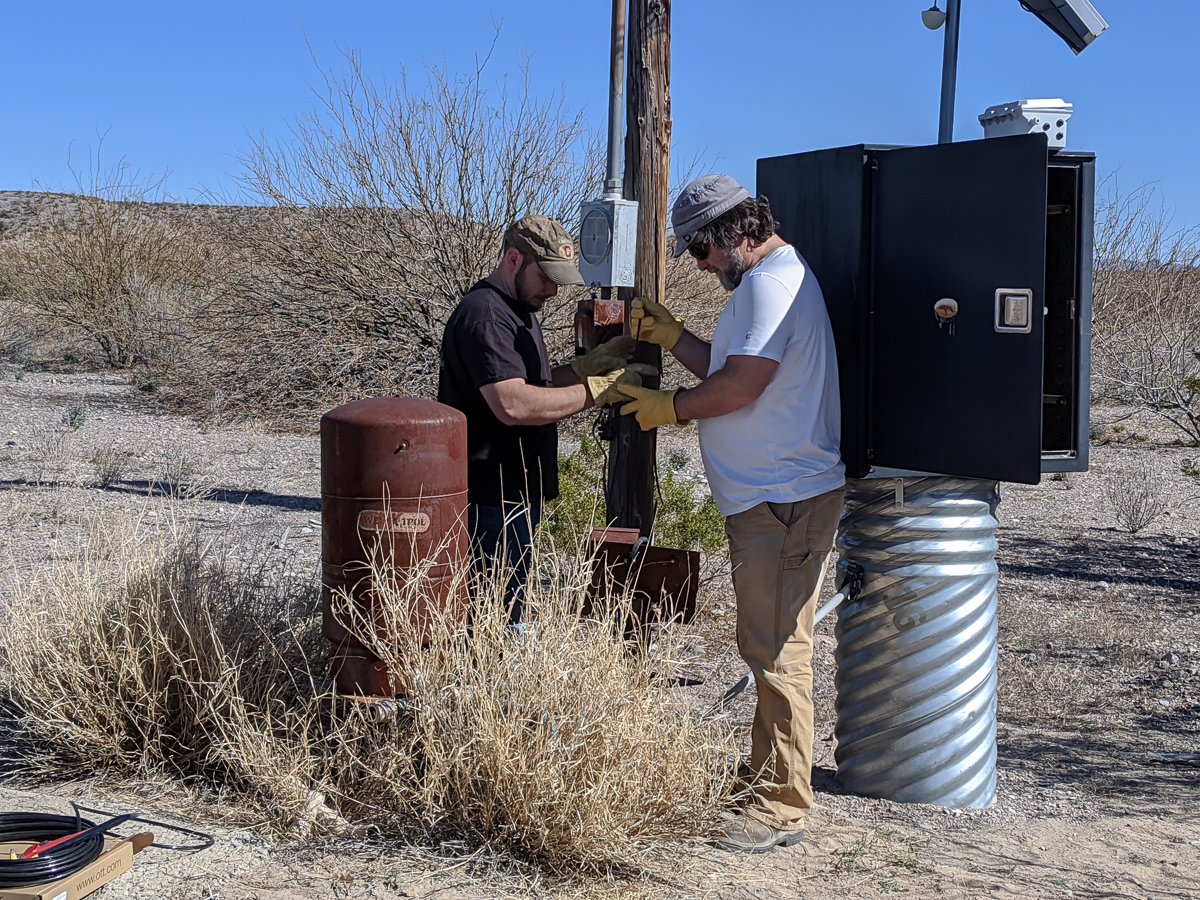 Technicians work on installing the data logger on the Loma Paloma well in the outskirts of Presidio. Photo by Carolyn Macartney
Subscribe

PRESIDIO COUNTY — With the sun rising on Friday, a group from the Presidio County Underground Water Conservation District turns off U.S. Route 90 for a dirt road into the sprawling MacGuire Ranch. The group drives along the fenceline for a minute or so until they reach the point they’re looking for: an unassuming piece of pipe where years ago a highway crew drilled a water well into the Igneous Aquifer below.

The water officials get to work, calibrating the well’s depth with an electric-line static checker (an enormous spool) and affixing a solar panel and battery to a nearby pole. A couple hours later, they’re done, and Presidio County has a new water monitor.

The Presidio County Underground Water Conservation District has been on a push lately to better record water levels in Presidio County. Doing so is the “primary job” of the water district, says General Manager Carolyn Macartney, as well as “how you keep track of your aquifers.”

Last year the water district put out a call, asking anyone with an abandoned or unused water well to consider allowing the water district to access it for monitoring. And they received a handful of volunteers, including MacGuire Ranch, where the installation happened last week. (Water officials are also still looking for new volunteers, who can reach out to the district by email at [email protected] or over the phone 432-295-2568.)

After months of finding volunteers, building interest and securing grant funding, PCUWCD last weekend started doing installs. The district had previously looked at an unused city well in Marfa, where they found a monitor already installed. It turned out to belong to Sul Ross State University, which agreed to share its archival data with the district — though it’s unclear if the monitor is still active and pulling new data.

PCUWCD can’t install a monitor at the Marfa city well due to an old pump and cables in the well. But they say they’re still “very interested” in doing so.

It would be a win-win, Macartney says, because cities are required to plug unused wells with a notable exception: if the well is being used for research purposes. “It’d save the city a bunch of money,” she says.

After completing the installation at the MacGuire Ranch, the water district also visited the outskirts of Presidio, where it installed a monitor at a well in the Loma Paloma RV park. That well is owned by the Bishop family, who had previously allowed Sul Ross to set up a monitor. PCUWCD also tried to install one at the Judd Las Casas property in remote Presidio County, but it didn’t work out: the well was too deep. Macartney said she was nonetheless grateful to the Judd Foundation for offering to help.

Macartney says PCUWCD hopes to install two or three monitors each year. With little rainfall but plenty of tiny pockets of groundwater known as “bolsones,” groundwater issues have always been important in the Chihuahuan Desert region of Texas. But a number of developments, from climate change to increased commercial activity, have put water on the forefront of locals’ minds. Last year, as The Big Bend Sentinel previously reported, an Australian-based oil company started fracking in northwest Presidio County, prompting fresh worries about water usage.

As for Macartney, she says that monitoring water wells is always important. “Without monitoring, you have no idea what’s going on,” she said of local aquifers. “The job of the groundwater conservation district is to project the health of aquifers and all who use them. That makes sure everyone gets their fair share without overtaxing the aquifer.”