Hannah Marshall, an archivist at the Chinati Foundation and new Marfa Museum board member, looks at a photograph in the Frank Duncan archives. Marshall is volunteering her time alongside Judd Foundation Archivist Caitlin Murray and Sul Ross’ Systems and Discovery Services employee Mike Fernandez to create a needs assessment for the museum collection. Photos by Maisie Crow
Subscribe

PRESIDIO COUNTY — The Marfa and Presidio County Museum has come a long way since its 1966 conception by Marfa High School student and Junior Historian President Eddie Hernandez. Once housed in the high school’s hallway, the museum has grown as locals have donated photographs, artifacts and ephemera of life in the Big Bend. And since last fall, some locals have stepped in, offering their expertise to carry the museum into the future.

The museum’s historic adobe home on Highway 90 has seen better days, and the ever-growing collection of local history is now being seen as a potential resource for historians if it can be strategically catalogued and preserved.

When they moved to its current location, the museum board contracted with the City of Marfa (the owners of the historic Humphris-Humphreys home) to pay $1 per year in rent for the Highway 90 property. As the museum moved into its new home, it also assumed the responsibility of building maintenance in the lease agreement.

Since moving the museum into the Humphris-Humphreys house in 1996, water damage and faulty adobe restoration practices sank the east wall into the ground, dragging the interior’s floors into a deep slope and sending the window frames askew in three rooms. The ceiling had slowly settled to rest on the spines of books housed in a room displaying the history of medicine in Marfa, until visitors were entirely blocked from entering the room.

The city hired local contractor Joey Benton to stabilize the adobe east wall, and today, visitors can access the previously closed off exhibit. There’s still restoration and replastering to be done, but efforts funded by a grant from the city are fortifying the building for museum-goers to continue learning about regional history. 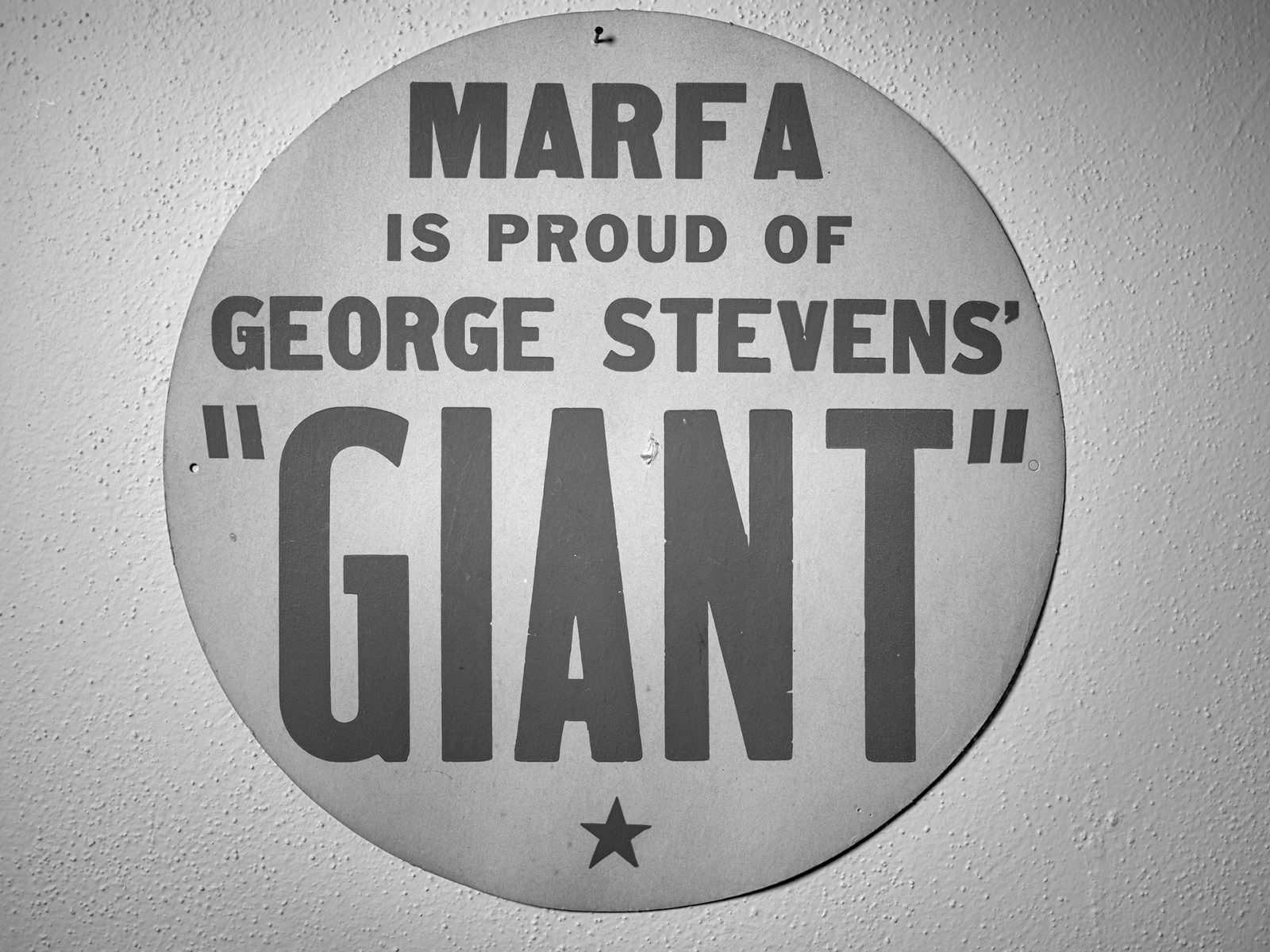 The museum holds collector’s items like the “Giant” poster that was made to welcome the production of “Giant” to Marfa.

The museum exists to preserve the history of the Big Bend region, building its collection largely off of donated items from local families. Artifacts fill the house’s twelve rooms. In one, the Shafter mining history is told. Another hosts vintage switch boards, telephones and typewriters. Other rooms hold ephemeral relics of turn-of-the-century domestic life, a history of border patrol, antique Marfa fashion and prehistoric tools from the region.

A letter pinned in the doorway of one room tells the story of a local African American shoe shiner who hated his job, but loved Marfa. The man loved the local sports teams so much, he was eventually buried in his Shorthorns letterman jacket.

Martha Stafford, a museum employee, says there’s something to interest everyone at the museum. Museum board member Jennifer Lees described Stafford as a fountain of knowledge. When guiding tours, she walks through each room of the house, adding descriptive color and detail to any artifact a visitor might ask about.

When she’s not giving tours, Stafford peruses uncataloged artifacts in the archive, piecing together clues to reveal local histories that might otherwise be lost to time. While working away on the computer in the back office, she fields curious calls from far and wide about Marfa, Presidio County, family trees, historic documents and photos.

Stafford is also tasked with unearthing, researching and archiving items that are stored in the house’s back room and a backyard storage building. She pulls photographs, papers and artifacts from piles, cabinets and boxes, which overflow in insurmountable abundance. 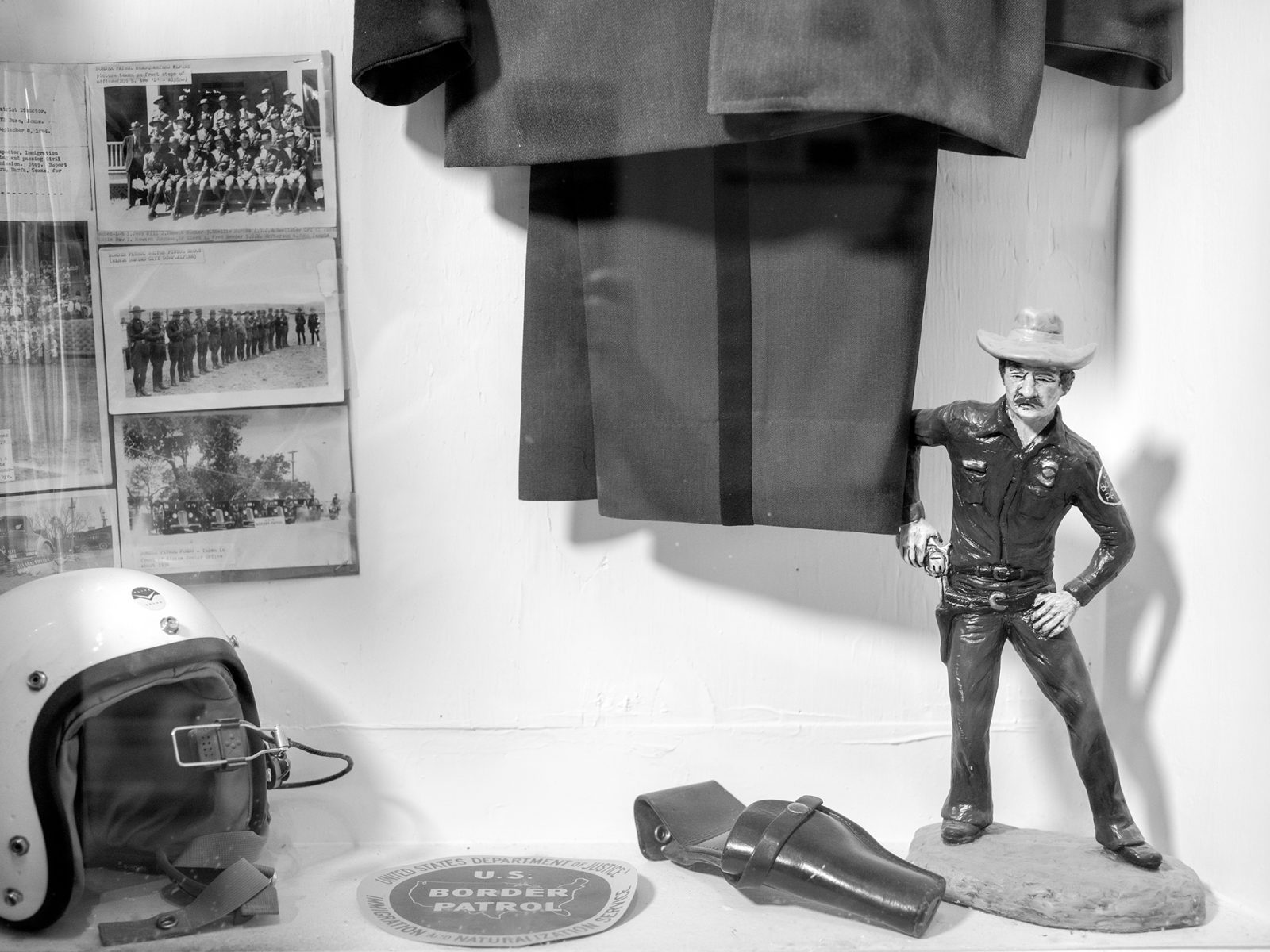 An exhibit at the museum provides visitors with the history of the United States Border Patrol.

In the backyard storage room, the windows aren’t weatherproofed and the storage isn’t climate controlled. Unexplored artifacts in cardboard boxes are vulnerable to hungry insects. Last fall, Stafford took it upon herself to pull all of the paper archives out of the room for safe-keeping from encroaching mold and mildew.

Returning to the archives in the back room of the house on a Saturday afternoon last fall, Stafford shows the $1,000-a-piece fireproof cabinets, which hold historic photos by Frank Duncan, an early 1900s photographer who captured the Big Bend region, often in sweeping panoramas. Prints of his work are on display throughout the museum, showcasing some of the still-pristine vistas the Big Bend is known for, and documenting the Rio Grande’s broad flow before invasive plants choked it into today’s narrowing passages.

Across the room, the Nancy Keith archives, which tell the story of Marfa in the late 1900s from a local female photographer’s perspective, still await their transfer to fireproof cabinets. Stafford says the museum can’t currently afford to properly store them.

That afternoon, Chinati Foundation Archivist Hannah Marshall arrived for her first look at the museum’s photography collections. As she opened the cabinets, Marshall pinpointed rust and mineral deposits that dotted the metal canisters that house dozens of rolls of film negatives. She says those chemical reactions threaten the stability of the film and ought to be replaced, another expense for the museum.

Marshall arrived at the request of Lees, who hoped to assemble a comprehensive needs assessment of the museum’s collection. Marshall, Judd Foundation Archivist Caitlin Murray and Sul Ross’ Systems and Discovery Services employee Mike Fernandez have offered to volunteer their time on the project, a crucial first step. 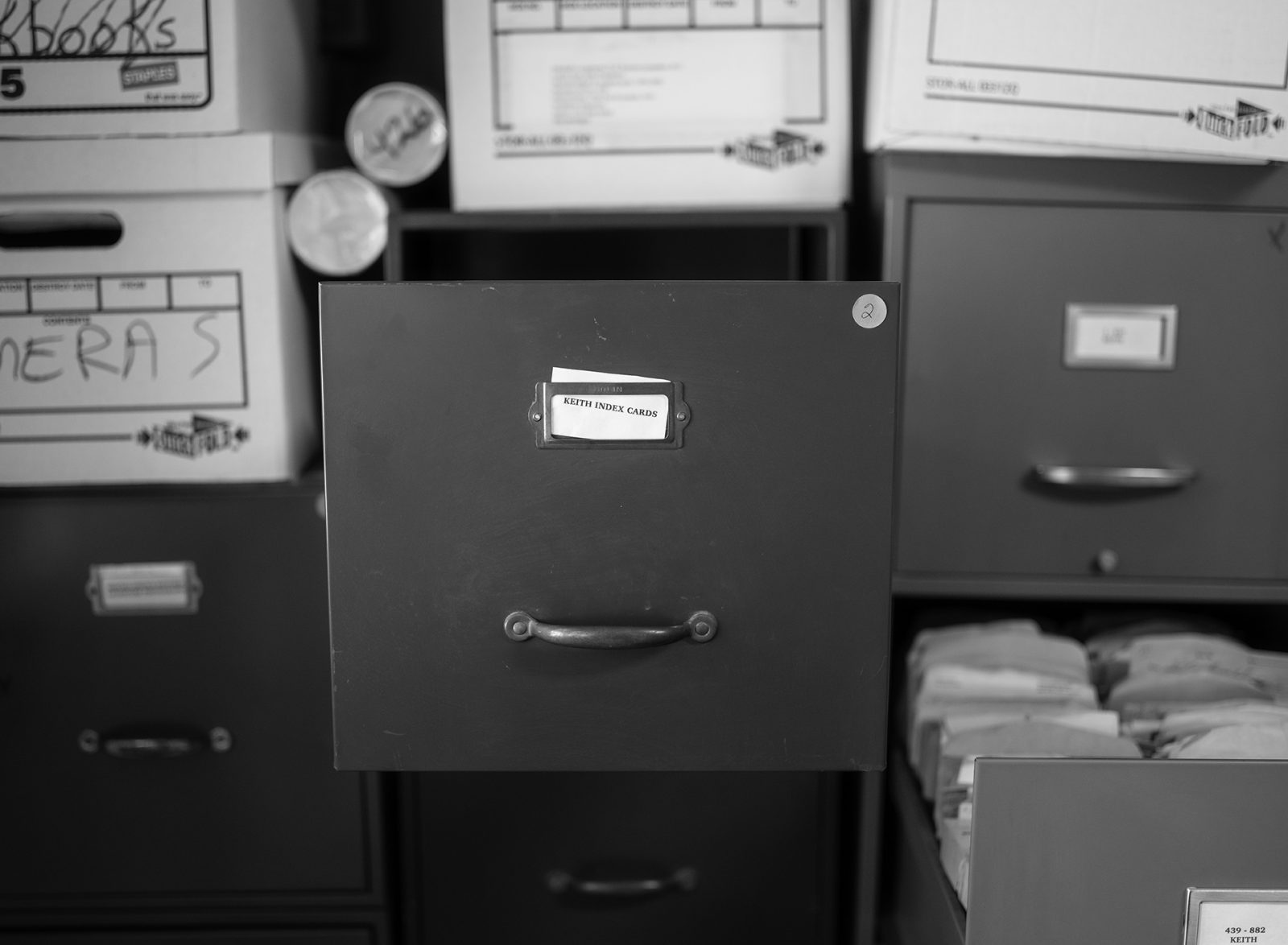 A set of filing cabinets holds the Nancy Keith archives, telling the story of Marfa in the late 1900s from a local female photographer’s perspective.

The trio gathered in the museum’s back office (and home of some of the museum’s archives) to dig into the museum history and get a firm idea of how the archive formed. They will interview board members and staff, assess the massive amount of volunteer work put into the archive thus far and ultimately provide a report that will reassure granters that “objective third parties have come in to give suggestions to improve stewardship of the collection.”

The board of five is hoping to expand the reach of the museum, drawing in locals and tourists, and find new funding sources to support the collection. Board member Mary Williams pointed out that the collection underrepresents Shafter and Presidio currently. The archivists noted that an assessment could reveal asymmetry in the museum’s coverage, and the board could seek donations of material from other areas as a result.

Lees says the museum and its archives have the potential to become a resource for research statewide and on a national level, beyond serving the local community.

For many years, the museum has financially relied on the Marfa Museum Thrift Store to support its operations. Its modest income sustains the museum from Thursday through Saturday, and recent contributions from the city of Marfa’s hotel occupancy tax fund have let them open the doors Monday, Tuesday and Wednesday too.

Benton, the contractor who executed the wall’s stabilization, said the highest priority was the initial repair, which would replace the failed bricks, remove the concrete plaster and let the adobes breathe again. After that, a larger assessment is needed to determine the entire scope of a full building restoration. 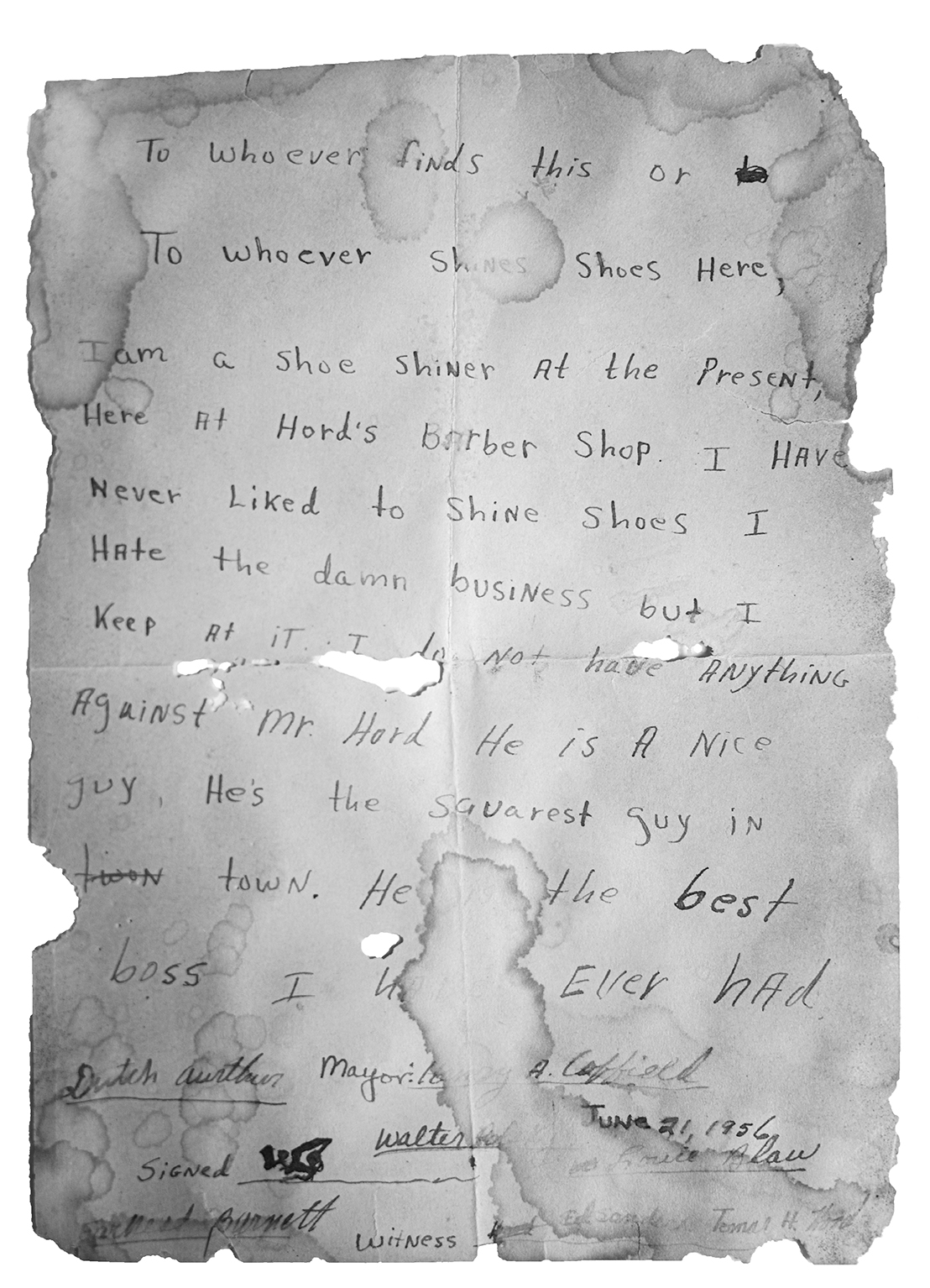 Benton hopes opening the museum’s walls will also open a conversation about a different part of Marfa’s history. “I think it’s a place to talk about some of the vernacular qualities of Marfa and really embrace earthen building, how it came about and what that culture was like,” Benton said.

The help of local archivists to make a needs assessment will fortify the museum’s grant applications too. Under the leadership of President Maggie Marquez, the board is hoping to double its size from five members to 10 in order to expand their talents, resources and reach. Marshall herself stepped up to become the newest board member, bringing her archival insights to the museum conversation.

Speaking about the archive and the building’s infrastructure problems, Lees explained, “We understand these are long projects that will cost a lot of money, so we have every intention of becoming self-sufficient.” Museum efforts to repair the building, catalog and preserve the archive, and find funds to keep the museum updated are all integral to moving the Marfa and Presidio County Museum into the new decade.

The Marfa Museum recently got its first website (https://marfamuseum.org/) and launched an Instagram (@marfamuseum) that shares images and descriptions from Marfa history. 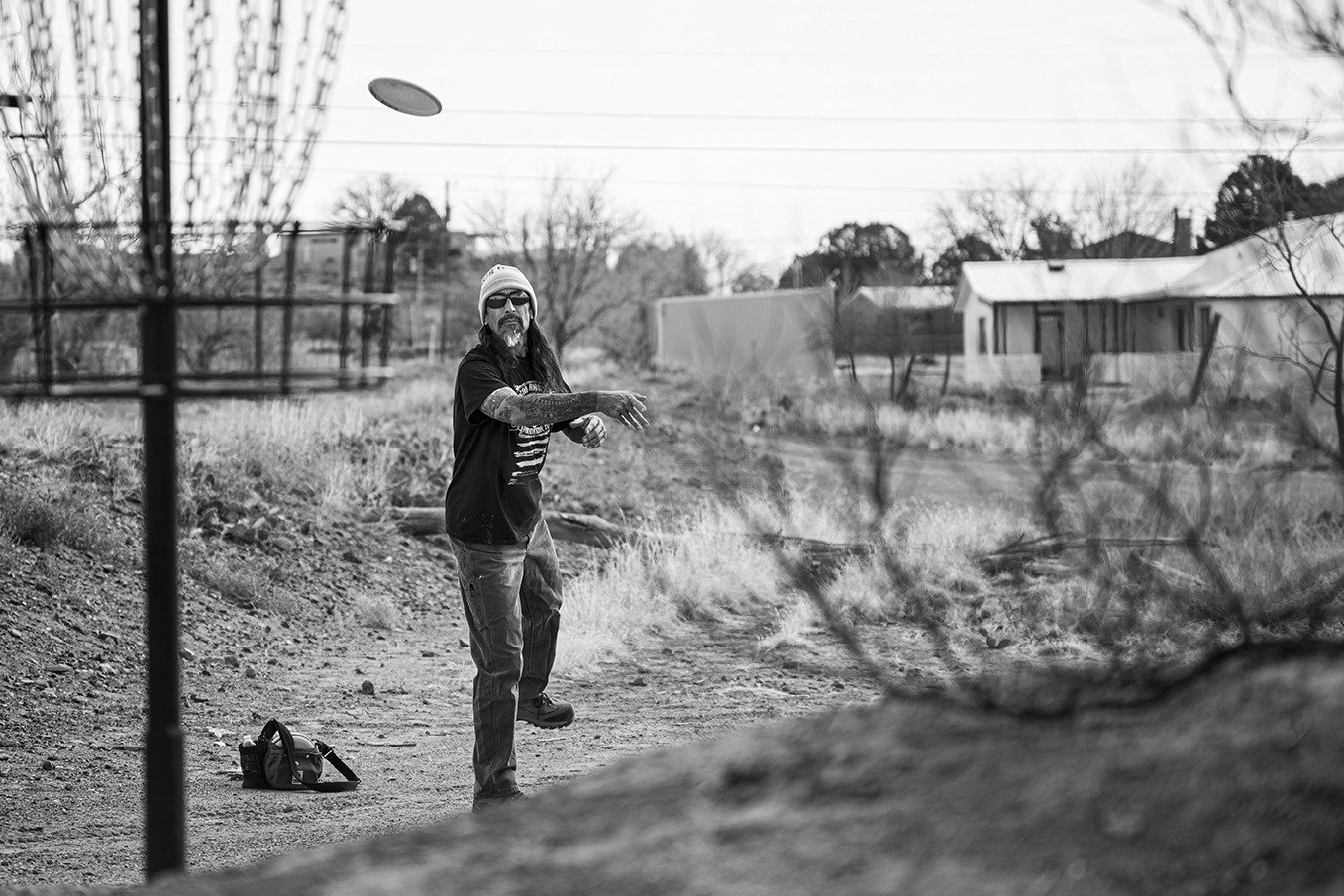