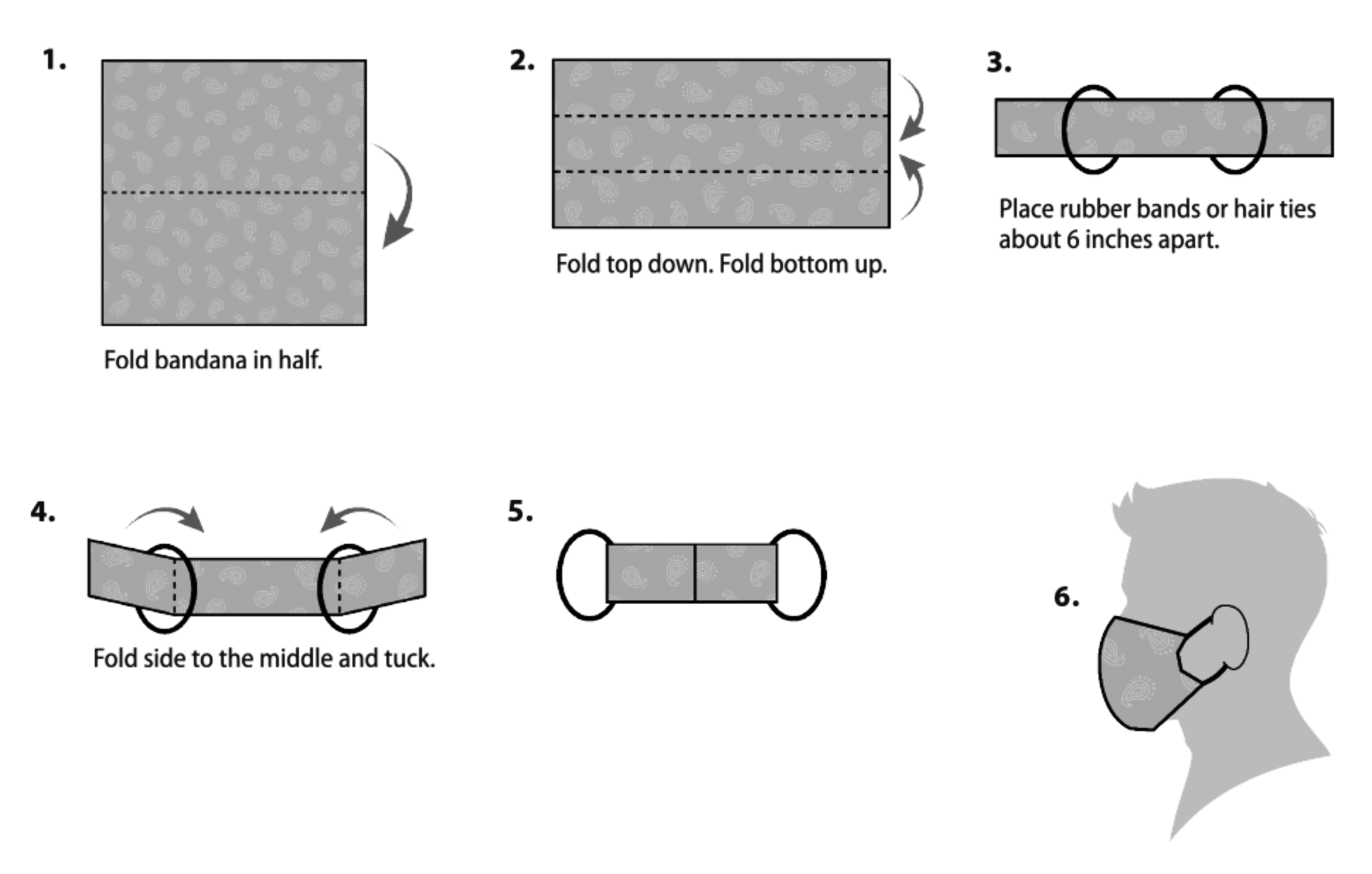 Graphics from the Centers for Disease Control and Prevention demonstrate how to make cloth face-coverings out of common household items, including a bandanna (above).
Subscribe

TRI-COUNTY — Can wearing a face-covering help protect people from catching or spreading the coronavirus? And what about gloves?

After months of confusing or contradictory guidance from the feds on these issues, local health and emergency officials in the tri-county region are starting to develop their own advice.

The short version: emergency-management officials in Presidio and Brewster counties  recommend face coverings in public. Wearing one can protect the wearer but — more importantly — also helps slow the spread of the virus, by preventing asymptomatic carriers of coronavirus from transmitting the disease to others.

Gloves, on the other hand, do little to help stop the spread and could even hurt, by making people lax about handwashing and other protective measures.

“They give us a false sense of hope,” said Stephanie Elmore, the emergency management coordinator for Brewster County.

How to make a cloth face-covering using a T-Shirt. Graphic courtesy of the Centers for Disease Control and Prevention.

That’s clearer advice than from the feds, which for months have waffled on whether Americans should bother with personal protective equipment.

As recently as March, the Centers for Disease Control and Prevention were not recommending masks for non-frontline workers, apparently fearing that people might hoard them and cause a shortage for doctors and nurses — and also because coronavirus was not yet widespread in the United States.

Earlier this month, the agency changed course. It now recommends that everyone wear face coverings in public, “especially in areas of significant community-based transmission.”

The agency has also shared guidance on how to make cloth masks at home, including from T-Shirts and bandanas. People can make masks from T-Shirts by cutting off the bottom eight or so inches of a shirt, and then cutting out part of the middle of the shirt to create two facestrings on either side.

So far, the City of Presidio has gone farther than other tri-county governments in advocating for personal protective equipment for residents. When its city council renewed Presidio’s emergency orders earlier this month, they included guidance that people “should” wear face coverings when out in public.

Some Presidio residents complained that they didn’t know how or where to buy masks — and Presidio Mayor John Ferugson stressed on social media that the guidance was just that.

“It is absolutely not required by law,” he told residents in one post. “But do the right thing.”

Malynda Richardson, the EMS director for Presidio city, came out in favor of face coverings during the Presidio emergency meeting.

In an interview Monday, Richardson said she does think gloves could be a good idea for some workers — including grocery workers who regularly handled cash.

“Money is made of cloth fibers, and it holds onto germs,” she said. “It’s one of the dirtiest things you can possibly touch.”

But for most residents, she reiterated that gloves could make people feel protected without offering much protection. She gave the example of someone using one pair of gloves to touch multiple products at a grocery store, or — even worse — to touch their face.

Making matters worse, she said, most non-healthcare workers don’t know how to properly remove gloves, which involves peeling them off slowly and then stuffing them together to avoid touching the exterior surface of the gloves with bare hands.

“It’s sort of an instinctive thing: you put on gloves, and you feel safe,” Richardson said. But the reality is anything but.

Such measures were particularly important, Richardson said, because up to 40 percent of people with coronavirus don’t experience symptoms — and because Presidio has a large population of elderly and vulnerable people.

“I transmit it to a 17-year-old kid, and then they take it home to their grandparents,” she said, speaking hypothetically. “That community spread is what you want to stop.”

Across the region, health and emergency officials said they agreed with Richardson’s views on masks and gloves.

“I think masks are a good idea,” said Stephanie Elmore, the Brewster emergency management coordinator. “You’re keeping your germs to yourself.”

Gloves, on the other hand, give a “false sense of hope” and could potentially “contaminate everything that you touch.”

“Instead of using gloves, just wash your hands,” Elmore said.

Gary Mitschke, the emergency management coordinator for Presidio County, agreed on both fronts. Wearing face-coverings in public is “probably” a good idea, he said — though he stressed that keeping distance from people is the “better way to go.”

Wearing gloves, on the other hand, “could actually be more a detriment,” he said. Instead, he stressed that people should be vigilant about washing their hands.

While officials are in lockstep on guidance on masks and gloves, there was more disagreement on another question: could the CDC have done more — and done more sooner — to help circulate safety guidance to Americans?

“Maybe,” said Richardson, the EMS director in Presidio city. She thinks the agency was “trying to make the best call given the circumstances” and wanted to prevent people from hoarding N95 and surgical masks. But on the other hand, she thinks the resulting confusion has left some Presidio residents still uncertain about how to best protect themselves and others.

Mitschke said federal health authorities “reacted fairly quickly” when faced with a “major learning curve.” As the situation on the ground changed and the risk of coronavirus increased in the United States, the CDC updated their guidance, he said.

Mitschke, who also serves as chief of the Marfa Volunteer Fire Department, compared the coronavirus pandemic to a wildfire.

“You don’t know what you have until you get in there and size it up,” he said. “This virus is a whole different animal.”