Marfa, Presidio, Alpine and Terlingua will be part of statewide testing blitz 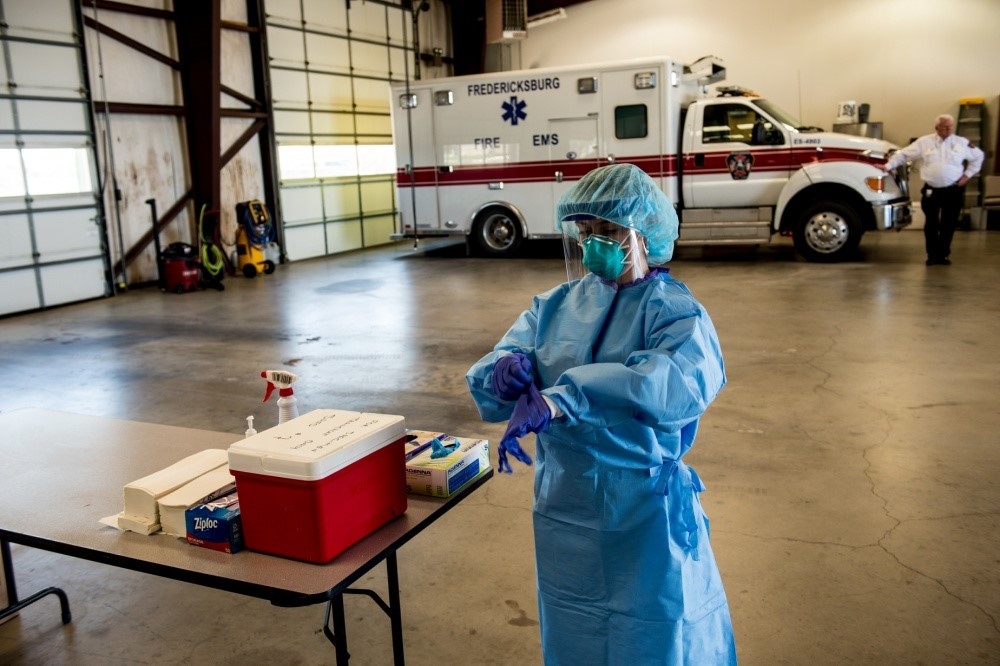 Governor Greg Abbott announced that the Texas National Guard will deploy 25 mobile testing teams this week to operate free drive-through coronavirus testing. They will visit Marfa and Alpine on Saturday, April 25 and Presidio and Terlingua on Sunday, April 26. Photo courtesy of the Office of the Governor
Subscribe

FAR WEST TEXAS — Governor Greg Abbott’s office informed the county that coronavirus testing is on its way, and will be administered by deployed Texas National Guardsmen this weekend, in a late night message to Presidio County Judge Cinderela Guevara on Tuesday. Testing will be available for Alpine and Marfa on Saturday, April 25 and for Presidio and Terlingua on Sunday, April 26.

In a press release on Monday, the state announced that the Texas National Guard will send 1,200 members, divided into 25 COVID-19 “mobile testing teams” and each deployed to a different part of the state. A full list of testing sites across the state has not been made available, but regionally, testing will make its way through West Texas beginning Friday in Fort Hancock and Van Horn, and eventually reaching Pecos, Ft. Stockton and further north towards the Permian Basin by the following weekend.

The first announced places for testing are Fredericksburg’s Gillespie County, which has one recovered case, and Floresville’s Wilson County, which has had 22 confirmed cases. The governor’s office did not return a request for comment regarding how cities were chosen for testing, but his statement said the teams “will cover various regions across Texas to ensure that the testing regimen will be expanded across the entire state.”

The governor said when all teams are fully deployed, the state will be capable of collectively testing 3,500 people per day. Each team will have 11 medical professionals and support staff, as well as 34 soldiers.

Currently, the Texas National Guard has the capacity to test up to 150 people per day at each mobile testing team location. But in Marfa, there may only be anywhere between 60 and 80 tests available, Guevara was told. That number should be similar across the four Big Bend cities receiving testing. Currently, the Big Bend Regional Medical Center has tested 40 individuals, all returning negative results.

“Now, more than ever, it will be important for all of us to work together and we must think about people in our community who may not be able to get to the testing sites,” Guevara wrote in a Tuesday night email to local officials. “I will contact [the] Governor’s office to inform them of needing to go out to our colonias, Candelaria, Riudosa, Redford, and Shafter.”

“I just have mixed feelings about it,” Guevara told The Big Bend Sentinel on Wednesday morning. “Since there isn’t readily available testing until you have symptoms, it may be good.” The state has not said that patients must show symptoms to receive testing at the drive-through.

Texas currently ranks 48th in testing per capita, having tested just over 200,000 of the state’s nearly 29 million residents. Even with a low percentage of testing, Texas ranks in the top ten states for total number of coronavirus cases.

“The State of Texas continues to expand our COVID-19 testing capacities and ensure that communities across the Lone Star State have access to the resources they need,” said Governor Abbott. “I am grateful for the dedication of our Guardsmen as they continue to serve their fellow Texans throughout the COVID-19 response.”

The governor has already announced plans to lift restrictions across the state, and his “Strike Force to Open Texas” will “safely and strategically restart and revitalize all aspects of the Lone Star State — work, school, entertainment, and culture,” according to the state website.

Abbott last week announced initial “opening” plans, including “retail-to-go,” a format that mimics restaurants current to-go-only operations. He also lifted restrictions on nonessential medical procedures, as long as hospitals still reserve 25 percent of their bedspace for coronavirus patients. State parks are also allowed to reopen for day use, though many in the Big Bend region have refrained thus far.

Public and private schools and higher education institutions will remain closed through the end of the academic year, according to the governor’s statement.

Abbott said he will make additional announcements regarding coronavirus restrictions on April 27, adding that the stay-at-home order, which expires on April 30, may be eliminated.

“I cannot stress enough that testing will not make us safer,” Guevara wrote to officials. “We must not allow ourselves or people in our community to cultivate a false sense of security. All of us together have been able to corral the virus away from us thus far by the extreme measures of closing businesses, churches, hotels, etc.”

“As we move towards eventually opening up the local economy, we should in no way relax our efforts to reduce interaction with people and social distancing should be practiced until we have a vaccine,” she wrote.

Echoing local coronavirus task force member and doctor Ekta Escovar, Guevara added, “As the urban areas see their areas with flattened curves after their peaks have come and gone, it could mean that our rural areas will be hit later and harder IF we are not careful and [if we] relax our efforts.”

“May we be strong together and persevere in this difficult time. If we stick together by staying apart, we can be safe,” said Guevara. Details on testing locations, times and making appointments will be available at bigbendsentinel.com as soon as they are announced.