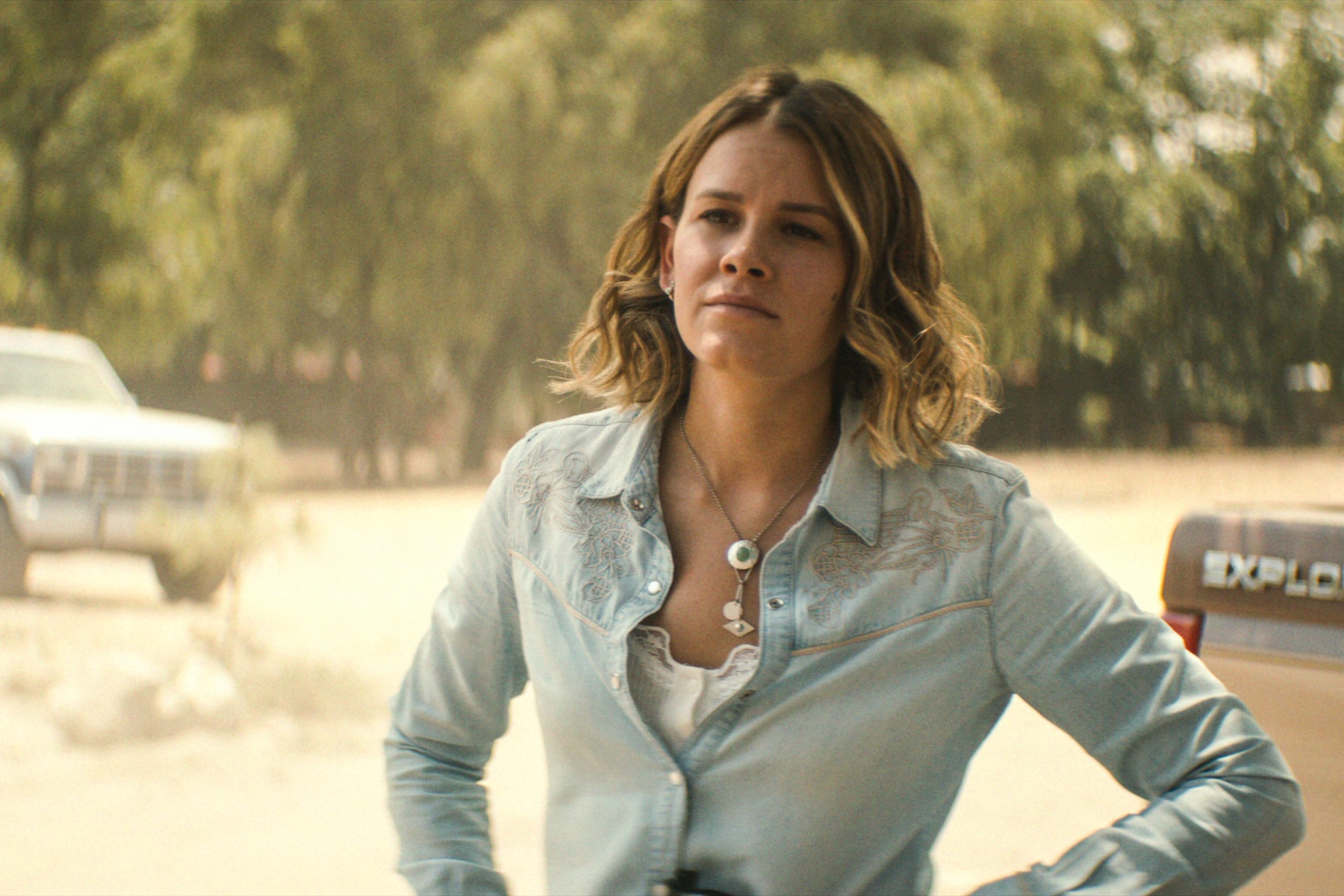 TERLINGUA — Mimi Webb Miller is riding on horseback around her family’s Big Bend-area ranch when a group of unfamiliar Mexican men pull up at her house. They’re friends and business associates of Miller’s boyfriend, drug kingpin Pablo Acosta Villarreal, also known as “The Ojinaga Fox.”

Miller doesn’t know that yet, though. She brandishes her gun at them, firing a warning shot. The men duck behind their car.

After a moment, Acosta emerges. He’s up on the roof, doing repairs.

Don’t worry, he tells Miller: he knows these men.

That, at least, is how Terlingua resident Mimi Webb Miller is portrayed in the latest season of Narcos: Mexico, which came out in February. For those looking for something to binge while social distancing, Narcos: Mexico explores the 1980s roots of Mexican drug trafficking, from loose operations to organized empires. Miller’s appearance is thanks to her association with Acosta, who helped run the Juárez Cartel before he was killed in a shoot-out with Mexican and U.S. authorities in 1987.

Miller, who was romantically involved with the real-life Acosta for around a year in the late 1980s, is featured in four episodes. She’s portrayed by Sosie Bacon, an actress from California who adopted a trademark Texas twang for the role. 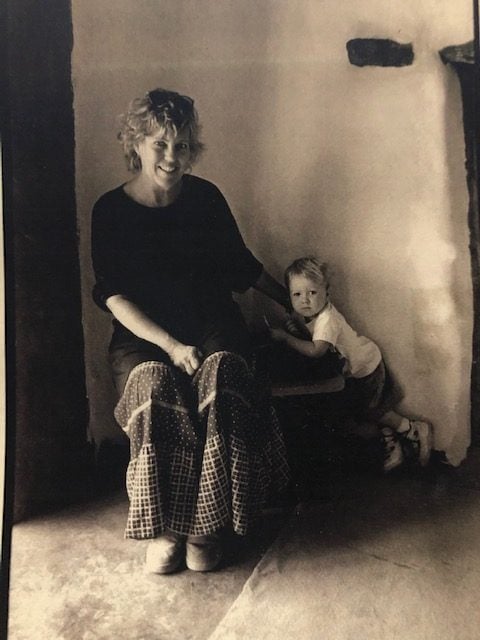 Mimi Webb Miller poses with a young Zane Ivey in her Terlingua Ghost Town home in 1996, a few years after Miller spent time with Pablo Acosta. Her experiences from that period are portrayed in the Narcos: Mexico series, now streaming on Netflix. Photo by Bill Wright, courtesy of Mimi Webb Miller.

In real life, Miller, 70, doesn’t have a twang. Not anymore, at least. That’s despite the fact that Miller grew up in Wichita Falls in North Texas, and her uncle was former Texas Senator John G. Tower — an association that led The Oprah Magazine to call her “Texas royalty” in a recent interview.

Another person might brag about their ties to a drug kingpin and a politician. But when the conversation turns to her past, Miller is wary of having nearby visitors overhear her dramatic life story.

Dressed in a white-button shirt and a plaid sarape, she’s now a casting director in Los Angeles and a hotelier in Terlingua. She’s sitting outside her hotel, the La Posada Milagro Guesthouse in Terlingua, greeting visitors and locals as they stop by for lunch. She doesn’t always know what other people will make of her backstory.

A roadrunner, whose official name is “Rigaberta” but whom Miller prefers to call either “Bob” or “Ruth,” prowls the patio from crumbs and spare bits of food. As curious tourists watch on, Miller introduces them.

“Her name is Rigaberta,” she tells one group. “If there’s any crumbs, she cleans up real well.”

“She never gets in any trouble here,” she says. “She’s real tame.”

In some ways, it’s been a long journey for Miller. After Acosta was killed, she left the region, worried that someone would assume she knew too much (she was close to a top cartel leader, after all) and try to harm her. Those fears were not totally unfounded. Miller heard there were threats on her life and spent years trying to keep a low profile, but, “I’ve never been low profile,” she says.

“I had to hide, and I didn’t know how to not stand out.” And while she visited the Big Bend at least once a year, it wasn’t until the mid-1990s that she felt comfortable moving back.

In other ways, Miller’s journey is full circle. For one, she never could quite bring herself to fully leave the Big Bend. Now, from her home above Terlingua Ghost Town, she can still see the mountains in Mexico that were once her stomping ground.

She can’t quite see San Carlos, also known as Manuel Benavides, the small town in the mountains in the middle of Parque Nacional Cañon de Santa Elena in Mexico where decades ago she ranched, threw parties and guided horse tours. Occasionally, her tour group would come across some of Acosta’s men. “There was only one road in and one road out,” she says.

And with the release of the latest season of Narcos: Mexico, Miller has also seen a renewed interest in her past. That includes pesky journalists and media types as well as the visitors or locals who have made the connection between this Mimi Webb Miller and that Mimi Webb Miller. The other day, she got recognized at the Alpine tax office.

All of which brings to mind a question: is the portrayal of Miller in Narcos really accurate? Did she and Acosta really work with authorities in hopes that he could escape the business and lead a safe and normal life? Are all these plot points really true?

Yes and no, Miller says. She points to one big discrepancy: her ranch was in Mexico, not in the United States as portrayed in the show. “He never came over here,” she says of Acosta, referring to this side of the Rio Grande.

Her character’s subplot is Narcos: Mexico “is actually much less dangerous than what I lived through,” she says. “I have a lot of PTSD still. But as old as I am now, I thought maybe I could give myself some more inside peace by talking about it.”

“This is so bizarre to tell you outright,” she adds. And with that, she starts reflecting.

It was in the 1970s when Miller first started coming to the Big Bend. She visited Boquillas Canyon and boated down the Rio Grande. She quickly fell in love with its natural beauty and culture. The region back then was still a hinterland. Mexicans and Americans waded across the river, and Lajitas was just starting to transition to a tourism town. Miller attended a cockfight on an island in the middle of the Rio Grande.

At the time, Miller was living in Houston but coming to the Big Bend whenever she could. On one early trip, she remembers meeting Acosta. She was with a friend near Ojinaga when she says he came to the window of the car, leaned in and said hello. She remembers him having a little spittle on his lip.

Eventually, Miller decided to move to the region full time. She moved onto a 3000-acre ranch near San Carlos, replete with a 40-foot waterfall and “the best drinking water in the state of Chihuahua.” She met a man named Maño, fell in love with him and was soon helping to care for his two children. “I just thought I’d found heaven,” she says.

If the story so far seems fragmented and dreamlike, it feels a bit that way to Miller as she explains it too. Part of it, she says, is the PTSD — a condition that’s left her struggling to make sense of those years and especially her time with Acosta.

It was also the 1970s, and Miller was young and carefree. At the time, “it didn’t seem wild,” she said. “It just naturally progressed. And when you’re in your twenties…” she trailed off.

Living in San Carlos, Miller soon got to know Acosta. “This was his territory,” she says. “We all knew who he was.” Some referred to his posse as a “mafia,” but Miller didn’t quite believe it. “I thought they were just small-town, that they didn’t really know what they were saying,” she says.

In retrospect, maybe she could have noticed small signs. Like that group of women who used $100 bills when they visited Lajitas.

“My rationale was literally, we don’t have a bank,” she says. “I could have probably thought it through. But in my head, we were remote from a grocery store — much less a bank.”

Eventually, Miller and Maño’s relationship fell apart, and Miller started seeing Acosta. When another reporter asked her a few years back what she saw in the druglord, she put it succinctly.

“He was kind of like Kissinger,” she told The New York Times in 2014. “Not the handsomest man I’d ever met, but a strong guy, with a lot of charisma.”

It was around 1986 and ‘87. Miller and Acosta saw each other for less than a year before he was killed in the shootout with authorities.

Those years are about where the subplot of Mimi Webb Miller, the larger-than-life, Hollywood character in Narcos: Mexico begins. And much of what’s in the show is — spoiler alert — true, Miller says. More or less, at least.

It is true Acosta was considering a negotiation with U.S. authorities. “They offered him a deal,” she says. “At the last minute, he said he didn’t need to take it.” She thinks he knew the end was getting close.

But that wasn’t the only reason federal authorities wanted to talk to Acosta, Miller says. “There was a rumor put out that the Libyans were getting ready to cross the border,” she says. “Acosta had talked to the powers that be and investigated that in Chihuahua City.”

It was also true she was pregnant, though she never told Acosta. She thinks he probably figured it out.

She never delivered, though. A neighbor in Mexico fired at her ranch during a disagreement over his goat-grazing practices. Her horse was spooked, and the next time Miller tried to ride it, it bucked her. She miscarried.

After Acosta’s death, Miller returned to Wichita Falls for a school reunion. She joined a scientific study on depression in Fort Worth. She found work as a casting director in Los Angeles. She returned to Terlingua and opened a hotel.

It’s been an unusual life’s journey, to say the least, and even Miller seems to still be making sense of it.

“Some of it I really didn’t understand until now,” she says. “If that makes sense.”