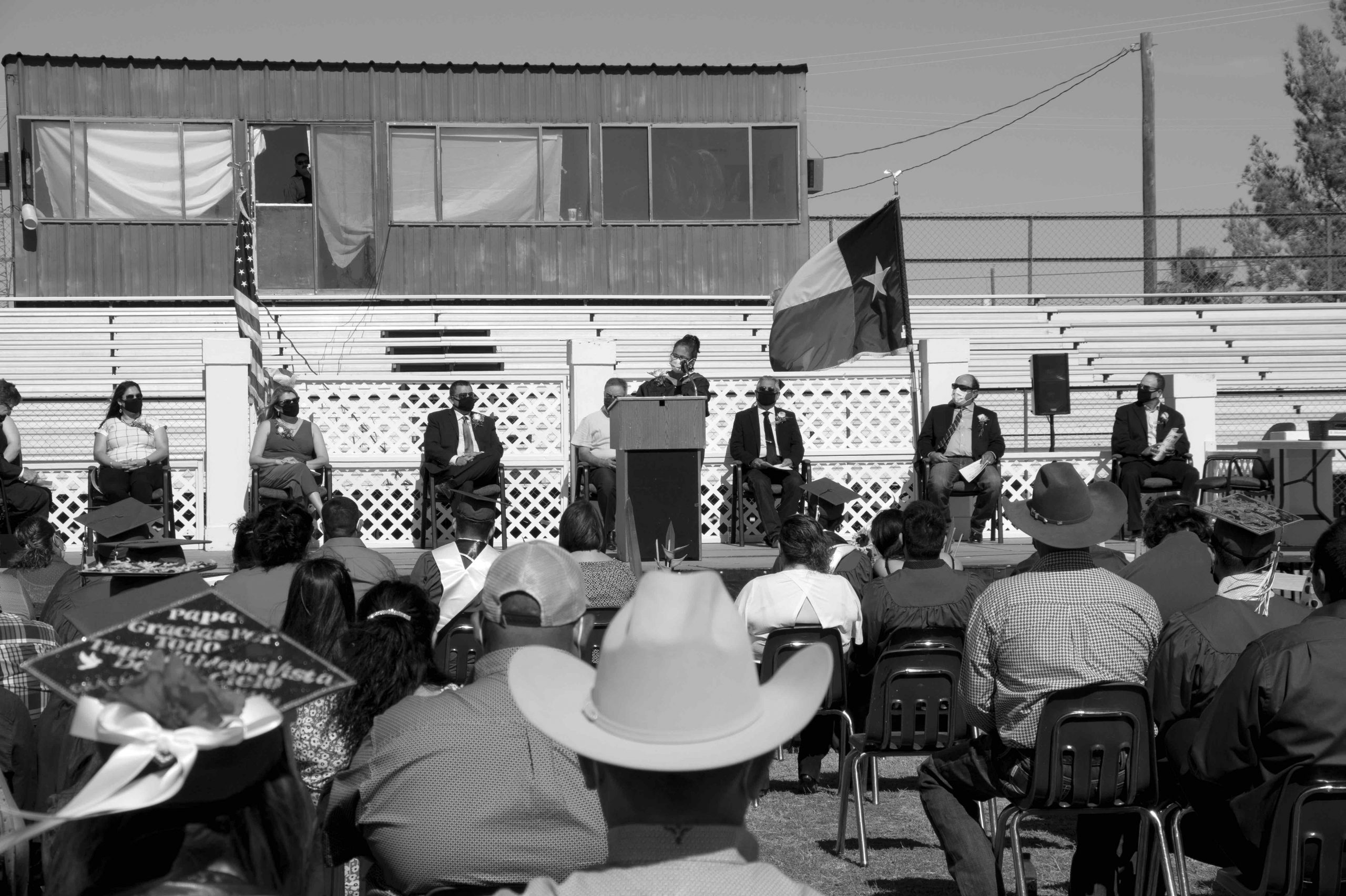 PRESIDIO — On Friday morning, Presidio High School seniors participated in a longstanding tradition as they accepted their diplomas and graduated. But as the coronavirus pandemic upends life across the globe, some aspects of graduation this year were very different.

Families in attendance were separated by six feet of space, in accordance with guidelines from the Texas Education Agency, said Hevila Ramos, the school principal. Each student was only allowed two guests.

Attendants were screened for symptoms upon entering, and the school handed out hand sanitizer and face coverings, Ramos said. Students got to accept their diplomas in-person and pose for a portrait — though the senior circle tradition was replaced with a new version this year: portraits of seniors were displayed around Presidio, and after the ceremony, there was a drive-thru parade through the city.

“It’s maybe not the most traditional graduation,” Ramos acknowledged. But for some seniors, it felt great just to have an in-person graduation at all.

When Presidio High School seniors left for spring break, they had no idea that coronavirus concerns would quickly engulf the region and that they wouldn’t return to in-person classes.

“That was the sad part,” said Karime Baeza, the school’s salutatorian. “We were expecting to come back from spring break.”

Still, Baeza was thrilled that the school was able to put on an in-person graduation — even if the ceremony was different than usual.

“We were really close to having nothing,” she said. “In times like this, it’s really nice to have something to look forward to. It was a little light in our community.”

“It was pretty unique,” she added. “No other class has witnessed a graduation that involves being six feet apart.” She was sad she couldn’t invite more family members but was trying to stay optimistic and see “the positive things in something really tragic.” On that note, she added that graduation had allowed her to see “faces I hadn’t seen in quite a long time.”

“It was nice seeing my classmates,” she said. “I hadn’t seen them all together in one place since March.”

Angelica Aguilar, a teacher at Presidio ISD and the senior sponsor this year, said holding an in-person graduation presented its own challenges. “We didn’t have a chance to practice,” she said.

But she said she wanted to make sure that seniors got a good celebration, so long as they worked within TEA guidelines. “We gave the students a chance to voice their opinions,” she said. And the students were clear: they wanted a graduation ceremony and a parade. A group of parents organized the parade, while the school figured out the rest, she said.

Aguilar acknowledged it was “a tough moment for most of the students.”

“They wanted the whole family to be there,” she said. “Graduation in Presidio is a big thing. Parents and grandparents from all over the place come to graduation.”

But much like the rest of the school, Aguilar was just glad teachers and administrators had figured out a way to celebrate the students — even if the celebration was socially distant.