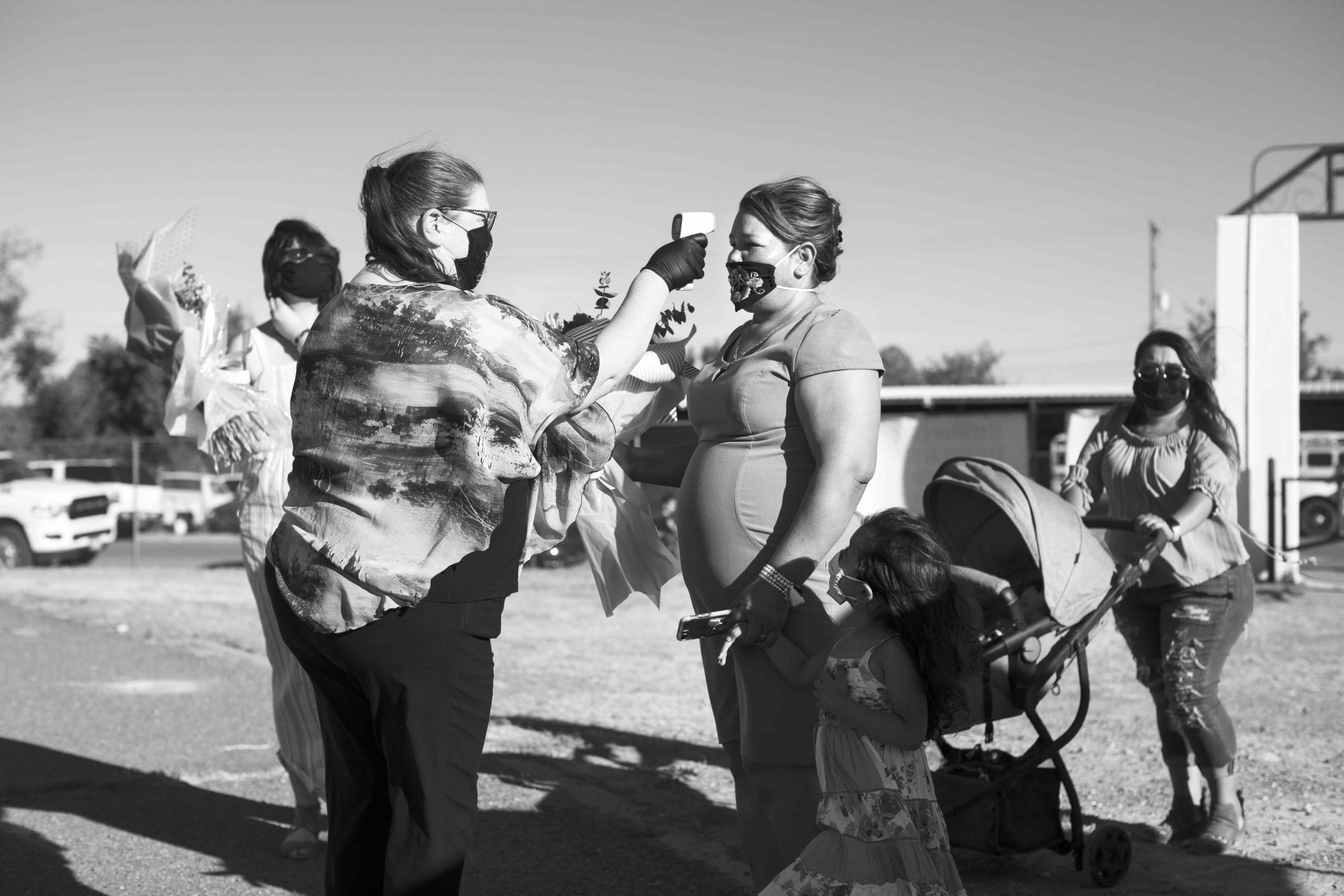 From temperature checks to assigned seating, Marfa ISD administrators took a number of precautions in an effort to ensure safety at Marfa’s in-person high school graduation ceremony on Friday. Here, Cheri Aguero, left, a teacher at Marfa elementary, checks the temperature of an attendee. Photos by Maisie Crow.
Subscribe

MARFA — As the coronavirus pandemic upends life around the globe, some aspects of Marfa’s graduation ceremony this year were very different.

The ceremony was held outdoors, in keeping with guidelines from the Texas Education Agency. Attendees sat six feet apart to conform with social-distancing rules. Some wore face masks in the school-spirit color, purple.

Entrance into the event was staggered to prevent crowding. Administrators stood at the gate of Martin Field to check temperatures. And in lieu of in-person remarks, many graduation speakers remained seated while their speeches played over loudspeakers.

In other ways, though, the 2019-2020 graduation ceremony was no different than previous years. Students seemed alternatively sad and excited to be leaving school. Parents turned teary-eyed with pride as they watched their children take a formal step into adulthood. 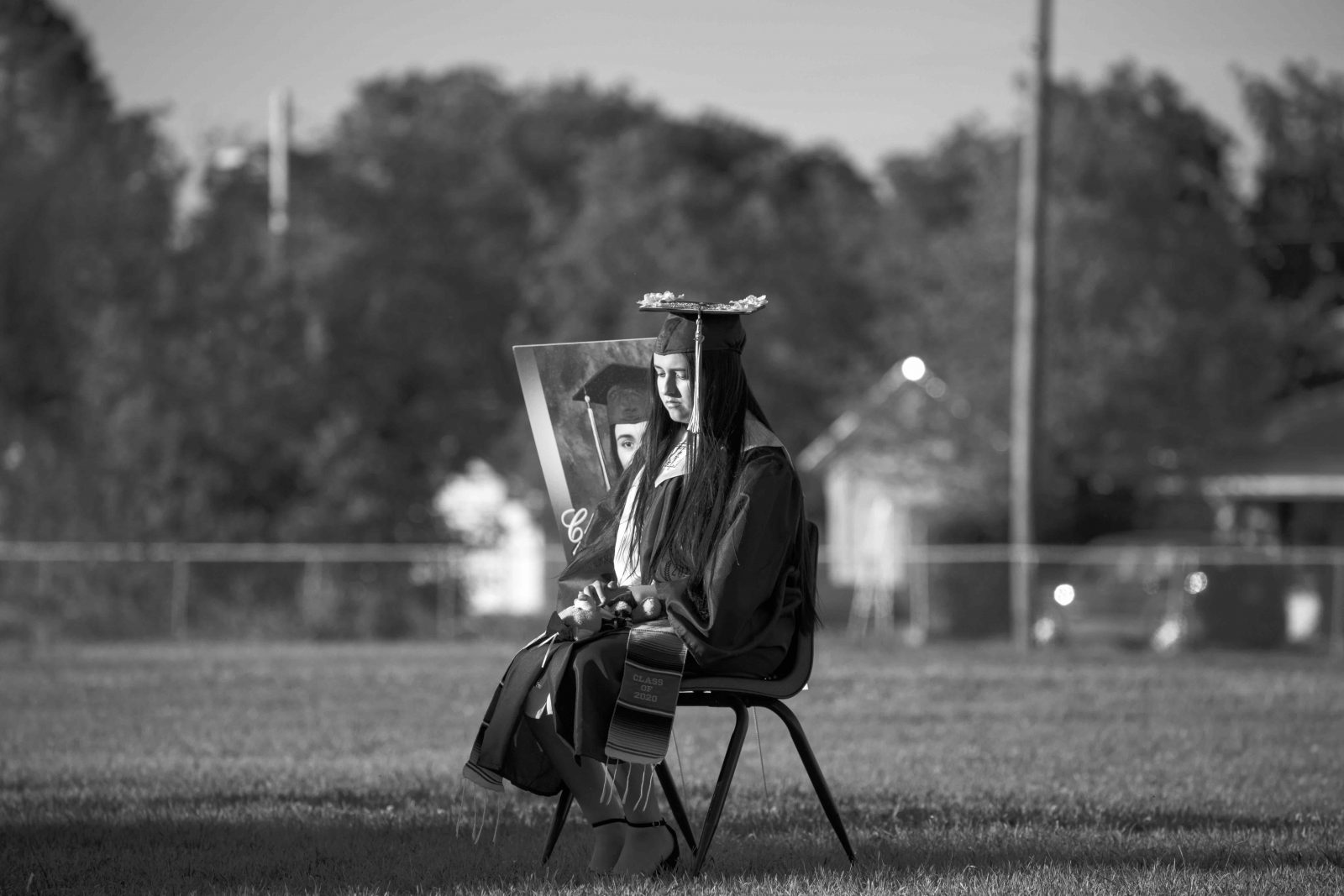 Graduate Kimberly Soto-Torres appears lost in thought during Marfa High School’s graduation ceremony on Friday. With pre-recorded audio played from a loudspeaker, Soto-Torres and one other graduating senior — Alexis Maldonado — remained seated as they gave the invocation for the ceremony.

One of those parents was Yolanda Jurado, a Marfa ISD board member and mother of salutatorian Isabella Morales. She was thankful the school was able to organize in-person graduation but was sad about the loss of other traditions, from family visitors to post-graduation parties. Her advice to Isabella, who felt the same way, was to realize that graduation would be “such a small portion in your big realm of your life.”

As salutatorian, Morales was one of the few people to give an in-person speech. “It was so heartfelt,” Jurado said. “I think everybody was crying.”

“The pride and the honor I felt being her parent was not affected one bit by this COVID situation,” she added. “I was so touched by her speech.”

The event kicked off around 6 p.m. Although most of the graduates remained seated during the main ceremony, many still got to participate, with speeches and songs playing over a speaker system.

Samantha Jimenez and Bryan Torres welcomed the crowd and made introductions. Elena Hernandez and Tais Chanez, meanwhile, gave a tribute to parents in both English and Spanish.

“You’ve been there for every accomplishment in our lives,” Hernandez and Chanez said in pre-recorded speeches. “With your love and support, we will be able to get through the rest of the book successfully.” 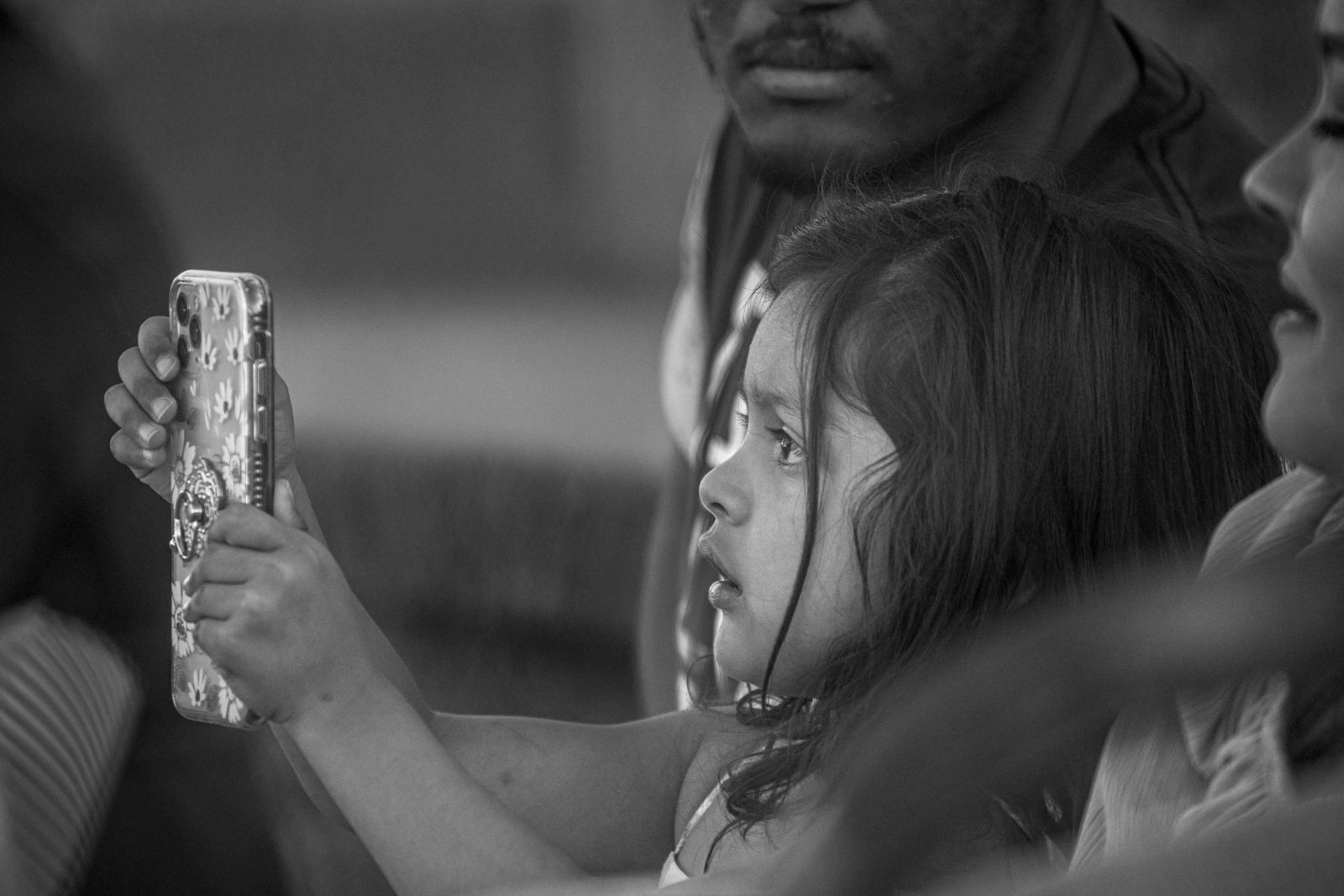 Then it was time for the main speeches, starting with salutatorian Isabella Morales. She acknowledged the “extraordinary, unprecedented” circumstances of the event but said she wanted to give a “heartfelt thank you to parents and teachers.”

“From the ABCs to the quadratic function, that’s all you,” she said.

Morales said she and fellow students were at a “pivoting point in our lives” that would see them go on to careers in a variety of fields — “even professional gamers.”

Noting that many in her generation were born shortly after 9/11, Morales said they had been “tested from the start.” “The virus has stripped the last semester of our senior year from us,” she said.

But she urged her classmates to “remember we are not alone” and that the rough experiences had “made us stronger people.” Then, as Morales started to tear up, she once again gave thanks to her family members, including “to my ugly brothers.”

Jarad Forristal, the valedictorian, spoke next. His speech was shorter, but just as heartfelt.

First, Forristal thanked administrators for accommodating an in-person graduation and giving students “a break from quarantine.” “Even in this time, the heart of Marfa is still beating strong,” he said.

To his fellow seniors, Forristal said that “no matter what path you take, I hope you’re happy.” And he gave another round of thank-yous to parents and school workers, including to the cafeteria faculty for feeding him.

There were more speeches, including by senior sponsor and Marfa Head Coach Arturo Alferez. Administrators in masks and gloves handed out diplomas. Ruben Watts-Ortiz led the ring ceremony, while Avery Beltran led the tassel ceremony and Alyanna Hernandez and Angelica Quinonez gave the final benediction. 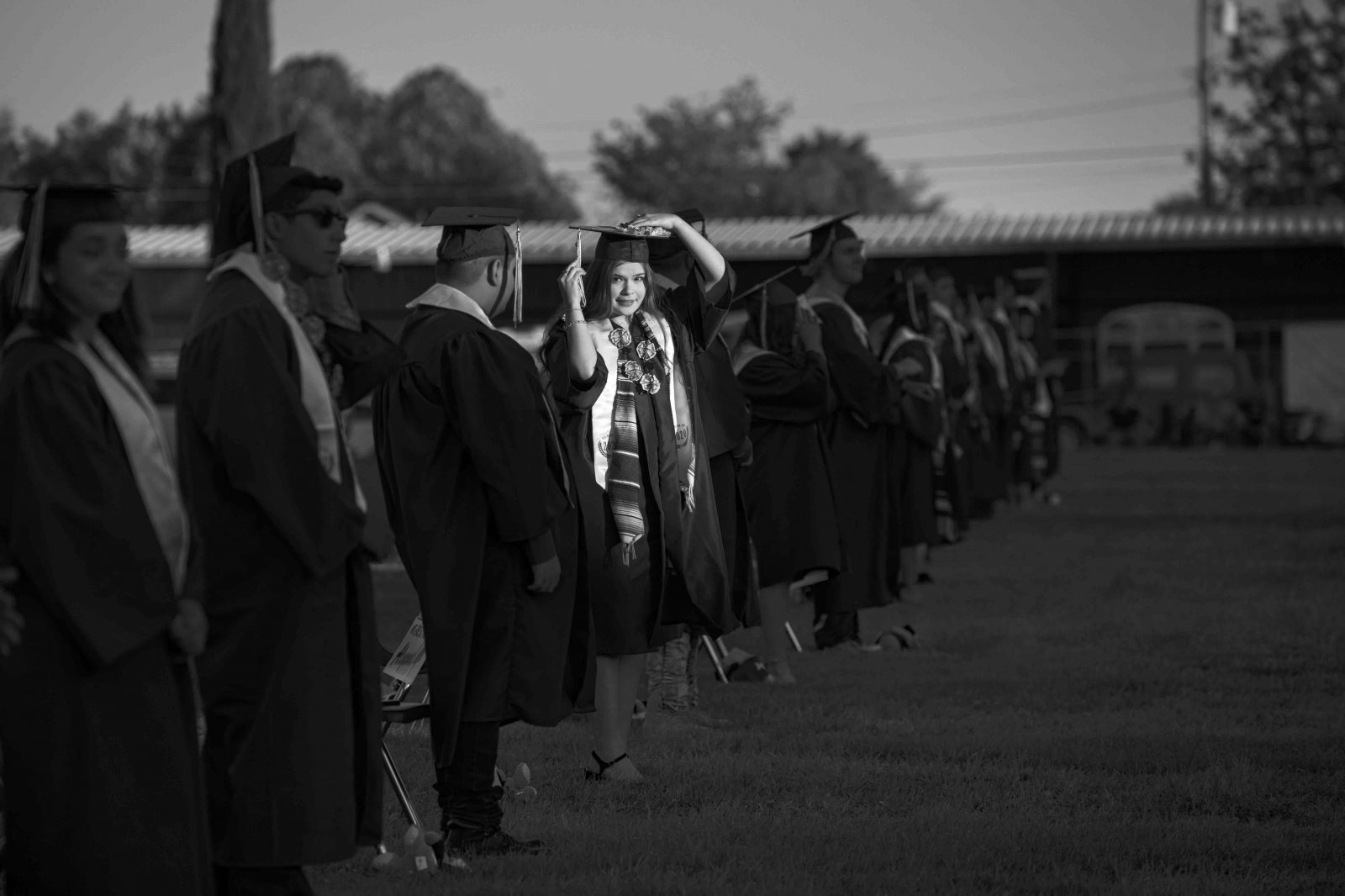 Finally, Adonaka Marquez led the class in the senior circle ceremony — though it was a little different this year.

Walking out to the far end of the field, graduates held onto a rope and danced in a circle. The rope was marked every six feet, so that students could still be together while conforming to social-distancing guidelines. And as they danced, the song “My Wish” by the pop-country band Rascal Flatts played in the background.

And with that, the ceremony was over. Chaperones led attendees off the field to keep them from crowding the exit.

One of those graduates on Friday was Elena Hernandez. With high school now behind her, she’ll be attending Texas A&M University in San Antonio, where she plans to study education.

Hernandez said losing the end of her senior year had been “definitely disappointing.” Her class had missed out on big traditions, including prom and a senior trip, as well as smaller ones, including softball games or just spending a couple final months horsing around together.

“Since we couldn’t interact with people, graduation wasn’t as emotional as it could have been,” she said.

In the end, though, Hernandez said she was grateful Marfa ISD still had a graduation, even if it did feel different than past years.

“A lot of other schools couldn’t do any graduation at all,” she said.

Coronavirus measures, and a teacher retires: This week at the Marfa school board