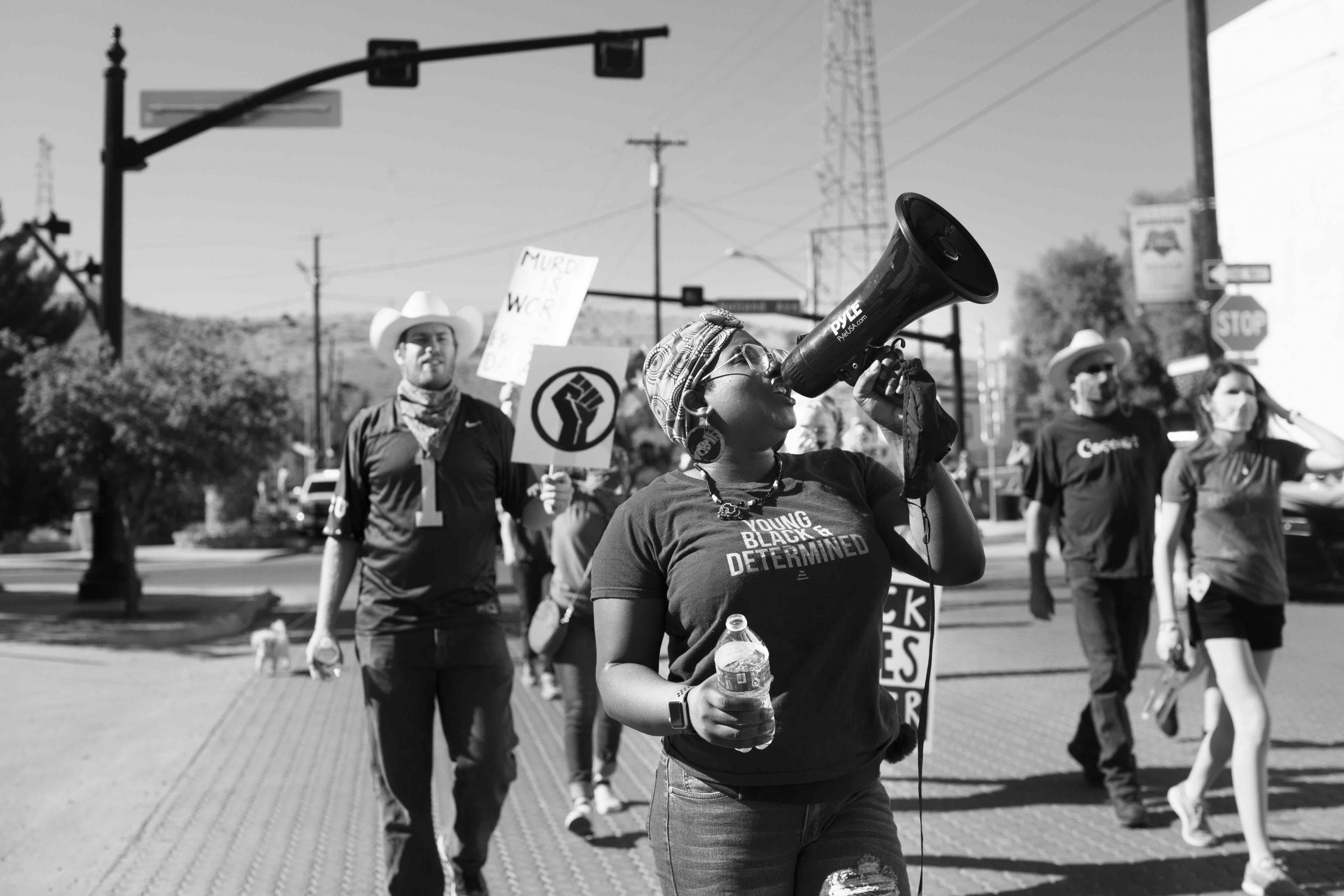 Sedia Woods led a march for Black Lives Matter in Alpine on Saturday. At the demonstration on the courthouse lawn, Woods urged participants to act with love and start difficult conversations about race issues in America. Photo by Maisie Crow.
Subscribe

ALPINE — Hundreds of Big Bend residents gathered for a Black Lives Matter demonstration on a hot June morning last Saturday in Alpine. With an estimate of over 300 attendees, it was one of the largest protests in the Big Bend’s recent history.

The peaceful gathering echoed a movement across all 50 states, where over 700 protests have demanded justice for the deaths of Black Americans at the hands of law enforcement.

Sedia Woods, an African American Sul Ross State University student, led the march down Holland Avenue with a bullhorn, with chants of “Color is not a crime,” and “There are no excuses for human rights abuses.”

Residents and business owners stood in doorways as the march processed. David Busey, a local jeweler, was in his shop when the protest came by. “It’s a national situation, and Alpine is just a reflection,” he said, calling the event a “good thing” that was “very appropriate for these times.”

Others, like Alpine resident Wyatt Kibbe, said he was there on Holland Avenue to “make sure things didn’t get out of hand,” like it had “in larger cities.” Sporting a “Make America Great Again Hat,” Kibbe said, “People can do what they want to do, but it’s so far away from where it originally happened.”

The Alpine protest on Saturday materialized almost two weeks after George Floyd, a Black man from Texas, died from asphyxiation from sustained pressure when a Minneapolis Police officer used an unauthorized restraint of a knee on Floyd’s neck for nearly nine minutes. A bystander filmed the incident, which went viral and sparked protests that have already led to police reform from New York to Minnesota.

For Lauren Martinez, a mother in Alpine, it was Floyd’s cries for his mother as he suffocated that hit her hardest. Martinez said she attended the march because,”If I don’t support it, would my child be next? I have four biracial children and they are just amazing, and I can already see a trend where they are targeted,” saying she has noticed “the color of their skin gets them less favor.”

When the march arrived at the Brewster County Courthouse, Woods stood on the steps, overwhelmed and in tears as protesters flooded the lawn. Addressing the crowd, she said, “For generations, African Americans have been fighting this fight. It is unfair that I am 22, have a whole life to live and I’m ready to die for it. That’s a problem.”

Calls for change from Woods were hemmed with a message of love, and the student continually emphasized the need for conversation, at one point addressing the one counter protester who was yelling over her, saying “I love you,” and asking to speak with him afterward. A message of racial justice in Alpine was ringing out from Woods, a student who attends Sul Ross, a university named for a confederate general, in a county named after a confederate colonel.

Dae Leyva took to the steps to speak about living in Alpine as an Afro Latina woman, having to moderate her behavior more than her white peers in order to avoid negative attention from police or authorities. “Educate your children so my kids don’t have to do what I’m doing right now,” the young college student implored.

Alpine Mayor Andy Ramos and Brewster County Judge Eleazar Cano both spoke in support of the event. Ramos said his ancestors were slaves and buffalo soldiers, and that the racism he experienced growing up in Fort Davis had been overcome with the work of the League of United Latin American Citizens and other organizations. “But there’s still racism all over here, it’s been hidden and compressed, and now with our president it’s reared its ugly head,” Ramos said.

“My generation, we did a lot of good, but we stagnated. We need a push in the butt and you guys are the ones who have to do it,” Ramos told the young people in the crowd. “You have to bring social change to this world. What you’re doing, the movement has spread across the world.”

Alpine’s march caught national attention; it was written about on the New York Times’ website, featured on “The Rachel Maddow Show” on MSNBC and discussed on the “Texas Standard,” a radio show syndicated across Texas. Days later, West Texas saw another Black Lives Matter event take shape in Presidio, where a small gathering of young people marched in solidarity with Black Americans.

At the Alpine demonstration, Woods pushed for the small community to start opening up conversations about race as the next step. The event successfully registered 20 new voters and connected protesters to funds and phone numbers to call to demand change.

For Martinez, she hopes to see certain changes after the nationwide protests too. “I would like for everybody on both sides to maybe get more training, stop racial profiling in police departments, and I feel like maybe everybody as a whole could use a workshop,” she said, to discuss racism and teach new skills to civilians and police alike.

Martinez attended with Jessica Torres, another mother concerned for her biracial children. Martinez said, “We went to support the entire cause, but mainly to try to change something for them so maybe they can have a normal life and not end up a hashtag.”