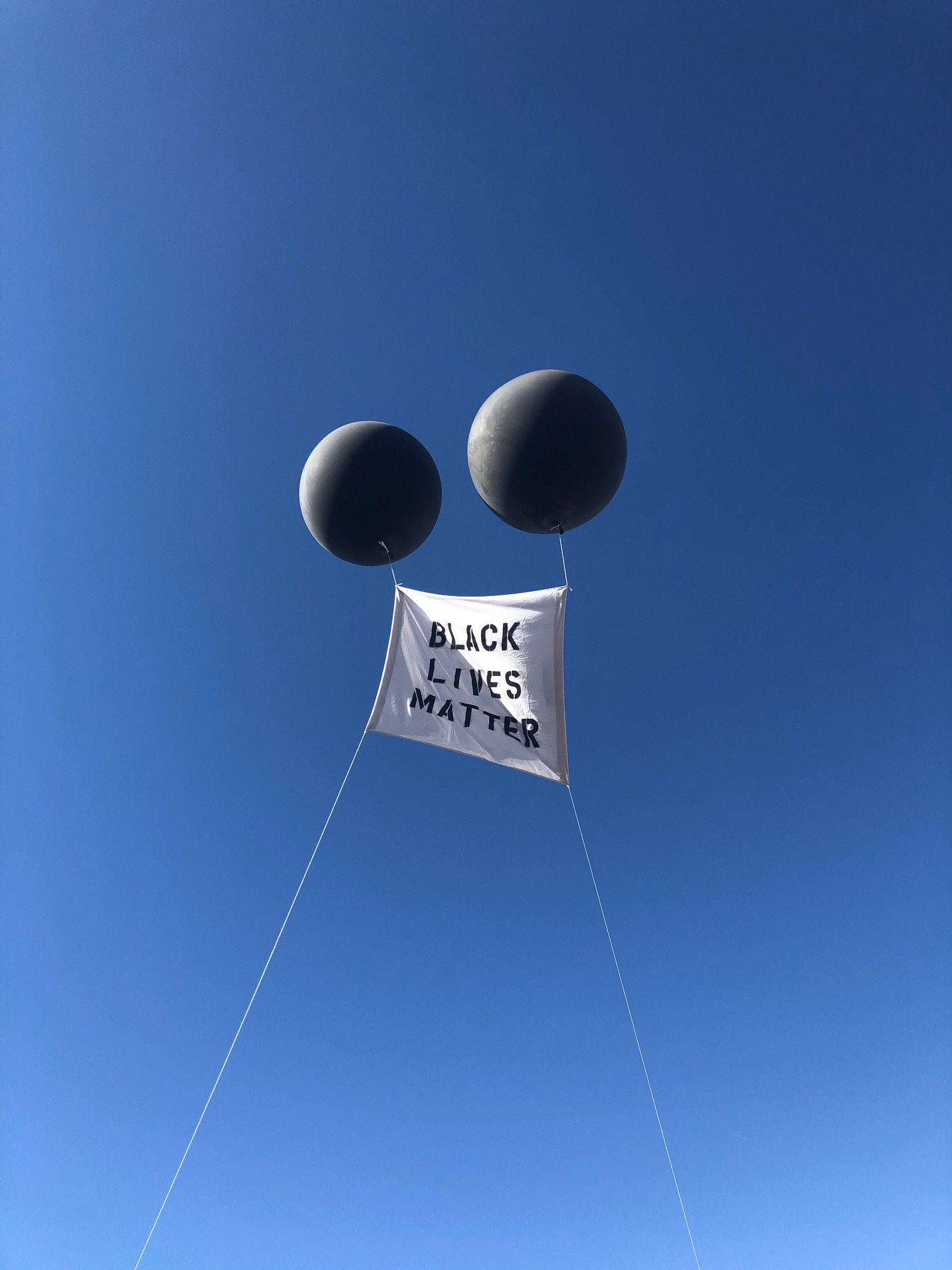 In commemoration of Juneteenth and as a display of solidarity with protesters, a “Black Lives Matter” flag flies over the Ballroom Marfa courtyard on Friday, June 19. Sarah Melendez, programs director for Ballroom, said the two artists behind the project had asked to remain anonymous so as to not distract from the message. Photo by Gabriela Carballo.
Subscribe

MARFA — Ballroom Marfa is taking a stand for the Black Lives Matter movement.

With protests across the country over the death of George Floyd — one of the latest Black Americans to die at the hands of law enforcement — Ballroom announced earlier this month that it was donating $10,000 to racial justice causes.

The donation was split between four organizations: Blacks Lives Matter, Color of Change, the Innocence Project of Texas and the NAACP Legal Defense Fund.

In a lengthy social media post about the donation, Ballroom said it “stands in solidarity with the movement for black lives, and with all those working to dismantle systemic racism in this country. “

“Violence against Black Americans and the systems that produce and perpetuate it, have caused incalculable grief, terror, and physical suffering,” the post continued. “We cannot continue to live in a world like this.”

Then, on Friday — Juneteenth — an art piece went airborne over the Ballroom courtyard. The piece was simple: a banner proclaiming “Black Lives Matter,” connected to two black balloons.

“We wave this flag to commemorate Juneteenth, the liberation of enslaved African-Americans in Galveston, Texas on June 19, 1865,” explained another social media post from Ballroom. “Let’s remind ourselves that every Texan and American deserves absolute freedom, dignity and respect.”

In an interview, Sarah Melendez, programs director for Ballroom, said the piece came together in about a week. Two artists approached Ballroom to propose the piece, and “the conversation was really easy,” Melendez said. Ballroom was “fully aligned” with the goals of the project and quickly gave the go-ahead.

The two artists behind the piece decided to remain anonymous. They didn’t want to detract from the message, Melendez explained.

“They wanted the message to be centered around Black Lives Matter and not necessarily be about them or taking credit,” she said. “They just really wanted to allow the action to speak for itself.”

Ballroom staff and founders have been “really moved” by the recent demands for racial justice, Melendez said. Ballroom watched this year’s protest movement gain steam across the country — including with a march in Alpine, which several Ballroom employees joined. The developments prompted conversations within Ballroom about “what’s happening in the world” and “how we could support the movement.”

Asked why this particular moment has had so much resonance for people — why George Floyd, and why now? — Melendez cited a few factors. On the national level, “I think it has to do with the sort of the immense amount of pressure of our current cultural and political climate,” she said. People were isolated and frustrated due to coronavirus, and there was a growing awareness not only of injustice in general, but of how “a lot of the people that have really been affected by the coronavirus are minorities and people of color.”

But while George Floyd’s killing happened in Minneapolis, the movement had resonance across the country, including in the rural Big Bend. Melendez cited what she described as “over-policing” in the region. Marfa, she noted, is home to a range of local, state and federal authorities, from the Presidio County Sheriff’s Office to local offices for Border Patrol and the Texas Department of Public Safety.

Taken together, all those ingredients were the “perfect recipe for a movement,” Melendez said. “People are just really fired up.”