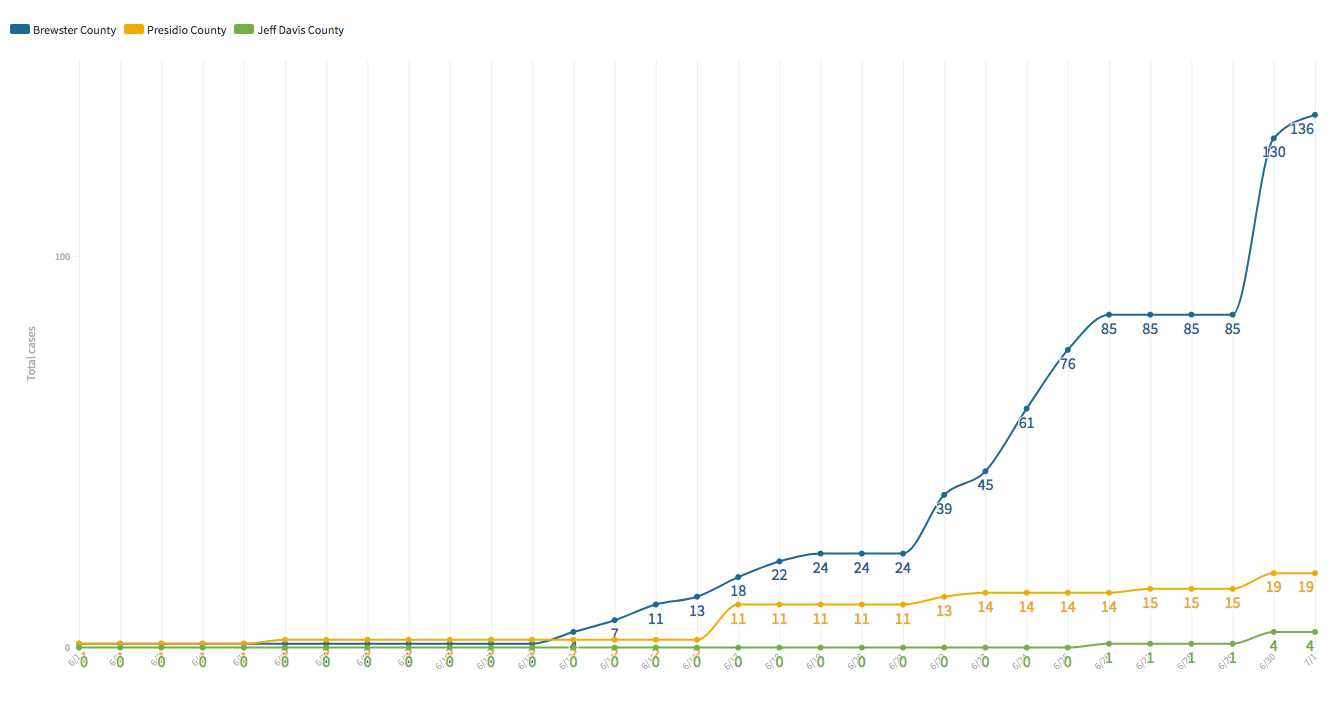 The above graph shows the dramatic rise of coronavirus cases, particularly in Brewster County, which has seen a more than sevenfold increase in confirmed cases in the past two weeks. For this graph, The Big Bend Sentinel is using data from the Texas Department of State Health Services. As we’ve noted previously, there are often discrepancies between state counts and local ones. Graph by Stephen Paulsen.
Subscribe

TRI-COUNTY — The graph above helps show how bad the outbreak in Brewster County is getting, even when compared to Presidio and Jeff Davis counties, where cases are also rising. In just two weeks — from Wednesday, June 17, until Wednesday, July 1 — cases in Brewster shot from 18 to 130, according to data from the Texas Department of State Health Services. That’s a more than sevenfold increase.

Put another way: even with limited testing and hundreds of still-pending results in the tri-county, around 1.5% of Brewster County residents — or fifteen out of every 1,000 people — are already confirmed to have coronavirus. That’s a stunning figure, and it’s three times the statewide proportion, where around 0.5% of Texans are confirmed to have the virus.

Keep in mind: Texas on average isn’t doing particularly well, either. Experts have pointed to the state overall as a particularly hard hit region. On Tuesday, Texas’s new daily count of cases — at 6,975 — was higher, Newsweek reported, than any daily highs in Italy when that country was a global epicenter for the virus. And Italy has more than twice as many residents.

When looking at Alpine specifically, the situation looks even worse. On Tuesday, Brewster County was reporting 137 cases, a slightly different number than state health authorities. And of those cases, officials said, around 95% were in north county, which primarily refers to Alpine.

Extrapolating from that data means that around 130 cases in Brewster County are linked to the county seat. In other words, around 2.2% of Alpine residents are already confirmed for the virus — a rate more than four times worse than the state average.

Even those numbers likely do not capture the full extent of coronavirus in the region. After all, there are almost certainly some residents who haven’t been tested and may never be. And at press time, more than 800 tests in the tri-county — some of them likely positive — were still pending results.

By comparison, both Presidio and Jeff Davis counties are doing well, with rates of confirmed cases still well below the state average. At press time, around 0.2% of residents in Presidio County were confirmed to have the virus, as were around 0.17% of Jeff Davis County residents.

Some contrarians have argued that increased numbers of confirmed coronavirus cases are simply the result of more testing. Those contrarians include President Donald Trump, who made this argument in Tulsa last month and said he was asking officials to “slow down” testing as a result. (A Trump spokesperson said Trump was just “joking.” Trump later said he wasn’t.)

There is some truth to this argument. New York City, for example, has more than 200,000 confirmed coronavirus cases — a number far larger than the entire population of Presidio, Brewster and Jeff Davis counties. But that number says nothing about the improving situation in the Big Apple or the growing coronavirus outbreaks in Texas.

Likewise, testing in the tri-county is starting to ramp up after months of lagging.

Case counts are affected by a range of other factors, from the number of tests conducted to the population of an area. Thankfully, health experts have a way of resolving that problem. It’s called the positivity rate, and it measures what percentage of people who got tested later received positive results.

Calculating line graphs of positivity rates requires detailed by-date information on the total number of cases and tests in an area over time. The Big Bend Sentinel requested this information from both the Big Bend Regional Medical Center and Brewster County Health Authority Ekta Escovar but did not receive any data by press time.

However, since June 26, Brewster County officials have released detailed information on the number of total tests and negative and positive results across the tri-county. That’s all information necessary to calculate what percentage of residents who received results have received positive ones, which at press time is around 10.2%.

Keep in mind that this is a slightly different measurement from positivity rates, which compare rolling averages of new confirmed cases to new tests rather than using total numbers. At an emergency city council meeting on Tuesday night, Erik Zimmer, city manager of Alpine, said a recent testing push at Sul Ross State University had resulted in an around 6% positivity rate. But that was just for one testing site.

Across the tri-county, in other words, of every 10 people tested for coronavirus in the tri-county who received results, at least one person on average has found out they are positive. Meanwhile, Texas’ average statewide positivity rate is around 14.6%, according to Johns Hopkins University. And some places are doing far worse, including Austin, where the positivity rate is over 20%, or one in five. Those are disturbing figures in a state that just three months ago had barely any coronavirus cases at all.

Texas officials are closely watching the statewide positivity rate. The state calculates this data using seven-day moving averages, a different equation than the one The Big Bend Sentinel used with limited data.

In early May, when the statewide positivity rate was around 4.5% and Governor Greg Abbott started “reopening” the state, he described any positivity rate over 10% as a “red flag.” But Texas hit that red flag last week and has continued to exceed it since. Those developments have prompted a renewed sense of urgency from state officials, who on Friday once again ordered bars closed.

And while testing rates are improving in Texas — the Lone Star State now has the ninth-worst testing rates in the country, rather than the seventh-worst — those below-average testing rates means Texas officials are likely misjudging coronavirus’ true spread. A study, released on Friday by the Centers for Disease Control and Prevention, seemed to confirm as much. After looking at antibody data from at least nine sources across the country, the agency estimated that coronavirus case counts in the United States were between six and 24 times higher than local officials are finding.