JEFF DAVIS COUNTY — Earlier this year, Jeff Davis County joined the rest of the tri-county in imposing bans on short-term rentals as a precaution against coronavirus. But as Governor Greg Abbott reopened the state and public conversations on coronavirus grew increasingly partisan, the path of the Big Bend region’s least-populated county started to diverge from its neighbors.

Take face mask rules. In June, Governor Greg Abbott surprised people across the state when he clarified that local officials could in fact impose face mask requirements in businesses. At the time, case counts were starting to climb in the tri-county, and officials in Marfa warned of “possible spread” after they said a patient was breaking quarantine measures.

The Marfa City Council quickly responded to Abbott’s new guidance, crafting just such a rule. That ordinance was followed by similar rules in Alpine, the City of Presidio and Presidio and Brewster counties — but this time, Jeff Davis County stayed a holdout.

In Jeff Davis, that difference can be partially explained by an ongoing argument over whether face masks are a common sense safety measure or an affront to personal liberties. And while many local officials throughout the region support masks, they’re not always willing to publicly challenge anti-mask constituents.

It’s the same reason why Alpine, rather than requiring masks at businesses, instead decided to require a sign indicating whether masks were required. (Those rules were updated days later after Brewster County passed stricter rules in line with Marfa’s.)

As city attorney of Marfa, Teresa Todd helped craft Marfa’s face mask ordinance based off of one in Bexar County in San Antonio. But as the county attorney for Jeff Davis County, she also says such measures would likely be less popular there.

“Jeff Davis County is a place where people don’t like to be told what to do,” she said. “Particularly by the government.”

On Friday, Governor Greg Abbott delivered another surprise to Texans when he imposed face mask requirements (with a few exceptions) across the state. But that latest order allowed counties with less than 20 active cases, including Jeff Davis County, to request an exemption.

At press time, Jeff Davis County had made no such requests. Barring an emergency meeting, officials there likely won’t discuss the issue until they meet next week. But Kerith Sproul-Hurley, county judge for Jeff Davis County, says constituents are already calling “all day long” to share opinions.

“People feel strongly on both sides,” she added. There are the “people who absolutely do not want to wear masks” and “feel like it’s infringing on their civil liberties.” And then there’s the other side, who “feel exposed and feel we should all protect each other as much as we can.”

Noting that she represented people on both sides, Sproul-Hurley declined to share her personal thoughts on whether Jeff Davis County should seek a mask exemption. “Technically, I could sign off on it,” she added. “But I would prefer that my [county] commissioners were on board too.”

Still, Sproul-Hurley stressed that the county would like more data before making any such decisions. After a military testing site in Fort Davis in late June, 199 tests — or almost all of them — were still pending on Monday.

“Our tests are still coming back in,” she said. “Until I get those numbers, we’re kind of just in limbo.”

As coronavirus roars through Texas, Jeff Davis County has remained a relative refuge, at least officially.

At press time, it had just four confirmed cases of coronavirus. It also has the lowest rate of known infected residents in the tri-county, at around 0.17%. Compare that to Brewster County, where more than 145 residents are confirmed to have the virus and one person has died.

Like other officials who spoke to The Big Bend Sentinel, Jeff Davis County Commissioner Todd Jagger declined to comment on his personal opinions about a mask exemption. But he did stress that “consistency across the board is really important” at the state level because it “eliminates guesswork” of local officials who are just trying to act responsibly and protect constituents.

As part of these debates, Jeff Davis County also confronted challenges over whether to hold a parade on the Fourth of July.

County officials said no, citing coronavirus concerns, and declined to close streets or approve the event. One group of locals then decided to hold a car procession instead, where they could stay socially distant. But some officials saw it as a rogue event that could nonetheless attract spectators and warned that organizers could face fines if they violated Governor Abbott’s statewide safety orders, including bans on gatherings.

Nancy and Bill Davis, owners of the Davis Mountains Inn, helped spread word about the car procession. But they said the event had no formal organization and had instead come together organically.

“We’re abiding by the laws of the land,” Nancy said. “Anybody can be in it; I don’t have a list or anything.” As the Davises saw it, residents and visitors in Fort Davis were going to gather despite officials’ best intentions. And by giving events some structure on social media, the Davises and others could help make sure people had masks and took other precautions.

“We’re not ignoring it,” Nancy said of the coronavirus. Rather than “trying to be a rebellious, unsafe and uncouth group,” she said she and others were “just doing some things that we feel are very proactive.” They pointed to their low visitor numbers at the inn as a sign that the party wouldn’t get too out of control. There was “no comparison” between visitor numbers this month and those last July, Nancy said.

In the end, around 10 cars joined the procession, which kicked off Saturday morning. Some split off in Fort Davis, while the rest drove down to Valentine, where they held a memorial for Virgil Baldwin, a veteran who died in 2016.

Around 25 people joined for that second event, which included a 21 gun salute and a presentation of the flag by a color guard from Odessa. In photos from that event, few if any people appear to be wearing masks.

“We handed out safety items to anybody who wanted them,” Nancy said. “Not very many people wanted them.”

Bill Kitts, sheriff at the Jeff Davis County sheriff’s department, helped give the procession an escort through town before it headed to Valentine. Afterwards, he stayed in town to help manage any festivities.

Not that there was much to manage. “It was the quietest and quickest Fourth we’ve ever had,” he said with a chuckle. “I think we had one fireworks complaint. Usually, we’re running around all night. Everybody was behaving. I was really proud.”

“We didn’t really have that many people in town,” Kitts added. “I think everybody is just staying at home.” As he saw it, the outbreak in Alpine had changed hearts and minds in Jeff Davis County, preparing them not only for coronavirus but for all the safety precautions that come along with it.

“We’re still at four” cases, Kitts said. “Alpine is doubling every few days — and a lot of people here shop in Alpine.” As a result, he thought attitudes from worse-hit areas were “spilling over” and residents were getting used to the “social distancing and the masks.” And the sheriff said the Fourth of July — normally a big party in Fort Davis — had turned into “kind of a non-event.” 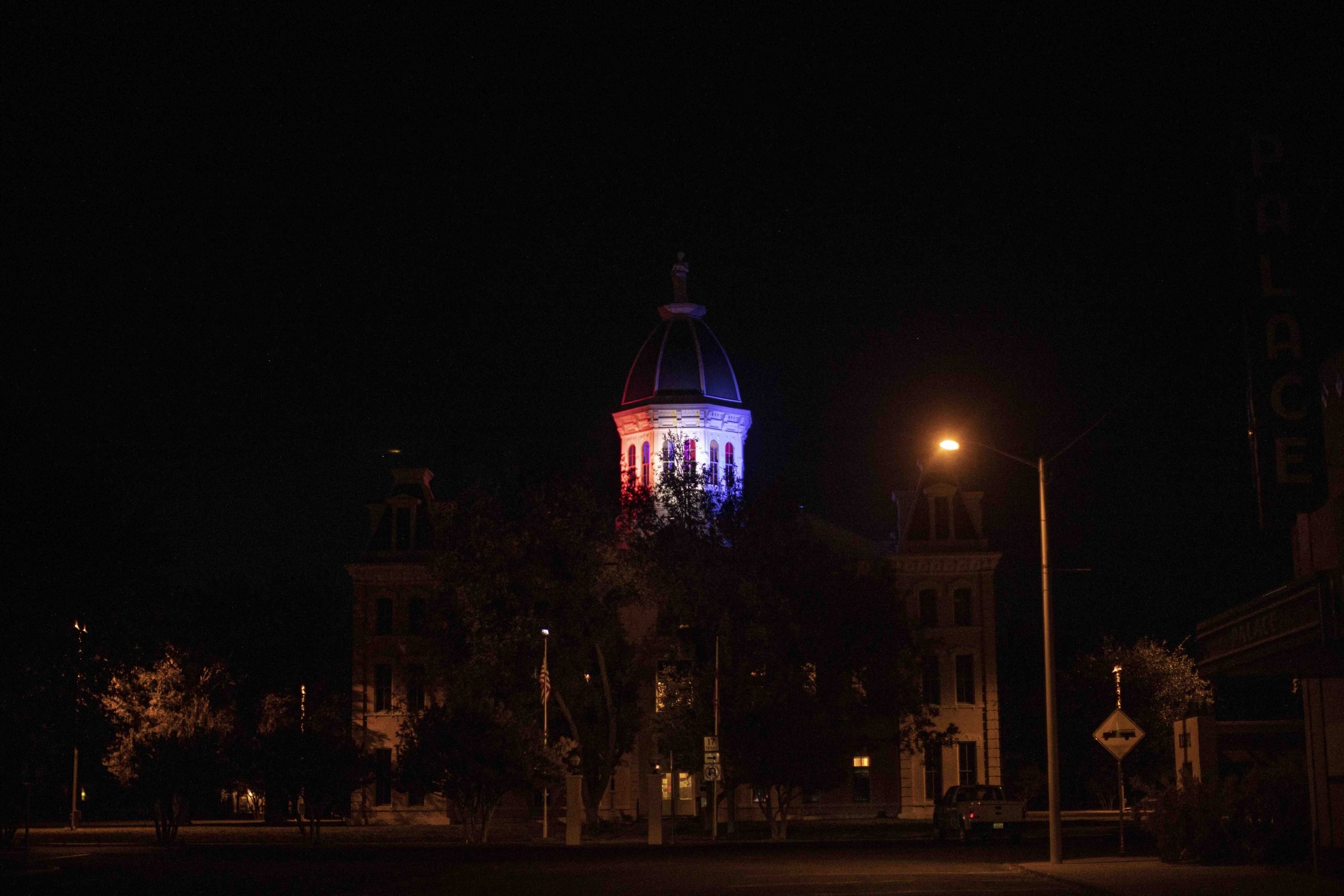