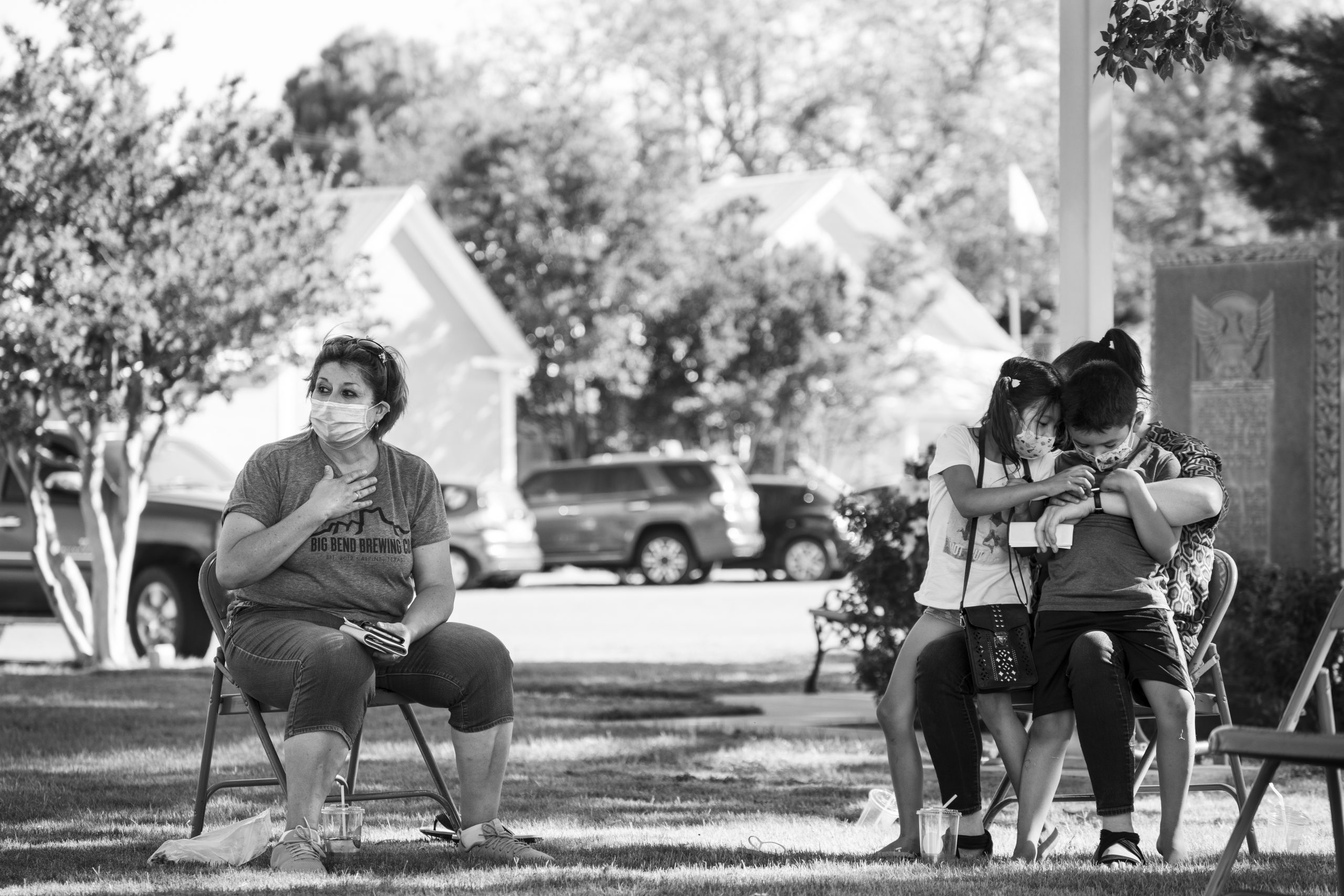 Maria Medrano, a grandparent and bus driver at Marfa ISD, shares her concerns about returning to school during the coronavirus pandemic at a socially distant and outdoor meeting with school officials on Monday evening. “As a parent, I want you to help us,” she told Superintendent Oscar Aguero. “As an employee, I want to help you.” Photo by Maisie Crow
Subscribe

MARFA — Over the past week, Marfa school officials have held several socially distant sessions with parents who are concerned about sending their children back to school during a pandemic. The next school year is almost here, and “Marfa ISD administration is very interested in knowing how you feel,” Superintendent Oscar Aguero said last week on social media.

With chairs spaced out on the Presidio County courthouse lawn, Aguero and other school officials have listened to parents and tried their best to answer questions on everything from distance learning to emergency closures — though they admit they’re also still awaiting more guidance from the Texas Education Agency. As The Big Bend Sentinel was going to press on Wednesday, Marfa school officials held two more such gatherings.

In speaking at the meetings, Aguero has been remarkably blunt about his concerns about state guidance, which requires not only that schools physically reopen, but that they allow students to come to class five days a week. “I don’t agree with the TEA,” he said at one meeting on Thursday. “I don’t agree with what the governor is saying.”

Initially, Marfa ISD planned to have alternating schedules, which would not only limit the number of students inside school buildings at a given time, but also allow school staff more time to clean classrooms and check in on students’ well-being. “We really thought we’d found a safe, controlled situation,” Aguero said, but TEA “took that away from us.”

In a follow-up phone call on Wednesday, Aguero said he’d heard TEA would allow schools to stay in virtual learning for longer at the start of the year. But like so much of this process, he’s still waiting on the official and final word.

A few hours later, there was another update: Local schools could stay closed to in-person learning in the fall so long as they have sign-off from local health officials, a spokesperson for TEA told The Texas Tribune.

It’s an internal debate that Aguero has summed up into something of a mantra, which he’s shared with parents.

In his meetings with parents, Aguero has repeatedly cited his familial situation — besides being a superintendent, his wife teaches at Marfa ISD and he has two kids at the school — as a sign that he’s taking these issues seriously. And many parents seem to be sympathetic.

“I feel bad for Oscar,” said parent Jose “Joe” Grajeda, who has three kids at Marfa ISD. “He’s a superintendent, but he’s also a husband and father.” He contrasted the work of Marfa ISD — which he thinks is doing its best to navigate the tricky situation — with politicians and higher-up officials, who he thinks are more focused on the economy than on saving lives.

In an interview with The Big Bend Sentinel last week, Grajeda made it clear that he plans to keep his kids at home. One of his children has asthma, and his wife, he says, has an interest in education and is getting ready to help the kids with schooling.

“I’ve already made my decision,” Grajeda reiterated in an interview on Tuesday. “It’s going to be 100% home school.” Still, he attended a meeting on Thursday, just to discuss his plans with Aguero and make sure his plans wouldn’t conflict with guidance from TEA.

As Grajeda sees it, parents who can homeschool should do so. That way, he says, the school will be less crowded — and have less disease vectors — for families without that option.

In total, Aguero estimates nearly 50 parents have reached out with questions and concerns. Those include about 30 parents who attended the outdoor meetings and another 10 or so or called. “And another three or four at the grocery store,” Aguero said with a chuckle.

At press time, Aguero and other administrators were reaching out to parents to do a rough poll of what their plans are. As of Wednesday, Aguero said about 50% of lower-grade children would likely return to school, along with a slightly higher proportion of upper-grade kids. He said the appeal of athletics and sports in upper grades was likely factoring into parents’ decisions.

The most common question from parents, Aguero says, is about safety protocols. How will they be screened, and what would trigger an emergency shutdown of a single class or the whole school? But with little guidance yet from TEA on these issues, Marfa ISD is still figuring it out.

Another common question from high school parents, Aguero joked at a meeting on Monday evening, concerned the senior tradition of painting the street outside of Marfa High.

“We’re not going to let [the pandemic] stop us from doing that tradition,” he said — though social distancing requirements might still change the logistics.

A few parents turned out for the meeting on Monday evening. Among them was Ellie Tejada. Her son has asthma, and he’ll be starting his senior year in the fall.

Noting that her son often got “really sick” in the winter, she said she planned to keep him at home. “I’m really scared,” she said. “I just don’t want him to get sick.”

Also there on Monday was Starr Timmons, who had come with her two elementary-age school kids. Like Grajeda, she wants to keep her kids at home to “allow more space” for families who can’t, and “make the situation better for everybody.”

In a follow-up interview on Tuesday, Timmons pointed to poor hygiene habits of small children, as well as to the fact that children can’t always grasp the severity of the pandemic.

“Kids this age just aren’t as self-aware and mindful,” she said. “They know there’s this sickness, it’s called COVID, and they’re not allowed to touch things. But they don’t understand the gravity of it. They still have this element of innocence in their mind.”

With Timmons was Maria Medrano, the mother of Timmon’s partner, a caregiver for Timmons’ kids and a bus driver at the school. She told Aguero she wanted to help in any way possible.

Still, as a bus driver, Medrano said she worried that parents would blame her, for example, if their child sat next to an infected child and then got sick. But Aguero urged her not to put too much weight on herself.

“This virus has affected us all in some form or fashion,” he said. “If there has been a blessing to come out of this, it’s that we’re starting to listen to other people.”

As TEA guidance continues to trickle out, Marfa ISD has continued to work on its own plans. Perhaps the biggest development has to do with how the school day will be structured.

When possible, Aguero said, teachers will be encouraged to do lessons like reading and math outside, to help get kids more fresh air and space. And at-home kids will get the exact same itinerary, he said, so that parents don’t have to worry about kids falling behind.

As parents grapple with these issues, teachers and administrators are also having to stomach their fears about returning to school. “It may be that some of our older teachers are more at risk than our younger children,” said High School Principal Allison Scott. “For me personally, my husband is in a vulnerable group.”

Still, Scott said, many teachers were eager to come back to school. “I think they all want to be here,” she said.

Asked whether she and other teachers thought of themselves as frontline workers, she said: “Absolutely.”

“The school is often the heart of the community,” she added.

Eliza Barton, a teacher at Marfa Elementary School, is feeling “very” anxious about returning. She said that she much preferred to see students in-person and that online learning didn’t mesh with her teaching methodology as well. “But I think our priority should be life,” she added. “And I don’t feel like life is our priority at all.”

If given the option, Barton said she would teach entirely remotely — even though it didn’t fit as well with her style. “I hate every minute of staying at home and not being around those kids,” she added. But with the pandemic, “we’re all in an uncomfortable position. This isn’t supposed to feel good.”

Barton worried about her coworkers — many of whom, she noted, had health problems like cardiovascular issues. She worried about her students, whom she called “beautiful virus collectors.” And she was angry at TEA, who she felt was making everything more difficult for administrators like Aguero.

Federal officials have tried to reassure parents and teachers that, statistically, the risk of children dying is very minimal. Barton had heard estimates that as few as 0.04% of students nationwide could die.

Those might be small numbers, but “I hate those statistics,” Barton said. “They say 0.04% as if those aren’t real children.”