FAR WEST TEXAS — In West Texas, economic uncertainty – from an oil and gas downturn and a pandemic – has caused some real estate sectors to slow, but others are experiencing an unexpected boost. Commercial, residential and ranch real estate are being impacted differently across the Trans-Pecos region, and in Marfa, some attribute strong housing sales to outsiders looking to escape future health crises.

For the past five years ranchland sales have had an oil motivation, but as of this year, “I don’t think that motivation is there any longer,” said Dr. Charles Gilliland, a research economist at the Real Estate Center of Texas A&M and rural real estate expert.

“The name of the game for the past five years has been the Permian Basin oil play and there’s been a lot of activity for ranches being bought for water disposal wells and for fracking, sand and that type of thing, which provided quite a bit of activity at high prices,” he said. “With the collapse of oil prices, all of that activity seems to have just evaporated.”

“Things were probably too hot to not cool down at some point and all the brakes went on in April and May this year,” he explained. “It basically got a double whammy out here.” Gilliland said that coronavirus caused “a lot of people to freak out and decide to not do anything.” Then O&G dipped. In its wake, the total amount of acreage changing hands in West Texas has declined.

But in addition to a flagging oil economy up north, “there’s a lot of country for sale” in West Texas, “including the Brad Kelly property out there that’s hundreds of thousands of acres. There’s a plentiful supply – for anyone that’s interested – to target, and apparently not that many buyers that are interested at this point.”

Still, the phones are ringing, Gilliland said. There are buyers looking for a place to raise cattle, recreate or engage in wildlife conservation, despite any economic wariness.

“The long and short of it is there are people who do have funds available that are looking for those kinds of properties and they’re still out there,” he said, “and I’m told that there is quite a lot of activity in terms of people looking across, not just out there, but across a lot of West Texas.”

Alpine-based Paul Loeffler does farm and ranch and commercial appraising, working with banks and finance companies to assess properties’ market value. The market has been slow, according to Loeffler. In terms of sales, “There haven’t been any appreciable sales; there’s been a very limited number of sales in 2020. It’s probably off sixty-something percent since 2019.”

Loeffler said 20 ranch sales in any given year is “a pretty big year.” But he’s only seen two or three this year, “and I can think of more [sales] that have fallen through.”

“Is O&G causing the market slowdown in the area? The stock answer is, yes it is – but how?” Loeffler mused. “Is it because there’s no money in O&G for people to come down and buy recreational property, hunting property, a place to come hideout from the hustle and bustle from Houston and Midland? Maybe.”

Trying to predict the reasons behind the slowdown can be “very abstract in nature” the appraiser said. “Is it O&G prices? That’s likely. Is it COVID? Man, who’s got a crystal ball?”

A Texas Housing Insight report released for May 2020 by the A&M Real Estate Center revealed a growing shortage of affordable housing on the market across the state. Recently, the supply of active listings on the market fell to its lowest level in three and a half years, with months of inventory (MOI) falling to 3.2 months, and availability of homes priced under $300,000 sliding even lower, due to an increase in their sales.

Meanwhile, luxury housing (priced $500,000 or higher) was more available, growing to 7.6 months of inventory. Buyers are having a harder time getting financing for luxury homes, Gilliland said.

From their analysis, the disparity between luxury and moderately priced homes “exemplifies the shortage of affordable housing during a time when the rocky economic atmosphere may make lower-priced homes look more financially feasible to the potential homebuyer,” the report stated.

In Marfa, Bob Wright, a broker and owner at Marfa Realty, said for ranchland, it’s all of the small ones and “none of the big ones” selling at the moment. He said commercial interest has picked up too, with clientele mentioning interest in using it in ways relating to the art community.

And as for Marfa housing stock, “We’ve had a deluge of calls from places like California, New York and other places in terms of homes and commercial properties. The one phrase that sticks out is ‘Next time this happens, we’re going to have a place to run to,’” said Wright.

“Marfa’s pretty well known anyway, but it really captivated the imagination of people,” he said. Wright cited the access to culture and nature as boons to the housing market. As the report had explained, the supply of active listings was down. “If anyone were thinking about selling a home or property, with the interest we have and the number of inquiries,” Wright said, “now would be a damn good time to put it on the market.”

Even under a worldwide health crisis, Wright pointed to lifestyle changes that were advantages for potential Marfa buyers. “The majority of professions nowadays you can do over the telephone and computer. I think it’s made everybody wake up to what you can accomplish with today’s technology.”

Gilliland wasn’t as confident about the near-future of the real estate market in Texas in light of coronavirus. “I think all of the forecasters are sort of puzzled about what to say about that because essentially, I think most people had assumed by this time we’d kind of have this coronavirus thing under control and now it appears that’s not happening and we’re getting more cases.

“People are starting to reevaluate their plans. Long story short, we’re in a very uncertain situation at this point. I’m sure there are people placing bets that things are going to get better, but there are a lot more that are really very cautious at this point,” he explained. “We need to be careful and possibly anticipate that there’s another shoe to drop with the virus if they don’t get things under control.”

For now, the residential market in Marfa is still hot. “Marfa is a unique economy,” said Wright. “Back in 2008 when the economy went, the values and prices in Marfa didn’t change. It sat still, it didn’t drop at all.” He feels the same about Marfa facing challenges of economic insecurity now, as well as the oil and gas struggles in other parts of West Texas.

“Marfa is a bird of its own. Fort Davis, that market, is completely different, Alpine, the same way. When outside appraisers come in here, they find that out real quick. The same home in Alpine or Fort Davis won’t bring as much as it does in Marfa,” said Wright. “Which is good for Marfa.” 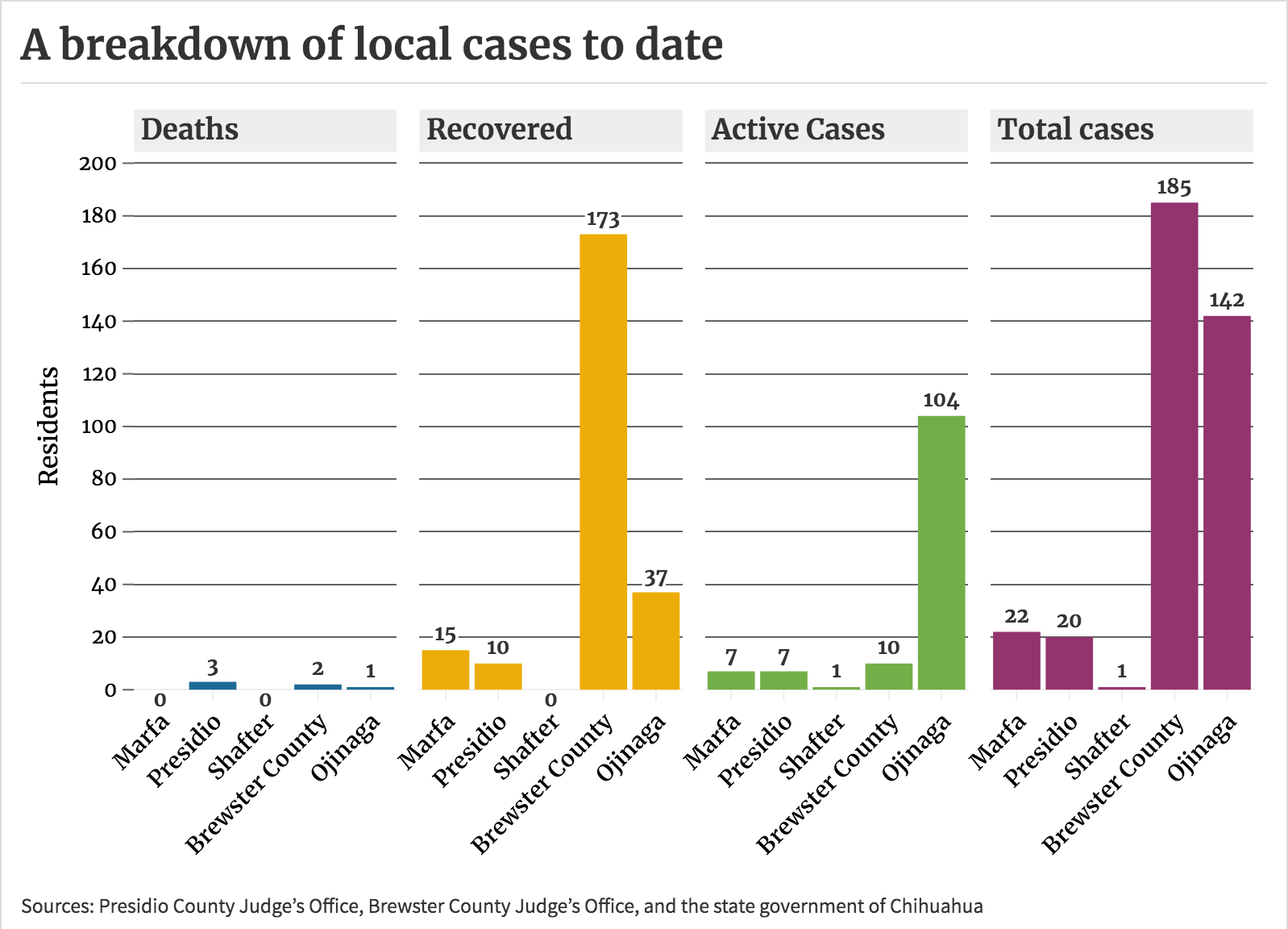