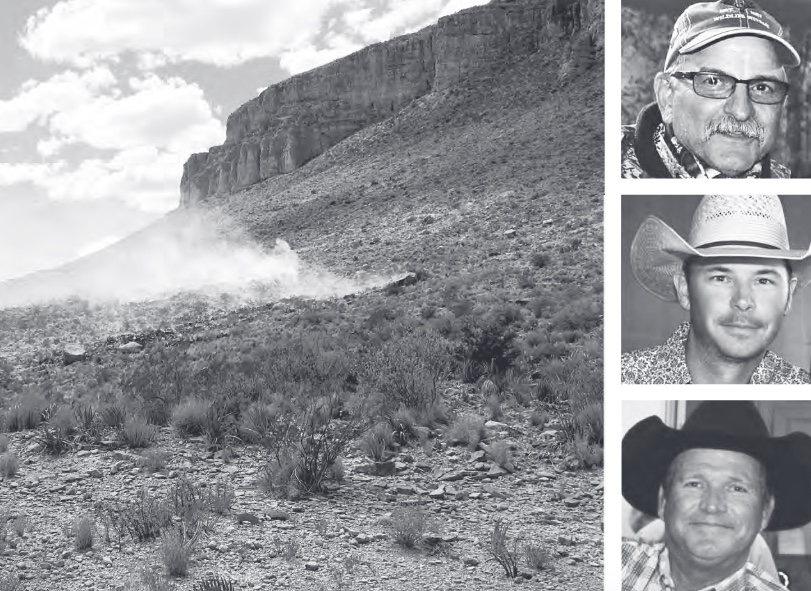 A helicopter carrying three TPWD employees and a pilot crashed in a remote canyon southeast of Marathon on Saturday. The cause of the accident has not been announced. The three victims pictured top to bottom: Dr. Bob Dittmar, Dewey Stockbridge and Brandon White. Photos courtesy of Brewster County Sheriff’s Offi ce and Texas Bighorn Society
Subscribe

As news broke, state officials offered their condolences to the families, with Governor Greg Abbott calling it a “tragic accident” and state Senator Pete Flores mourning the tragic deaths, stating, “They dedicated their lives to wildlife conservation in our great state and lost their lives doing what they believed in.”

“All I can say is that he was an amazing man,” Stockbridge’s wife, Shannon, said in a statement to The Big Bend Sentinel, adding that he was a “passionate biologist, caring father to our two children (Jameson and London), utterly devoted to his family, and was my husband, love and soulmate.”

Sheriff Ronny Dodson, whose department responded to the scene of the accident, said, “I send my heart out especially to Dewey and Brandon because I knew them personally.” With a wife and son in the veterinary field, Dodson also mourned for Dittmar (a Kerrville-based veterinarian) and his family. The sheriff remarked, “Our two local guys we knew, it really hit home to us and we’re saddened by the whole thing.”

“Wildlife conservation in Texas lost three of its finest as they so honorably and dutifully carried out their calling to help survey, monitor and protect the bighorns of their beloved West Texas mountains,”said TPWD Executive Director Carter Smith. “We will miss Dewey, Brandon and Dr. Bob deeply and dearly.”

Smith on Sunday said colleagues in Texas were mourning the accident. “These men were consummate professionals, deeply liked and highly regarded by their peers and partners alike for the immense passion, dedication, and expertise they brought to their important work in wildlife management and veterinary medicine.”

The crew was in the midst of annual bighorn sheep surveys that take place each August, usually involving helicopter flights over Big Bend National Park, Big Bend Ranch State Park and the Elephant Mountain and Black Gap Wildlife Management Areas, in efforts to control the competing population of aoudads and to count the growing number of bighorn sheep.

In the 1960s, the native desert bighorn sheep were extirpated – extinct in the area – and since, local wildlife experts like White, Stockbridge and Dittmar have helped diligently study, nurture and restore a population of bighorn sheep in the area, which now numbers more than 1,500 across West Texas.

“He was a fabulous veterinarian,” Dittmar’s wife Bernadine told San Antonio’s KSAT news this week, “but what drew him to Texas Parks and Wildlife was the bighorn sheep. He was involved in the relocation of them, and it gives us comfort to know that’s what he was doing.”

Texas Parks and Wildlife did not say whether surveying efforts would continue through August 16 as planned, but Tom VandenBerg, a BBNP employee, said the crew’s work in the national park on August 5 was a “very successful day.”

“They did a wonderful job. They removed a large number of aoudad from the national park and the day after that they were going to start doing that in Black Gap,” said VandenBerg.

It was during the Black Gap surveys that the Bell 206 helicopter crashed in a remote canyon area 47 miles southeast of Marathon, according to the FAA. The federal agency stated the point of departure and intended destination from that Saturday are still being determined and the helicopter’s tail number is still being confirmed.

Carter said, “All of us at the Texas Parks and Wildlife Department send our deepest condolences and sympathies to the Stockbridge, White, and Dittmar families in the wake of this devastating tragedy and continue to pray for the health and recovery of the pilot.”

The pilot and sole survivor, George Ezell, was transported to El Paso for treatment on Sunday and remains in the Intensive Care Unit in stable condition at the University Medical Center in El Paso.

Dodson hoped that the pilot’s survival would aid investigators in determining whether the crash was a mechanical failure or another cause. The incident is being investigated by the Texas Department of Public Safety, the Federal Aviation Administration, the National Transportation Safety Board and Texas Game Wardens. At this time the cause of the crash has not been announced.

The Texas Bighorn Society, an organization that partners with TPWD, set up a memorial fund for the families of the three victims, sending their deepest sympathies. “We will always be grateful to these men for their sacrifice and dedication to desert bighorn and wildlife conservation,” President Sam Cunningham wrote. As TBS is a 501(c)(3) organization, all donations are tax deductible and can be mailed to the TBS office at 1615 West Loop 289, Lubbock, TX 79416, online at http://www.texasbighornsociety.org/ or by calling 806-745-7783. The entirety of the fund will be distributed equally to the three surviving families.