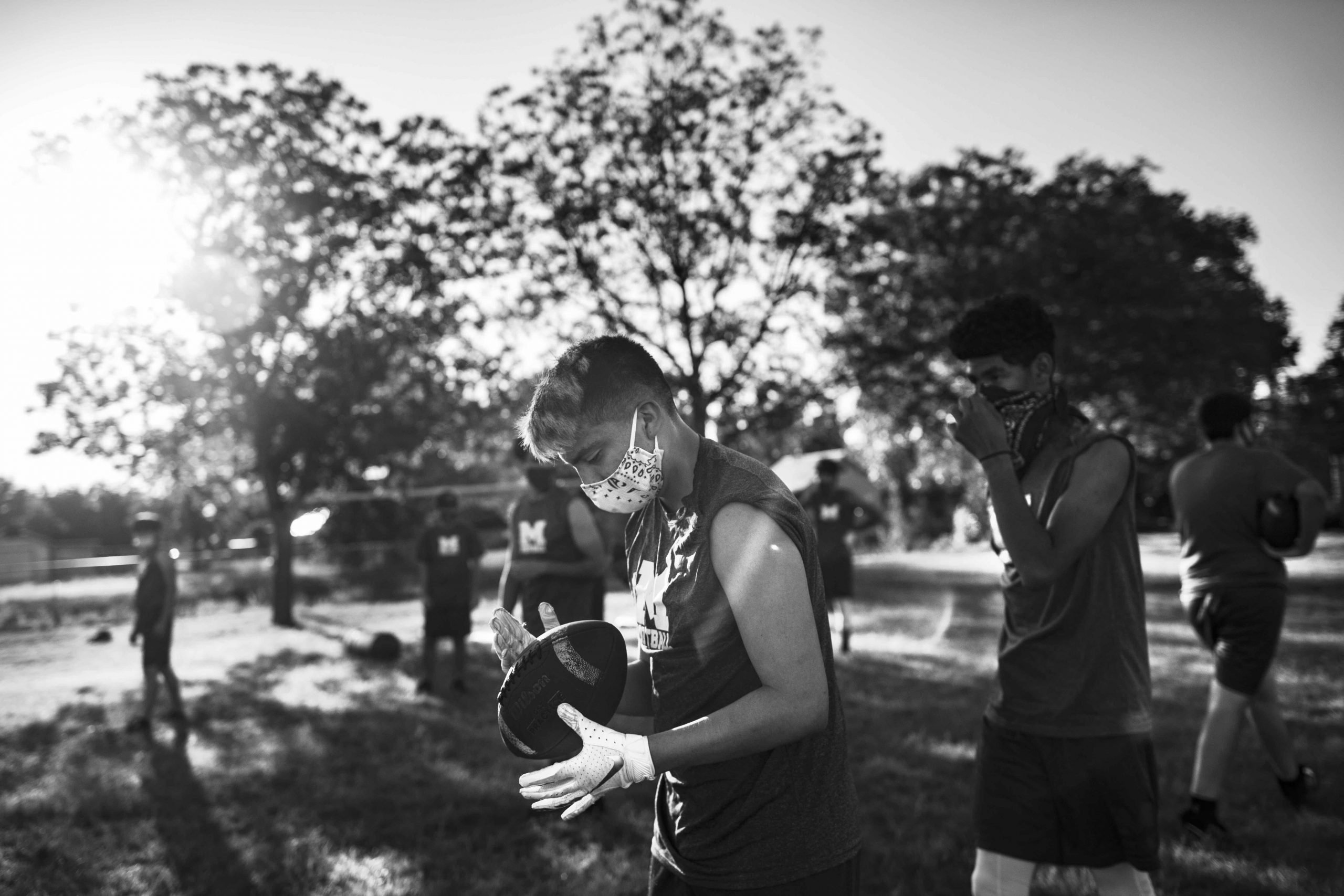 Johnnie Gomez tosses around a football at an early morning practice with the Marfa High School Shorthorns. The team is wearing masks on and off the field this year and hoping to have a full season of games ahead of them. Photo by Maisie Crow
Subscribe

FAR WEST TEXAS — The Marfa High School football team is charging ahead for another six-man football season, and the roster looks great, with 22 players (six more than last year) and a good shot at improving on their 2019 two-win season. Senior quarterback John Aguero said he is already feeling “optimistic.” But there are a handful of obstacles ahead that may prove challenging for the Shorthorns, and the team is preparing as best as they can.

Practice began on a Monday in early August, “but we had to shut down on Wednesday,” said Head Coach Arturo Alferez. “We found out one of our students had been exposed to the virus, or, been around it,” when the student attended a gathering with some who eventually tested positive for COVID-19.

The district had the facilities sanitized, the team stayed home for 72 hours to monitor for any symptoms, and by the following Tuesday, August 11, the players were back on the field.

On the field last Wednesday morning, Alferez looked out at the team as they partnered up to practice passes. “We’re looking good. We are bringing back a little bit more speed to the game and more depth. If we stay 22 strong, then we’re looking at probably two or three guys per position.” And at least one girl, Clarissa Hernandez, decided to join this year.

The team is wearing masks, even on the field, as they practice. “It’s kind of annoying, it’s kind of rough, but you get used to it and it’s something you have to do,” player Dedrick Campos said. “It’s like a seatbelt,” Alferez said, saying it provides safety for themselves and others. He told the team, “If we’re running and spaced out, just bring your mask down, and if you need to take a breather, bring it down, take a quick breath and then get back at it.”

County health authority and local doctor John Paul Schwartz remained apprehensive about schools opening and about sports. While he is glad the teams are conducting practices to minimize contact, he told school officials he doesn’t agree with it.

In speaking to the district, Schwartz said, “Their idea is, ‘Well, it’s out-of-doors.’ But how can you have contact football and stay six feet away?” he said. “Unless they’re really working with the kids to educate them, it’s not going to happen. I don’t have much faith at all.”

On the field last Wednesday, students did have their masks on, though they occasionally pulled them down before placing them back over their faces.

Coach Alferez feels confident in the district’s precautions, saying he would be the first to raise concerns if he thought they weren’t doing enough to keep students safe. The team is taking temperatures before each practice and will space out on the long bus rides from Marfa to competitors’ stadiums to play. But so far, nailing down the competitors has been difficult too. Scrimmages have been canceled and games against Sierra Blanca and an El Paso team have already been postponed, since their districts delayed the start of practice until September.

“If other schools also do their part when it comes to taking temperatures, then I shouldn’t be concerned now. The moment we feel that a school is exposed, that’s something as a district we’re going to talk about to see what’s best for the kids,” he said.

“We’re hoping that everything goes well and that there’s no other interruptions,” said Alferez. Last week, team members asked the coach if they would even have a season as news of college football delays broke.

On the collegiate level, the American Southwest Conference, which Sul Ross State plays in, decided the fate of fall sports long before many major sport conferences across the country, announcing all fall sports for the conference were to be postponed until the spring semester.

As for what this means for the specifics of certain sports schedules, the ASC stated that the Men’s and Women’s Cross-Country Championships will be held Saturday, February 20, 2021. Additionally, regular-season division play for the football season will begin on February 6 and will last five weeks with eight teams in action each week. The schedules for men’s and women’s soccer and volleyball will be released the week of August 24.

Sul Ross State University Athletic Director Jim Goodman stated that he is not yet sure what such a busy sports schedule will look like for SRSU in the spring, saying that any kind of plan would still be in its formative stages.

Goodman did say that a plan was being developed that would be designed to promote the safety of each player and this would include practicing in smaller groups, sanitization zones and scheduled time slots for each team to be able to practice and work out while distanced.

When asked how bad the situation would have to be in the spring for sports to eventually be canceled, Goodman said that it is hard to look that far into the future and that it would be taken as it comes.

In regards to the financial impact that the cancellation of a full season of multiple sports would have on the athletic department Goodman simply said “no amount of money is worth the health and safety of our athletes.”

James Parker, a junior who plays defensive back for the SRSU football team, said it “hurt” when he heard that the season was not going to be played in the fall, but was glad that he and his team would have a chance to play in the spring and said he is keeping a positive mindset for what the unusual season will be like.

“Moving to the spring will just give us more time to get to know each other and interact with each other so we can create a bond before we step on the field together.” said Parker.

Despite SRSU football having their own locker room, they still have to share other facilities, like practice fields and weight rooms, with other sports. Parker said that during a semester where every sport is simultaneously in season he has worries about the practicality of that situation, citing the weightroom, which the school shares with the city of Alpine, as a perfect example.

Overall, Parker said that he feels comfortable on campus with the safety protocols that the athletic department and university have put together, but he is mostly worried about the logistics of what a packed spring semester would look like.

In Marfa, the team is still holding practices, conditioning and preparing for their first outing of the year. The Shorthorns will kick off their season on August 28 in Marfa, where they will face off against Grandfalls. The district is still discussing whether audiences will be permitted at games, and how big those crowds might be allowed to be.

Next generation 911 system in the works for tri-county region