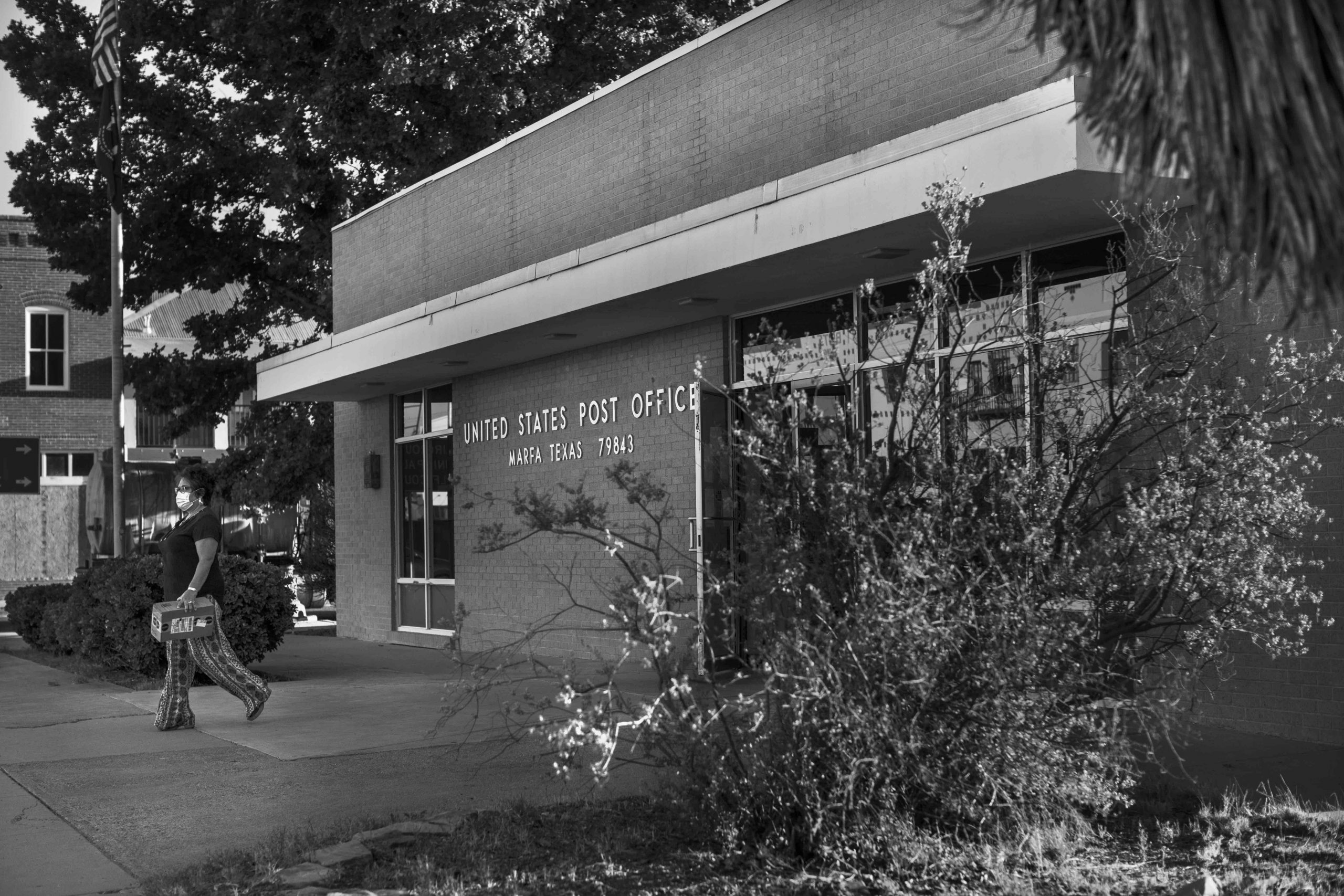 TRI-COUNTY — The United States Postal Service — and concerns about restructuring and cuts at the agency — has been in the news a lot lately. After chronic budget issues exacerbated by the coronavirus, the Postal Service in April warned that it was facing insolvency.

At press time, it’s unclear how or whether changes at USPS have affected local residents. USPS did not answer questions about overtime hours and mail volume in tri-county zip codes — and while The Big Bend Sentinel has filed records requests seeking this information, we have not received any records yet. USPS workers in the region also declined to comment for this story, citing USPS policy.

But in interviews with The Big Bend Sentinel, local election officials throughout the region outlined how they were preparing for the challenges of this year’s election, including a surge in requests for mail-in ballots. Despite the upheavals, local officials say they’re confident that mail-in and absentee ballots won’t be lost in the shuffle. And for added peace-of-mind, they also stressed that this year, locals are welcome to submit mail ballots in person.

Recent changes with the Postal Service have worried many Americans, particularly in rural areas where the post office serves as a lifeline for everything from receiving medications to sending orders out from small businesses.

In Texas, state officials have fought in court to limit vote-by-mail to only older and disabled voters. Since rural areas also skew older than urban ones, postal concerns matter especially in the Big Bend. Election officials in the tri-counties all said they were seeing a higher demand for mail-in ballots this year, compared to previous elections.

Lora Nussbaum, the elections administrator for Brewster County, has already received nearly 150 more mail-in ballot requests for the general election than she did for the primary, and her office is still months away from the October 23 deadline to request a mail-in ballot.

“The very first year I was in here, we had under 300 mail-in requests,” Nussbaum said this week. “Right now, we have a little over 400.” She stressed that requests have to be received by the October 23 deadline, not just postmarked by that date. “Requests can be dropped off, too,” she said.

To get a mail-in ballot, voters must first be registered to vote, with the registration deadline on October 5 this year.

In May, President Donald Trump appointed Louis DeJoy as postmaster general. DeJoy, a polarizing figure with no prior post office experience, has extensive investments in some of USPS’s top competitors, including the logistics company XPO, and has been a donor to President Trump’s campaigns.

On August 7, DeJoy modified the organizational structure of the USPS, “in an effort to operate in a more efficient and effective manner,” a press release announced. The move pushed out a handful of long time USPS leaders out, reassigning or replacing 23 executives.

“I am so concerned about the delays,” said Genie Mitchell, a member of the regional non-partisan Tri-County Voter Promoters. Anecdotally, Mitchell said she has “already noticed it in mail delivery that I get, so I would encourage people to get those applications in as soon as possible, make their plans now as to if they’re going to vote by mail or vote in person, or do it just as quickly as possible,” she said. “Don’t wait ‘til the last minute.”

Texas Senator John Cornyn denied any issues at the government agency, calling it a “non-scandal” in a Washington Post op-ed and a “conspiracy theory” in a TV interview this week. But another Republican representing the tri-county seemed to disagree. As the U.S. House of Representatives called a special reconvening this summer to address post office concerns, the tri-county’s congressman, Rep. Will Hurd, voted alongside many Democrats to authorize $25 billion to help the USPS handle the pandemic and upcoming election.

“USPS provides prescriptions, absentee ballots, cleaning products, birthday cards, a method to pay bills and so much more to the American people, and they’re doing this throughout the pandemic,” said Hurd. “America’s postal service is essential, and, like always, I will continue to support them.”

Notably, he also broke from the party line by calling for nationwide mail-in voting for all. “We should be making it easier to vote rather than putting up barriers,” the statement added. “Exercising our civic duty in unprecedented times requires unprecedented measures. The solution is for every state to allow voters to request a mail-in ballot due to COVID-19 health risks, not haphazardly mailing out ballots.”

Testifying before Congress this week, DeJoy said that he’d pause any further changes to public postal services (but not rollback the existing ones) until after the November election. But some experts feared the damage was already done, imperiling the federal government’s most popular program. Ninety-one percent of Americans view the USPS favorably, a Pew poll from April found, once again beating out every other federal agency.

Despite an increase in expected mail-in ballots, officials in both Presidio and Jeff Davis counties said they were already preparing for the election and were confident they could handle it.

“I’m not concerned,” said Florcita Zubia, a deputy county clerk in Presidio County who has for years helped out with county elections. She acknowledged that there would be challenges — from “more traffic” to the fact that county officials this year will also be helping with Marfa’s city elections — but said “sometimes the news can overemphasize what’s actually happening.” And in the case of Presidio County, at least, she didn’t think there was any cause to be sounding alarms.

Zubia encouraged people to call the county if they had any questions and urged residents to vote, whether via mail or in-person. The elections office can be reached at 432-729-4081.

“The way we speak out is through our vote,” Zubia added. “We have voting machines available, and they’re very user-friendly.”

Carol Truax, the deputy county/district clerk in Jeff Davis County, said much the same. While she said Jeff Davis County was also seeing an increase in mail-in ballots, she said adjustments were being made at the state and local levels to cope with any challenges. This year, for example, people can drop off mail-in ballots at the clerk’s office not just on Election Day, but at any point during early voting.

Truax also addressed another concern making the rounds: That people might vote by mail and never know if their ballot was actually counted.

Absentee voters can contact the clerk’s office at any time to make sure their ballot was received, Truax said. And in the case of a ballot that was received but also rejected, she said residents would be contacted by elections officials.

“Our post office does a really great job,” she added. “They’re very, very good.” Still, with added coronavirus precautions this year, she acknowledged that in-person voting this year may “take a little longer.”

Outside of county offices, concerns about the integrity of the Postal Service broke down along mostly party lines. Dan Dunlap, the Republican Party chairperson for Presidio County, said he had no concerns about USPS’s ability to handle mail-in ballots.

Clark Childers, the Democratic Party chairperson, said that while he was concerned about some of the issues at USPS, he didn’t want to “feed into the distrust of the USPS” and had “great faith in our local elections.”

“I encourage everyone to vote in the way they feel most confident,” he said. “The most important thing is to simply vote.” Still, he added that he “wished he had more faith in the capabilities of our postmaster general” and that he hoped “people will contact their elected officials and throw their support behind USPS” — an agency that, he added, employed more than seven million people overall, including more than 97,000 veterans.

And while the post office may not always make money, Childers pointed out that plenty of other government services — including the military — also worked that way. The USPS has unique challenges working against it: In 2006, Congress required the USPS to pay upfront for the next 75 years worth of pensions, an unusual requirement that critics say makes it virtually impossible for the post office to turn a profit.

“If all the other counties are getting mail ballots like I am, the post office is going to be very busy,” Nussbaum said. The Brewster County elections official was wary of advising voters how quickly they should return mail in ballots, though, afraid she might, “say it’s a couple days and then the post office doesn’t get it in time.” Brewster residents can submit their ballots directly to Nussbaum in-person anytime after receiving them in the mail. For Brewster County residents concerned about voting logistics, Nussbaum urged voters to contact her office directly at 432-837-6230.

In a short social media post this week, the Postal Service — without providing further details — sent a message to mail-in voters. “If you plan to vote by mail,” the post read, “plan ahead.”

For some residents, Brewster County health authority Ekta Escovar has been a calm and evidence-based voice throughout the coronavirus crisis, a homegrown version of Dr. Anthony Fauci.