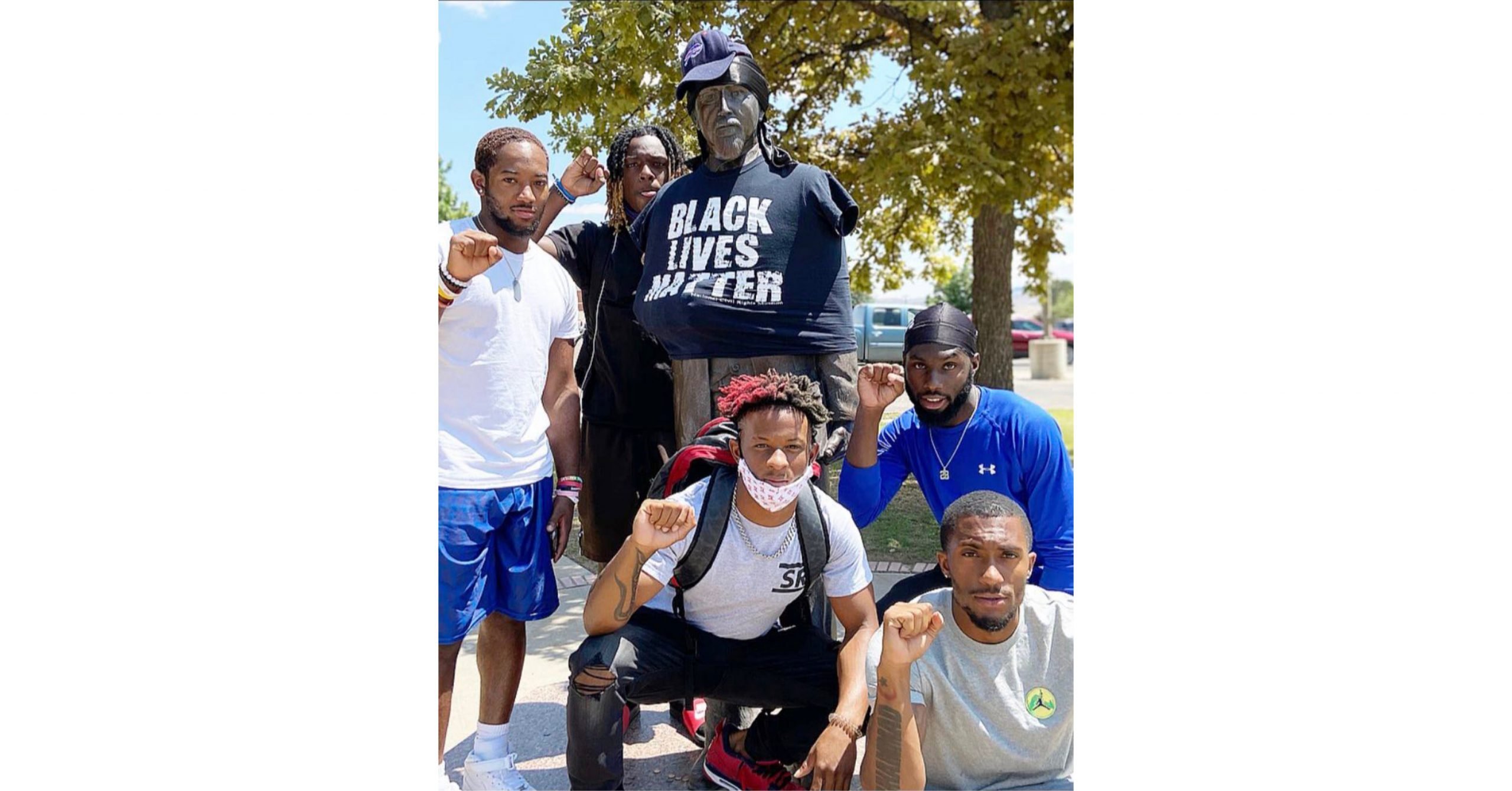 Sul Ross State University students dressed the Sullivan Ross statue in a Black Lives Matter shirt in late August. After campus police took down the display for violating school code, SRSU administrators ordered a variety of changes to support freedom of expression and discuss the impact of racism, marginalization and inequality in higher education and society. Photo by Malik Cannon
Subscribe

ALPINE — As many universities across the country have seen students coming together to protest statues of individuals on campus, Sul Ross State University is no exception. Lawrence Sullivan Ross, the namesake of the West Texas university, served as a general for the Confederacy during the Civil War and fought to uphold slavery. Because of this, his legacy, perpetuated through statues on A&M and SRSU campuses and in the name of Alpine’s lone university, has begun to sour quickly.

Cory McMahan, a football player and member of the newly formed Black student council, said that the football team has met multiple times over the summer to talk about the legacy of Ross. McMahan himself had this to say about attending a school named after a Confederate general:

“It’s hard to be proud of the school you are representing when you play, when you know someone like Sul Ross didn’t represent me or didn’t care about me,” said McMahan.

McMahan expressed that a lot of players on the football team were also conflicted about having to represent someone with a sordid history. Because of this, most of the team has agreed that they would like to have the Sul Ross statue taken down.

James Parker, also a football player and the president of the university Black student council, commented on the matter, saying he doesn’t know if he would have attended Sul Ross if he knew who Sullivan Ross was.

“I’m not proud of what he [Ross] stood for … so I’m all for his statue being removed, because if he didn’t stand for what was right, I don’t see the point of it being there,” said Parker.

Just weeks after returning back to campus, an incident occurred where students dressed the Sullivan Ross statue on campus in a Black Lives Matter shirt. The clothing was a violation of certain rules around school statues, which resulted in Sul Ross police taking it down. The school’s action aggravated some students, who said they didn’t feel that Sul Ross police or administration understood the scope of the situation, especially considering the recent events in Kenosha where an unarmed Black man was shot seven times in the back by police.

Because of the incident, a group of students led by football players and members of the Black student council at Sul Ross have started the “Alpine State University” movement.

At the center of this movement, which spread quickly on social media, is the goal of getting the school’s name changed from Sul Ross State University, which has been the name since its inception in 1917, to Alpine State University.

In response to the statue incident, university officials sent out an email addressing the situation, saying that Sul Ross State University is committed to ensuring a safe, supportive and inclusive campus environment in which all students are able to exercise their right to freedom of speech and expression.

Additionally, the university committed itself to a variety of actions. The Office of Diversity, Equity & Inclusion will start the first dialogues for students on all sides of the conversation to come together and speak about the issues at hand.

SRSU President Pete Gallego charged the Diversity, Equity & Inclusion committee with reviewing current guidelines and drafting a new policy regarding the Sully statue that protects students’ right to free speech on campus. Gallego also announced a faculty and staff virtual forum to discuss the impact of racism, marginalization and inequality in higher education and society.

The administration also said that they are willing to help raise money to fund a memorial dedicated to remembering the first Black woman to attend SRSU, to be located near the main mall of campus.

McMahan said that he was very happy with the changes that came from the meeting with administration, however, he did express that he wants to see continued commitment from the university to achieve the Alpine State University movement’s end goal.

“We would like to change the name of the school after removing the statue, and I think there is a good chance that there will be a change coming soon,” said McMahan.

McMahan said the movement gives him and his teammates a chance to express their emotions towards the name “Sul Ross.”

A decision on whether the Sul Ross statue will be removed has not yet been made. As for the name of the school, because of SRSU’s status as a state school, the institution would have to get approval from Texas legislatures to confirm a name change.

Black Student Council President Parker has said that he and others are working to organize a Black Lives Matter march on campus, but a date has not yet been set.