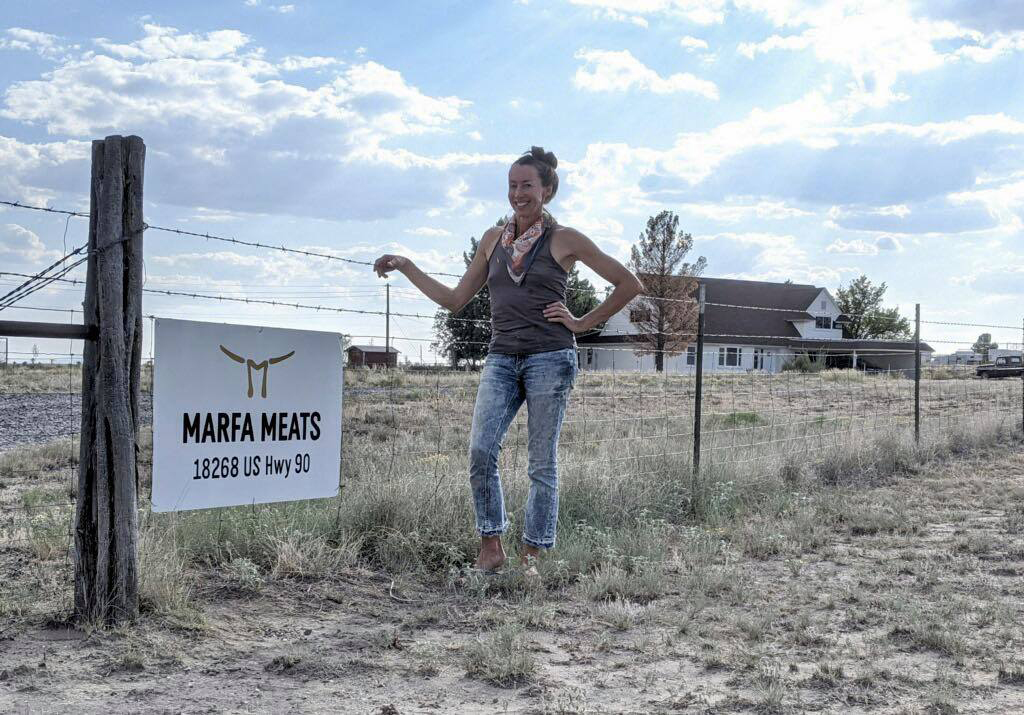 MARFA — It has been half a century since meat processing has had a home in Marfa, but a new project dubbed Marfa Meats hopes to bring back the industry, connecting local cattle with consumers. Hailing from Indiana, Christy Miller comes from a background not in ranching, but finance. She arrived in Marfa five years ago, has slowly planted her feet in town full time and now is undertaking a meat processing plant project on Highway 90, west of town.

According to the United States Department of Agriculture, almost 84,000 cattle called the tri-county home in 2017, and driving around the area, they are not hard to see. So last year, Miller started wondering, “Why can’t I get a local steak?”

On a hot afternoon in late August, Miller stood on her land west of town, recalling how exactly she came to the decision to learn the meat processing trade and make the big investment in launching a plant. The property, which boasts a house, some open land and a defunct tennis court, is the future home of Marfa Meats.

The first rancher she contacted was a cold call to Ellery Aufdengarten, Miller recalled. “He was just such a huge champion of mine,” she said. “He was the catalyst for me making connections with so many people in the ranching community that I didn’t know before.”

“I talked to so many people who were like, ‘Oh God, that’s going to be so hard,’ and ‘There’s so much regulation,’ or, ‘Oh, there used to be one in Alpine but they closed down – too much trouble.’” Miller said without early support, she might have given up.

Instead, she turned to Sul Ross State to discover whether she could stomach the more gruesome aspects of turning a cattle into a steak. At Sul Ross, she audited a class and was given the chance to watch, and then carry out slaughters in the Sul Ross Meat Lab. With hands-on experience under her belt, a visit to a processor in the Pacific Northwest bearing a mentality of using every part of the animal led Miller to marry the sterile processing plant with a more holistic approach.

While some plants throw away many parts of the animal, Miller wants to create opportunities downstream from her business, be it someone tanning leather or turning bones into dog bones. She plans to compost much of the byproduct on site.

She said Aufdengarten would remind her that the plant was needed and wanted in the area. Sales channels are limited for ranchers, who often sell to meat packing places or feed lots at commodity pricing.

Andrew Costello, a rancher in Marathon working on the Stovall Ranch, along with his business-minded girlfriend Kayla Duff, launched Big Bend Beef this year, selling cuts of meat directly to consumers. “I’ve been a rancher a long time and we’re screwed out of a lot of the profits, so we’re trying to make a little bit more off these cattle,” Costello said. While sending cattle to auction is “pretty easy,” Costello said, “feeding people feels a little better.”

“The issue for selling beef is, you hear about a meat shortage, but there’s not, there’s a processor shortage,” Costello said.

While Big Bend Beef relies on a processing plant almost four hours away in Uvalde, other operations closer to the tri-county include a processor in Fort Stockton, which offers custom processing but closes part of the year for deer season, limiting their capacity, and a plant in Mertson that is booked out until next August.

Costello said processing is a major stumbling block for his fledgling business. “We’re not even sure if, after all is said and done, we’re going to be successful, because of how far away we have to travel for processing.” The nearer Fort Stockton processor offers custom processing, which, unlike USDA-inspected processing, cannot be resold. “That’s why we travel so far. We’d love to do it local.”

“People won’t have to wait a whole year to process their cow,” Miller said. “Especially out here, if you need 35 acres for a head of cattle and it stays on the grass for a year waiting to be processed, it’s grass another cow could be eating.”

At Marfa Meats, Miller plans to have the federal and custom certification, so that she can process meat for local ranchers’ personal use, businesses can resell their meat, and so she can launch her own meat subscription service. That meat subscription will cater in part to tourists, who Miller wants to participate in the local ranching community in a more meaningful way, hoping “that they’ll leave town with more than a hat.”

Her operation will not be huge, with her facility able to hang, at most, 90 carcasses at a time. She plans to start with at least four employees, bringing jobs to the area and, she hopes, helping create work for Sul Ross students interested in pursuing meat processing after they graduate.

She hopes to eventually open the doors for a butcher shop and have community-supported agriculture through a garden on site. For now, Miller is working on the layout of pens and awaiting the delivery of the prefabricated modules for harvesting, a carcass cooler, a cut and pack and a finished goods cooler, all destined for the site of the old tennis court.

“We are in this unique geographical place that makes so many things complicated,” said Miller. But with local processing, she said the story is easy to tell. “It was raised here, processed here and now it’s going straight to you. It’s creating a simplicity that has been eliminated from so much of our lives.”