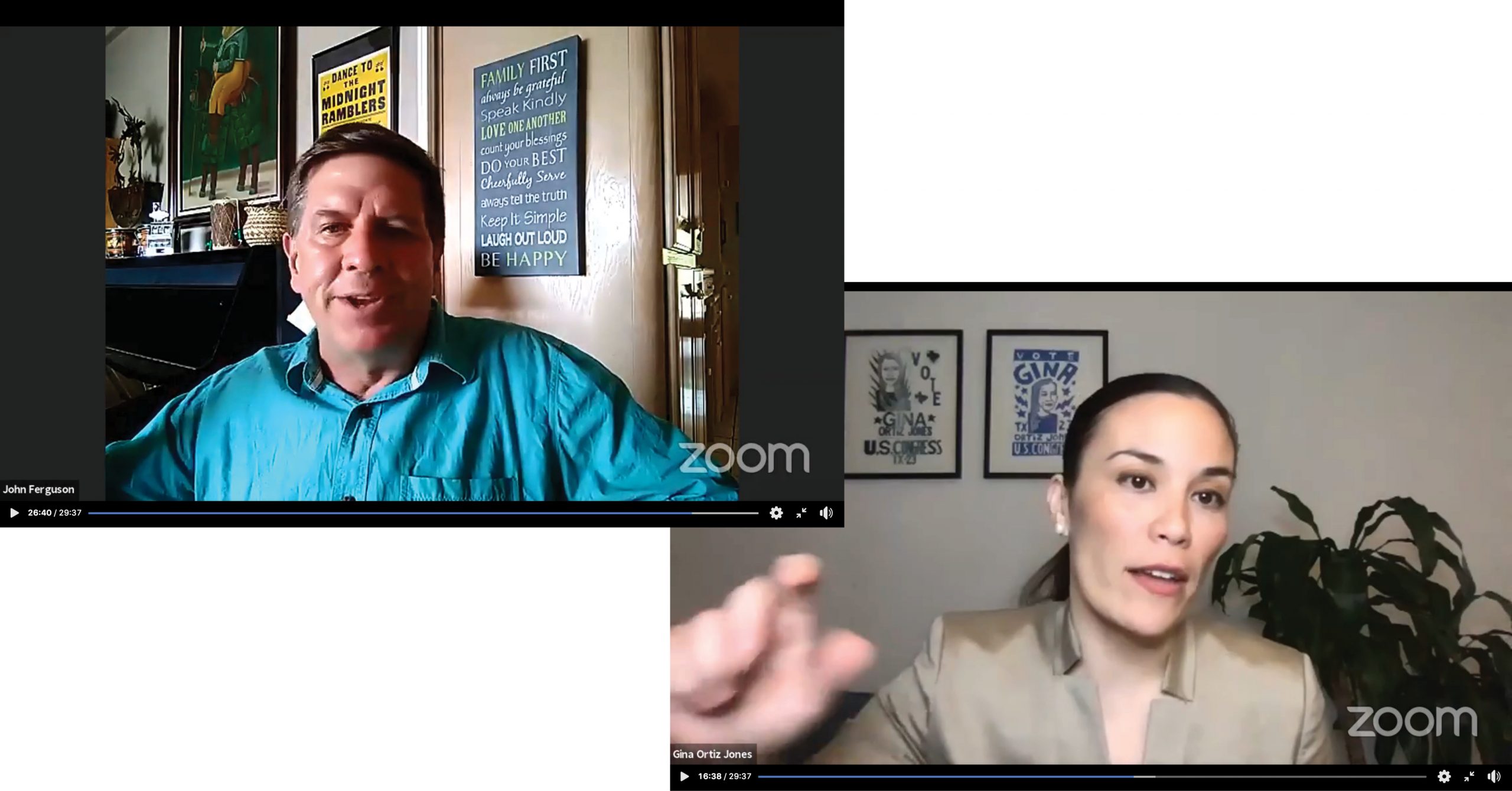 PRESIDIO — Last week, Presidio Mayor John Ferguson joined Democratic candidate Gina Ortiz Jones for a virtual town hall on “fighting for rural Texas.” Ferguson shared some of his largest looming concerns and highest hopes for Presidio, and Jones discussed some of her own plans for the town should she win the election this November.

Healthcare was the first topic of discussion, and given the current public health crisis and a persistent lack of residents in the area being insured, it was a top concern for both politicians.

“One of the things that we’ve been concerned about is the lack of access to testing,” Ferguson told Jones. He said the community has to wait for the state to provide testing, and during a month-long lapse in testing this summer, “people were getting pretty nervous. When it did happen, we went from 20 to 50 cases overnight.”

“You’re getting a sense of how each community is being served,” she replied. “It’s unfortunate because our medical experts have said time and time again that the key to getting this under control is being able to test,” she said to Ferguson at the townhall.

“I think it gets to the heart of why we need new leaders. You can’t forget about communities just because it’s only 4,000 folks or because it’s far,” she said. “You’ve got to have folks at the state level and federal level asking why aren’t we making these investments.”

Jones decided to have an event focused on Presidio, despite it representing only a small portion of the wide ranging, 29-county district of TX-23, in part because, “We can’t leave Texans in any part of this district behind, whether you live in a small town like Presidio or a big city like San Antonio.” In an interview this week, Jones pointed to another recent shortage of state-led testing in the tri-county as an “unacceptable” condition in the area.

Jones linked a lack of healthcare access to the challenges of getting broadband to everyone in the district. “It’s a district that unfortunately does not have a strong enough, consistent enough broadband connection in many parts to fully realize things like telemedicine, telepsychiatry, telehealth.”

Businesses across the U.S. are coming up with new strategies, she said. With remote work being more acceptable and with many reconsidering where to headquarter their businesses, Jones feels that without broadband and healthcare access, places like Presidio will be overlooked by businesses as a great place to run their business.

“These are communities that have got the talent, but we’ve got to make sure we’re fighting for everyone and making the smart investments around the rail bridge, around eco tourism, or bringing broadband to Candelaria. You’re not going to tell me that in the richest country in the world, in a state with a $1.8 trillion economy, that we can’t lay down fiber so that kids in Candelaria can have broadband,” Jones said.

Tapping into the economic opportunities of the Presidio Port of Entry is a close second to healthcare in terms of Presidio priorities for Jones. Ferguson shared that the vehicular bridge was seeing construction on the Mexican side, which has said it will be completed by the end of the year, opening up the flow of traffic and trade further.

“Mayor Ferguson and I don’t have a conversation without him reminding me just how much he wants that port of entry to be ag certified,” Jones remarked with a laugh at the townhall. With unemployment in Presidio now at 14.2% according to the latest data from the Workforce Solutions Borderplex, new jobs in trade, agriculture and energy would be a big help, if they can be secured.

“When you look at a map, that port of entry is critical. It’s the gateway for the energy that comes out of the Permian Basin, but also all that ag from Fort Stockton, Pecos, Reeves County, all of that. That’s a great avenue to facilitate trade between the U.S. and Mexico and is a great source of revenue for Presidio,” she said.

Ferguson has officially endorsed Jones, saying she is someone “who is in touch with the needs of our community, and somebody we can depend upon if we need to call Washington – somebody I believe would have a sympathetic ear to what we’re trying to do.”

Jones is facing off against Republican Tony Gonzales for a shot at outgoing representative Will Hurd’s seat. To Ferguson, Jones’ visits to Presidio “mean something to us out here, because a lot of times we’re considered to be too far flung or traditionally vote democratic, so candidates are like ‘Oh, let’s focus somewhere else.’” The mayor said he welcomes a visit from Gonzales as well, noting he very well could be the next representative elected come November.

TX-23’s Republican candidate Gonzales has visited the tri-county, going to Marfa and Redford twice – in September 2019 and February 2020, a campaign representative said, adding that he is working on additional West Texas travel now. This week, he received the endorsement of Governor Greg Abbott.

As for Jones, she said her campaign has a Big Bend area virtual meet-and-greet on Saturday, October 10, and is planning more events between now and Election Day to mobilize voters throughout the tri-county region and across South and West Texas.