For Chinati Foundation’s 2020 Virtual Weekend we too are opening our archives to bring to life Marfa’s history and the role the integral Foundation has played in the town. 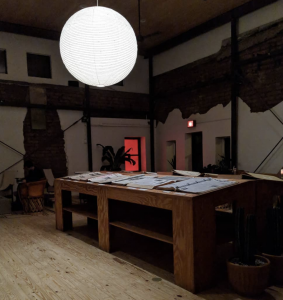 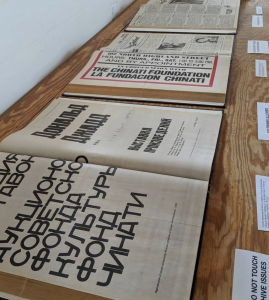 2019 Chinati Weekend archive layout for Made in Marfa. 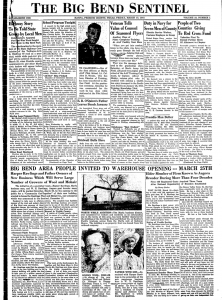 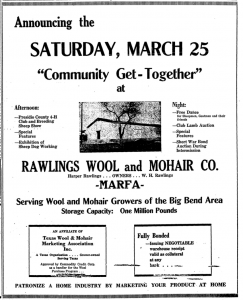 Now home to the permanent installation of works by John Chamberlain, the Rawlings Wool and Mohair Co. opened in March of 1944 with a sheep show, exhibition of working border collies, a war bond auction and a free dance for sheepmen, goatmen and friends. The space held one million pounds of wool and mohair.
(The Big Bend Sentinel, March 17, 1944) 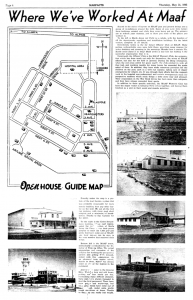 During the world wars, Marfa was home to Fort D.A. Russell and the Marfa Army Air Field. Marfacts was the local army-issued newspaper. In 1945, as World War II neared its conclusion, Marfa’s fort and air field began to draw down as part of the U.S. demobilization. In this issue, the paper bids farewell to those who lived on the base. The land was subsequently subdivided and sold, making way for Donald Judd’s arrival and purchase of much of the fort’s acreage and structures, which the Chinati Foundation now calls home.
(Marfacts, May 31, 1945) 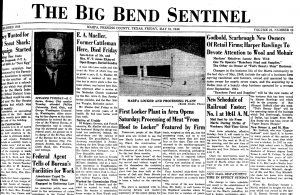 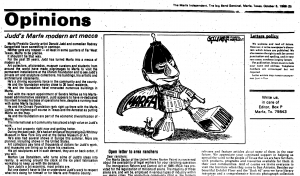 In this issue, The Big Bend Sentinel’s editorial board opines that Judd’s influence in turning Marfa into a mecca of modern art isn’t getting the respect it deserves. The opinion piece credits Judd as a “driving economic force in the community” and applauds his dedication to the area. Museums are lining up to show his work, and collectors are snatching up his art faster than it can be produced. It concludes, “Sure Judd’s a bit eccentric, most artists are. But one doesn’t have to like or understand Judd’s work to respect what he’s doing for himself or for Marfa and Presidio County.”
An adjacent cartoon by local cartoonist Gary Oliver shows Marfa shooting itself in the (Judd block) foot.
(The Big Bend Sentinel, October 5, 1989) 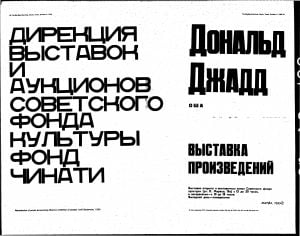 A poster announcing the Moscow exhibition of works by Donald Judd (Дональд Джадд) is reprinted by The Big Bend Sentinel. The poster includes a reference to “МАРФА, ТЕХА́С,” a Cyrillic transcription of Marfa, Texas.
(The Big Bend Sentinel, October 4, 1990)