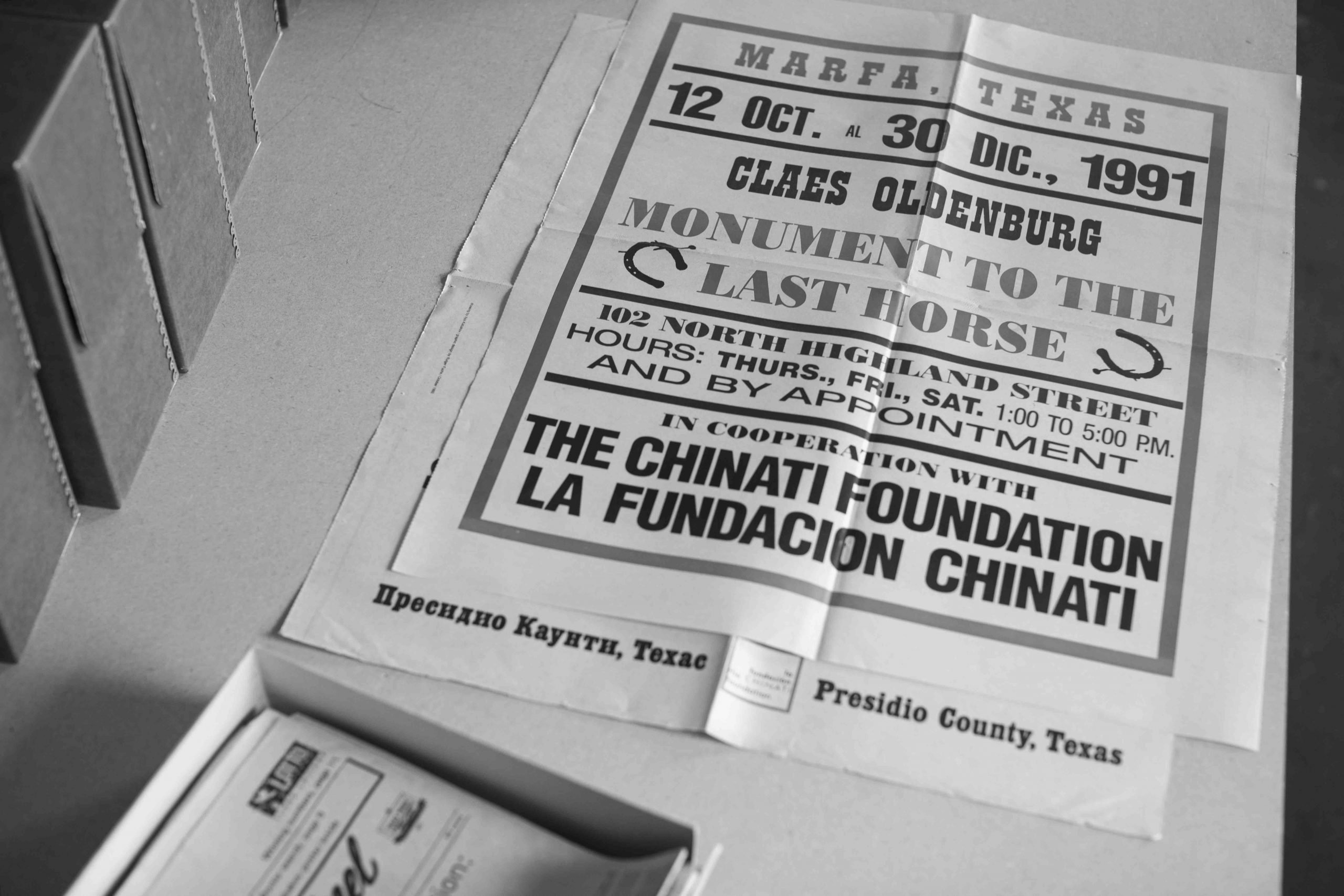 From the archives at the Chinati Foundation, a poster from Chinati Weekend in 1991 announces the unveiling of the Monument to the Last Horse. While Chinati Weekend 2020 is fully virtual, the Big Bend Sentinel is diving into the foundation’s archives, the education program and the history of Chinati Weekend itself in this special art edition. Photo by Maisie Crow
Subscribe

MARFA — For decades, artists and employees at the Chinati Foundation would generate paperwork. As it stacked up, it would be swept into boxes and stashed away in Apartment 14, a room built into one of the barracks at Chinati Foundation in Fort D.A. Russell. While those who had been around long enough could point you to the box you were looking for, as decades passed, staff turnover meant much of Apartment 14’s contents were unidentified storage to be rifled through from time to time.

Hidden among the bank boxes, folders and stacks of paper in the dim apartment and storage closets are ephemeral treasures by Donald Judd, documenting the period where he worked through the creation and growth of the Chinati Foundation. Also in the apartment are jottings and ideas from artists in the collection and documents that reveal the history of the institution itself, through project plans, artist-in-residence applications, local newspaper clippings, financial documents and much more.

It was the completion of the foundation’s master plan in the late 2010s that uncovered a need to process the archive. The foundation and Executive Director Jenny Moore applied for a grant from the Mellon Foundation and received funding for a two-year project from April 2019 to April 2021 to process Chinati’s paper archive.

It’s Hannah Marshall’s duty to sort it all out. Marshall initially moved to Marfa to work remotely for an archival software company – fortuitously, it was around the time the foundation began its search for its first ever full-time archivist. She took the job as archivist and, with the help of archives research fellow Hannah Yetwin, has spent over a year and half in Apartment 14.

As the pair sifts through 1,000 feet of physical paper, they are identifying items, categorizing them, conserving them and making them searchable for future use by scholars and the curious.

At the same time as they handle the physical, they’re also building a database that’s a guide for the collection. Items are sorted into individual record groups, and then the duo writes “finding aids” which help researchers learn what the collection has, including relevant history and the scope of the records. “You’re creating a lot of order where there wasn’t any,” Marshall said.

“A record group in our archive would be ‘the records of Donald Judd,’ and within that there’d be a series for the artillery shed, milled aluminum, the works of concrete. Here everything revolves around the art,” Marshall explained.

Among the records, Marshall has unearthed a draft of an unrealized book made by Judd and Coosje van Bruggen. Written on the cover of the assemblage is “Donald Judd, Drawings: Free Standing Concrete” and the ensuing pages of the book dated from 1990 are filled with scanned drafts of the concrete works, taped in place, revealing an order of creation that Judd saw as important.

“It’s clear they were trying to get a feel of what this book would look like if they made it, and it never got made,” said Marshall, “but I find it to be this charming and thoughtful document that is also, when you look through the really shabby mock up, it’s a really important document of what he thought was an important sequence of images to see to understand.” In it, there are sketches for configurations and units that never happened, she notes. “It’s such a great, weird thing to come across.”

Marshall also called it “unbelievable timing” that last week she came across the handwritten speeches of Rudy Fuchs, a Dutch curator, early board member of the foundation and friend of Judd. The timing was notable, as the speeches were from early years of Chinati Weekend, which begins this year on October 9.

There is an archival photo of Fuchs delivering one of the speeches, and Marshall had heard they were legendary, but with no recording, it was unknown what was said in those early days of Chinati Foundation.

“He’s delivering a speech in that picture, and these are the handwritten drafts of one of the speeches he gave,” she remarked as she carefully showed the paperclipped speech, stored in an archival sleeve. “He’s a beautiful writer so his speeches sort of bring a tear to your eye,” and through the archiving project, those speeches will later be available to the public.

Even on more benign, day-to-day documents, Judd’s distinct handwriting is visible, and his doodles and marginalia dot the archive. A sheet of paper from 1981 shows Judd sketching out a concept for a postcard – with a big rudimentary sun drawn in the top corner and sky taking up the large sum of the page. Written on it is a message inviting people to visit Chinati, back when he could sum up the collection by writing, “Two works by Donald Judd, paid for by the Dia Art Foundation, are placed permanently at Fort Russell, Marfa, Texas.” It was a message recording the early era of the Chinati Foundation as summed by Judd himself.

The Mellon Foundation grant is purely for the paper records, meaning records that have been generated in the last decade, like emails and digital design documents, are not included in the scope. Marshall said cataloging digital files would be a “next phase,” as would be any plans to digitize media like photos, film or slides. But Chinati is already looking ahead to the next phases, which would catalog other media, and collect stories, images and ephemera from those in the community and those with longstanding connections to the Chinati Foundation.