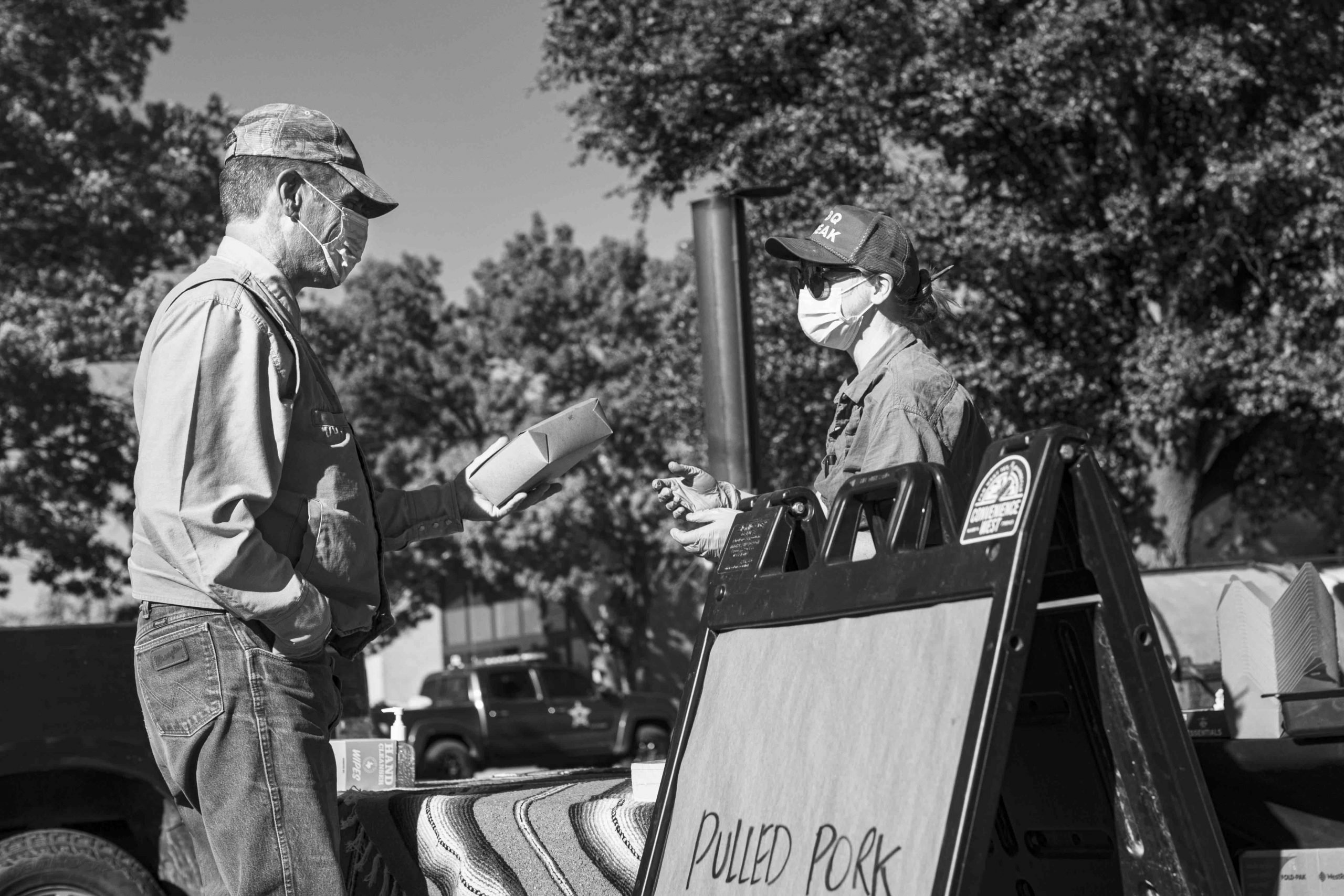 Marfa voters lined up on Tuesday afternoon to get free Election Day barbecue from Convenience West. Organizers hosted the BBQ in front of Marfa’s polling place on Tuesday with the goal of further drumming up interest in the historic 2020 elections. But judging from interviews with residents, it was the stakes of this election — not the free sandwiches — that ultimately drew Marfans to the polls. Photo by Maisie Crow
Subscribe

MARFA — When local organizers put on a free Election Day barbecue outside the Marfa polls on Tuesday, they hoped to drum up further civic participation in this year’s historic elections. But judging by historic turnout numbers and interviews on the ground, it didn’t take delicious sandwiches to bring voters to the polls this year.

Passions ran high this year, and in the end, both Donald Trump and Joe Biden earned more votes in Presidio County than was the case in 2016. Polls showed a tight race in Texas — and for the first time in generations, outside observers turned their attention to the Lone Star State. But as The Big Bend Sentinel also reported this week, Texas stayed red — dashing Democratic hopes not only for change in Texas, but for a landslide election nationwide.

Of the locals who spoke to The Big Bend Sentinel and were willing to reveal who they voted for, every one of them voted for Biden. That’s a reminder that Presidio County is a solid-blue stronghold, but it could also be a sign of what experts call “shy Trump voters.” Studies show that Trump voters are far more likely than Biden voters to hide their true opinions when speaking to journalists and pollsters.

Among those new Marfa voters were Sam Salazar, 23. Salazar didn’t vote in 2016, but she had been drawn into politics by the “chaos” of the Trump presidency, she said. In October, she wrote a letter to the editor. In her bilingual letter, she complained of a “massive disinformation campaign to make us confused [and] discouraged” and offered to help other Marfans navigate the election process.

Salazar voted in 2018 for the first time. This year, she said she got 10 other people — including friends and family who had never voted — to also participate in the elections.

All of which begs the question: How did they vote? “Blue all the way down,” Salazar said.

Also at the barbecue was Gabriel Chavarria, 21, wearing a leopard-print mask and carrying a puppy. At his age, this year was the first chance Chavarria had to vote in a presidential election.

Chavarria voted for Biden. Like others, he had heard the talk of Texas finally turning blue. Still, he was trying not to get his hopes up. Trump’s election in 2016, he said, showed him that “a white man with money can get anywhere in this country.”

Not all voters were so keen to share their political opinions. John Williams, a Marfa resident since 1960, at one point showed up to pick up a barbecue sandwich. He wore a baseball cap with a message: “Make Marfa Texas again.” Asked about the hat, Williams cited rising housing prices and Marfa’s transition to a hip, young tourist town.

In Marfa, Williams said, there had been “an influx of people that aren’t interested in local people.” He voted on the first day of early voting, though he didn’t want to say for whom.

Not long ago, “policymakers viewed broadband as a luxury,” one advocate said. "Now, especially with the pandemic, we’ve seen it’s truly critical infrastructure.”